The changing coronavirus rules in real life continue to wreak havoc on soapland’s hostelries. Where pubs were once packed, now there are never more than a handful of people in them.

You have to feel sorry for people who make their living as extras. There was only one in Corrie’s Viaduct Bistro yesterday, socially distanced from Gary and Ray and with his back to camera. In fact, he might as well have been a mannequin for all the movement he made.

The pub was very strange, with Gary coming in with a mask, and Ray and Jenny without one, while Johnny was the only person in Roy’s Rolls wearing one.

As for Speed Daal, the staff continue to outnumber the customers by three to one – actually, make that three to none – but then it’s never been that different.

The Queen Vic in EastEnders looks emptier than the set of Waiting For Godot, and Emmerdale’s coffee shop is now outdoing the Woolpack in terms of human traffic.

Will it ever end? That’s pretty much what everyone asks during Waiting For Godot, by the way. 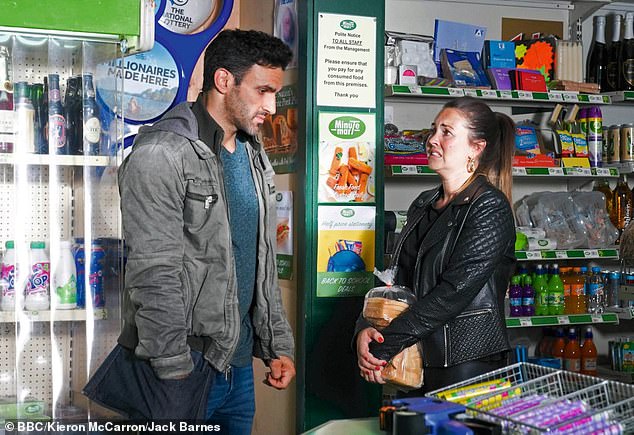 In this week’s EastEnders, Stacey confides in Kush (pictured) after receiving something unsavoury in the post that she believes is from Ruby

Many unsavoury things have been posted through the locals’ letterboxes, but Stacey is not prepared for the latest one that pops onto the mat (clue: it’s not a complimentary ticket to a local spa).

Confiding in Kush, she assumes Ruby is behind the delivery; he assumes it’s a warning about his debts. Whichever it turns out to be, it’s another excuse for Our Stace to don one of her distressed faces, like a rabbit finding that Tesco has just sold its last carrot.

There is worse to come when, en route to confront Ruby, Stacey is attacked.

This leads to a rather bizarre series of events clearly destined to create a whole new set of problems. Fear not, though; no rabbits have been harmed in the making of these episodes.

Callum is another one with a permanent look of worry about him; it’s inconceivable that Phil wouldn’t have picked up on it. Callum looks shiftier than Judas leaving a bank carrying 30 pieces of silver, and it’s likely to get a lot worse with DI Thompson on his back.

At least Sharon and Ian make up after weeks of aggro. Please tell me that doesn’t mean what it usually does. Two rabbits.

CORONATION STREET: FOR BETTER, FOR WORSE 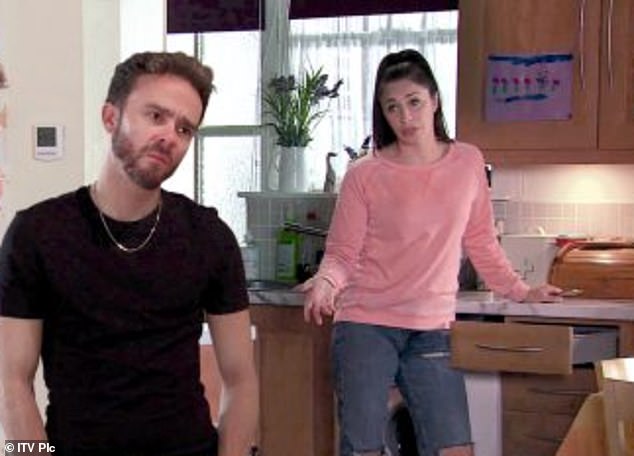 David worries about Shona (pictured), after Aaron says he’s reducing his hours with her in Coronation Street

How long can David cope with Shona’s erratic behaviour (let alone those jeans – does she have nothing else to wear?)?

Tipping drinks, inviting builders over for Gail’s finger food, shaving heads… he excuses everything and says it’s because her condition means she has ‘no filter’; but when someone like David questions your actions (he’s tried to kill two family members – that we know of), you’re not only in deep water, you’re drowning.

When Aaron says he’s reducing his hours with her, David is worried.

He reassures her, convinced they’ll find ‘the old Shona’ again (er, wasn’t she a lying thief with a killer son? I’m not sure the Shona of two years old, let alone two years ago, is one you ever want to find).

It was an exciting week for Billy, who received a call from the Bishop, recommending he apply for the Archdeacon job – not bad for a man who can’t find his way to church without sat nav.

But with Todd back, what does it mean for his future with Paul, who is increasingly worried that Billy merely settled for second best?

Why can’t either of the men persuade Billy to shave off his beard? He’s so good looking, with stunning eyes; the beard increasingly looks as if it’s eating his head whole.

EMMERDALE: TAKING ONE FOR THE TEAM 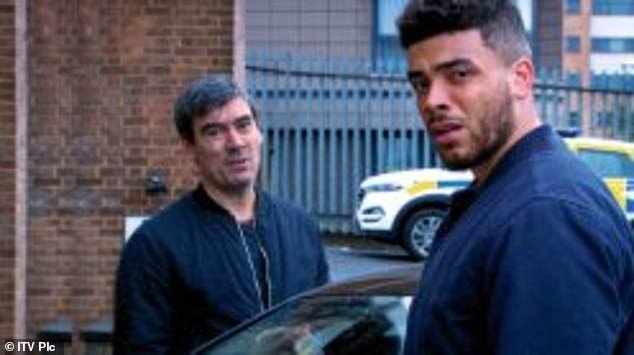 Nate offers to take the rap for the hit-and-run, when he hears about Belle’s history in Emmerdale. Pictured: Cain with Nate

Poor Belle is now hearing Lisa’s voice, telling her not to take her pills. It’s a reminder of the devastation schizophrenia can create, but at least the fashionably challenged Lisa isn’t advising her from beyond the grave on what to wear.

When Nate hears about Belle’s history, he offers to take the rap for the hit-and-run, but when he arrives at the police station with Cain, will he follow through after Tracy discovers his plan?

Will Cain and Moira’s efforts to gather evidence against Jamie reunite them when they break into Home Farm? Why not. A pint of lager usually does the trick.

thegirlsunhttps://thegirlsun.com
Previous articleJames Bond film No Time To Die will NOT feature 007 in pre-credits action for first time in 50 years
Next articleCancer survivor, 10, thanks the 'kind' hospital play worker who made her feel 'safe'

They are preparing for the first ever UK version of I'm A Celebrity... Get Me Out of Here amid the COVID-19 crisis.And Ant...
Read more
Tv & Show

Molly Mae Hague has revealed that further surgery on her leg will take place next week - and that she is devastated the...
Read more
Tv & Show

Ashley Cain has revealed his daughter Azaylia was turned away by doctors three times prior to her leukemia diagnosis. The Ex On The Beach...
Read more
Tv & Show

Coronation Street SPOILER: Craig Tinker is shot and Jenny is in danger amid horror armed robbery

An ISIS propaganda outlet has published a gruesome picture showing the severed head of the French school teacher murdered on Friday, after his...
Read more

Google unveiled its dramatically redesign Chromecast during its Launch Night In showcase, which was held at the end of last month. While the...
Read more

They are preparing for the first ever UK version of I'm A Celebrity... Get Me Out of Here amid the COVID-19 crisis.And Ant...
Read more

And evidence suggests some sort of sonic weapon could also be responsible for the illness, which has affected than dozens of US officials...
Read more

Woman suffering from endometriosis reveals how condition left her suicidal

A British woman has revealed how her battle with endometriosis left her feeling suicidal because the thought of 'not living was so much...
Read more
Health

Alongside a fever and a cough, one of the key symptoms of Covid-19 is losing the sense of smell. In some cases, it...
Read more