Old Faithful, Yellowstone National Park’s famous geyser which has erupted continuously for the last 800 years, could have fewer eruptions or go quiet altogether within decades due to the effects of climate change, scientists say.

According to the latest findings, Old Faithful went dormant for some 130 years during the medieval era due to severe drought conditions.

Researchers said that the geyser stopped erupting long enough to allow trees to grow in the area between the years 1230 and 1360.

Scientists collected mineralized wood samples from the mound of Old Faithful and used radiocarbon to date when the trees grew. 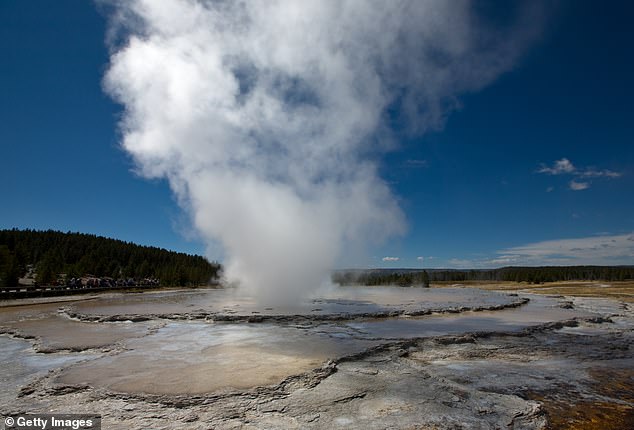 Old Faithful, the geyser that has drawn thousands of tourists every year to Yellowstone National Park, could stop erupting altogether within a few decades, according to researchers

The researchers have concluded that since climate change models predict severe drought by the middle of this century, it is likely Old Faithful will either see extremely long intervals of eruption or cease erupting altogether.

‘Old Faithful is likely thousands of years old,’ Shaul Hurwitz, a hydrologist with the U.S. Geological Survey who worked on the research and helped publish the findings in Geophysical Research Letters, told Inside Science.

‘We found root crowns high up on the mound, and that means that when the trees grew the Old Faithful mound had about the same structure as it has today.’

The geyser spews jets of boiling water and hot steam at regular intervals, the result of the ground water being heated by volcanic rock underneath the Earth’s surface.

Underground water that comes from rain and melting snow seeps through the cracks and fissures of the surface.

The molten rock, or magma, which is formed by the melting of continental plates as they slide over one another, heats the rock above it, which then heats the water that comes into contact with the rock.

The water temperature can reach upwards of 660 degrees Fahrenheit.

In the 1870s, members of an expedition gave it the name Old Faithful because it could be relied upon to regularly erupt at frequent intervals.

Researchers say that over the course of recent decades, the intervals have increased and the geyser has been erupting with gradually less frequency. 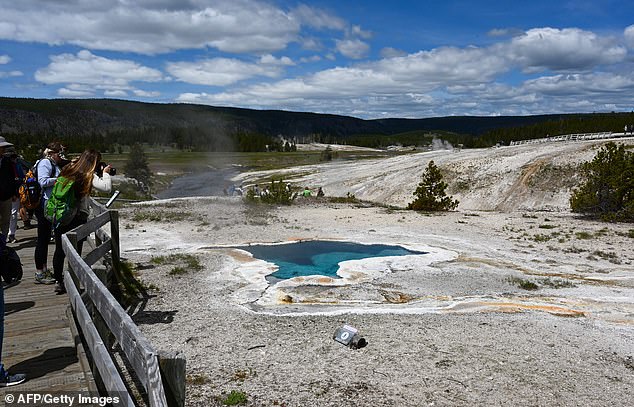 Some 800 years ago, drought conditions allowed trees to grow on the mound of Old Faithful. If climate models are accurate, severe drought by the middle of this century could once again have the same effect and shut off the geyser. Tourists are seen above taking pictures of the Blue Star spring near Old Faithful in June 2019

The study’s authors say that the delicate balance of heat and water that lie underground that have allowed the geyser to function as it has over centuries is being upset by the forces of climate change.

‘The way I try to explain it is that if you have a lot of water compared to the amount of heat, you end up with a hot spring,’ said geologist and Old Faithful researcher Susan Kieffer.

‘And if you have a lot of heat compared to water, you end up with a fumarole, which is a hissing steam vent.

‘In the middle, you have this delicate balance between the amount of heat and the amount of water, and the geyser will only erupt when it gets the required amount of each of those.’

Researchers believe that during the Medieval Climate Anomaly, when many parts of the world experienced prolonged episodes of dry and warm weather, there was less water to be heated, thus throwing the balance out of whack.

In 2008, Hurwitz and his colleagues published a study which found that recent years that have seen lower precipitation have coincided with longer eruption intervals.

Earth sweltered to a record hot September last month, with US climate officials saying there’s nearly a two-to-one chance that 2020 will end up as the globe’s hottest year on record.

Boosted by human-caused climate change, global temperatures averaged 60.75 degrees last month, edging out 2015 and 2016 for the hottest September in 141 years of recordkeeping, the National Oceanic and Atmospheric Administration said.

This record was driven by high heat in Europe, Northern Asia, Russia and much of the Southern Hemisphere, said NOAA climatologist Ahira Sanchez-Lugo.

California and Oregon, states that have been ravaged by wildfires, had their hottest Septembers on record.

Scientists have developed a low-cost 'smart tablecloth' that can suggest recipes for dinner by identifying ingredients placed on top of it.When hooked up...
Read more
U.S

Car thief sneaks inside woman's BMW at the carwash

Clean getaway! Car thief sneaks inside woman’s BMW while she is...
Read more

Their eldest son is set to tie the knot with 21-year-old American heiress Nicola Peltz, next summer.And, David, 45, and Victoria Beckham, 46,...
Read more

Sasha, 19, and a friend can be seen lip-syncing the lyrics to Moneybagg Yo's 'Said Sum' remix featuring the rap duo City Girls in...
Read more

Scientists have developed a low-cost 'smart tablecloth' that can suggest recipes for dinner by identifying ingredients placed on top of it.When hooked up...
Read more

Jeffrey Epstein 'spoke of Trump and Clinton in days before death'