The Girl Sun
Home Feamil Why failing at school was the best thing that happened to my...
Feamil


Two years ago, my youngest son Conor left school with six hard-won GCSEs. He later became a waiter in a branch of a well-known restaurant chain, where he enjoyed earning his own money. Less so the kitchen confrontations and boil-in-the-bag food passed off as freshly made.

For a long while he was frustrated and unhappy. Then came lockdown. The prospect of spending months at home doing nothing struck fear into him — and me. He had no idea what he wanted to do; only that he had always loved cars.

When he turned 18 in May, his father (my ex-husband) and I gave him a pushbike from Argos. Cas gave him a tiny 80cc engine from the internet and, in our back yard, Conor set about turning the cheap bicycle into a noisy motorbike. 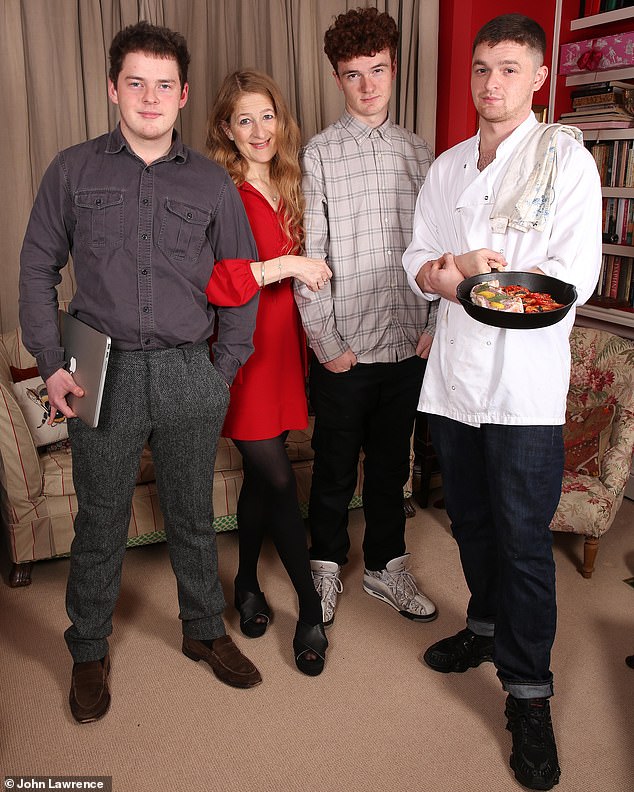 Candida Crewe who lives in north Oxford, reveals how her sons achieved their dream careers through unconventional means. Pictured: Candida with sons Caspar, Conor and Erskine

It made a terrible mess and I yearned for him to read a book instead. Like all good pushy parents, I’d hoped for decent grades, university and a safe and secure career. So when he started talking of a vintage car business he’d heard about, I didn’t hold out much hope.

Despite my reservations, Conor turned up there uninvited in hope of a job. He did so on a Wednesday in July; emailed the boss on the Thursday; was invited back to meet him on the Friday.

He started work the next Wednesday. Now he gets up at 6am, catching several buses to get there. He fizzes with excitement every day.

When I met his brilliant boss, he told me he gets applications all the time. When I asked — rather disloyally — why on earth he gave the opportunity to a boy with barely a qualification to his name, he said Conor had shown initiative and application.

And the clincher? That blessed pushbike-turned-motorbike. Conor had shown him a photograph.

The enlightened fellow was clearly of the increasingly popular opinion that official qualifications often bear no relation to a young person’s abilities or qualities, and was prepared to take a risk.

Candida (pictured) said she takes no credit for her son’s success, admitting she spent time fussing about reading, revision, grades and UCAS forms, fearing for their futures

It made me think of all those graduates I’ve read about, sending out 250 CVs and not even receiving responses, let alone job offers.

On the evening of our third son’s first day at work, my ex-husband rang to celebrate the fluke that we now had three children in gainful employment.

Erskine, 22, Caspar, 20, and Conor have all, much to my surprise, gained their dream jobs through unconventional means — with no qualifications. Nothing.

‘We must have got something right,’ said my ex-husband, a cork popping in the background.

I’m delighted, but I take absolutely no credit. While I fussed about reading, revision, grades and UCAS forms, fearing for my sons’ futures, their father gave them space to be themselves. He never forced them to do extracurricular activities (unlike the cello lessons and football practice I pressed on them). He encouraged them to focus on doing what they loved, not what society — or their mother — deemed a proper job.

Perhaps this is something other parents like me need to hear now, as many question what will become of their children when the future looks so bleak. Passion is an overused word but, surely, finding and doing what you love still counts for something. It is not all about box-ticking and A grades.

Candida said Erskine (pictured) who was predicted three As at A-level, got employed as a chef after speaking to the head chef at a London restaurant

Since the pandemic, it has become obvious that nurses, carers, shelf-stackers and delivery drivers are in fact the most valuable members of our society and their pay should reflect that.

Of course, education will always be important. But it is hard to think of poor university students banged up in halls of residence like prisoners. And for what? Remoter and remoter learning, and crashing job prospects.

I did not go to university because I hated school, so was depressed during my A-levels and didn’t pass well enough. My ex-husband left school at 15 and became the youngest-ever member of Magnum Photos — the international photographic co-operative — at the age of 21. He is now a professor of photography. We both love our work. Hypocritically, though, I pushed for our boys to go to university.

We have lived in north Oxford since 2006, with constellations of A stars and Oxbridge and Russell Group university triumphs everywhere you look. Yet despite a prep school start, followed by a superlative state secondary, my sons resisted my increasingly anxious exhortations to toe the line.

Erskine was predicted three As at A-level, yet drank and rebelled through sixth form. He did at least sit the exams, achieving a relatively impressive B C C, considering he did no work whatsoever.

Candida said Casper (pictured) who got three Us at A-Level, was offered a role at a tech company after pitching to the managing director

I despaired, a bit. But then two summers ago he had the chutzpah to walk into a wonderful London restaurant off the street and ask to talk to the head chef. They said he was in a meeting.

Erskine walked round the block, took a deep breath and went back in. Meeting over, the head chef agreed to talk. He has been employed as a chef there ever since.

Meanwhile, Caspar turned up to all his A-level exams but he doodled and spoilt the papers by writing ‘88 per cent’ in a box marked For Official Use Only.

At the time I wanted to kill him. All that education wasted. What an arrogant, immature idiot!

But all along he had his sights set on a certain cool tech company. Days after getting his A-level results — three Us, obviously — he went to their office on ‘Silicon Roundabout’ in East London, rang the office bell and the receptionist (bless her!) buzzed him in.

Cas, who has a humble manner but also a hint of audacity and ambition, gave the managing director his elevator pitch. He told him he had been computer programming since the age of six. 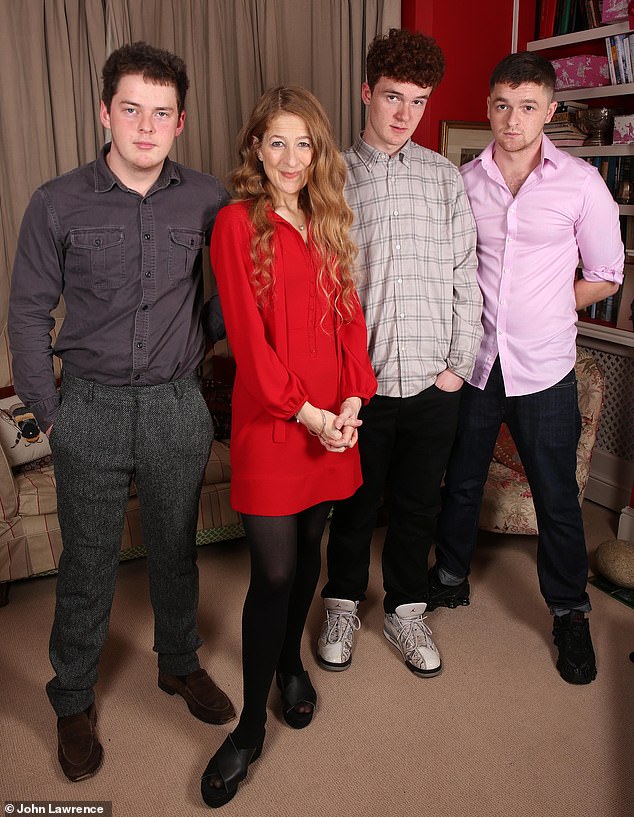 Candida said parents should encourage their children to find what they truly love. Pictured: Candida with sons Caspar, Conor and Erskine

Cas omitted to mention that he had gained his computer skills at the expense of schoolwork — but the MD didn’t ask about his grades. He simply offered tests and interviews and, blow me down, the jammy dodger got the job. Then 18, he started on a salary that was more than I have ever earned.

My sons’ achievements despite their results at school are proof to me of a myopic education system. Those with no desire to learn French verbs by rote, say, or quotes from Jane Eyre, are brutally dismissed, even if they have much to offer in other areas.

I love the fact that Lord (Kenneth) Baker, who introduced GCSEs as education secretary, now says our national curriculum is ‘Edwardian’ and unfit for purpose.

Jonnie Noakes, director of teaching and learning at Eton College, said in June: ‘We need to teach people how to be fully flourishing human beings.’ To which I, now reformed, say, hear, hear!

My generation’s assumptions have been turned on their heads. Even my more conventional contemporaries are questioning the watertight belief that university is worth it for every student.

And Covid-19 has hastened and broadened a debate that had been rumbling ever since fees were introduced. Rather than stifling our children under increasingly weighty expectations, we should encourage them to find what they truly love — be that cooking, coding, carburettors or whatever.

May they have the encouragement, good fortune, conviction, courage and self-confidence to go out there and grab their dreams. Walk in off the street, if that’s what it takes. As my own incorrigible, education-resistant, box-eschewing three boys have taught me.

A VERY windswept Duchess of Cornwall visits The National Arboretum

Waitrose customer leaves review based on grammar in description

'So comfy and great quality': These leggings have over 24,000 five-star...
Read more
Feamil

A savvy shopper who has slashed her weekly food bill to half the national average revealed batch cooking two weeks' worth of dinners...
Read more

Emilia Clarke wraps up warm in a white padded jacket and...
Read more

US President hopeful Joe Biden appeared to forget who the current United States President was during an interview. Mr Biden spoke to his...
Read more

China has screened an entire region in Xinjiang for the coronavirus after authorities found a single new case in a local outbreak. Health authorities reported...
Read more

China is close to 'world domination' and Europe must wake up to the danger, German spy chief says

China is on the brink of 'world domination' and Europe needs to wake up to the danger, a former German spy chief has...
Read more

China claims it has a historic right of ownership to almost the entire South China Sea, despite a 2016 international arbitration ruling saying...
Read more