A white instructor at the Drug Enforcement Administration Training Academy in Virginia allegedly called a black recruit a ‘monkey’ and taunted trainees by making monkey noises over the loudspeaker.

The incidents are alleged to have occurred on a firing range at the DEA’s training academy last year, according to an internal complaint obtained by the Associated Press.

In one incident, the firing range instructor, Special Agent Jay Mortenson, allegedly called out a name that was shared by two trainees: One black and one white.

When both recruits responded, the white instructor allegedly said: ‘I meant the monkey.’

The instructor also was accused of going on the loudspeaker in the tower of the outdoor firing range to taunt black trainees by making ‘monkey noises’.

At least two black trainees raised their concerns to a DEA supervisor who sent them up the chain of command.

Mortenson was removed from his post on the firing range but then retired some time later. 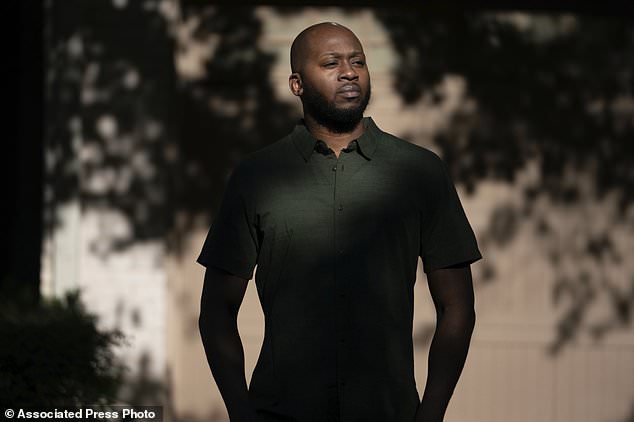 Derek Moise, a black DEA recruit who was later dismissed, said he did not hear the monkey noises for himself but recalled the discomfort they caused his fellow black trainees who did. The DEA has received a string of recent complaints describing a culture of racial discrimination at its training academy

The DEA said the instructor was ‘promptly reassigned’ after agency leadership learned of the alleged ‘inappropriate behavior’.

The agency said it has ‘no authority to pursue an administrative action’ because its internal affairs arm, the Office of Professional Responsibility, was still investigating when Mortenson retired last year.

When asked to comment via phone on the allegations, Mortenson said they were ‘incorrect’.

He said ‘I’m not going to talk to you about it’ before hanging up.

The recruits who originally accused Mortenson are still employed by the DEA and not permitted to speak publicly about the incidents.

Derek Moise, a black DEA recruit who was later dismissed, said he did not hear the monkey noises for himself but recalled the discomfort they caused his fellow black trainees who did.

‘Everybody knows what those sounds and noises stand for.’

The allegations were laid bare in an internal complaint, which are not typically made public.

The DEA has received a string of recent complaints describing a culture of racial discrimination at its training academy in which minorities are singled out, derided with insults and consistently held to a higher standard than their white counterparts, according to interviews with former recruits and law enforcement officials and records. 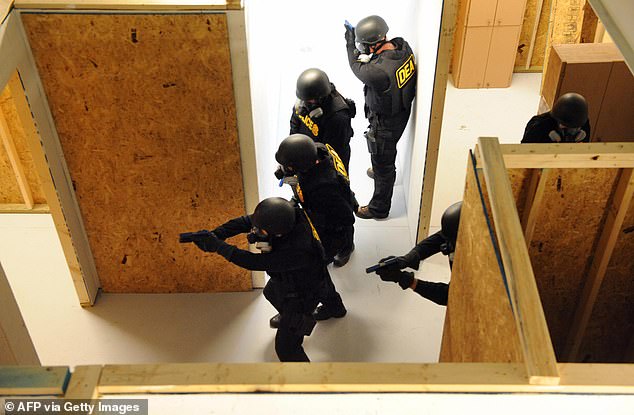 The incidents are alleged to have occurred on a firing range at the DEA’s training academy (above) last year, according to an internal complaint obtained by the Associated Press

In one case, a black recruit was told his skin color made him a surefire candidate for undercover work. In another, a Hispanic woman, chatting in Spanish with a fellow trainee, was admonished to ‘speak English, you are in the United States’.

At least two of the complaints prompted internal DEA investigations, one of which remains ongoing.

The complaints offer a rare window into the frustration minorities have voiced about their treatment at DEA since the filing of a 1977 civil rights lawsuit that remains unresolved despite a series of court orders governing the agency’s hiring and promotion practices.

Like other federal law enforcement agencies, including the FBI, the DEA has struggled to fill its ranks with minorities.

Of the agency’s 4,400 special agents, just 8 percent are Black and 10 percent are Hispanic.

The DEA said it could not immediately provide a racial breakdown of recent graduates of the academy, which puts through multiple classes a year of about 50 to 60 trainees each.

‘DEA takes allegations of misconduct very seriously and will not tolerate discriminatory behavior of any kind,’ the agency said in a statement.

‘DEA is committed to recruiting, retaining and promoting a workforce that reflects the diversity of our country and the people we serve.’

Former recruits who spoke to AP said racism permeated their time at the academy from their first day of basic training, alleging exceptions were routinely made for underperforming white trainees while blacks were held to an appreciably higher standard.

‘They weren’t going to let me graduate and become an agent no matter what,’ said Theo Brown, a black recruit from Marietta, Georgia, who contends he was unfairly dismissed in early 2018.

‘They put you in situations where they can fail you at something subjective, and it’s basically your word against theirs.’

Brown said he was pepper-sprayed three times in a single training exercise while other trainees were sprayed once. It got to the point, he said, that other trainees didn’t want to work near him because of the ‘special attention’ he was receiving. 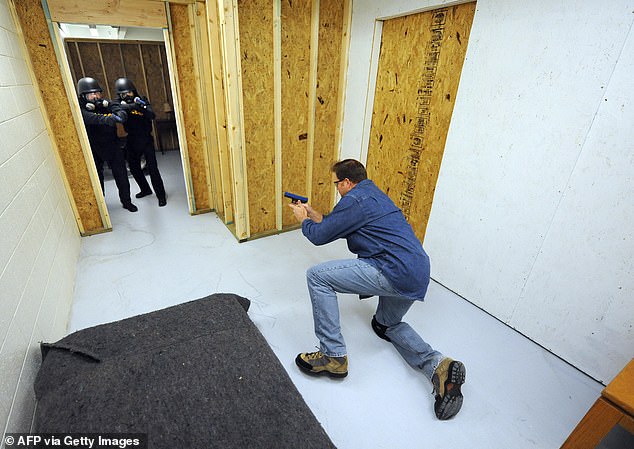 The DEA has received a string of recent complaints describing a culture of racial discrimination at its training academy in which minorities are singled out, derided with insults and consistently held to a higher standard than their white counterparts

Academy instructors maintained Brown fell short short in several disciplines, citing his ‘lack of enthusiasm’ and issues with his report writing, according to DEA records. They denied that discrimination played a role in his dismissal.

More recently, the DEA opened an internal investigation into claims brought by Saudhy Bliss, a Hispanic woman from Orlando, Florida, who says she was dismissed from the academy last year after being treated in a ‘hostile manner.’

She alleges she was called a ‘f***up’ in front of her colleagues, ‘required to drag a 220-pound-plus male across a great distance’ and even struck in the forehead by a simulation round that caused her to bleed profusely.

‘There is compelling evidence that a number of the individuals assigned to train this particular class were openly discriminatory towards African-Americans, Hispanics and female trainees,’ Bliss’ attorney, Louis F. Robbio, wrote in a letter last year to the DEA’s acting administrator, referring as well to the incident involving the monkey noises on the firing range.

Moise, who earned a master’s degree in criminology and played wide receiver at Florida Atlantic University, said he wanted to work for the DEA from the time he was 6 years old when he witnessed a drug raid at a neighbor’s home in Miami.

‘My mom felt that much more comfortable letting me play outside after that,’ he recalled. ‘I saw those yellow DEA letters and thought they were the coolest people on Earth.’

Moise says he never tried drugs and stayed out of trouble because he always planned to apply for DEA. But from the moment he arrived at the academy, he said, it was clear he would be judged on a different scale.

Moise said he ultimately was dismissed after instructors determined he used excessive force by firing one too many rounds at an assailant during a simulation. At the same time, he said, the academy graduated white trainees who, instead of saving their partner in the same simulation, ‘threw their gun under the bed and just froze.’

‘There was never any praise for anything that we did as minorities, and we were always being made examples of,’ said Moise, who has since taken a state government job. ‘You can’t tell me that there’s not more black people who qualify.’

thegirlsunhttps://thegirlsun.com
Previous articleKlopp insists Liverpool needed 'a real smack in the face' after humiliating loss to Aston Villa
Next articleBook by Trump exec claims he 'joked to Jews about ovens' and 'banned black people from his lobby'

The parents of a New Jersey stock broker who killed himself while under suspicion of murdering his girlfriend allegedly deleted text messages in...
Read more
U.S

The second series of Netflix's Sex Education ended with Gillian Anderson's character Dr Jean F. Milburn finding out she was pregnant.And the actress, 52, was...
Read more

'I keep kissing you in your sleep': Lauren Goodger, 34, shares...
Read more

Just 59 days after Bayern Munich lifted the trophy in Lisbon, the Champions League is back as we prepare for the start of...
Read more
News

Plans to hold a 10,000-person wedding in Brooklyn on Monday have been blocked by sheriffs in New York City, following a tip off...
Read more
U.S