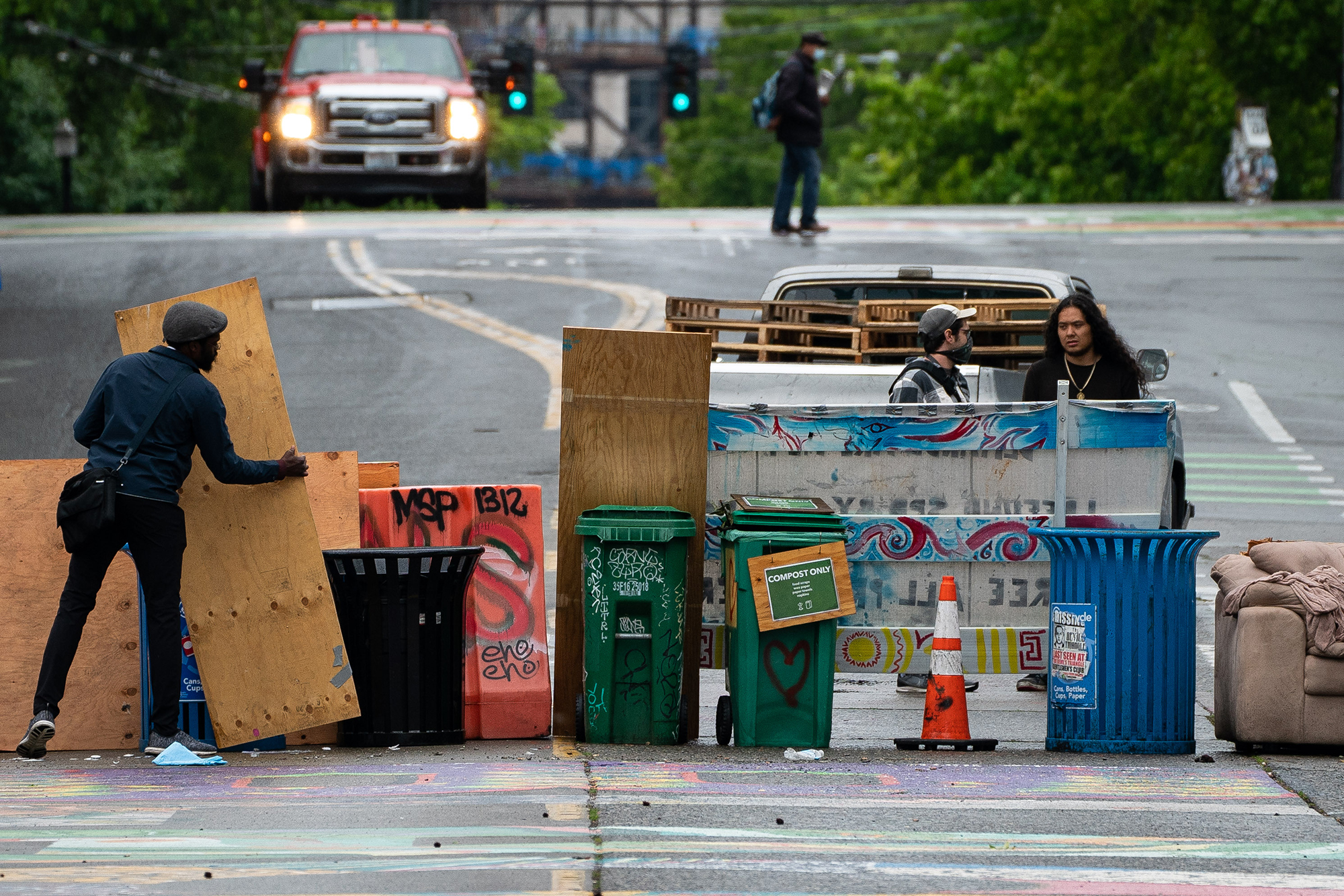 Footage posted on Facebook by Converge Media shows the frenzy inside the cop-free CHOP zone after gunfire erupted there around 3 a.m. on Monday, leaving a 16-year-old boy dead and a younger teen critically wounded.

The nearly 40-minute clip also shows the bullet-ridden white Jeep Cherokee SUV that the teens were believed to have been riding in.

Witnesses said they had spotted the vehicle near one of the makeshift barriers around the protest zone just before the shooting, Seattle Police said.

Callers to 911 reported several people firing into the vehicle.

Marty Jackson, a volunteer medic in the CHOP zone, told local station KUOW that folks should stop coming to the area, “Because now it’s like pretty much an active war zone.”

Jackson alleged that the protest zone’s own security guards were the ones who fired on the SUV after it crashed into a concrete barrier on the outskirts of the area.

He said he heard gunshots early Monday and saw the SUV zooming through Cal Anderson Park, which is part of the occupied area.

He then heard more shots near Seattle Police’s abandoned East Precinct at 12th Street and Pine — and calls for medics.

When he arrived, medics were tending to two injured people. One of them seemed like he would survive but the other had been struck in the head, Jackson said.

“The guy that I’m working on got shot in the face twice — once in temple, once in the jaw. Probably four or five times in the arm and then once on the side,” Jackson told the outlet.

He said it took about 15 minutes to flag down paramedics to help the wounded. By the time they reached emergency personnel, the person who had been shot in the head was dead, Jackson said.

Jackson also said he believed CHOP’s medical personnel hadn’t acted quickly enough to help the victims, whom he recognized as having hung out in the area over previous nights.

Police on Tuesday didn’t immediately provide updates on the violence, which took place just over a week after another shooting in the zone left a 19-year-old man dead and a 33-year-old man wounded.

Chief Carmen Best said Monday that it appeared the crime scene in the most recent shooting had been tampered with, making it tougher on investigators.

“Our homicide detectives searched the Jeep for evidence but there wasn’t much we could find,” Best said.

“It’s abundantly clear to our detectives that people had been in and out of the car after the shooting.”

Detectives are relying on witnesses to figure out what happened, but Best said that, as with the other shootings in the area, “people are not being cooperative with our requests for help.”

What is bubonic plague and how is it treated? 0