He was left heartbroken on The Bachelorette last year when Angie Kent dumped him for Carlin Sterritt during the season finale.

And Timm Hanly has sensationally claimed that the former Gogglebox star reached out to him via Instagram after her split from Carlin last month.

But the 27-year-old larrikin, who recently appeared on Bachelor in Paradise, told The Daily Telegraph that he rebuffed Angie’s offer of friendship. 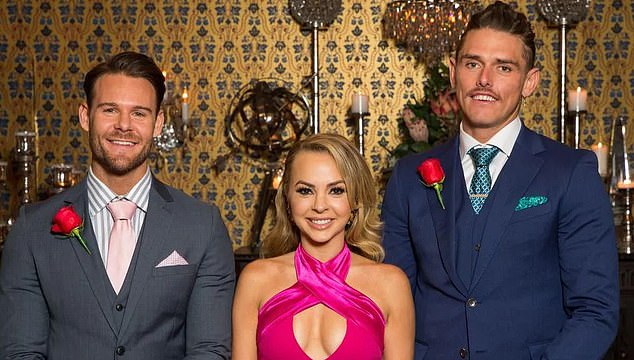 Thanks, but no thanks! Bachelor in Paradise star Timm Hanly (right) rejected Angie Kent’s (centre) offer of friendship after she ‘slid into his DMs’ following her recent split from Carlin Sterritt (left). The trio are pictured on The Bachelorette last year

‘She slid into my DMs ­but I just said, “Look I don’t think we are going to be friends,”‘ Timm said.

‘She said she hoped we might be friends and s**t after her and Carlin broke up. I was just like, “Whatever, relax love.”‘

Timm’s response to Angie’s message is hardly surprising given that she recently criticised her crop of Bachelorette contestants on Instagram.

She claimed that ’98 per cent’ of the men on her season were ‘only there to get on Bachelor in Paradise’ and weren’t actually interested in dating her.

Earlier this week, Angie also took a swipe at Ciarran Stott, a suitor from her season who later joined the cast of Paradise – and who happens to be Timm’s close friend.

In response to Ciarran’s womanising ways on Paradise, she wrote on Instagram: ‘Sorry Straya! If I knew sooner I would’ve sent him and his hype man home second episode.’

At the time, Many fans speculated that Timm was the ‘hype man’ she was referring to, as the two men were inseparable in the Bachelorette mansion.

It comes after Timm abruptly quit Bachelor in Paradise on Monday’s episode.

He explained that he wanted to pursue his relationship with Brittany Hockley back in Australia, but he ghosted her shortly after returning to Melbourne.

The fireproofer blamed his drinking and partying on their split, but revealed on KIIS FM on Tuesday that he was ‘four months sober’.

He has since reunited with his ex-girlfriend of seven years, Briana De La Motte.

Bella Varelis hints she is the next Bachelorette after