Residents in Coventry have slammed a funfair that has been set up for half-term, just yards away from a major coronavirus testing centre, as the city enters Tier 2 coronavirus restrictions today.

The Pleasureland theme park experience has been assembled in the car park of the Rioch Arena as coronavirus cases continue to rise in the region.

The half-term funfair didn’t look much fun after it opened on Friday, with pictures showing a nearly deserted theme park in the car park of the Ricoh Arena – home to the Wasps Rugby Union team.

Images showed that just yards away – across the A444 – the Judds Lane drive-through Covid-19 testing centre is in operation, with a series of white tents set up in a separate car park. 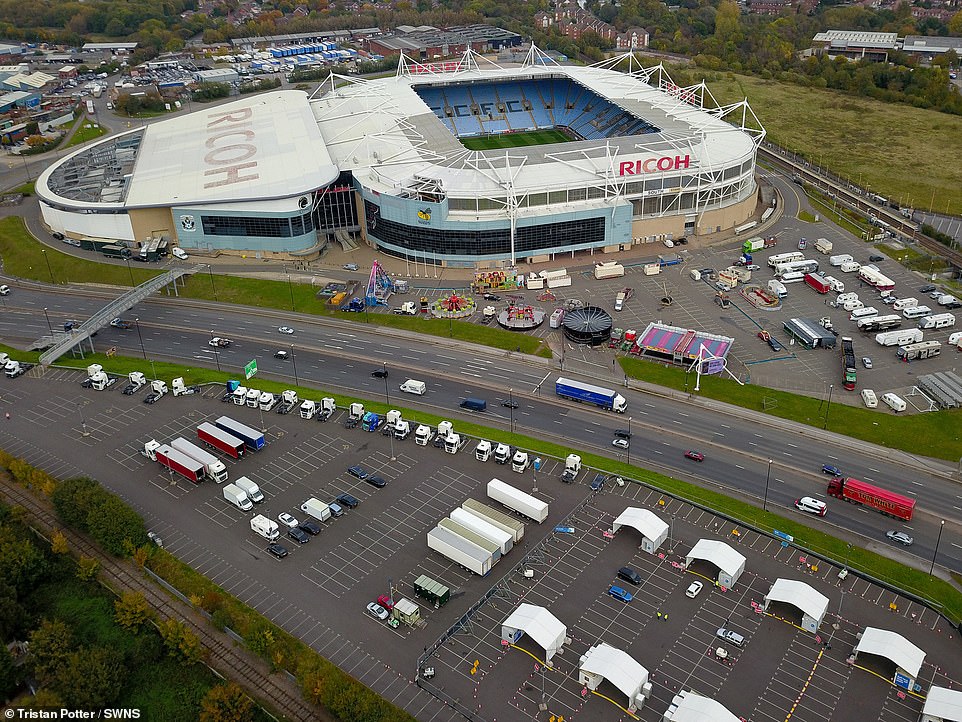 Aerial view of the Covid-19 testing centre on the A444 in Coventry, which is directly opposite the Ricoh Arena ‘Pleasureland theme park’ which is set to open on October 22 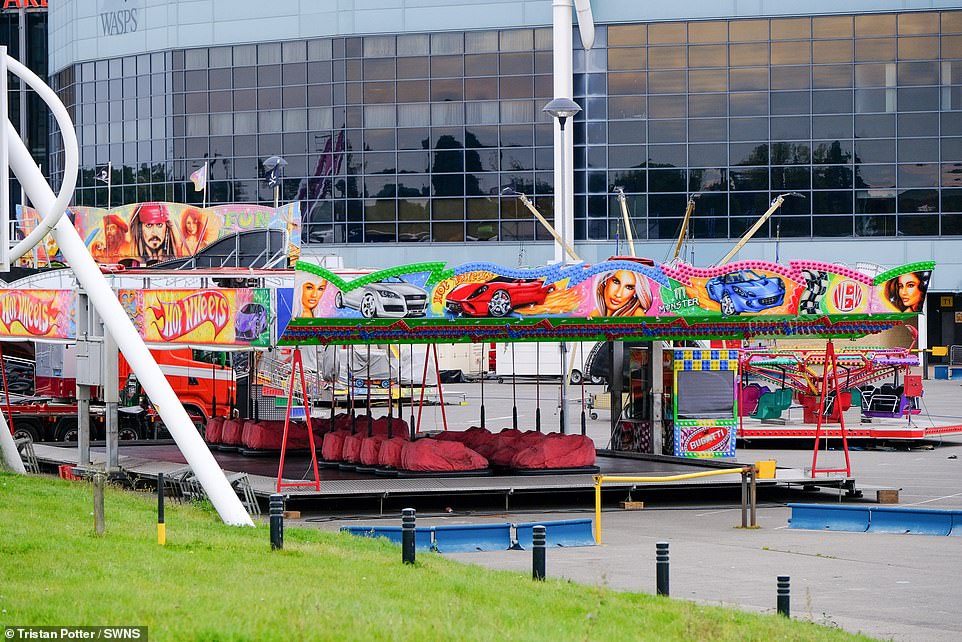 Pictures of the theme park showed it empty, but when it opened on Friday night bleak pictures show a trickle of families turning up

Bleak pictures showed a trickle of families turned up when it opened on Friday night when the theme park opened, as residents called for it to close.

Social media users have called on the funfair to close immediately amid the rising cases, pointing out the absurdity of opening a theme park during the crisis.

Writing on Facebook, Terri Bowden said: ‘This MUST be shut down as we are going into Tier 2. Too many people are being affected.’

Steven Prew wrote: ‘Tier 3 on its way, sent to Coventry.’ 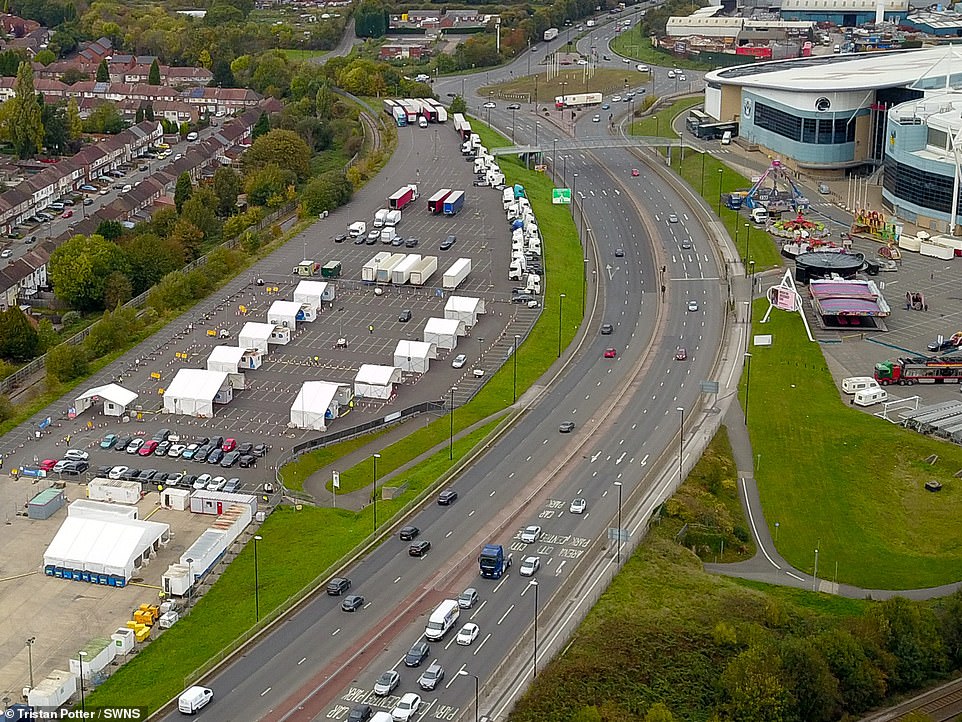 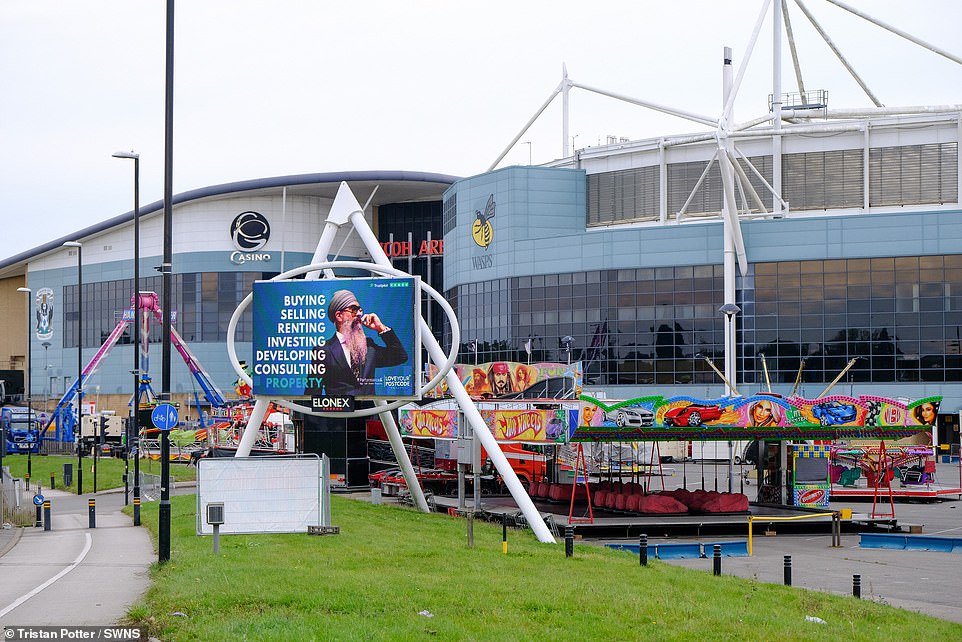 Owner Tommy Wilson said: ‘We are one of the safest fairs in the country, our cleaning regimes are second to none and we do everything we can to keep our customers safe’

Alan Court wrote: ‘I cannot see my family indoors but I can ride the f***ing ghost train with a load of strangers. Thank you very much.’

Steve Millar wrote: ‘How will a fun fair be allowed when the city is in tier 2. Plus why allow a fun fair that will obviously pose a risk but cancel everything else. It’s an absolute joke.’

Deanne Bowell wrote: ‘I bet there won’t be any social distancing or cleaning of the rides. It’s so weird how rugby can’t have spectators that could easily social distance (outside) may I add but a packed funfair is aloud to operate!’

Ian Titford wrote: ‘Drop the kids at the fair while you pop over for a covid test maybe.’ 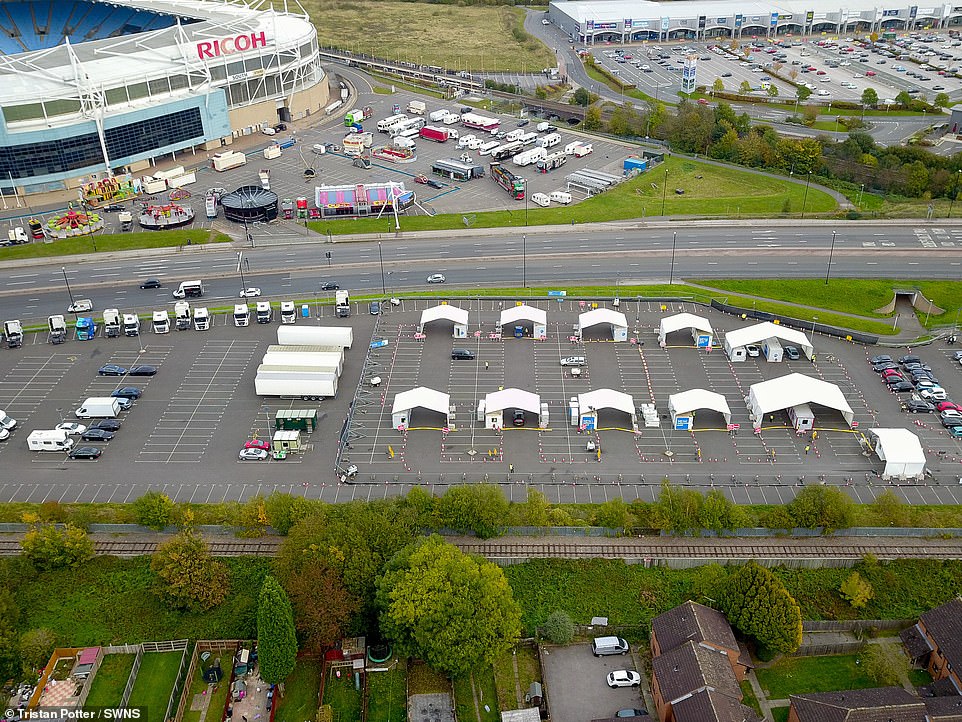 People on social media reacted in disbelief to the theme park’s existence, with netziens calling on the funfair to close immediately 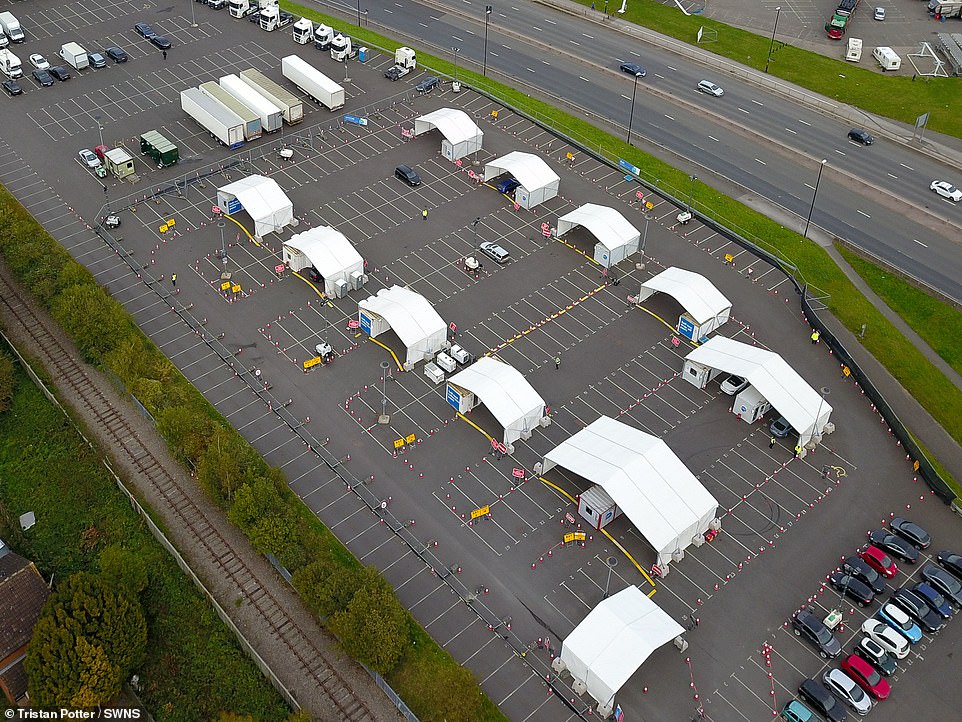 Writing on Facebook, Terri Bowden said: ‘This MUST be shut down as we are going into Tier 2. Too many people are being affected’

Linda Prestidge wrote: ‘I cant go to see family in their homes but i can go to a funfair with complete strangers. I don’t believe all of the rides will be cleaned throughout the day – cleaning like pubs, restaurants and hairdressers have to do.’

Carlos Chebworth wrote: ‘Hook a duck is different this year – instead of a goldfish you get COVID.’ 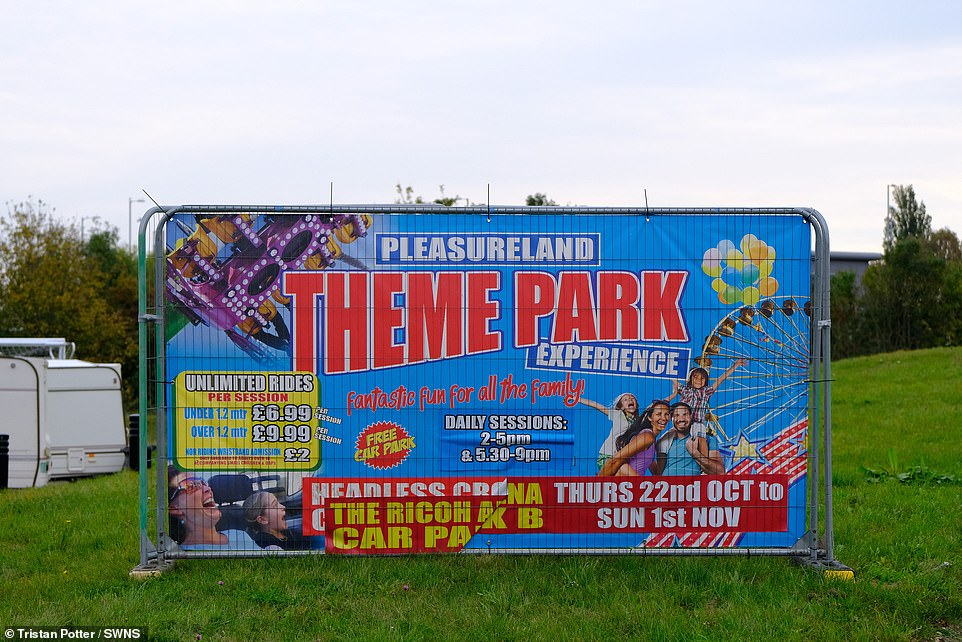 The Pleasureland Theme Park experience, which is run by Wilson’s Amusements, will run until November 1

The Pleasureland Theme Park experience, which is run by Wilson’s Amusements, will run until November 1.

Owner Tommy Wilson said: ‘We are one of the safest fairs in the country, our cleaning regimes are second to none and we do everything we can to keep our customers safe.

‘We operate a wrist band policy to keep numbers down, we are running at 60 per cent capacity so social distancing is easier to maintain.

‘I have my children and grandchildren here and I am not going to do anything to jeopardise their health.

‘You are more likely to catch the virus in your local Tesco with lots of people handling the same items and putting them back on shelves.

‘I understand some people are still frightened but we must find a way to keep going.’ 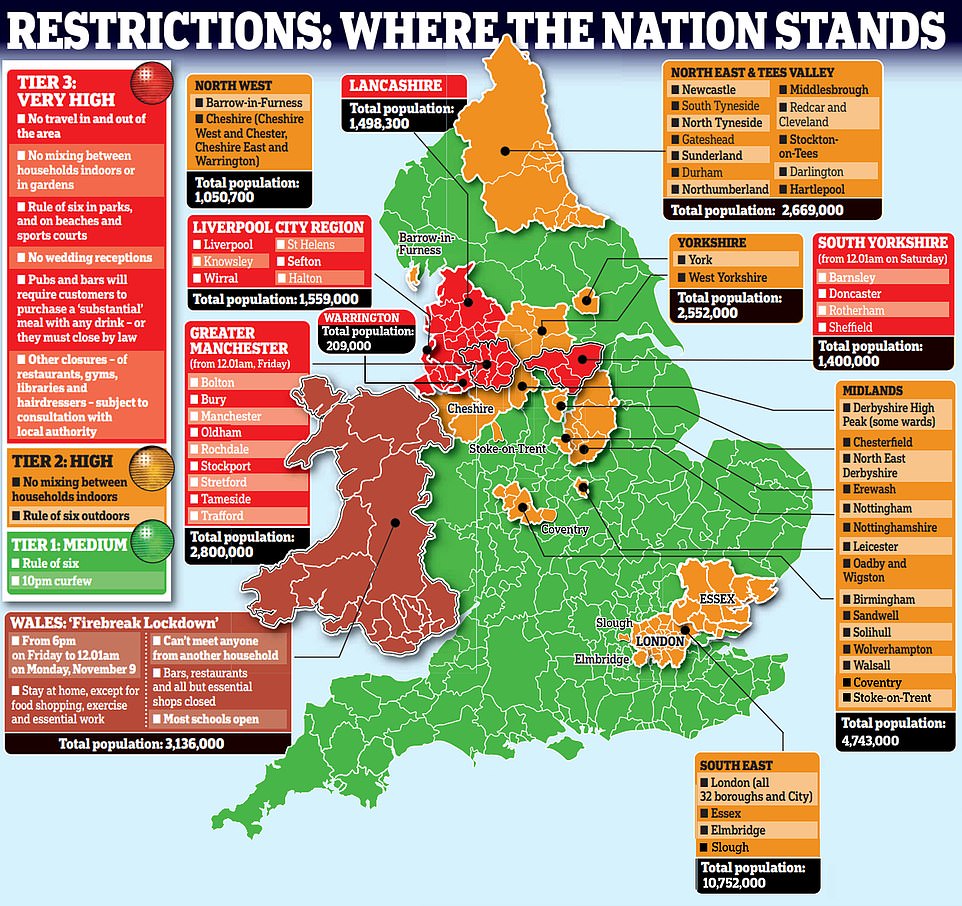 Coventry is among a number of other regions in the midlands to go into a Tier 2 lockdown. It entered Tier 2 today along with Stoke, and Slough in the South East 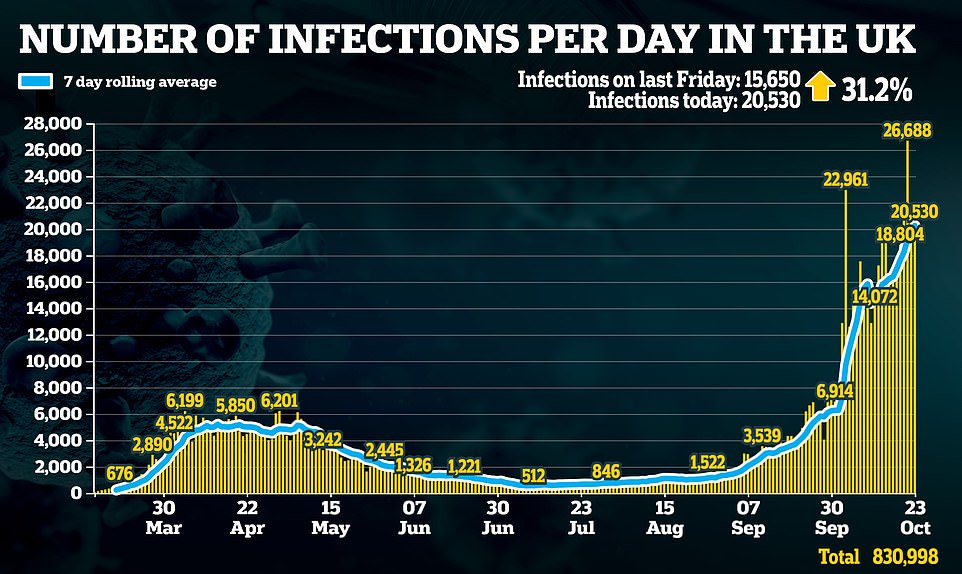 The UK yesterday announced 20,530 more coronavirus cases and the deaths of 224 people but official data suggests the country’s outbreak may finally be slowing down

Coventry, Stoke and Slough entered Tier 2 today, while talks between Westminster and civic leaders in Nottingham over possible Tier 3 restrictions were continuing yesterday.

The UK yesterday announced 20,530 more coronavirus cases and the deaths of 224 people but official data suggests the country’s outbreak may finally be slowing down.

But Government scientists claimed the crucial R rate has dropped slightly and an array of statistics revealed cases are no longer growing as quickly as they once were, although the epidemic is still growing.

SAGE estimates the reproduction rate for the UK has fallen for the first time in a month, from between 1.3-1.5 to 1.2-1.4. The number – the key measure at the heart of Number 10’s plan to control the virus – must stay below one, or the outbreak will continue to grow.

The NHS test and trace system has come under fire from many corners, with prime minister Boris Johnson even admitting to its shortcomings on Thursday.

Fewer than six in ten close contacts of those who test positive for Covid-19 are being reached by tracers, well below the 80 per cent target.

And figures released Thursday show that only one in seven people receive virus test results within 24 hours, the lowest on record.

The Prime Minister said: ‘I share people’s frustrations and I understand totally why we do need to see faster turnaround times and we do need to improve it.’

Sir Patrick Vallance, the chief scientific adviser, added: ‘It’s undoubtedly the case that test, trace and isolation becomes much more difficult to have an impact once numbers are high.

‘So, it’s much more effective when numbers are low. It’s very clear that there’s room for improvement.’ The figures show that in the week ending October 14, only 15 per cent of those who were tested in the community received their result within 24 hours.

This is down from 32.8 per cent in the previous week and is the lowest since Test and Trace began.

Divorced people reveal the moment they knew their marriage was over...
Read more
News

Olivia Attwood tries on dresses ahead of wedding to Bradley Dack

Jennifer Lopez takes her twins Emme and Max, 12, for a bike ride

Jennifer Lopez cuts a casual figure in cosy knitwear as she...
Read more