Pro-democracy activists in Thailand have staged a fourth straight day of high-profile protests in the capital, thwarting efforts by the authorities to stop them, including a shutdown of the city’s mass transit systems.

Unlike Friday’s protests, which saw police using water cannons to keep the demonstrators at bay, Saturday’s rallies were peaceful, with no reports of clashes by the time participants started heading home in the evening.

The protests are part of an anti-monarchy movement that has been rallying for months in the kingdom, upsetting law and tradition which demand respect for the royal family.

Along with monarchical reform, demonstrators are demanding that Prime Minister Prayut Chan-ocha resign and call fresh elections and that the constitution adopt changes to make it more democratic. 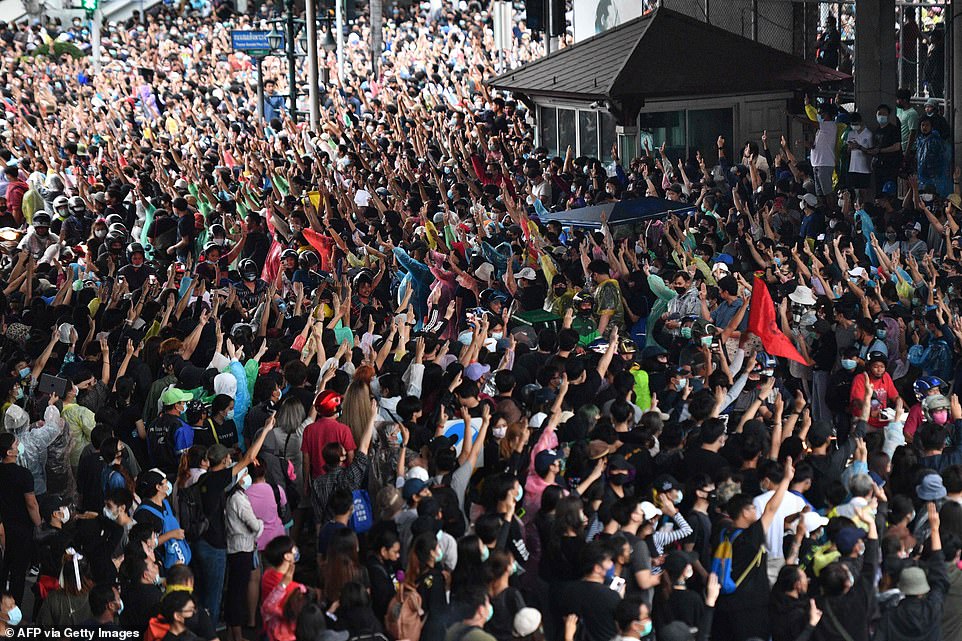 Thousands of Thai pro-democracy protesters gathered in Bangkok on Saturday in defiance of a state of emergency preventing people from assembling in groups of more than four and despite efforts by authorities to stop them, including shutting down parts of the capital’s transport system 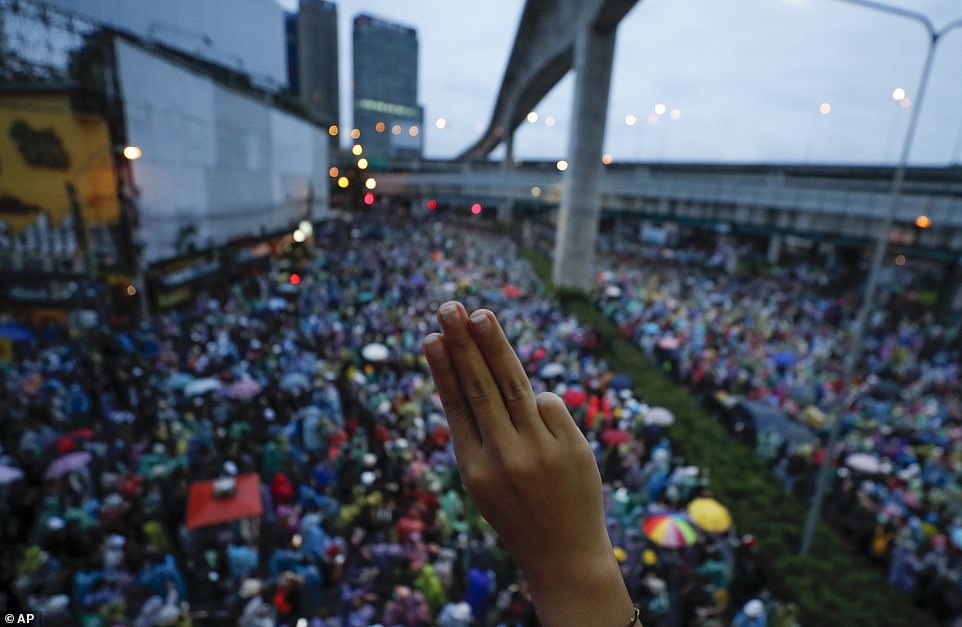 A protester raises a three-fingered salute, adopted from the Hunger Games film franchise, which has become a symbol of Thailand’s youth-led pro-democracy movement 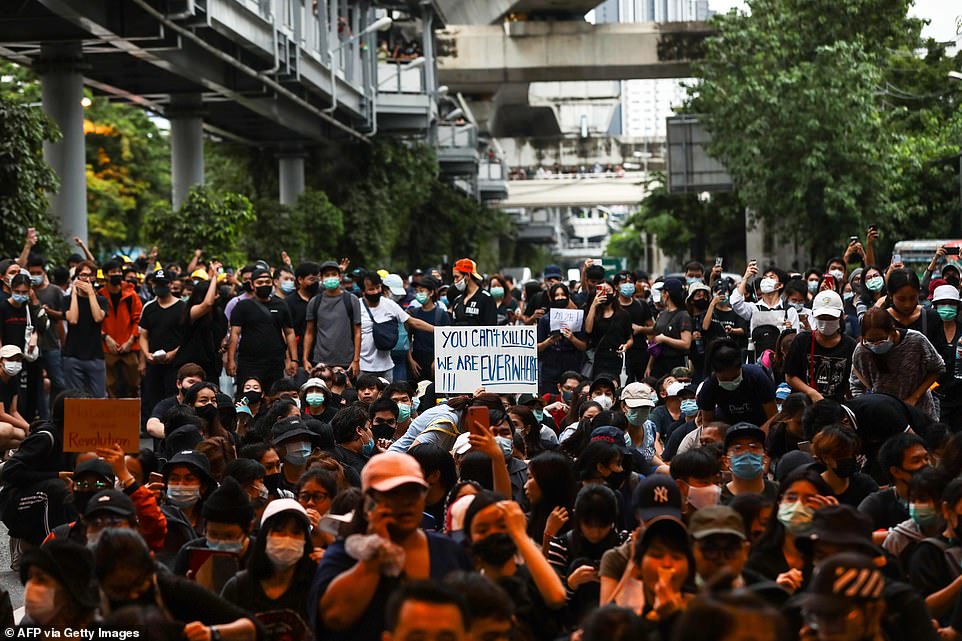 Saturday afternoon saw the closure of all stations of Bangkok’s elevated Skytrain transit system in an attempt to keep the protesters from gathering at Ratchaprasong – a junction in a popular shopping district that has been a flashpoint in protests over the last week.

The underground MRT system was also shut, and police blocked off several roads ahead of the planned rally.

Protesters met as regardless, holding small demonstrations at the Skytrain stations, in effect  establishing a temporary but active presence across the city.

Some taped signs bearing pro-democracy messaged to the shutters of the closed stations as protesters raised their arms to display a three-fingered salute adopted from the Hunger Games films, which has become a symbol of Thailand’s pro-democracy movement.

The organisers then issued a fresh advisory for followers to gather at three stations outside the city’s central area, where access was easier.

Following the announcement, money was pooled by participants so they could take taxis to get around the transit shutdown. 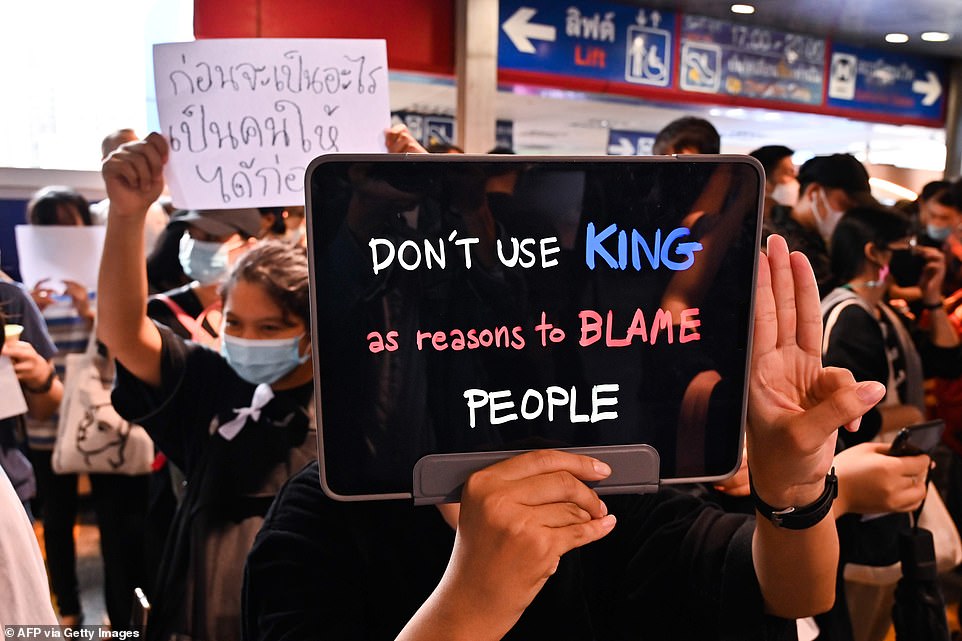 Pro-democracy protesters gathered at stations of Bangkok’s elevated Skytrain, which had been shuttered by police on Saturday afternoon, to hold a series of small rallies across the city. Above, young protesters at Asok BTS Skytrain station hold up messages saying ‘Before you become anything, be a human first’ and ‘Don’t use the king as reasons to blame people'[sic] 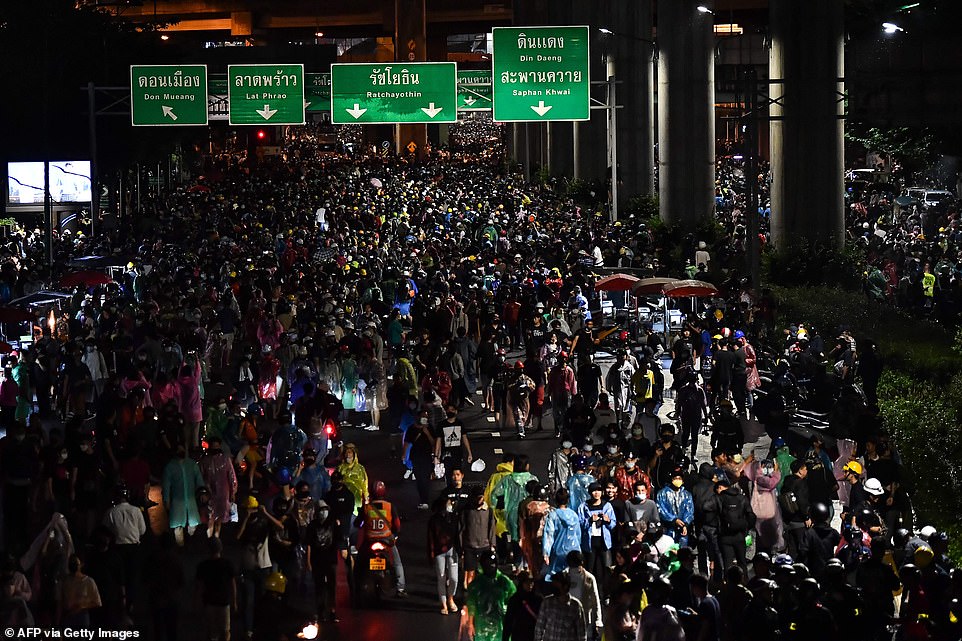 With transport systems shut down, protesters took to the roadon Saturday, with some trying to reach the site of a planned rally at Ratchaprasong – a junction in a popular shopping district that has been a flashpoint in protests over the last week 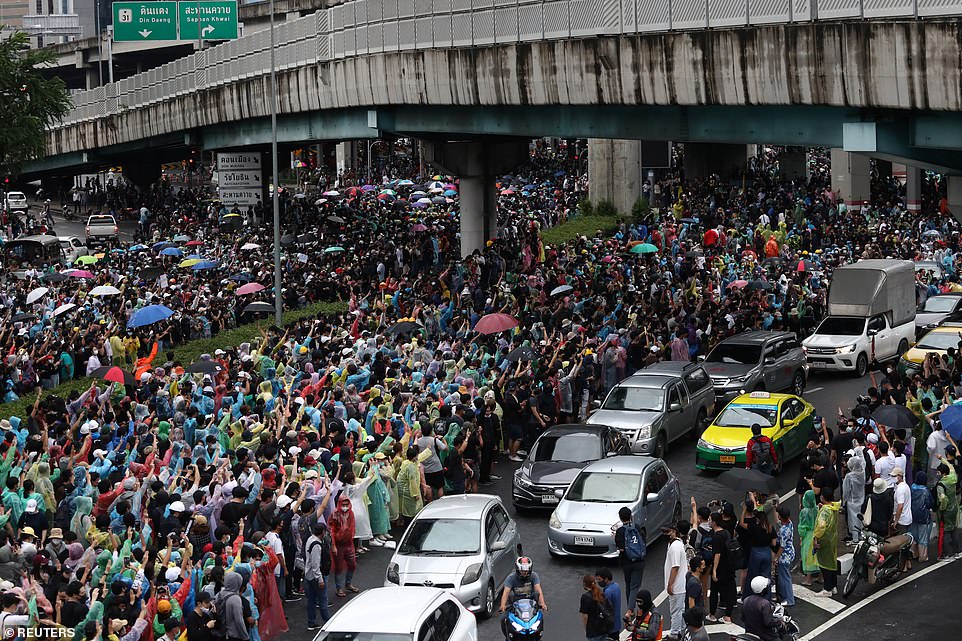 The protests are part of an anti-monarchy movement that has been rallying for months in the kingdom, upsetting law and tradition which demand respect for the royal family

‘Right now we can do nothing much,’ said a 26-year-old hotel worker Veronica. ‘What we can do right now is only show our power to let the outside see.’

Several thousand people gathered in multiple locations, with some taking turns airing their views over a megaphone.

By the evening, police had not disturbed the crowds, even when some groups began marching in the street. 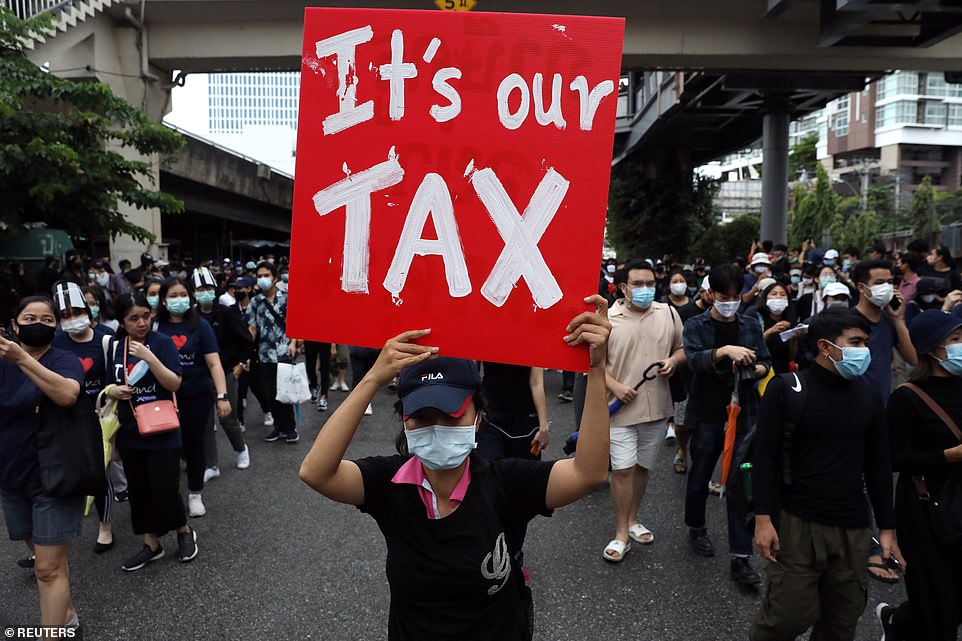 Key among protester’s demands are monarchical reform. King Maha Vajiralongkorn and other members of the kingdom’s ruling family are protected from criticism by law but the role and wealth of the king – whose activities are partly funded by tax – have come under intense scrutiny 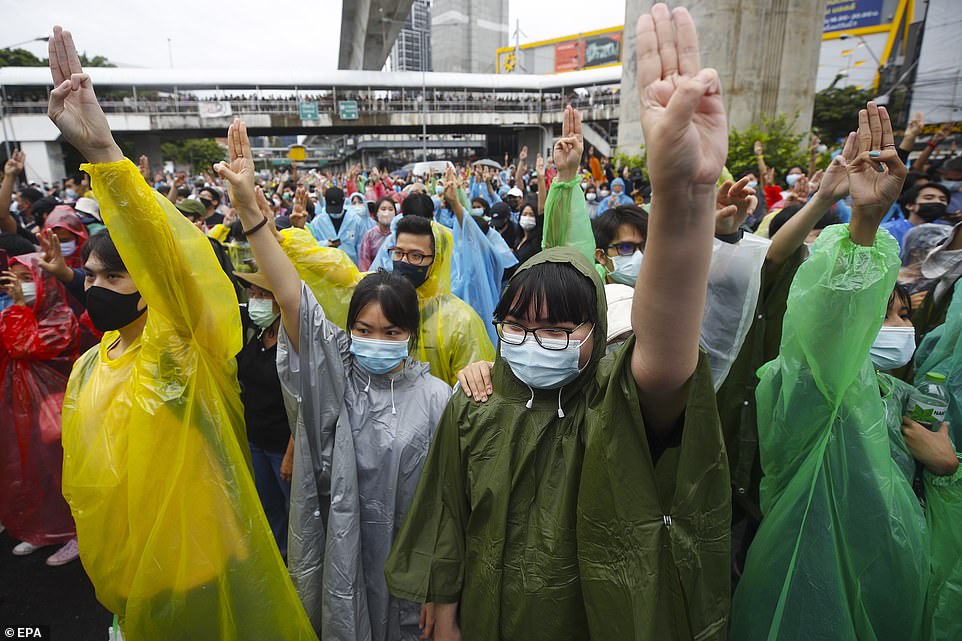 Defiant pro-democracy protests gather as part of a youth-led movement calling for fresh elections, monarchical reform and a shift in the constitution towards democracy 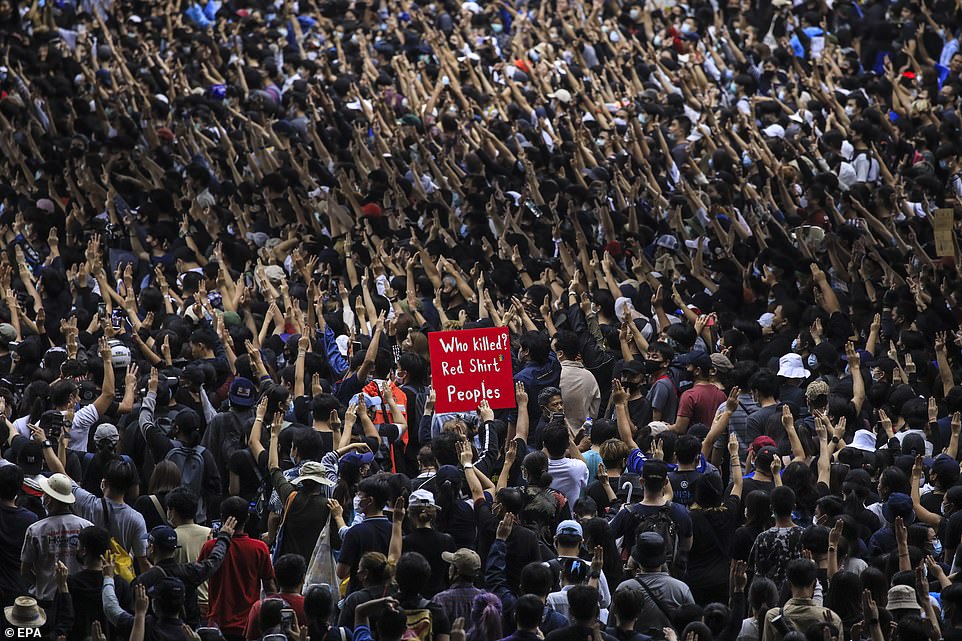 People took to the streets despite a state of emergency imposed by Prayuth on Thursday that outlaws Thais from assembling in groups of more than four.

They also appeared not to be cowed by a crackdown on their rally in central Bangkok on Friday night, in which riot police backed up by water cannons cleared the streets in about an hour.

No major injuries were reported from that confrontation but some demonstrators claimed that the water cannons had been laced with chemicals.

It was the first time in three months of sporadic protests that the authorities have employed such forceful tactics against the student-led movement. 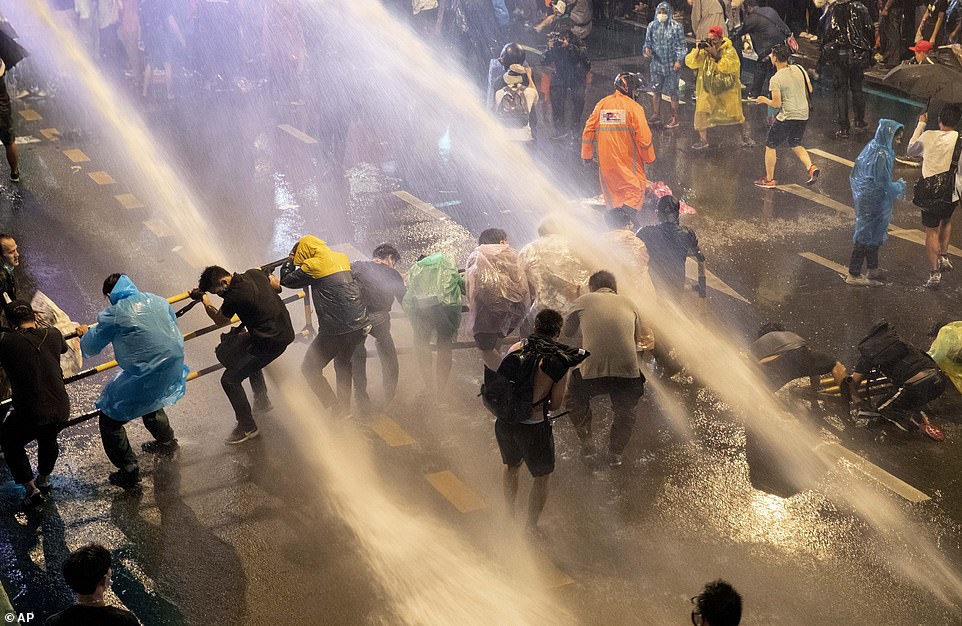 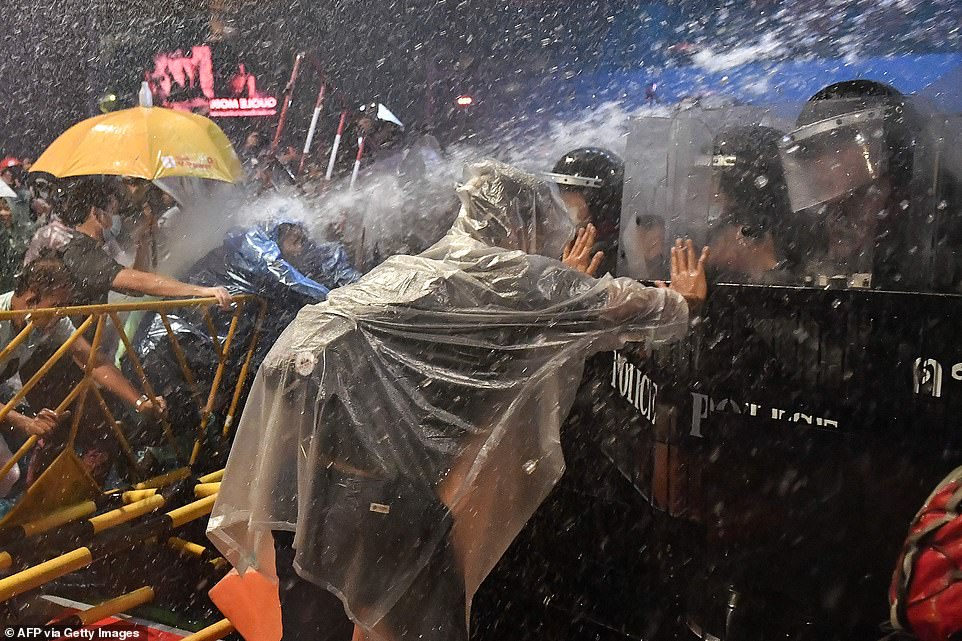 On Friday, protesters resisted police efforts to break up their demonstration, pushing back against riot shields, which police used to push back the crowd 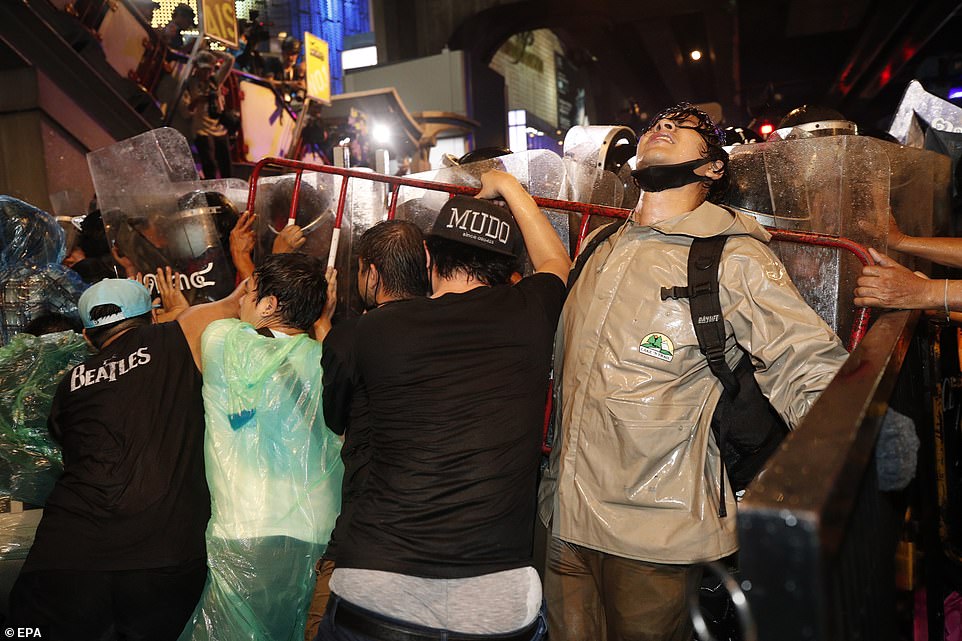 No injuries were reported following Fridays unrest, despite several scuffles breaking out between protesters and Thai riot police

A 20-year-old student who used the name Ryo said Friday night’s events had hardened his resistance.

‘I respect people’s political opinions, but after yesterday’s incident, I feel it was so harsh, perpetrating violence against unarmed people who had no weapons to fight back,’ he said.

Protective gear such as goggles was distributed on Saturday at some venues in anticipation of another attempt by police to break up crowds.

Friday night’s violent dispersal led the People’s Party, the protesters’ umbrella organisation, to declare in a statement that ‘the government and military have established themselves as the enemy of the people.’

Most of the group’s top leaders have been arrested over the last week, with legal aid group Thai Lawyers for Human Rights saying prior to Friday’s violence that at least 51 people have been arrested since Tuesday in connection with the protests.

The protesters have been doing their best to elude the authorities, using social media to assemble followers before police have time to block them. 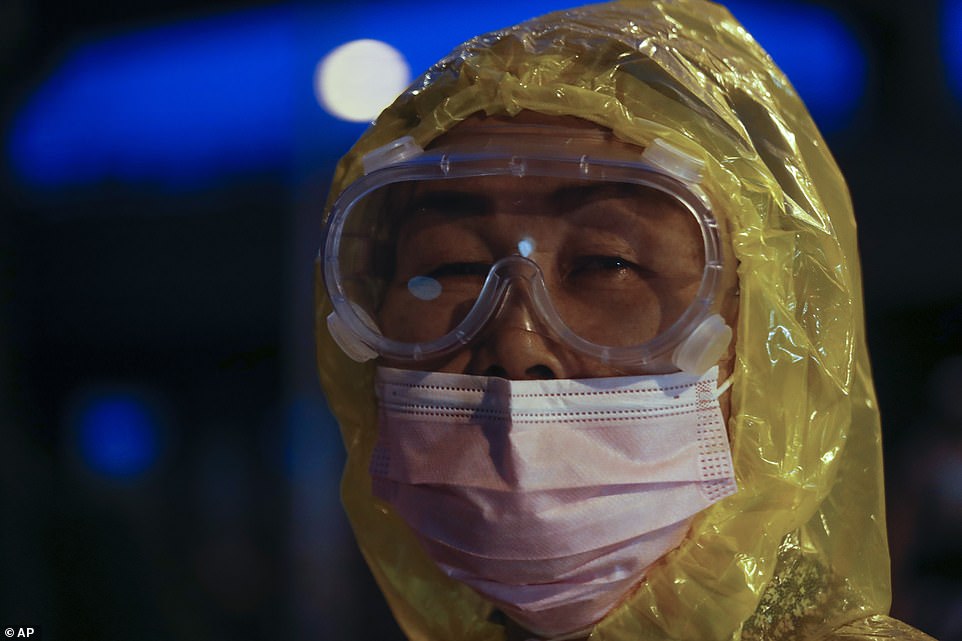 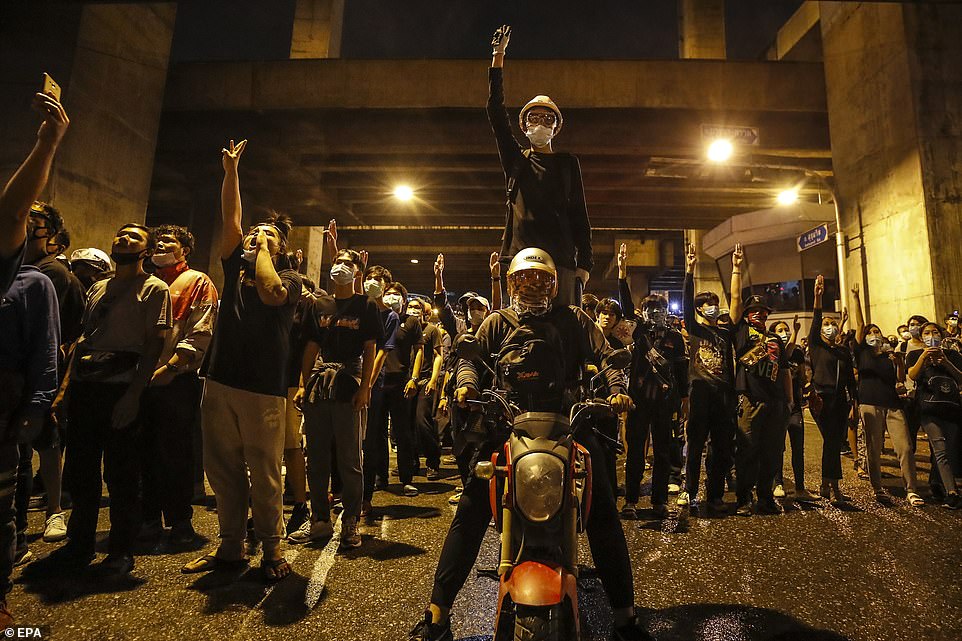 Rallies continued on Saturday despite the shutting down of some of Bangkok’s transport system. The organisers issued a fresh advisory for followers to gather at three stations outside the city’s central area, where access was easier 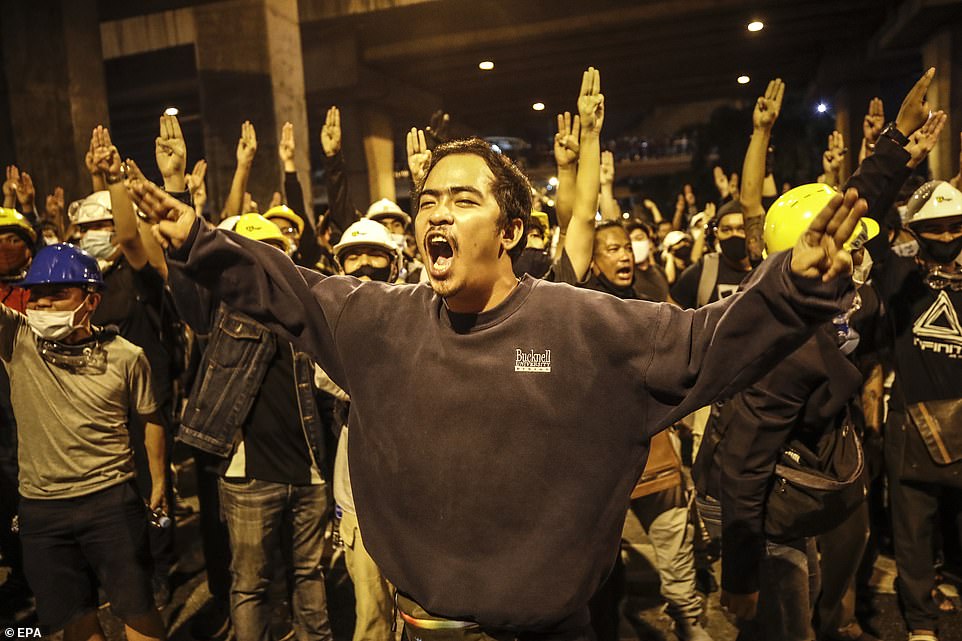 The youth-led protest movement is gathering pace amid the ongoing coronavirus pandemic, prompting Prime Minister Prayut Chan-ocha to declare a state of emergency in an attempt to prevent people gathering and – some say – to silence dissent 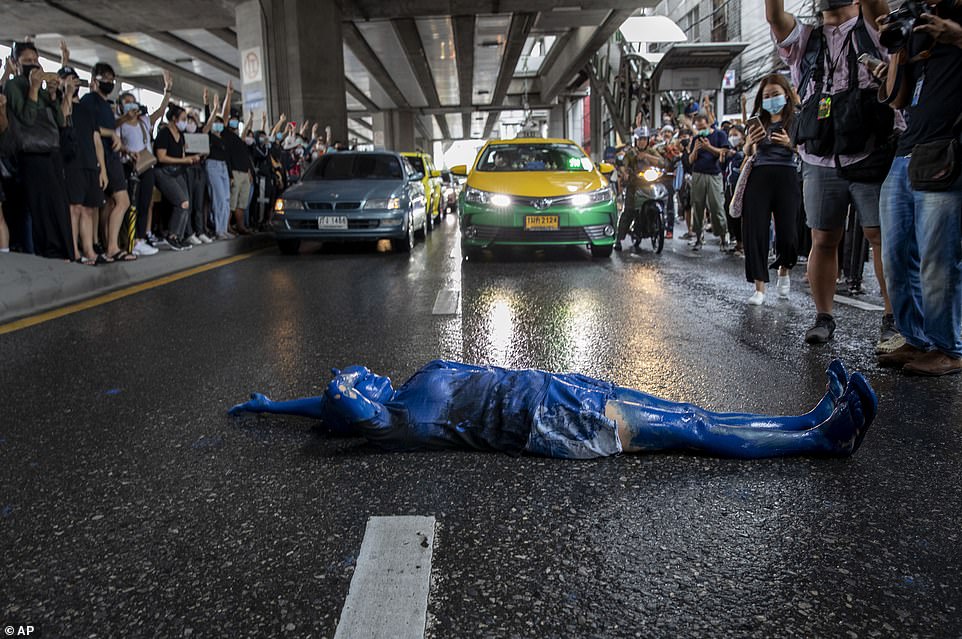 A pro-democracy protester covered in blue paint lies on a road in Bangkok, blocking traffic. A night earlier, police used water cannons on protesters, some of who claimed the blue liquid was laced with chemicals

The government has announced plans to take legal action against Twitter and Facebook accounts that announce the protests, but fresh calls to action were posted Saturday irregardless.

Demonstrators charge that Prayut, who as army commander led a 2014 coup that toppled an elected government, was returned to power unfairly in last year’s general election because laws had been changed to favour a pro-military party.

The protesters say a constitution promulgated under military rule and passed in a referendum in which campaigning against it was illegal is undemocratic.

The call by the protesters for reform of the monarchy has significantly raised the political temperature in Thailand, angering many older conservative Thais for whom any critical discussion of the royal family is tantamount to treason.

Thailand’s modern political history is dotted with periods of violent civil unrest and more than a dozen military coups but such vocal criticism of the monarchy is almost unprecedented. 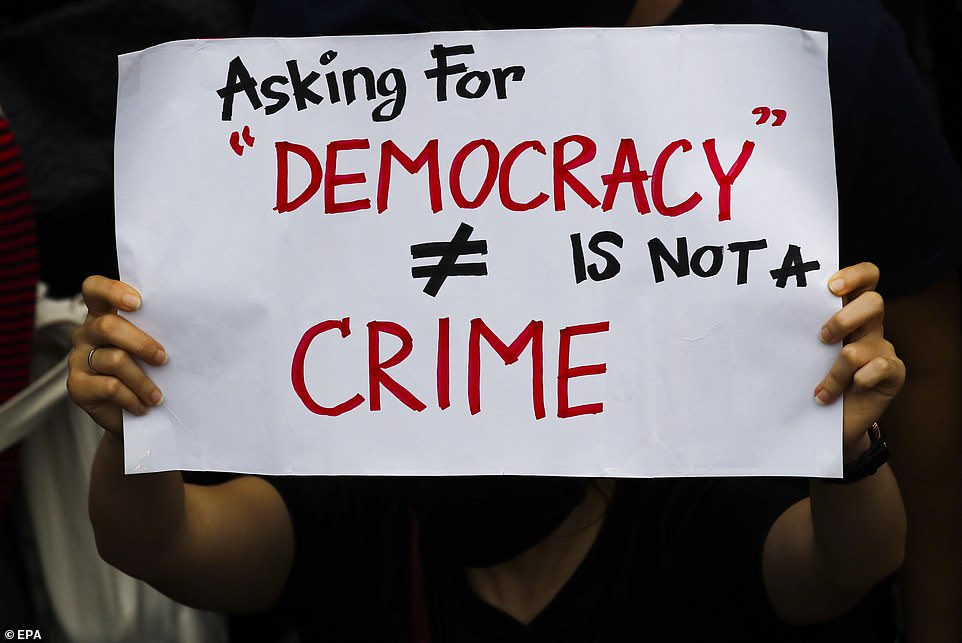 Most of the group’s top leaders have been arrested over the last week, with legal aid group Thai Lawyers for Human Rights saying prior to Friday’s violence that at least 51 people have been arrested since Tuesday in connection with the protests 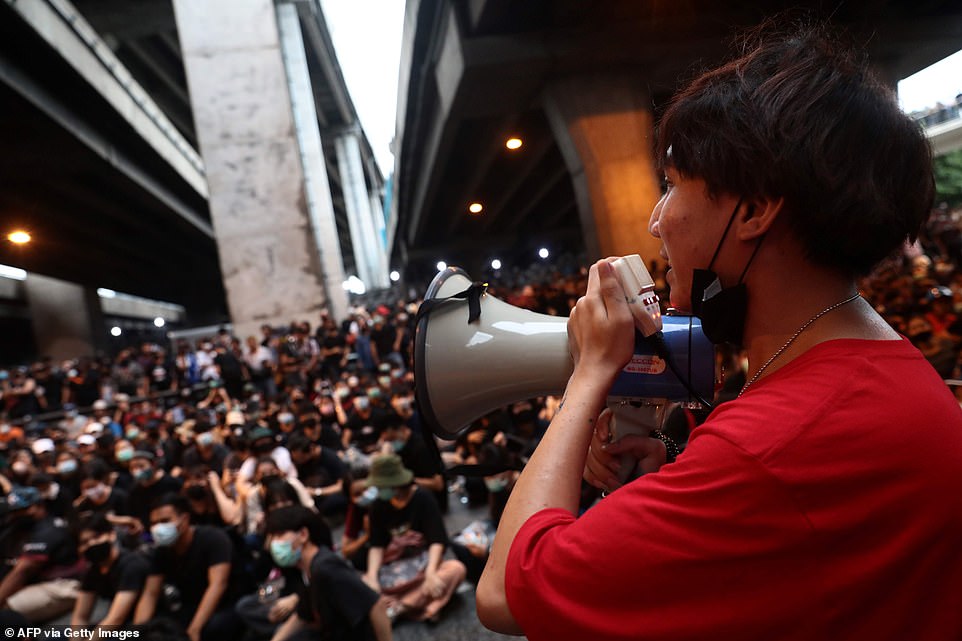 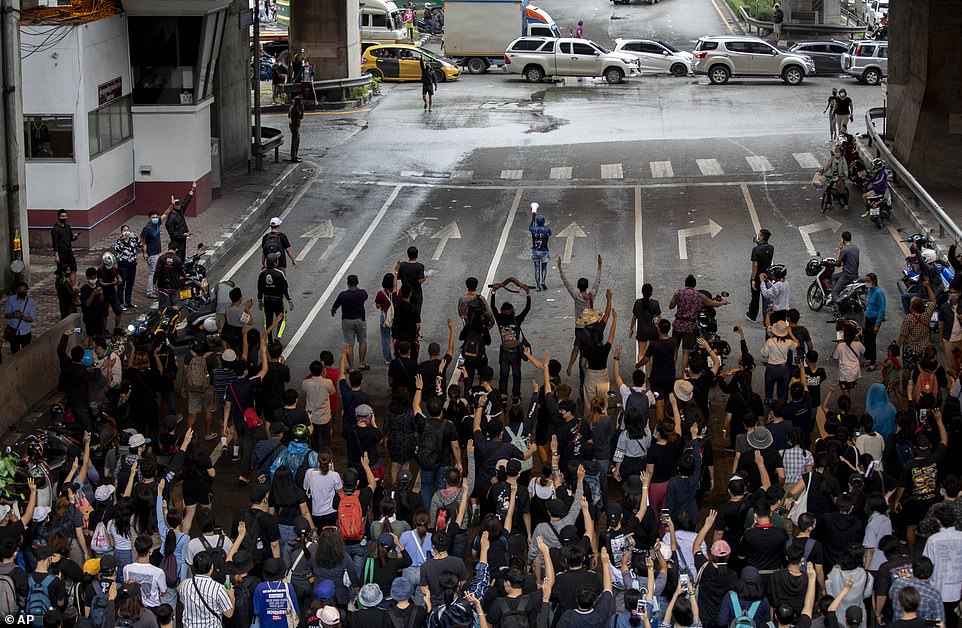 A heavy police presence was largely absent from the rallies on Saturday, following a night of violent clashes with demonstrators, authorities did not attempt to physically break up crowds even when protesters began marching in the streets 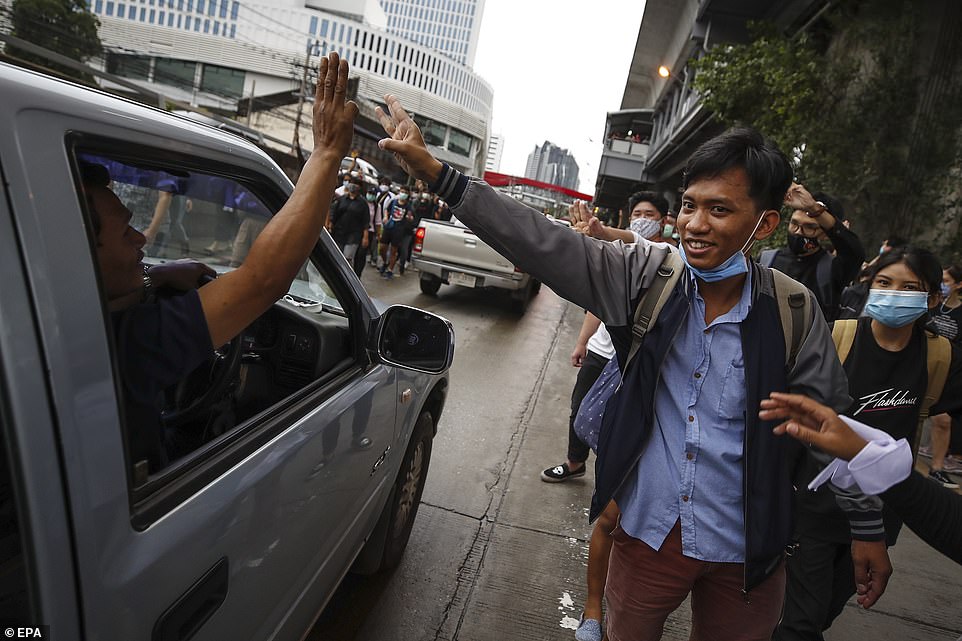 King Maha Vajiralongkorn and other key members of the royal family are protected by a lese majeste law that has regularly been used to silence critics who risk up to 15 years in prison if deemed to have insulted the institution.

Prayut’s declaration of a state of emergency said the measure was necessary because ‘certain groups of perpetrators intended to instigate an untoward incident and movement in the Bangkok area by way of various methods and via different channels, including causing obstruction to the royal motorcade.’

He was referring to an incident Wednesday that showed some members of a small crowd heckling a motorcade carrying Queen Suthida and Prince Dipangkorn as it slowly passed.

On Friday, two activists were arrested under a rarely-used law prohibiting violence against the queen for their alleged part in the incident. It is not clear why they two were singled out but they could face up to life in prison if convicted. They denied any wrongdoing.

Later that day, Thailand banned petition platform Change.org after hosting a petition to have King the king declared persona non grata in Germany – where he spends most of his time.

The Ministry of Digital Economy and Society said the contents of the petition – which had gained nearly 130,000 signatures before the site was blocked – violated Thailand’s Computer Crime Act.

Also on Friday, Prayut said in an address that his government hopes it could drop the state of emergency ahead of its normal 30-day duration ‘if the situation improves quickly.’

He reiterated that he had no intention of standing down.

thegirlsunhttps://thegirlsun.com
Previous articleFauci says COVID-19 numbers would have to 'get really, really bad' before another national lockdown
Next articleCoronavirus update: The deadly SARS-CoV-2 virus ruin lives – how's your mental health?

Wales should scrap GCSE exams next summer and instead award grades on pupils' coursework and assessments, a testing regulator has said.Qualifications Wales said...
Read more
News

A judge today urged Phil Collins and his ex-wife to thrash out their differences over Zoom instead of going to trial over claims...
Read more
News

Wales should scrap GCSE exams next summer and instead award grades on pupils' coursework and assessments, a testing regulator has said.Qualifications Wales said...
Read more

October is Breast Cancer Awareness Month in the UK.And, Laura Whitmore, 35, and Megan Barton-Hanson, 24, have joined the line-up of stars posing in...
Read more

A Bangladeshi doctor has allegedly caught coronavirus three times, according to local reports that would mark a world-first.The medic — referred to only...
Read more

Hunter Biden’s alleged sex tapes and images showing him using drugs and engaging in sexual acts with several women have been uploaded on...
Read more
News