A DAD could be Britain’s coronavirus patient zero after catching the killer virus in January at a ski resort – a month earlier than the disease is understood to have started in the UK.

Daren Bland, 50, was skiing at Ischgl, Austria from January 15 to 19 with three pals before returning to the UK where he gave the infection to his wife and children in Maresfield.

Read our coronavirus live blog for the latest news & updates

A virus then spread through the East Sussex town in the weeks leading up to February half term, while the three skiing friends also fell ill after returning to Denmark and the US.

If official tests confirm Daren did catch coronavirus while at the resort, that would mean Britain’s outbreak started a month earlier than previously thought, The Telegraph reports.

The first recorded case in the UK was January 31, with the earliest case caught within the country on February 28.

An investigation is now underway at the resort amid fears they covered up the outbreak – allowing the killer virus to then spread across Europe, which has seen cases rocket. 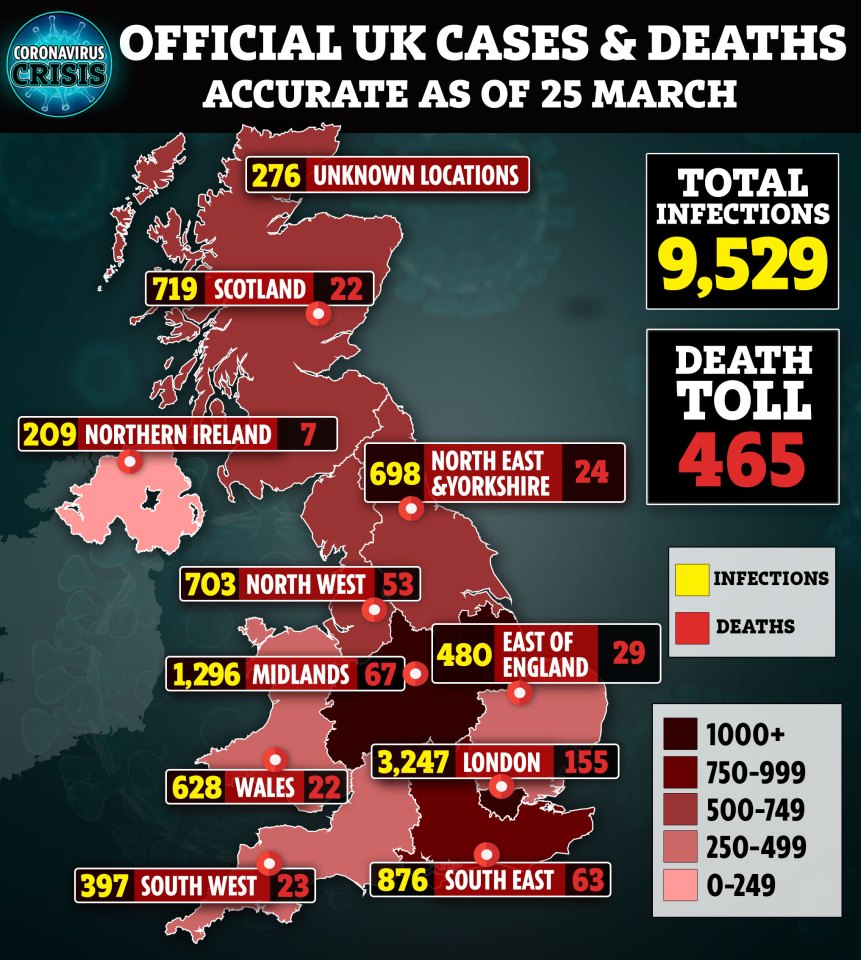 IT consultant Daren told the newspaper he had a drink at the Kitzloch bar at the resort, which was visited by a string of European victims.

He added: “We visited the Kitzloch and it was rammed, with people singing and dancing on the tables.

“People were hot and sweaty from skiing and waiters were delivering shots to tables in their hundreds. You couldn’t have a better home for a virus”.

The dad then returned to Maresfield on January 19 and fell ill the next morning with coronavirus symptoms.

He was ill for ten days and unable to work after being “knocked for six” and “breathless”. 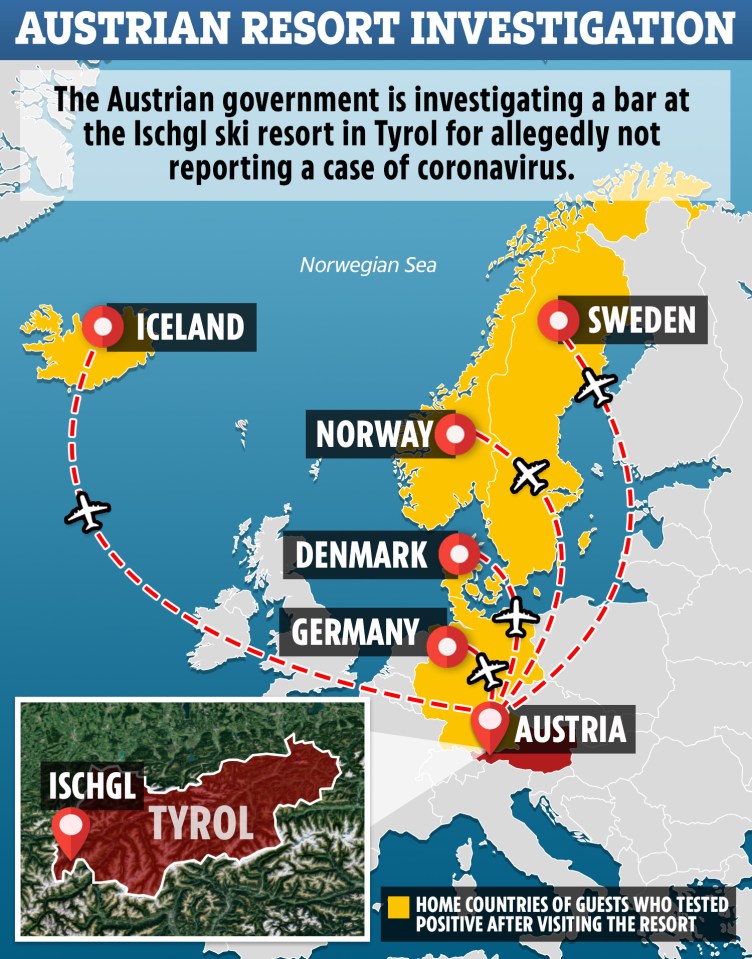 Wife Sarah Bland, 49, said: “I was then ill and so was my youngest daughter. My symptoms were a temperature and strange flushes, exhaustion which lasted for nearly three weeks intermittently and total brain fog.

“My daughter had a temperature and persistent cough and was off school for two weeks. My eldest daughter felt wiped out for a day but it passed quickly.”

The family have not officially been confirmed as having Covid-19 but are calling for a test so experts can “better understand” the spread of the disease.

CORONAVIRUS CRISIS – STAY IN THE KNOW

Don't miss the latest news and figures – and essential advice for you and your family.

To receive The Sun’s Coronavirus newsletter in your inbox every tea time, sign up here.

Get Britain’s best-selling newspaper delivered to your smartphone or tablet each day – find out more.

It emerged two days ago that a probe had been launched into the ski resort, which has been dubbed the Ibiza of the Alps due to its wild apres ski parties.

A German barman reportedly fell ill in February but it is alleged the slopes and bars at the resort stayed open.

The resort has now been linked to hundreds of cases in Germany, Norway, Sweden, Iceland, Denmark and other parts of Austria.

Visitors from all over Europe began testing positive for the killer bug after returning from the town in early March.

MOST READ IN NEWS


Mum, 36, dies 'of coronavirus' after paramedics said she was 'not a priority'


Tragic teen killed herself as she couldn't face coronavirus isolation

'LIGHT OF OUR LIVES'


Parents' tribute to girl, 7, stabbed to death in park on Mother's Day


The 4 mild symptoms of coronavirus you should not ignore

The bar was not shut until March 10 and the town was closed on March 13.

German media have branded the resort “the breeding ground” of coronavirus.

Europe has become the epicentre of the pandemic as more than 100,000 people are confirmed to have been infected across the continent – with Italy the worst-affected country.

The popular Ischgl resort, in the province of Tyrol, Austria has been branded a ‘breeding ground’ for coronavirus cases in Europe[/caption]

Authorities sealed the village in March, weeks after a barman reportedly fell ill[/caption] 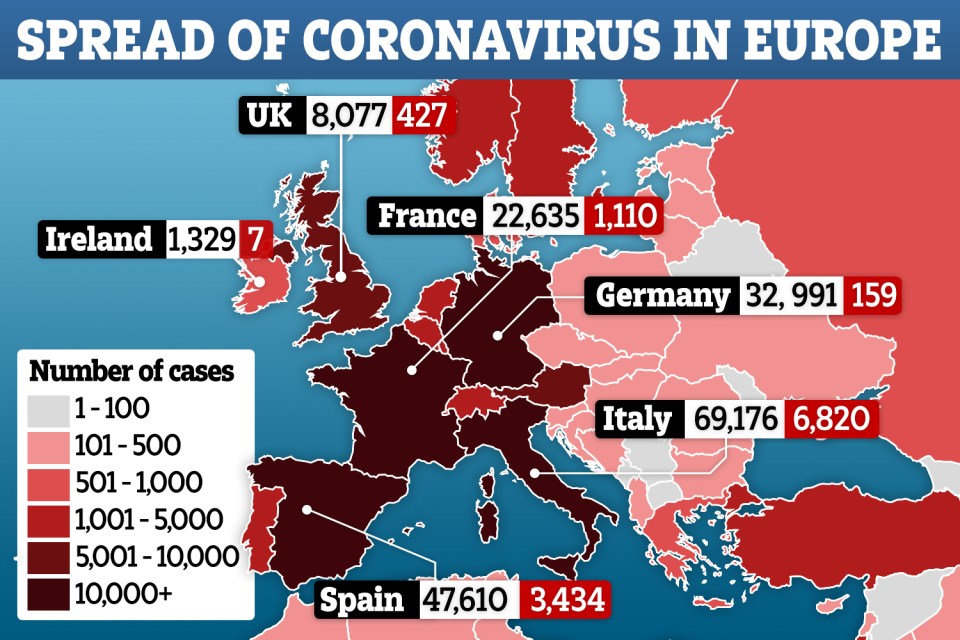 What time is Vanderpump Rules season eight on Bravo and who is in the cast?

Kim Kardashian suggests 'fun things' for fans to do… including 'try...

Kim Kardashian suggests 'fun things' for fans to do… including 'try...