My pelvis thumps against the floor for the fifth time in five minutes. I push hard against the rubber mat under my palms, willing the rest of my body to magically rise upwards. But my arms are mashed potato.

‘I… can’t… get… back up,’ I moan between strained breaths. I’m crumpled on the floor of East London fitness studio Strong And Bendy, where owner and personal trainer Rhian Cowburn is trying to teach me how to master a press-up.

Even though I perfect the most animalistic of yoga positions over the lockdown period, my upper-body capabilities remain embarrassingly feeble. So I set myself a challenge: to become a press-up pro in one week. 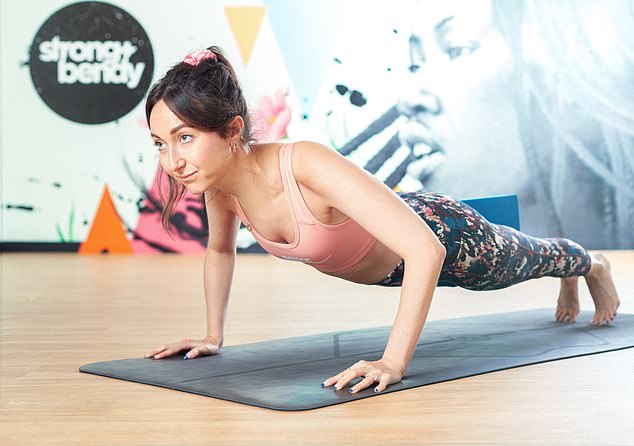 But despite colleagues’ assertions that ‘everyone can do press-ups!’, apparently I can’t even manage one. Rhian, who last week broke a world record for upper body exercises, tells me few women can press-up easily, because they have just over half the chest muscles of men.

I still feel pathetic, so why am I subjecting myself to this humiliation?

A raft of recent studies suggest that perfecting the push-up could be the key to a long, healthy life. According to a paper published last year by University of Harvard researchers, accomplishing ten consecutive press-ups dramatically reduces the risk of developing heart disease in older adulthood.

If you’re strapping enough to do 40 in a row, you’re 96 per cent less likely to develop the condition – the UK’s second-biggest killer, behind dementia.

In fact, time spent doing press-ups has been shown to be a more reliable indicator of long life than commitment to a host of other activities, including running, squatting and weight-lifting, according to a recent British study involving 8,000 adults. So, it’s hardly surprising that the press-up has long been considered a hallmark of basic fitness – they are partly responsible for keeping Prince Charles in impressive nick at 71. He does them for one minute straight, twice a day.

‘Press-ups are a unique movement in that they require a combination of important physical processes,’ says Professor Michael Gleeson, an expert in exercise biochemistry at Loughborough University.

‘Doing a few on the trot doesn’t only indicate strength in the arms, core, chest and legs, but relatively good cardiovascular fitness because it requires muscle endurance – which is inherently linked to the cardiovascular system.

‘It also means you have a healthy body size as you won’t be able to lift yourself if you’re too heavy.’

I am slight – weighing roughly eight stone – but this doesn’t appear to give me a head start. Three days into my challenge (I’ve been practising every day for 20 minutes at home), I can just about manage the ‘cheat’ push-ups that Rhian recommended – pushing up from the kitchen counter.

I do about ten before my shoulders ache so much that the washing-up becomes a more attractive evening activity.

Luckily, a closer look at the research suggests it’s not only press-ups that matter when it comes to longevity. Grip strength, walking speed and going from sitting to standing without using your hands can all be indicators of healthy older age.

All of these capabilities have one thing in common: they indicate the strength of your muscles. And a growing body of evidence shows that maintaining strength in older age is perhaps more protective against common age-related conditions than cardiovascular fitness.

Prof Gleeson says: ‘If your muscles are stronger, you’re more likely to be mobile and active in older age, so might engage in more exercise, which has obvious benefits for cardiovascular health. 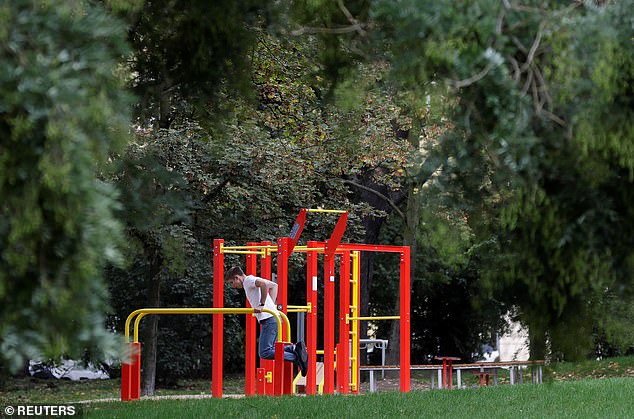 ‘Age-related muscle wastage, known medically as sarcopenia, can send people downhill quickly – it’s usually the root cause of fatal falls and trips, and stops them being able to live independently, which is a big risk factor for premature death,’ he says.

It’s why that NHS guidance recommends adults do at least two 20-minute muscle-training sessions a week – yoga or Pilates, as well as simply walking up and down stairs, digging in the garden and, of course, doing push-ups.

Meanwhile, on my fifth day of practice I progress to the second movement that, sadly, is still not a press-up. I keep my knees on the ground but adopt the same standard position – hands a little wider than shoulder-width apart and keeping my chest in line with my hips. Success! Sort of.

I do two – but getting back up is still a struggle. On the sixth day, I manage to lightly touch the floor with my chest and heave myself back up. And not from my knees.

It feels like an awful lot of effort for one movement and I ask Rhian if I should bother persevering.

‘A lot of this is genetic – some people are born with fewer muscles, so find it harder,’ she appeases me.

‘Just concentrate on getting down to the floor, slowly, for now. Don’t worry about getting back up.’

That’s just as well then.

thegirlsunhttps://thegirlsun.com
Previous articleCarol McGiffin claims it's NOT up to the Queen to 'set an example' by wearing face makk
Next articleJonathan Cheban takes his mom to Nobu in Malibu before Kim Kardashian's 40th birthday bash

Coronavirus cases are rising in 79% of US states and territories, CDC director warns

Coronavirus cases are on the rise in nearly 80 percent of US states and territories, a top US official warned on Friday. 'New #COVID19...
Read more
Health

DR MICHAEL MOSLEY: All I want for Christmas is a vaccine

With just two months until Christmas, it is time to start thinking about presents. This year, what I would love to give my...
Read more
Health

If 95 percent of Americans wore masks consistently, nearly 130,00 lives could be saved between now and March 2021, a new study suggests. Without...
Read more
Health

FDA to let AstraZeneca's coronavirus vaccine trials resume in the US

US regulators said on Wednesday that AstraZeneca can resume the US arm of its trial of Oxford University's coronavirus vaccine, according to documents...
Read more

Nelson's (above) triumph at Trafalgar gave Britain control of the seas and laid the foundation for...
Read more

Joe Cole claims Manchester City will have been 'given a lift'...
Read more

Strictly Come Dancing has released a fun teaser ahead of the celebrities' ballroom debuts on Saturday's show.Taking to Twitter, the hit BBC One programme...
Read more

Is THIS the location for the John Lewis Christmas advert?

Is THIS the first look at the John Lewis Christmas advert?...
Read more