They’re prepping to perform the first couple’s choice of the series on Saturday night.

And Nicola Adams, 38, shared a glimpse into her final rehearsal with dancing partner Katya Jones, 31, as she posted a hilarious clip of them larking around to Instagram on Thursday.

In the cheeky video, the former boxer is seen showing off her dance moves, which don’t go down too well with ‘panicking’ pro Katya. 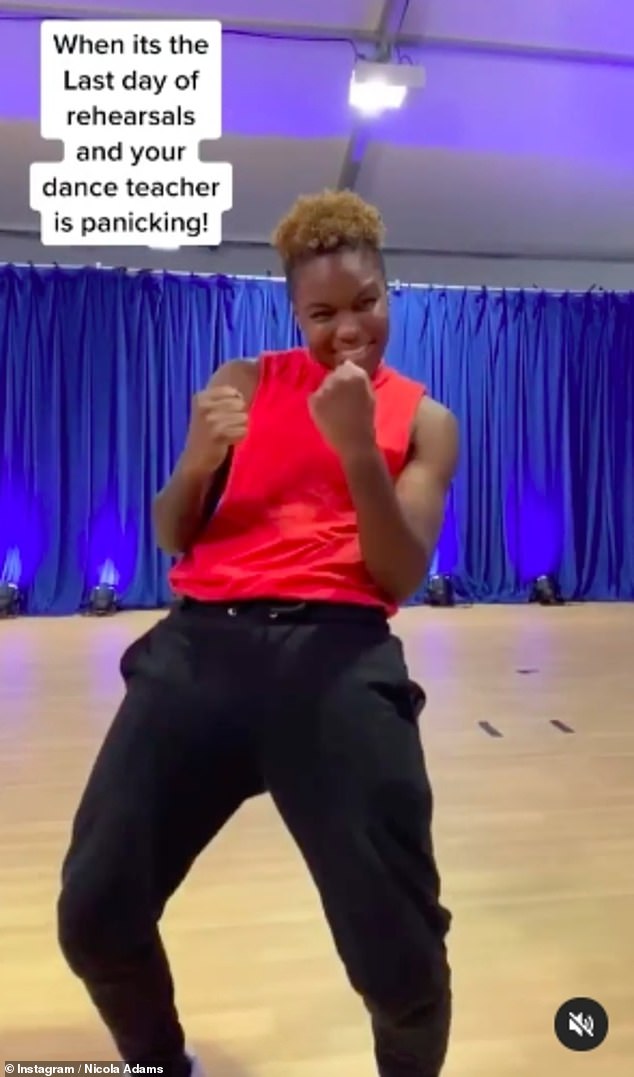 Cheeky! Strictly’s Nicola Adams shared a glimpse into her final day of rehearsals as she posted a hilarious video to Instagram on Thursday

Nicola kicks off the clip by throwing her arms up in the air and then pulling them down with her hands clenched into fists.

However as she turns to ask Katya if she had nailed the moves, the dancer is seen jumping into the frame and shaking her head.

The pro grabs her hair and puts on an animated display as she acts stressed before stomping off to the other side of the room.

At this point Nicola can hardly keep a straight face and struggles to hold back her giggles as a caption reads ‘chill ma!’ 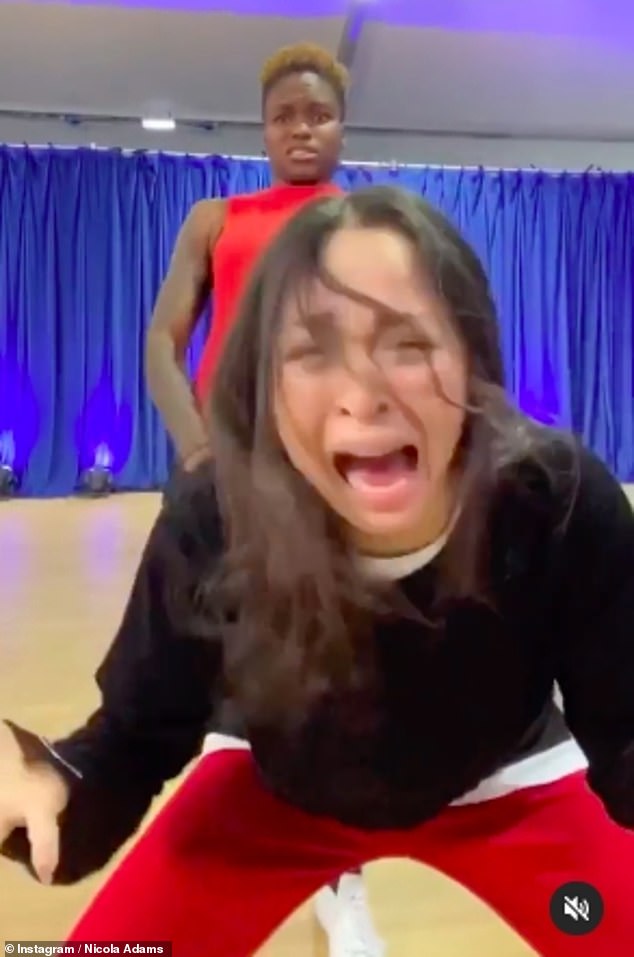 Joker: The former boxer joked that Katya was ‘panicking’ as they wrapped up their last rehearsal before Saturday’s show

Nicola captioned her entertaining clip: ‘When it’s the last day of rehearsals and @mrs_katjones is panicking’

Earlier in the day Nicola took to Instagram Stories to joke that her pro partner had ‘actually given her a lunch break’ during rehearsals.

Katya then jokingly replied: ‘Actually! Because you’re not giving me enough, I need to feed you.’

The dancing duo were also seen posing for a selfie with It Takes Two presenter Zoe Ball on Thursday.

The athlete, who turned 38 on Monday, appeared to be in good spirits as she held up a birthday boxing belt for the camera. 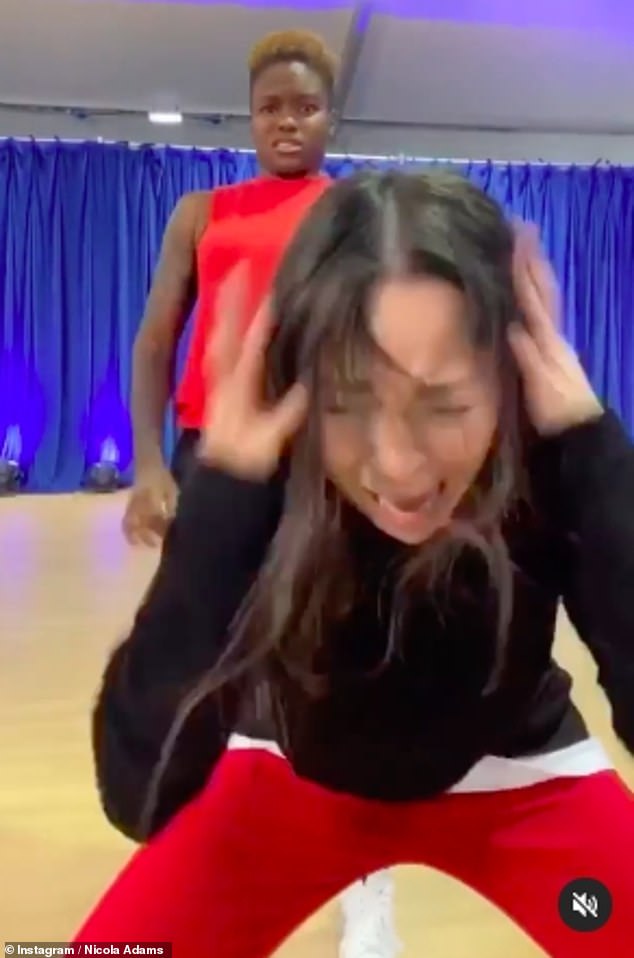 Still some work to do? Katya grabbed her hair before jumping out of the camera frame 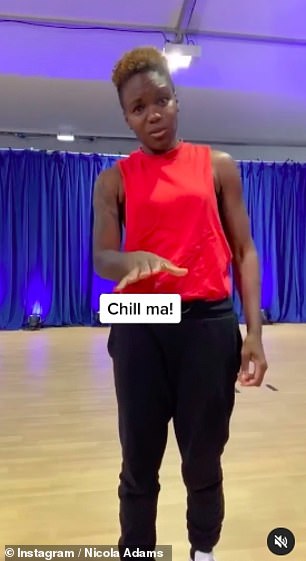 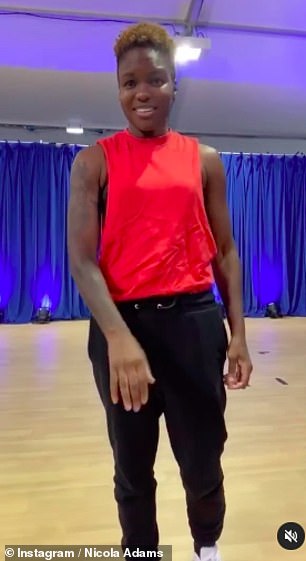 Larking around! Nicola was then seen saying Katya needed to ‘chill ma!’ before starting to smile as the short clip ends

Earlier this week, the BBC series released the stars’ songs and dances for week two of the hit competition.

Nicola and Katya, who have made history as the show’s first-ever same-sex couple, will perform a couple’s choice to Shine by Years & Years.

Caroline Quentin and Johannes Radebe, meanwhile, will do a feisty Paso Doble to El Gato Montes by Ramon Cortez.

JJ Chalmers and Amy Dowden are also set to perform a Paso Doble to Believer by Imagine Dragons, while Jacqui Smith and Anton Du Beke will face a huge challenge in the form on an energetic samba to Help Yourself by Tom Jones.

Clara Amfo and Aljaž Škorjanec plan to raise the roof by dancing the Viennese waltz to Saygrace’s You Don’t Own Me, while HRVY and Janette Manrara will execute the same dance to Stuck With U by Ariana Grande and Justin Bieber. 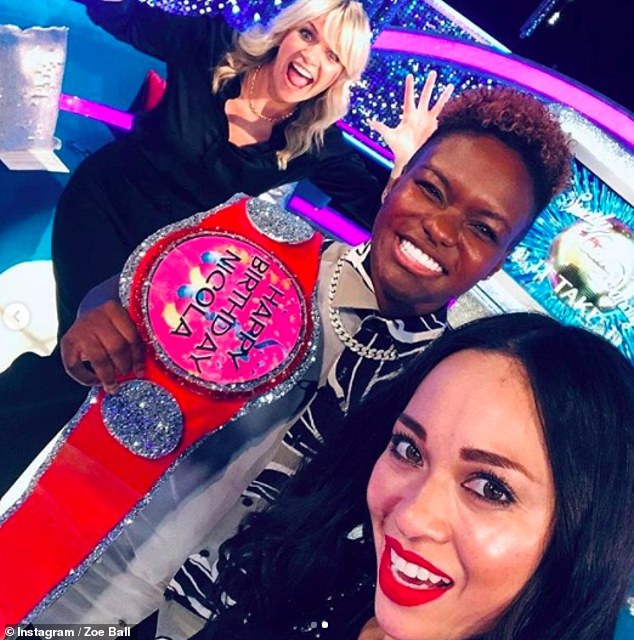 Celebration! Zoe Ball shared a selfie with Nicola and Katya on Thursday, with the athlete holding up a special birthday belt 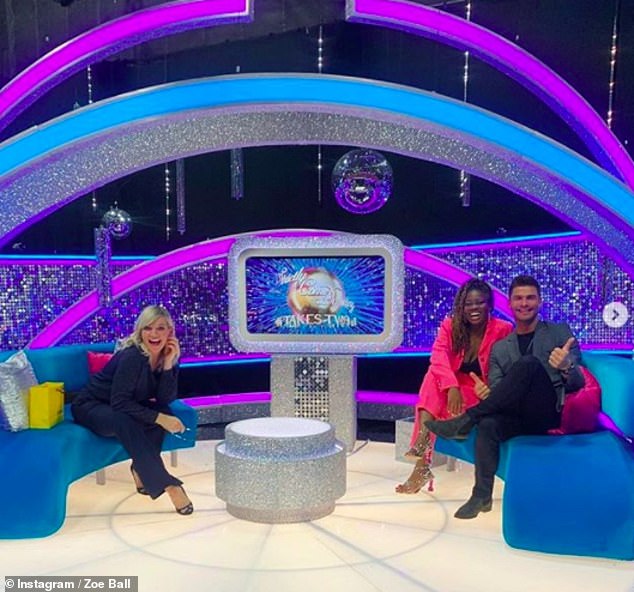 It’s back! The It Takes Two Host also appeared to be in good spirits as she chatted to Clara Amfo and Aljaz Skorjanec

Fighting to stay on the top part of the leaderboard are Maisie Smith and Gorka Márquez, who will hit the dancefloor with a feisty tango to Midnight Sky by Miley Cyrus.

Ranvir Singh and Giovanni Pernice are going head-to-head with Bill Bailey and Oti Mabuse as both duos will be performing a tricky quickstep.

Meanwhile, Jamie Laing and Karen Hauer will perform the American smooth to Night and Day by Frank Sinatra.

Max George and Dianne Buswell are expected to be dancing an energetic jive to The Monkees’ I’m A Believer, while Jason Bell and Luba Mushtuk will lit up the room with a fiery salsa to Get Lucky by Daft Punk feat. Pharrell Williams and Nile Rodgers. 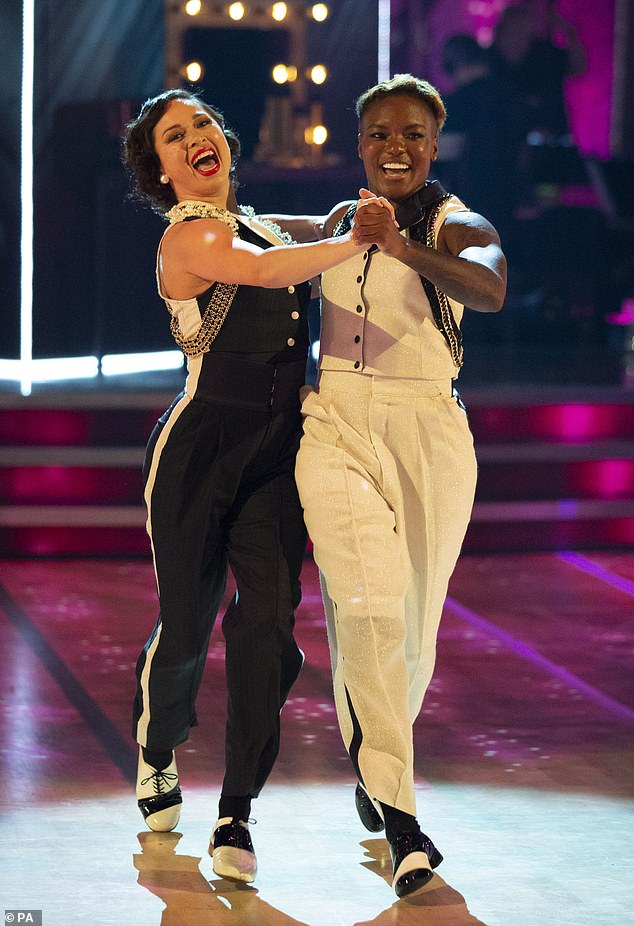 Exciting times ahead: Nicola and Katya, who have made history as the show’s first-ever same-sex couple, will perform a couple’s choice to Shine by Years & Years (pictured last week)

thegirlsunhttps://thegirlsun.com
Previous articleFelon's 'crazy' fiancée screams at him outside of the DMV on Love After Lockup
Next articleMike Tyson struggled to get back in the ring after last career loss ahead of Roy Jones Jr fight

Rebel Wilson shows off her cleavage and slimmed-down frame in a...
Read more
Tv & Show

Dame Kelly Holmes reveals she is suffering from coronavirus