The Girl Sun
Home Sport SPFL chief Neil Doncaster back on the radar for top job in the...
Sport

By Stephen Mcgowan For The Scottish Daily Mail

The English Football League have placed Neil Doncaster back in the frame to be their next Chief Executive.

A divisive figure amongst Scottish fans, the SPFL chief was first contacted over the £450k post when Shaun Harvey left last year.

A lengthy search eventually ended in the EFL appointing David Baldwin after Doncaster opted to remain in Scotland. 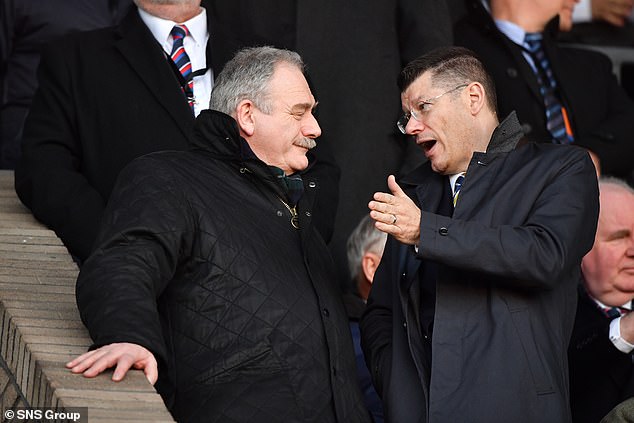 In a statement on Monday, however, Baldwin confirmed his intention to leave the role after just four months – citing the need to balance the needs of ‘family, health and wellbeing.’

The EFL begun the process of seeking a successor with immediate effect. And Sportsmail has learned that Doncaster will be once again be sounded out over his willingness to consider a return to English football.

EFL chairman Rick Parry was at the heart of controversy over Project Big Picture, the plans to reform the English football pyramid rejected by clubs on Wednesday.

League sources insist the subsequent row is not the reason for Baldwin’s decision to leave next year. A former Burnley Chief Executive, the demands of running a league are significantly different to those of running a club and – after eleven challenging years in charge of the SPFL – London-born Doncaster will be a frontrunner on any list of potential replacements

Despite calls from Rangers for immediate his suspension over the disputed curtailment of the last SPFL season and criticism of the failure to secure a replacement title sponsor when Ladbrokes left the scene, Doncaster has largely managed to retain the support of Scottish clubs after securing a new £125million five-year broadcasting deal with Sky Sports. And, despite his young family living in England, the timing of a return to English football looks less than ideal.

While a general meeting of the SPFL on Monday will seek an elusive agreement between clubs over how best to curtail this season if covid-19 makes it impossible to continue, EFL clubs are now in a state of flux over a £50million bail-out package offered by the Premier League after Project Big Picture was shot down in midweek.

'It's BONKERS!' Government blasted for 'ludicrous' policy that bans football fans from grounds

Clubs and fans up and down the country are calling out culture secretary Oliver Dowden for his 'bonkers' policy banning fans from stadiums,...
Read more

Police officer found 'brain matter' on pavement after man was lured into an ambush, court hears

He's embarrassed her with numerous affairs, a child with another woman and reports that he harassed women — so it's hardly surprising that...
Read more

Lauren Goodger showcases her curves in a pink and orange thong...
Read more

Joseph Wu, foreign minister of Taiwan, has warned the Island is “on the front line” of an expansion of the Chinese regime. China regards...
Read more

Rochelle Humes admits son Blake is 'the easiest' of her brood

So when is frozen or tinned better than fresh? Our expert dietitian reveals

Canned and frozen foods tend to be seen as less nutritious than fresh versions — but that’s not always the case.According to a...
Read more