She never fails to command attention in her eye-catching designer looks on hit show Selling Sunset.

And now Christine Quinn, 31, has revealed that her enviable wardrobe boasts ‘around 400’ pairs of shoes after she started collecting Louboutins when she was 21.

The star told Vogue she felt she’d been too reserved during the first season of the hit Netflix show, as she worried about ‘being taken seriously as a professional.’ 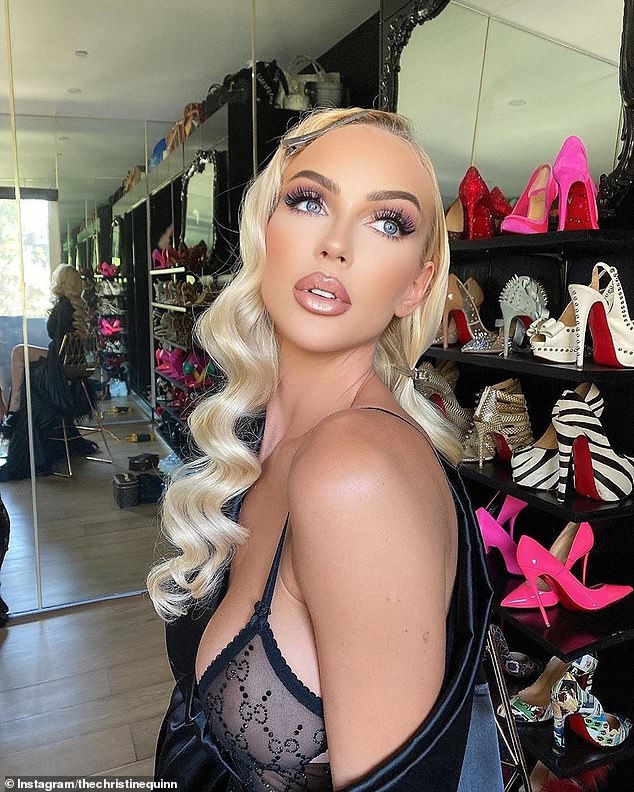 What a collection! Selling Sunset’s Christine Quinn has revealed she has an impressive 400 pairs of shoes, after she started collecting Louboutins when she was 21

Speaking about how she came across in the first season, Christine said she isn’t completely happy with her onscreen portrayal.

She said: ‘I guess my biggest regret was not totally being myself, and trying to worry about being taken seriously as a professional.

‘That was a little disheartening to go back and watch, and realise that I could have pushed the envelope a little bit more than I should have.’

The life-long fashionista, who is often seen in skyscraper heels in the show, also told the publication she has ‘around 400 shoes’ in her closet. 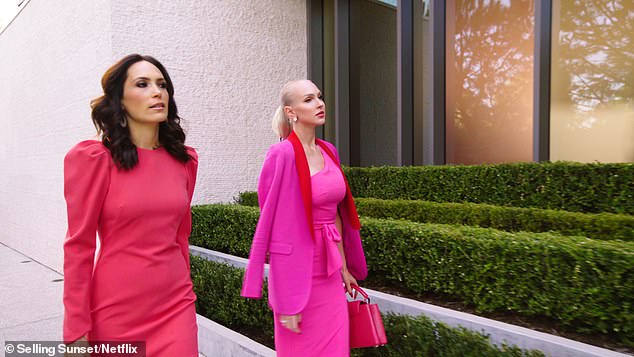 Standout: However the TV star revealed that it’s a ‘little disheartening’ to see herself in old episodes as she ‘wasn’t totally herself’ (pictured on the Netflix show)

Joking about the incredibly large number, she said: ‘For me it’s a problem, but it’s a good problem to have.’

Christine started collecting Louboutins since she was 21 and said she had been ‘dreaming’ of them since being a teenager when she couldn’t afford the price tag.

Of the famous red-soled shoes, Christine’s favourite has a whopping 6.3 inch heel and a 2.4 inch platform –  the Daffodile 160s.

And it’s not just heels which make up Christine’s collection. She also has around 75 pairs of flats, or ‘slippers’ which she wears between takes on Selling Sunset. 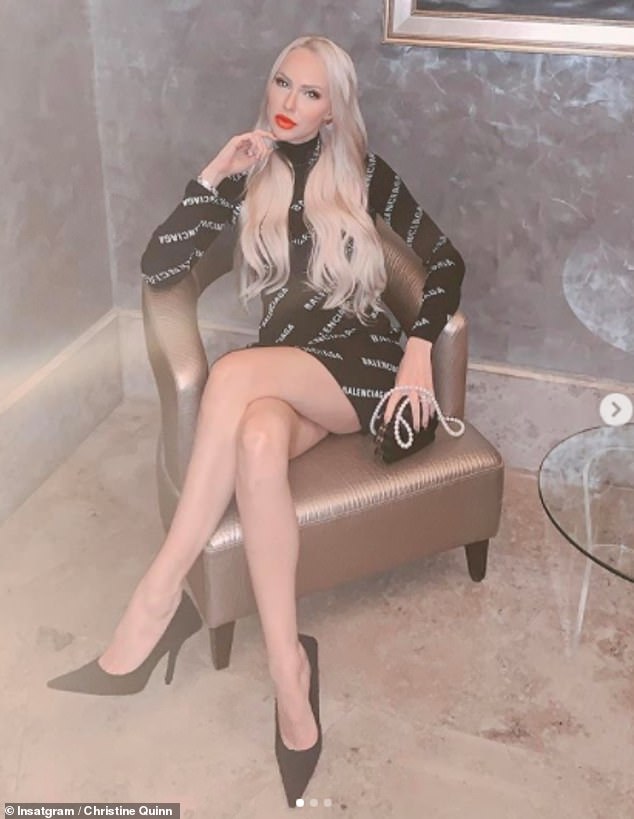 In the show, Christine is often seen in a trusty pair of stiletto heels when showing her potential buyers around mutli-million dollar properties.

However the thought of damaging expensive flooring in the homes doesn’t bother Christine, with her admitting she ‘cares more’ about her shoes than ‘those damn floors.’

Christine – who is often seen dripping in designer garb in her sizzling Instagram posts – also confirmed her three favourite designers.

She said she loves Louis Vuitton, especially anything by artistic director of menswear Virgil Abloh, Balenciaga and Gucci. 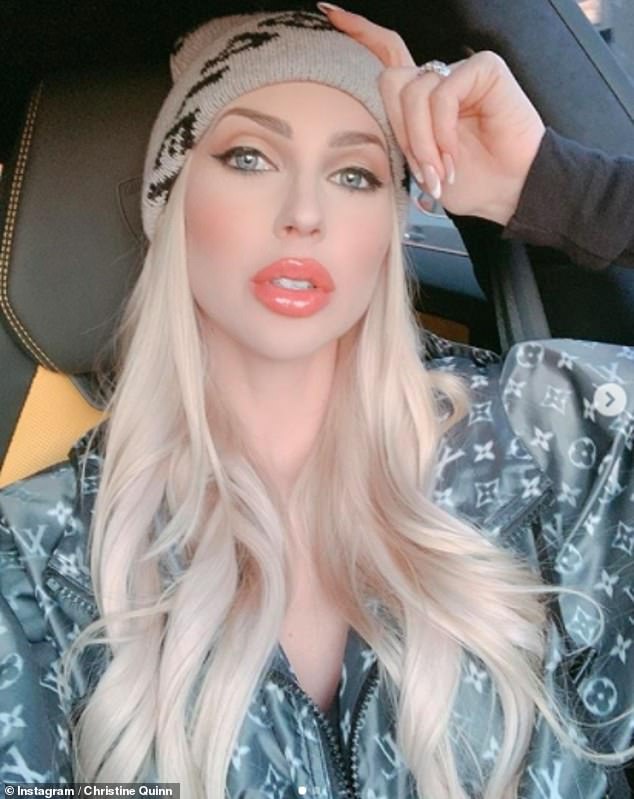 Loves: She added that her favourite luxury designers are Louis Vuitton, Balenciaga and Gucci (pictured in two of the three) 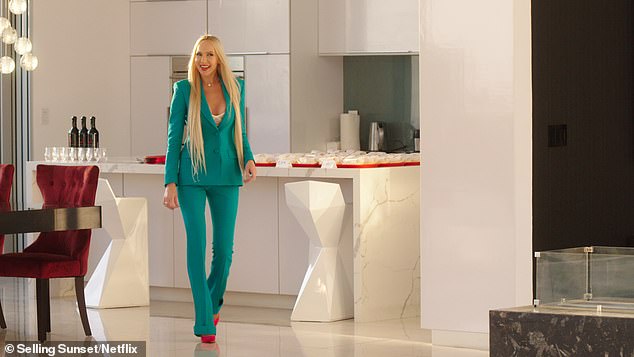 Standout: Christine never fails to catch the eye in her statement looks on Selling Sunset

Before she could afford the labels, Christine revealed would customise her own clothes and hand-me-downs from her sister.

The beauty has also shared her talent for making statement looks on the Netflix series and in season three helped fellow realtor Davinia change her look.

Christine said she told her co-worker that viewers wanted to be entertained by what they saw and suggested she shake up her style.

It comes after Christine refused during an interview with an Australian outlet to confirm rumours she made $9 million as the Oppenheim Group’s top realtor in 2019.

‘I don’t think that number’s quite true but I’ll take it,’ she told The Kyle and Jackie O Show.

Her net worth is reportedly $2 million, according to UK’s The Sun, while her husband’s net worth is valued at $20 million.

Quinn and Richard married last December in a gothic winter wonderland-themed wedding during the third season of Selling Sunset,

‘I always wanted to have more of a production than a wedding,’ Quinn explained to Kyle and Jackie O. ‘I wanted people to take away a different feeling and so that’s what I was really going for.’

Before starring in Netflix’s Selling Sunset, Quinn appeared in NCIS: Los Angeles and Hot Tub Time Machine as an actress. 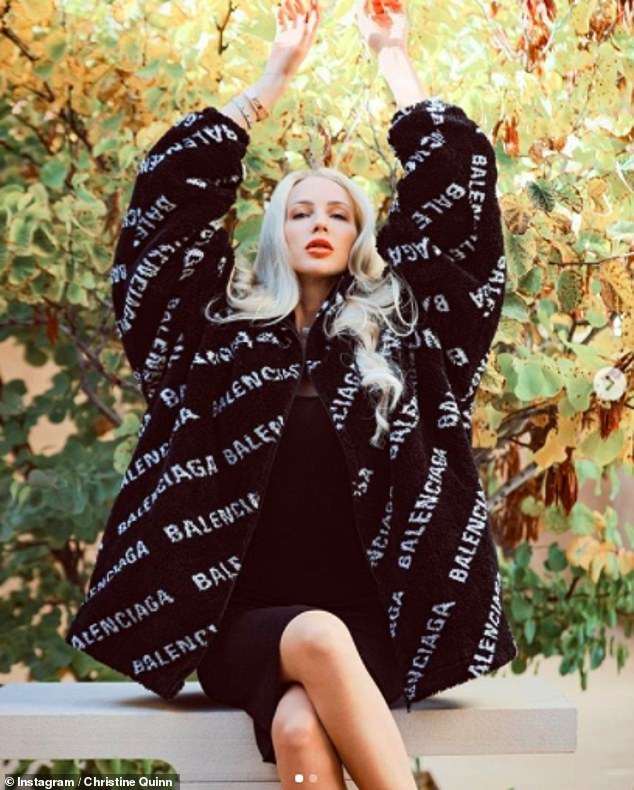 Big earner: It comes after Christine refused during an interview with an Australian outlet to confirm rumors she made $9million as the Oppenheim Group’s top realtor in 2019

thegirlsunhttps://thegirlsun.com
Previous articleTeenage boy, 17, is stabbed to death in east London – as murder toll in capital rises above 100
Next articleTour operators in half-term dash to find planes after Canaries are removed from quarantine list

America Ferrera announced her departure from NBC's Superstore earlier this year.And it appears that the big box sitcom is preparing to shut its...
Read more

With Windsor Castle and its 5,000-acre Great Park at her disposal, the Queen might seem better placed than most to weather the second...
Read more
News

Ryan Giggs' girlfriend has moved out of his £1.7million mansion and taken her puppy with her after the Wales manager allegedly attacked her...
Read more
Sport

Alex Song's eight-month footballing wilderness is over after signing with African outfit Arta Solar 7.The former Arsenal and Barcelona midfielder has been without...
Read more