Doctors are calling for a boycott of a popular Los Angeles-based scrubs brand for a ‘sexist’ promotional video that appears to disparage both women and osteopathic physicians.

FIGS has since apologized for and removed the video, which showed a female model wearing pink scrubs and an ID tag that labeled her as a DO, or Doctor of Osteopathic Medicine.

In addition to modeling the scrubs, the doctor walked out in front of the camera holding a ‘Medical Technology for Dummies’ book — which, to add insult to injury, she was reading upside-down. 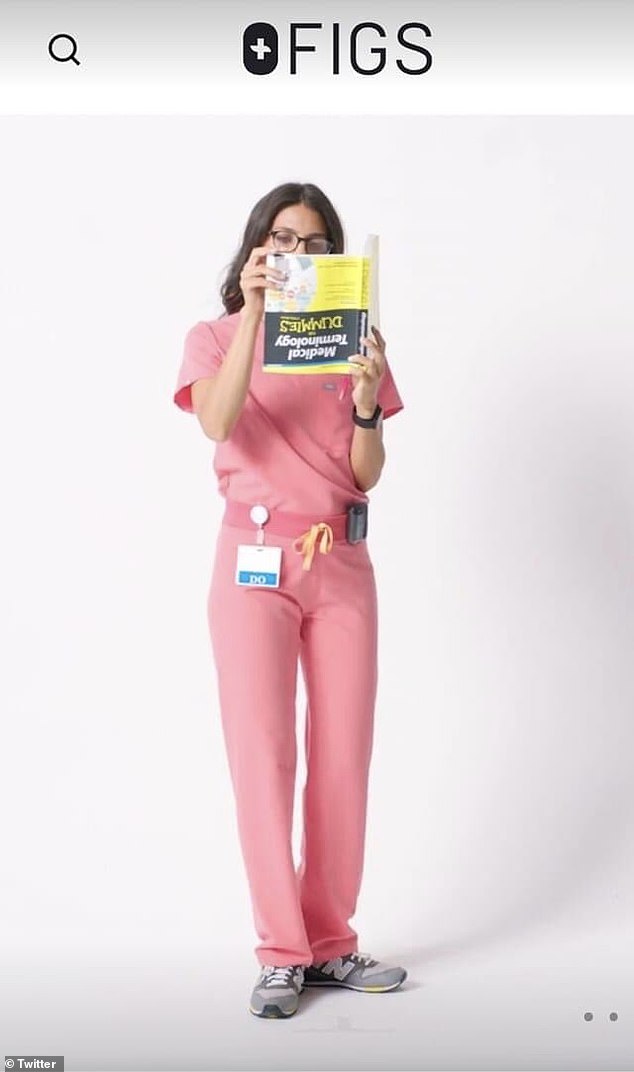 Thought through? Coctors are calling for a boycott of the scrubs brand FIGS for a ‘sexist’ video showing a female osteopathic physician reading a ‘For Dummies’ book upside-down 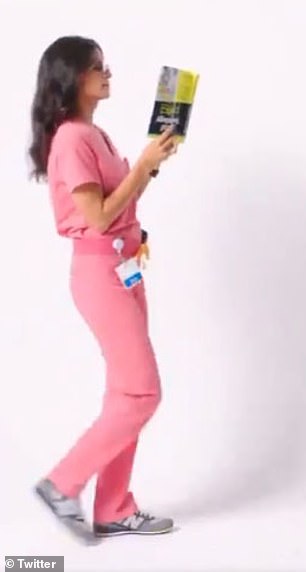 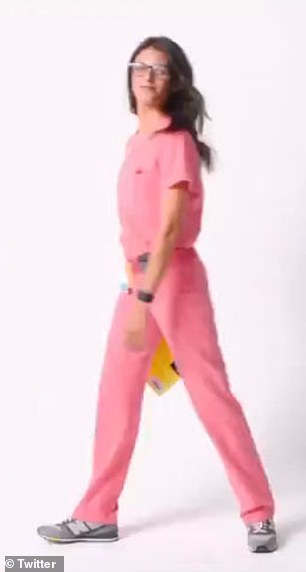 Marketing for Dummies? The video appeared on a product page but has since been removed following backlash

Twitter users soon took note of the questionable video and shared it, as well as screengrabs from it, on the social media app.

Hundreds of doctors and medical professionals were quick to slam the company, which was founded by Heather Hasson and Trina Spear in 2013, calling the video ‘blatantly sexist,’ ‘shameful,’ ‘insensitive,’ and ‘misogynistic.’

Among the doctors to chime in was Dr. Emily Porter from Texas, who is the sister of U.S. Representative for California’s 45th congressional district Katie Porter.

She wrote: ‘2020: Where a company like @wearfigs still thinks it’s cute to make an ad of a female physician (DO in this case) reading a “Medical Terminology for Dummies” book upside down & then expects her to turn around and pay $90 for a pair of scrubs. Guess what? We wised up. #boycottfigs.’

Pediatrics Resident Physician Chloe Douglas, MD, tweeted that she was ‘enraged as a female physician, but more importantly as an older sister to twin female DO students, who happen to be pressing that submit button for their residency applications this week.’ 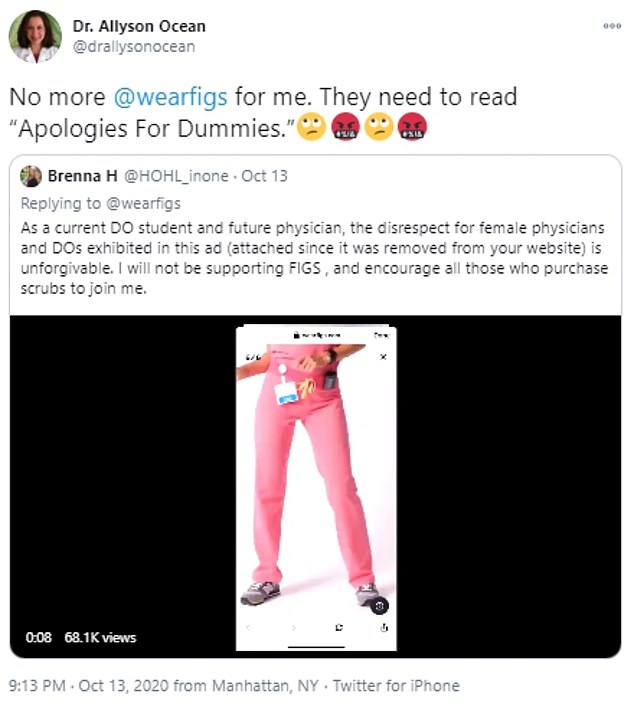 Rude: Doctors have slammed the video as ‘blatantly sexist,’ ‘shameful,’ ‘insensitive,’ and ‘misogynistic’

She called the video ‘offensive and disgraceful on too many levels.’

‘This is a huge NOPE from @wearfigs: perpetuating an “airhead” image of women and of DOs,’ tweeted Esther Choo, MD MPH. ‘Really? What were you thinking? There are too many brands for us to choose from for you to be doing this.’

Others described the video as ‘disparaging’ and ‘stupid,’ with many calling for boycott.

‘As women physicians in 2020, we still struggle to be taken seriously compared to our male counterparts, as we battle stereotypes like THIS EXACT ONE. We expect the brands we support to reflect the bada**es we are. @wearfigs – women physicians are disappointed in you. Do better,’ wrote emergency physician Jessica K. Willett, MD. 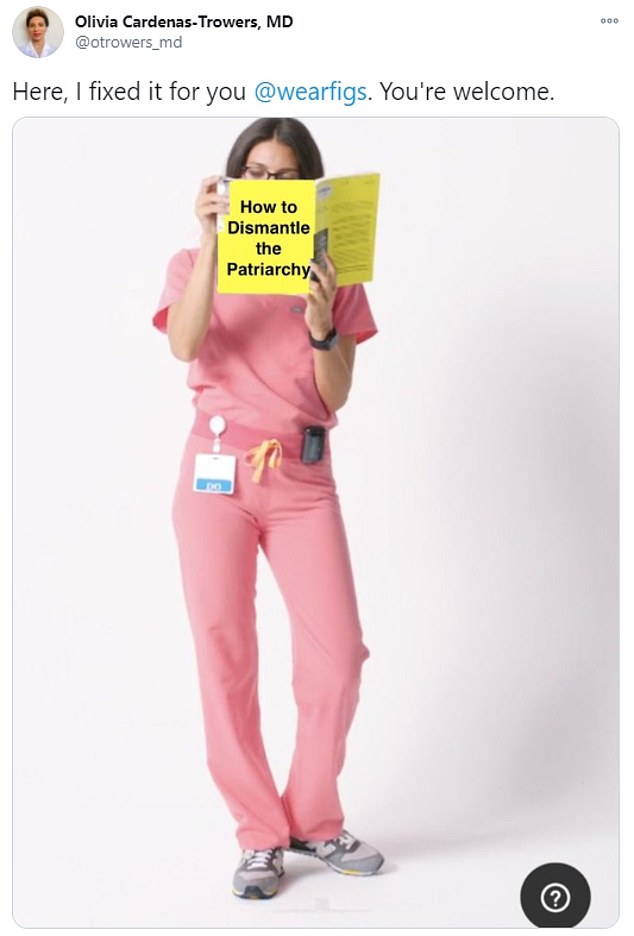 Directing dollars: Several have called for a boycott while slamming the brand, which was founded by Heather Hasson and Trina Spear in 2013

‘Women in medicine should be celebrated ‘Really? What were you thinking? — not mocked or degraded. This is what you decide to put in your ad @wearfigs?? I don’t see you making similar jokes about male physicians. Women docs work twice as hard to be taken seriously. Shame on you. No longer a customer. Sad,’ added breast surgeon Dr. Carolyn Parma.

‘I have always questioned the ethics of this company based on the way they take advantage of young docs, but now with this dedicated marketing campaign putting down women and DOs it’s become clear that you should shop elsewhere,’ he said.

Since the backlash swept Twitter, the company has removed the video from its website and issued a statement.

‘A lot of you guys have pointed out an insensitive video we had on our site — we are incredibly sorry for any hurt this has caused you, especially our female DOs (who are amazing!) FIGS is a female founded company whose only mission is to make you guys feel awesome,’ they wrote on Twitter.

‘We dropped the ball and and we are so sorry. We love you guys and we’ll always listen to what you have to say!’ 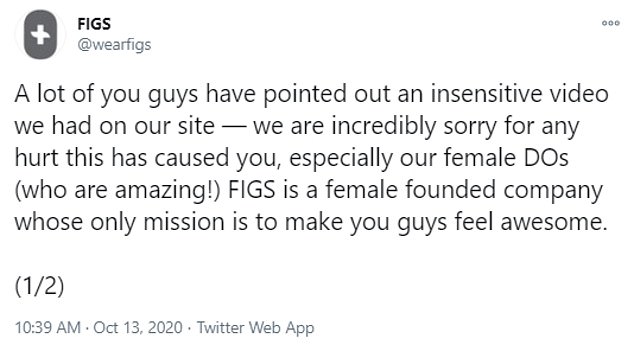 Whoops: FIGS has since apologized, telling customers they ‘dropped the ball’ 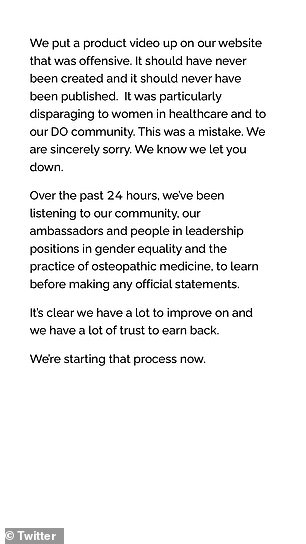 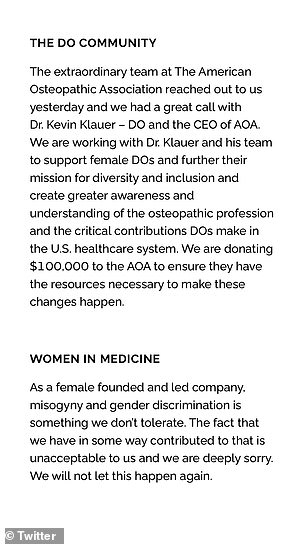 ‘It should have never been created and it should never have been published. It was particularly disparaging to women in healthcare and to our DO community,’ they said 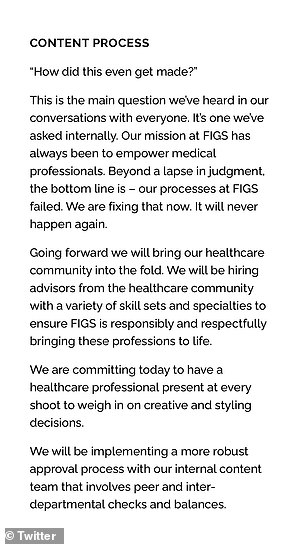 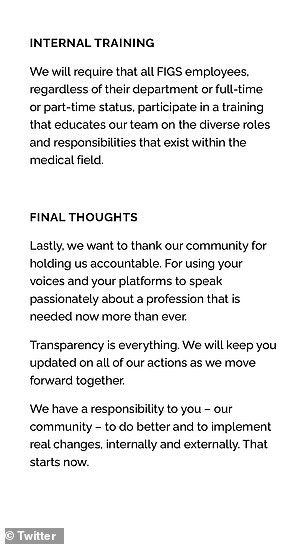 Next steps: Going forward, they said, they will be hiring advisors from the healthcare community ‘to ensure FIGS is responsibly and respectfully bringing these professions to life’

They went on to say that they are ‘making changes,’ calling the video ‘offensive.’

‘It should have never been created and it should never have been published. It was particularly disparaging to women in healthcare and to our DO community. This was a mistake. We are sincerely sorry. We know we let you down,’ they went on.

‘Our missing at FIGS has always been to empower medical professionals. Beyond a lapse in judgement, the bottom line is — our processes at FIGS failed. We are fixing that now. It will never happen again.’

Going forward, they said, they will be hiring advisors from the healthcare community ‘to ensure FIGS is responsibly and respectfully bringing these professions to life.’

They will also implement ‘a more robust approval process,’ require new training for staff, and donate $100,000 to the American Osteopathic Association.

‘As a female-founded and led company, misogyny and gender discrimination is something we don’t tolerate. The fact that we have in some way contributed to that is unacceptable to us and we are deeply sorry.’

thegirlsunhttps://thegirlsun.com
Previous articleRelatives of care home residents will be treated as key workers
Next articleDancing On Ice's Denise Van Outen and Matt Evers move in together

The Duke and Duchess of Cambridge have presented a Pride of Britain award, on behalf of the nation, to recognise the NHS frontline...
Read more
Feamil

A 23-year-old man has revealed the horror of learning that his fiancée's family has a creepy wedding night 'tradition' in which newlyweds are supposed...
Read more
Feamil

RapidBrow growth serum for eyebrows now has 43% off on Amazon

The Metropolitan Police have deployed extra officers to Hammersmith and Fulham and Hackney as the Government tries to control those boroughs with the highest...
Read more

A puppy that went viral after being hurled by a 'racist Karen' at a black man has now been adopted – and has...
Read more

It resumed production for the second series in August after the coronavirus pandemic halted filming.And some of the cast of The Witcher were...
Read more

Neymar hobbles off INJURED midway through first-half for PSG against Istanbul...
Read more

British teens are killed in parasailing accident in Rhodes: Brother and...
Read more

Florida authorities who have been searching for a missing mother who vanished while running errands have found her car with a body inside...
Read more
Life & Style

Prince Edward is the youngest son of the Queen and is no stranger to the publicity that comes with being a royal.Sophie, on...
Read more