Sasse tears into the president in recorded comments from an apparent conference call with his constituents, the Washington Examiner reported – accusing him of having ‘ignored’ the coronavirus as it spread through the nation. He also accuses Trump of having ‘treated the presidency like a business opportunity.’

He also predicts that Trump will lose the election.

‘I’m worried that if president Trump loses, as looks likely, he’s going to take the Senate down with him,’ Sasse frets on the recorded call.

Some of his most searing comments come on the coronavirus – where polls show Trump is struggling against rival Joe Biden, with daily infections above 50,000. 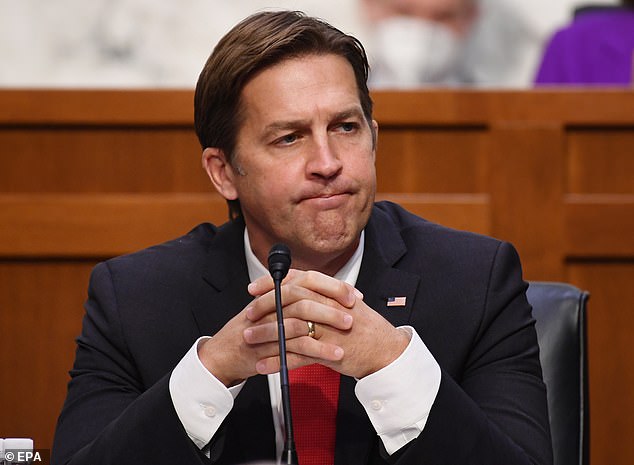 ‘But the reality is that he careened from curb to curb. First, he ignored COVID. And then he went into full economic shutdown mode,’ said Sasse, who is up for reelection but is expected to prevail.

‘He was the one who said 10 to 14 days of shutdown would fix this. And that was always wrong. I mean, and so I don’t think the way he’s lead through COVID has been reasonable or responsible, or right.’

Sasse slammed on Trump on foreign policy as well as domestic politics – even saying his party’s leader has ‘flirted’ with white supremacists.

‘The way he kisses dictators’ butts. I mean, the way he ignores the Uighurs, our literal concentration camps in Xinjiang. Right now, he hasn’t lifted a finger on behalf of the Hong-Kongers,’ Sasse said.

‘The United States now regularly sells out our allies under his leadership, the way he treats women, spends like a drunken sailor. The ways I criticize President Obama for that kind of spending; I’ve criticized President Trump for as well. He mocks evangelicals behind closed doors. His family has treated the presidency like a business opportunity. He’s flirted with white supremacists,’ he said.

The stunning comments came from a tele-town hall Sasse did with his constituents this week.

‘He mocks evangelicals behind closed doors. His family has treated the presidency like a business opportunity. He’s flirted with white supremacists,’ Sasse adds. Trump took fire for failing during the first presidential debate to denounce white supremacists. 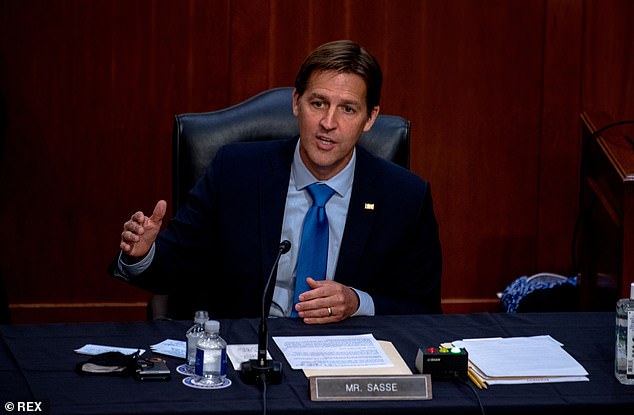 Sasse tossed softball questions to Amy Coney Barrett in her confirmation hearing, asking why the nation has a Bill of Rights and allowed her to name the ‘five freedoms’ from the First Amendment (she came up with four) 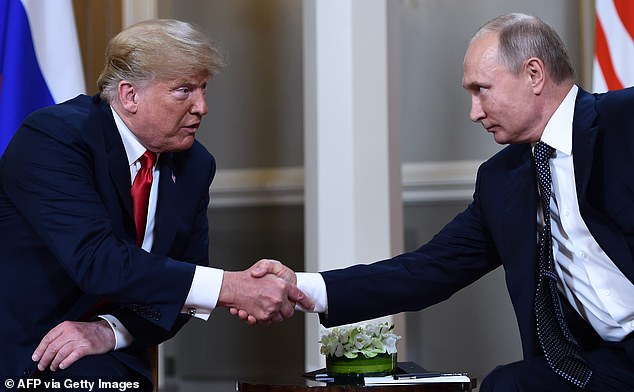 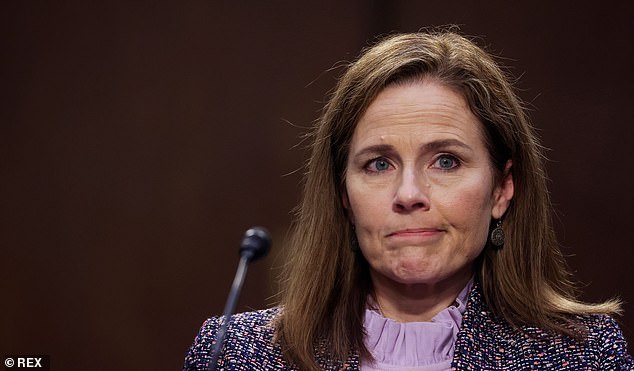 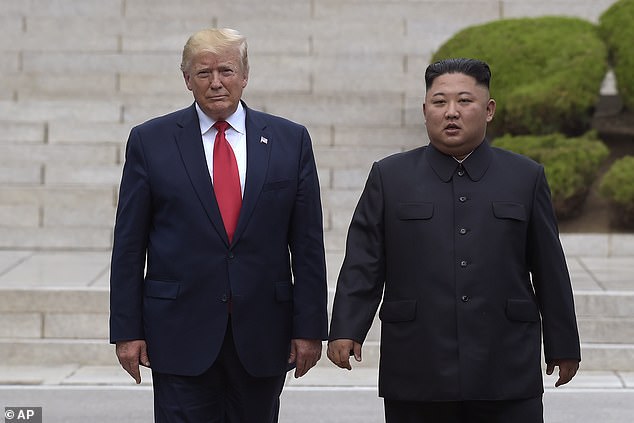 In this June 30, 2019, file photo, U.S. President Donald Trump, left, meets with North Korean leader Kim Jong Un at the North Korean side of the border at the village of Panmunjom in Demilitarized Zone. Kim on Saturday, Oct. 3, 2020 sent a message of sympathy to Trump and his wife Melania, wishing they would recover from the COVID-19 illness, state media reported 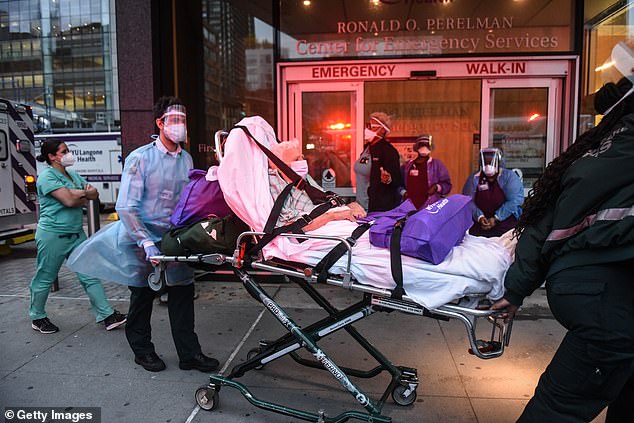 Sasse’s office didn’t deny the comments, telling the paper he believes in the importance of keeping the Senate, calling it ‘ten times more important’ than keeping the White House.

The remarks from Sasse put distance between him and Trump, even as he towed a party line in backing up Judge Amy Coney Barrett at Judiciary Committee hearings. He tossed softball questions, including one asking why the nation had a Bill of Rights, even as Democrats fumed at taking up the nomination so close to an election.

He also asked her to name the ‘five freedoms’ expressed in the First Amendment, although she only recalled freedom of press, speech, religion, and assembly. ‘Redress or protest,’ he told her when she asked for help remembering.

On the call, Sasse was responding to a constituent who asked him’ Why do you have to criticize [Trump] so much?’

He also hit Trump for ‘stupid political obsessions’ that could harm the party ‘if young people become permanent Democrats because they’ve just been repulsed by the obsessive nature of our politics, or if women who were willing to still vote with the Republican Party in 2016 decide that they need to turn away from this party permanently in the future.’

His comments emerged after even reliably conservative Republican incumbents like Sen. John Cornyn (R-Texas) have put distance between themselves and the president in public comments.

thegirlsunhttps://thegirlsun.com
Previous articleMARTIN SAMUEL: All Liverpool was not be Manchester United… but they failed
Next articleNational lockdowns should only be a last resort says WHO boss

Wedding for rabbi's grandson where 10,000 people were expected is scaled down to 'virtual event'

The daughter of a hiker who has been rescued in Zion National Park after spending 12 days alone with no food and limited...
Read more
U.S

A second person in three months has come forward to accuse the top advisor to the mayor of Los Angeles, Eric Garcetti, of...
Read more
U.S

Journalist Glenn Greenwald, the founder of The Intercept, has lambasted his fellow reporters and the media for 'cone of silence' regarding a report...
Read more

A beautician has revealed how a £5,000 eyebrow transplant has transformed her confidence after she damaged her hair through years of overplucking.The unnamed...
Read more

The UK is set to become the first country in the world to deliberately infect healthy volunteers with the coronavirus, the Government confirmed...
Read more

“Around 26,700 vehicles are affected worldwide including 2,930 in the UK, some of which are already with customers with the remainder awaiting delivery.“BMW...
Read more

Sweden is looking to ease restrictions for older people despite a rise in coronavirus cases, the architect of the country's no-lockdown strategy said...
Read more

After being called in for interrogation during Tuesday's episode of SAS Australia, Arabella Del Busso broke down as she spoke about faking her pregnancy,...
Read more

Expensive shopping trip! £150,000 McLaren supercar is written off after crash with Audi Q5