Now we help China grow vegetables on the Moon!


Their mission: to boldly grow where no man has grown before.

A team of British scientists has been signed up to join an ambitious Chinese project to produce food on the Moon.

Their aim is to send greenhouses to the lunar surface in the hope of growing wheat, sweet potatoes, carrots, onion, basil and garlic that could ultimately feed astronauts based there. 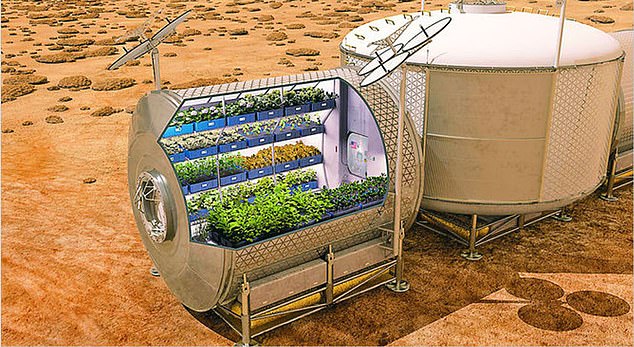 The first are expected to be sent into space as part of China’s robotic Chang’e 6 lunar mission scheduled for 2023 or 2024, named after the Chinese goddess of the Moon. The research could prove invaluable for future manned missions to Mars.

However, China’s ambitions in space have caused alarm in the West, especially among the military, with the US government banning Nasa from collaborating with scientists from the regime it considers a technological and territorial rival.

The UK team is headed by Professor Javier Martin-Torres at the University of Aberdeen, who was an adviser on the 2015 sci-fi film The Martian.

The movie told of an astronaut, played by Matt Damon, who becomes stranded on the Red Planet and has to grow potatoes to ensure his survival.

‘If you go to the Moon or Mars, you have to look at a greenhouse where you can grow plants which you can use to feed the astronauts there,’ said Prof Martin-Torres.

‘In these places, there is no oxygen and you have a lot of ultraviolet radiation that will kill the plants so you have to have an environment that is controlled.

‘The problem with the Moon and Mars is how expensive it is to produce resources there. At some point, we want to colonise the Moon and Mars – in the sense of having a base for astronauts there – so will need to know how to produce in-situ resources. This is why producing oxygen, water, fuel is very important.’

The tiny £100,000 greenhouse his team is developing is called Gaspar, which is short for Gaseous Atmospheres in Space: Production, Adaptation and Resources.

Each is about the size of a shoebox and made from titanium. They need to withstand massive changes in temperatures, from 260F (130C) in the lunar day to -280F (-170C) at night. The Moon’s lack of atmosphere would also expose the plants to deadly solar radiation. 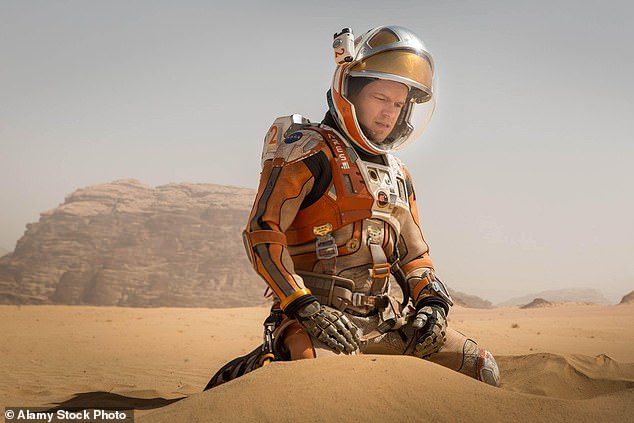 The UK team is headed by Professor Javier Martin-Torres at the University of Aberdeen, who was an adviser on the 2015 sci-fi film The Martian, pictured

Gaspar will provide a hermetically sealed, controlled environment to provide optimum levels of water, oxygen and light, which will come from LEDs within the unit. The project will be monitored by scientists on Earth.

‘All the materials are space-qualified,’ Prof Martin-Torres said. ‘They have to withstand vibrations and high pressure at launch, high temperatures and very cold temperatures on the Moon and radiation.

‘Seeds are generally strong against radiation and extreme temperatures. Moreover, they have been proved by China to survive the travel to the Moon. Some micro-organisms, called extremophiles, can survive in very harsh conditions, such as very low and high temperatures, and they will be helpful creating a nice ecosystem for growing plants.

‘In principle, the best plants to grow in a greenhouse in space are sweet potatoes, carrots, onions, kale, dandelions, basil, garlic and hops. There have been studies showing that they can grow very easily in Martian soil simulant, tasting no different than their terrestrial counterparts.’

China signed an agreement with Russia in 2017 to co-operate on lunar exploration and last year became the first nation to land an unmanned station on the far side of the Moon.

Beijing has also announced plans to build a scientific research station on the lunar south pole within ‘about ten years’.

In response, one US politician claimed: ‘They very much have military thoughts in mind.’

thegirlsunhttps://thegirlsun.com
Previous articleMan speeding through Ohio neighborhood gets out of his car to shoot at kids playing basketball
Next articleHailey Bieber puts on a sultry display ahead of husband Justin Bieber's SNL performance

One of Britain's top restaurants is ordered to tear down wooden...
Read more

Forget tea and coffee! Women are now turning their spaces into...
Read more

The top health official in Illinois broke down in tears as she announced the state's latest coronavirus numbers and pleaded with residents to...
Read more

Lady Anne Glenconner has revealed how a young Prince Charles caused mischief on the Queen's Coronation Day by nearly dropping her crown.  The former...
Read more

REVEALED: The BEST potato scallop in Australia for 2020 - and...
Read more
Sport