'Nobody knows what goes on behind closed doors': Michelle Keegan 'frustrated' by baby questions

Michelle Keegan has revealed her 'frustration' at people constantly questioning why she and husband Mark Wright don't have children, insisting 'nob

Michelle Keegan has revealed her ‘frustration’ at people constantly questioning why she and husband Mark Wright don’t have children, insisting ‘nobody knows what goes on behind closed doors’.

The actress, 33, who has been married to the TOWIE star turned TV presenter, 33, for five years, hit out at sexist double standards, admitting queries about when she is going to have a baby do ‘bother’ her now.

In an interview with the August issue of Cosmopolitan magazine, she said: ‘A few years ago it didn’t bother me and I answered the question, but now I think, “I don’t need to answer that because nobody knows what goes on behind closed doors”. 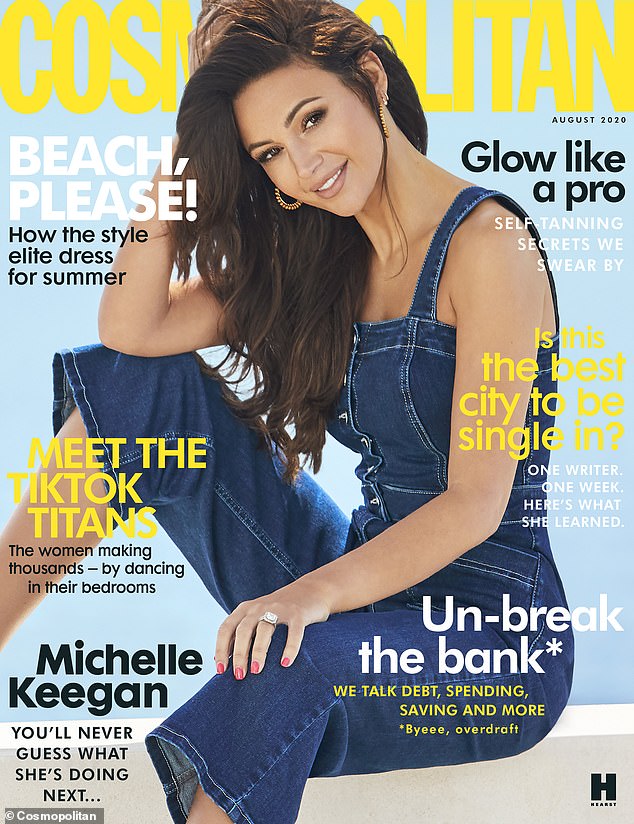 ‘Nobody knows what goes on behind closed doors’: Michelle Keegan has revealed her ‘frustration’ at people constantly asking when she’s going to have a baby

‘I remember when I finished Our Girl people were like, “Is it because you’re going off to have a baby?”

‘I know for a fact if Mark finished a job, nobody would ask him if he was going to have a baby. It’s not fair. It does make me feel frustrated.’

The former soap star also admitted she regrets posing for ‘lads’ mags’ during her six-year stint playing Tina McIntyre in Coronation Street between 2008 and 2014.

Although Michelle praised the ‘fabulous’ Corrie team for looking after her, she hinted she was pushed into posing in her underwear and explained ‘it wasn’t something I necessarily really wanted to do’.

She said: ‘It wasn’t something that I necessarily really wanted to do. I remember feeling very shy because I was really young. But I thought it came as part of being on TV. 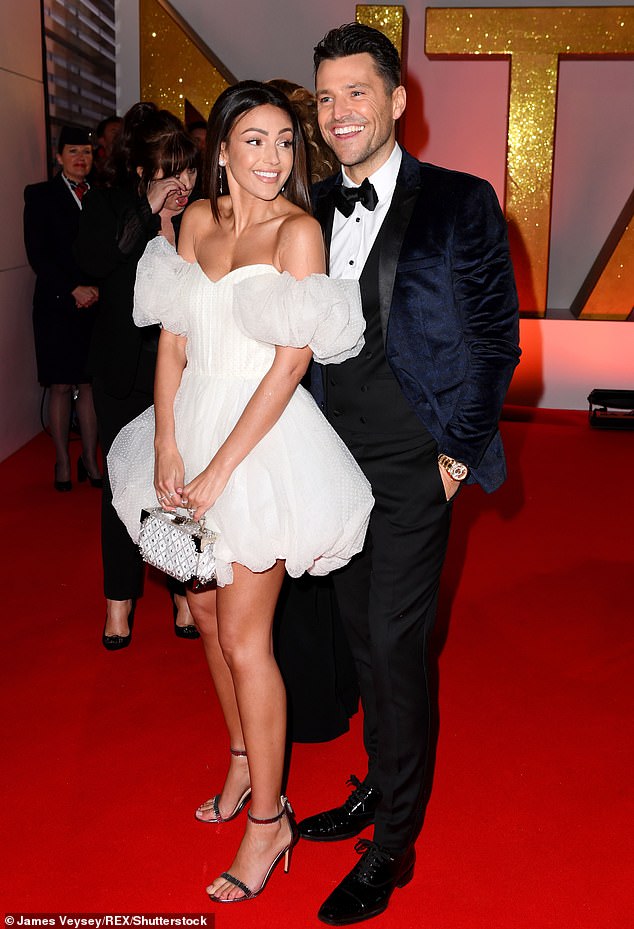 ‘It’s not fair’: The actress, 33, who has been married to Mark Wright, 33, for five years, admitted queries about when she is going to have a baby do ‘bother’ her now (pictured in 2019)

‘Now that I’m older, I realise that it is OK to say no to something that you don’t feel 100 per cent happy with. You don’t have to do it because you think you have to do it.

‘But I will say, this is no reflection on Coronation Street. I had a brilliant network and team and the PR team were fabulous and really looked after me and it was a different time back then. Everyone did it at that time.’

Michelle added: ‘It’s OK to say no and go with your instinct. I always wanted to please people but I think if something doesn’t feel right, just say no.

‘I go with my instinct a lot now. I am still that ‘yes’ person as I don’t like upsetting anyone. But I feel like I am getting stronger. That comes with age.’

Michelle took on the role of Tina when she was just 21 and said her meteoric rise to fame on one of the nation’s most popular soaps was a ‘daunting’ experience. 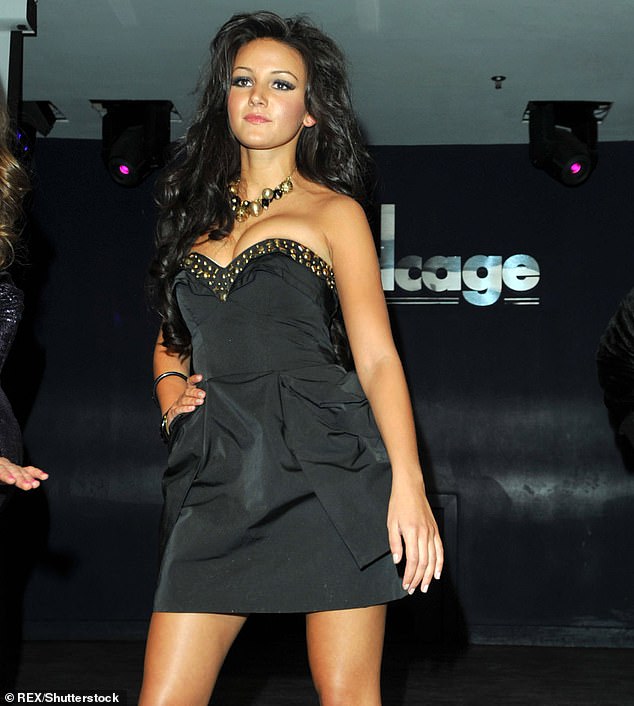 ‘I was really young’: The former soap star also admitted she regrets posing for ‘lads’ mags’ during her six-year stint playing Tina McIntyre in Coronation Street (pictured in 2009)

The Brassic star told how she used to let ‘negative comments’ get to her, but has since found an ‘inner confidence’.

Speaking to Cosmopolitan, she explained: ‘It was really daunting. It happens very quickly on a soap because you’re in people’s living rooms five times a week, so people start believing they know you.

‘It was scary, I was still a young girl and I was growing up in the public eye. Everyone had their own opinions – how you act, how your hair looks, what you’re wearing, how you physically look.

Michelle and husband Mark have been together since late 2012 when they met on holiday in Dubai. 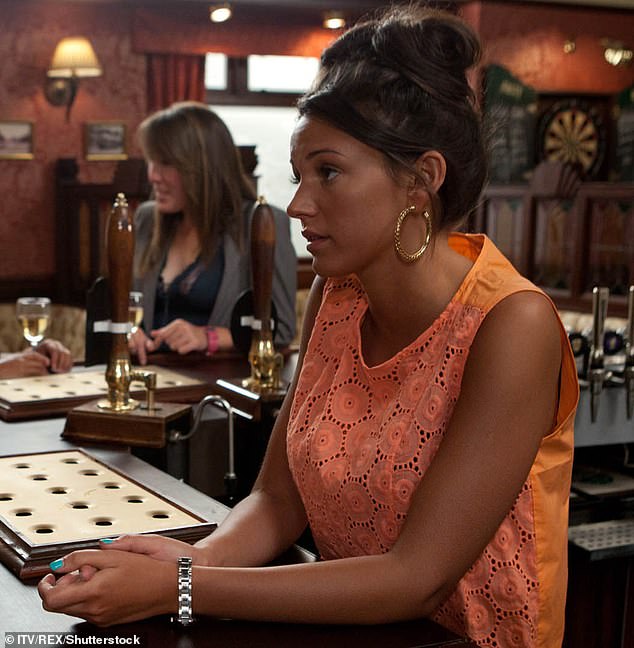 ‘It was scary’: Michelle took on the role of Tina when she was just 21 and said her meteoric rise to fame on one of the nation’s most popular soaps was ‘daunting’ (pictured in 2013)

The former TOWIE star popped the question nine months later and the pair married in a lavish ceremony at Hengrave Hall in Suffolk in May 2015.

The couple previously had to conduct a long distance relationship while Michelle worked in South Africa for extended periods for BBC drama Our Girl, while Mark had filming commitments on EXTRA in Los Angeles.

During their time away, the pair were constantly plagued by claims of martial strife, something which Michelle has now blasted as ‘ridiculous’.

She explained: ‘If you go away for work it’s seen as a negative and not a positive. I just don’t understand that and find it hard.

‘You’re trying to carve yourself a career and people say you shouldn’t be doing it because it impacts your marriage. It’s ridiculous.’ 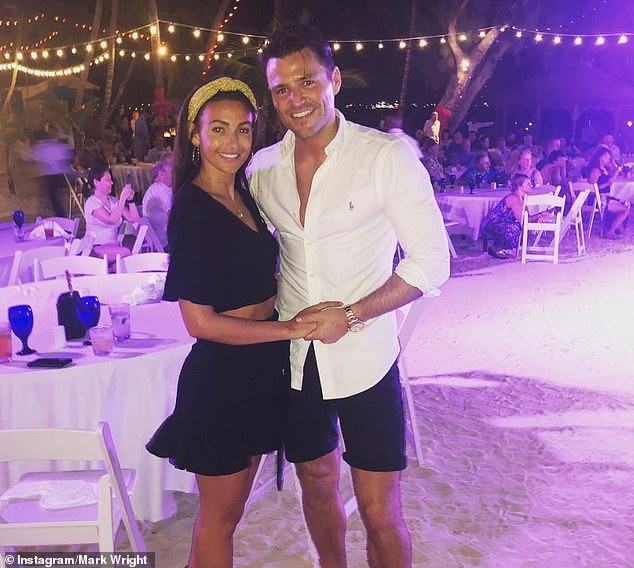 Happy couple: Michelle and husband Mark have been together since late 2012 when they met on holiday in Dubai, and have been married for five years

Michelle told how she and Mark actively decided to limit what they shared about their marriage on social media a couple of years ago when she felt like she had ‘lost control’ of the narrative about her relationship.

She said: ‘What I’ve had to do since I got married is pull back and keep my private life for me, and I feel a lot happier and [more] settled since I made that choice.

‘At the beginning people didn’t understand it and were like, “You talked about it all the time four years ago”. But I feel like I have to hold things back for me because I need to regain control. A few years ago I felt like I’d lost that control.’

Both Michelle and Mark have ‘enjoyed’ the lockdown period because it has given the couple the opportunity to spend quality time together, walking their dogs, doing jigsaws and cycling near their Essex home.

The experience has also given the actress the opportunity to start writing her own material, and she has already had interest from production companies about potentially developing her projects.

Michelle said: ‘We [Mark and I] were saying we’d enjoyed it. It’s been nice because we’ve both been working from home. Normally we could be out all day or I have to go to Manchester [to film Brassic] or Mark is in London.

‘I’m taking my dogs for daily walks, I’ve been doing a jigsaw a week and I’ve taken up cycling on a proper road bike. We go out three times a week and do 11 miles!

‘I’m writing two things. I’ve never had the time to sit down, write and research and I’m really enjoying the process. It’s a comedy drama and a mini-series drama.

‘I had the idea for one of them a few years ago and this time has helped me get my ideas down on paper. I’ve had meetings with production companies on Zoom. Hopefully it’s something we can get off the ground. It’s exciting.’

Read the full interview with Michelle Keegan in the August issue of Cosmopolitan, on sale July 2. 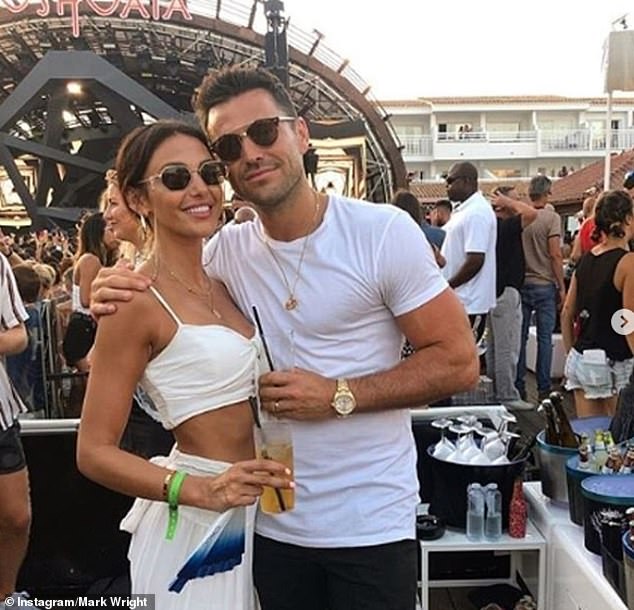 Dementia: Has your loved one made this mistake in conversation recently? Warning sign 0