The Girl Sun
Home Health NHS hospitals in England are cancelling operations to make way for a...
Health


Hospitals across England are cancelling routine operations to make way for a surge in coronavirus patients.

Liverpool University Hospitals NHS Foundation Trust chief executive Steve Warburton told staff in a memo that it had reached a ‘critical point’ and would be scaling back planned procedures.

And public health officials in Leeds said hospitals in the city were now ‘very close’ to having to cut back on non-Covid services.

The huge demand in services was forcing clinicians to consider ‘how to save the most lives, directly or indirectly from Covid’ one said.

It comes days after the Royal College of Surgeons of England warned there could be a ‘tsunami’ of cancelled operations this winter as the NHS struggles to cope with a second wave of coronavirus.

The cancellations will add to the growing backlog – with more than 4.2million people on the waiting list and 110,000 of these having waited for over a year. 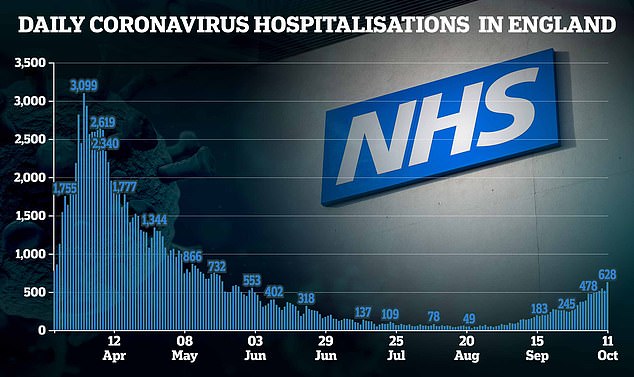 Numbers of people being admitted to hospital with coronavirus each day have been surging in recent weeks, piling pressure on NHS hospitals, particularly in the North 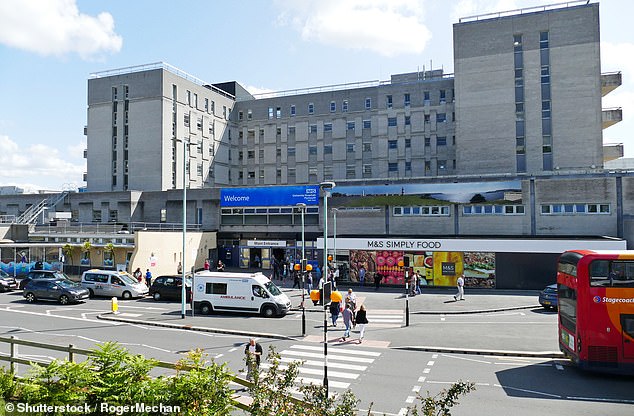 He said: ‘We have to ensure patients who have suspected or confirmed Covid are safely cared for away from those patients without Covid.

‘This involves reconfiguring our wards to ensure everyone remains safe.’

Victoria Eaton, Leeds’s director of public health, said hospitals wanted to clear their backlog of work and deal with delayed treatments and procedures.

‘The challenge of this time is that other NHS services are not being stood down in the way that they were in the spring,’ she said.

‘We’ve got a huge backlog now of people who desperately need surgery and treatment for their conditions, which colleagues in the NHS are absolutely committed to continue with, and therefore it gives them very little wriggle room within the hospital to accommodate all of those cases plus the new Covid ones that are now coming in.’

She said medics were working to look ‘in the round of how we save the most lives, directly or indirectly, from Covid’.

Meanwhile, staffing fears have been raised over the three Nightingale hospitals that have been put on standby in virus hotspots.

Local health leaders warned it will be difficult to find enough people to staff the critical care hospitals in Manchester, Sunderland and Harrogate following the announcement they were being ‘mobilised.’

Ms Eaton said: ‘The buildings are there, the issue is how we get the staffing into the Nightingales because, in spring, the workforce plan was for people who were stood down from other services to go to staff the Nightingales.

‘So I think there is a real challenge around how to get enough NHS staff to make those sites work. It’s incredibly challenging this time round.’

NHS England’s medical director recently warned hospitals in the North West and North East could end up treating more patients than they did during the peak of the first wave of Covid-19.

Professor Stephen Powis said the NHS remained open for all patients but keeping coronavirus infections under control is the key to other patients getting the treatment they need.

Hospitals in Liverpool have began the process of scaling back non-urgent treatments because of a spike in Covid-19 patients, it was revealed yesterday.

Staff working at Liverpool University Hospitals Foundation Trust have been told that pressures have reached a ‘critical point’, with up to 15 per cent of all beds currently occupied by coronavirus patients.

A leaked memo sent by bosses claims that the trust, which runs four hospitals, has now taken the decision to start reducing its ‘elective’ programme, admitting it will be a ‘distressing’ time for patients whose treatment is postponed.

The move echoes what happened in the spring when NHS hospitals were forced to turf out inpatients and postpone thousands of operations and appointments so they could make way for the wave of Covid patients the nation expected.

The Health Service Journal claims to have seen a memo sent to staff at Liverpool University Hospitals Foundation Trust, which says bosses are taking a ‘phased approach to reducing our elective programme’.

The letter, penned by the trust’s chief executive Steve Warburton, read: ‘We will continue to prioritise surgery based on clinical need with a view to maintaining urgent and cancer surgery where possible.

‘We will continue to maintain access to outpatient appointments wherever possible and maintain diagnostic activity.

‘We recognise that this will be distressing for patients whose elective care needs to be rescheduled, however we must always ensure that the care we provide is safe.

‘We understand that this is a very challenging time for staff and we will be sharing more information about the enhanced support we have in place for you in the coming days.’

The moves starting to be made in the NHS now echo what happened in the spring when hospitals were forced to turf out inpatients and postpone thousands of operations and appointments so they could make way for the wave of Covid patients the nation expected.

Millions of people are feared to have missed out on cancer scans, consultations or treatments while hospitals ran reduced service, while A&E attendances plummeted to fewer than half the usual numbers.

This time around health chiefs in Liverpool hope patients will still be treated at ‘alternative locations’ and that both cancer and urgent surgeries will be prioritised ‘where possible’.

Sounding a grim warning about the threat of Covid-19, England’s deputy chief medical officer Professor Jonathan Van-Tam and NHS medical director Professor Stephen Powis yesterday revealed the number of Covid-19 patients in hospital is now higher than before the blanket lockdown was imposed in March.

In a televised Downing Street briefing laying bare the data that Boris Johnson will use to plunge millions of people into ever deeper lockdowns, the pair warned that levels could even top the spring’s peak within four weeks.

It came as another NHS trust in the North told thousands of patients waiting for routine operations they may need to wait up to two years to be seen. One top expert called the move ‘outrageous’, saying: ‘We need to get back to normal urgently.’

Hull University Teaching Hospitals NHS Trust has written to patients informing them that it is aiming to see them as quickly as possible within the next 24 months, leaving angry patients fearing they may be dead by the time they get an appointment.

The Health Service Journal claims to have seen a memo sent to staff at Liverpool University Hospitals Foundation Trust, which says bosses are taking a ‘phased approach to reducing our elective programme’.

And data presented by Professor Van-Tam and Professor Powis in the Downing St briefing today showed almost 250 of the hospital’s near-1,300 beds are currently taken up by Covid-19 patients.

NHS England statistics show this rate has more than doubled since the start of the month, when 95 coronavirus-infected patients were receiving care across the trust’s four hospitals.

‘It is clear that hospital admissions are rising fastest in those areas of the country where infection rates are highest, particularly the North West,’ Professor Powis told the No10 briefing yesterday.

And Professor Van-Tam warned the situation will get worse before it gets better.

At a Downing Street press conference yesterday, the Prime Minister Boris Johnson said there are more Covid-19 patients in UK hospitals now than on March 23 when the country went into lockdown, and deaths are rising, too.

In the last two weeks alone, the number of people in hospital with coronavirus has shot up by 40 per cent.

A total of 633 people were admitted to hospital on October 9, the most recent day data is available for on the Government coronavirus dashboard.

The seven day average for new hospital admissions is 505 – up 53 per cent in one week. On Saturday October 3 it was 330. 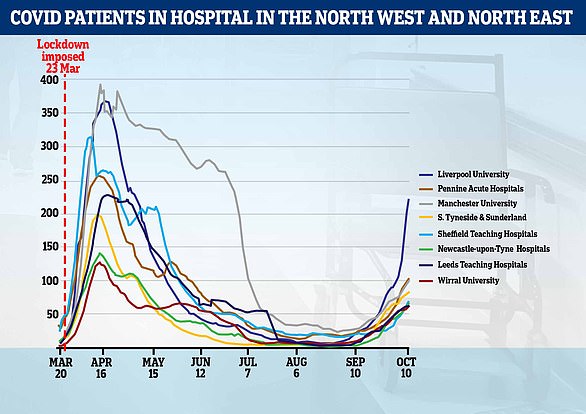 The rate of increase in March was immense, however – the number of patients tripled in just one week to 10,767 on March 30.

At the current rate of rise, according to Government figures, it took three weeks for the number of patients in hospital to treble, from 1,141 on September 20.

Daily admissions are significantly lower now than they were then, but are rising as case numbers continue to go up around the UK.

The higher numbers of people being diagnosed in the past week will later lead to even more going into hospital in the coming weeks, the deputy chief medical officer Professor Jonathan Van-Tam warned yesterday.

Data presented at the briefing by Professor Van-Tam showed that hospitals in Liverpool now have the highest levels of coronavirus admissions in the country.

Some like it hot! Over-confident labourer if left gasping after downing...
Read more

Just 62 days after Sevilla triumphed over Inter Milan in Lisbon, the Europa League returns to our screens once again on Thursday nights...
Read more

An 18-year-old man has died in hospital after a horror car crash which killed three people left him fighting for his life.Nathan Cartwright,...
Read more
News

Barrie Drewitt-Barlow, 50, says he now wants twins after having a baby via surrogate with fiancé, 25

Liverpool's Joe Gomez and Fabinho step up against Ajax

Liverpool's Joe Gomez put in a display to remind people of...
Read more