Manchester woman was too scared to date before nose job


A young woman claims a £5,500 nose job has made her feel like ‘a million dollars,’ after cruel comments comparing her to triangle faced Disney character Phineas Flynn and a shark plagued her childhood.

Falling foul of hurtful name-calling throughout secondary school, recruitment officer Madison Cain, 20, from Failsworth, Greater Manchester, first asked her parents, Julie and David, both 53, if she could have a new nose when she was just 16.

Concerned, they asked her to wait for a while but, aged 18, seeing her continued distress, they agreed to fund the operation – which she had in September 2019 and says changed her life. 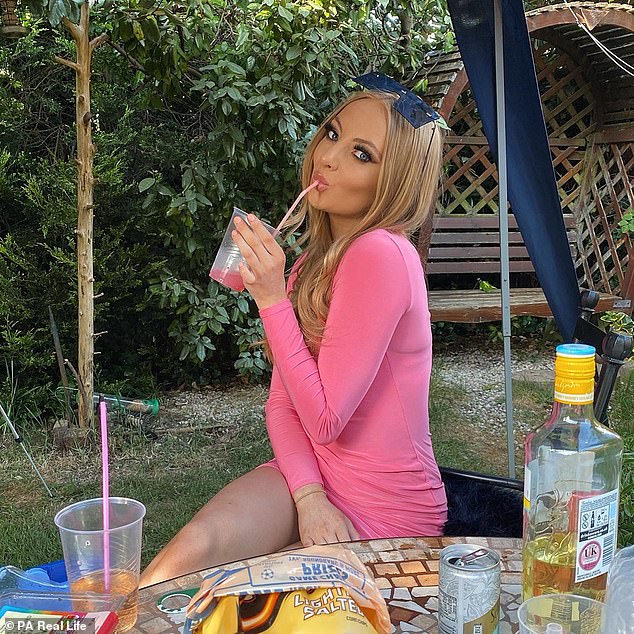 Madison Cain, 20, from Failsworth, Greater Manchester said her life has been transformed after a £5,500 nose job gave her confidence 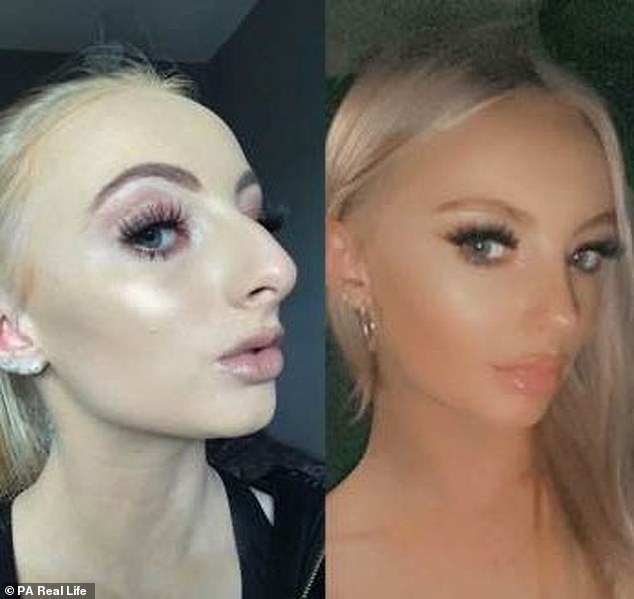 Madison, pictured before and after surgery, was desperate to have a nose job when she was 16, and at 18 her parents finally agreed to fund the operation

Madison said: ‘At secondary school, other children would point and laugh saying that I looked like Phineas Flynn, from the Disney animation Phineas and Ferb, whose whole head is one big triangle.

‘You know what kids are like, they can be so cruel. Soon the nickname caught on and I was being called it non-stop.

‘If it wasn’t that, people would whisper and shout, “Big nose” at me. It was so upsetting.

‘But now, after the operation, I feel like a completely different person. It’s the best thing I’ve ever done.’ 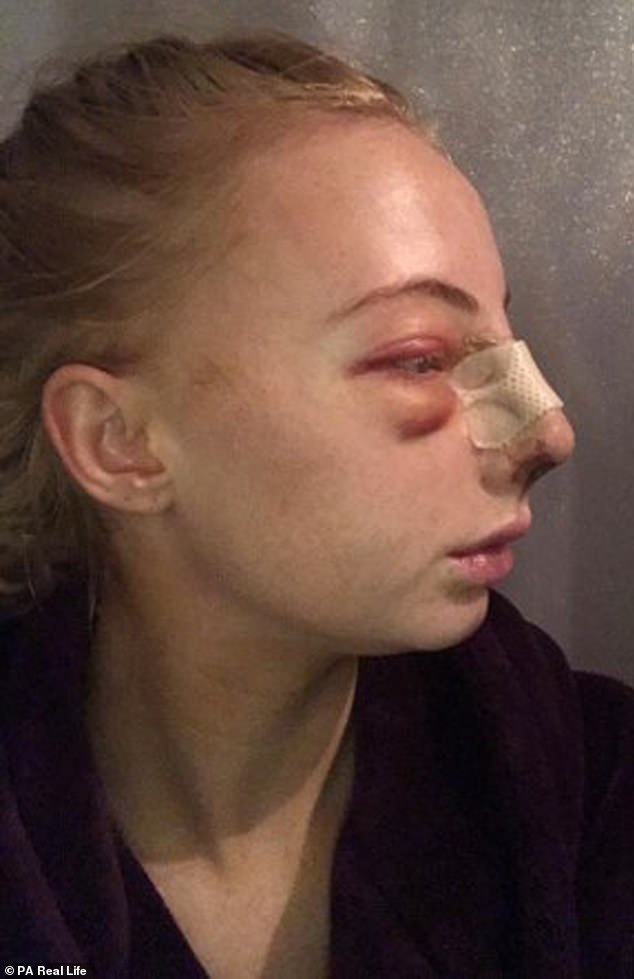 The recruitment officer, pictured recovering from surgery, was nervous about meeting new people because she was worried how they would react to her nose 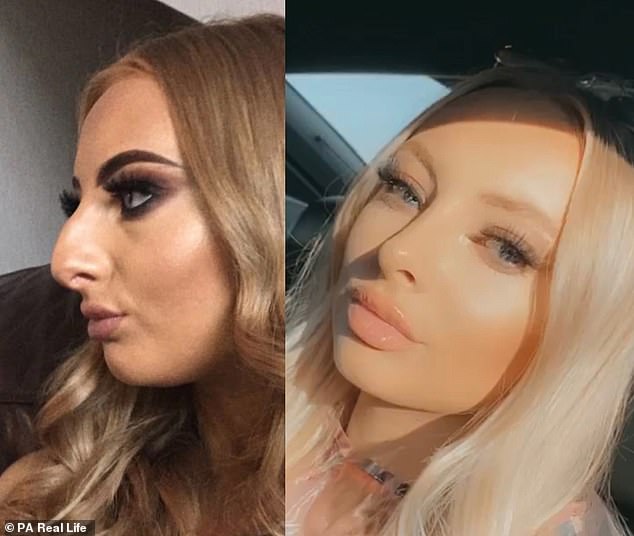 A before and after photo of Madison’s nose. Once she left secondary school, the bullying stopped, but she still felt self-conscious after years of taunting 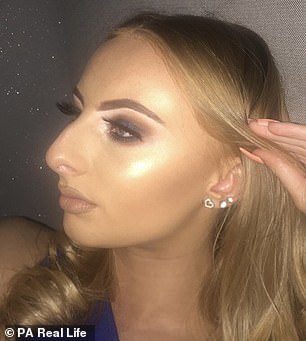 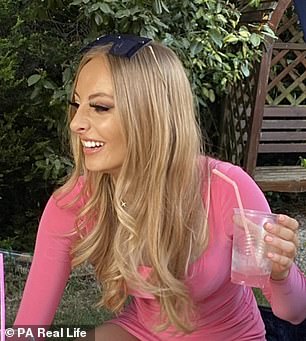 Throughout her teens, Madison said the cruel comments about her nose ‘never stopped’. But after having surgery (right) she believes that she looks like a ‘totally different person’

Madison only developed a complex about her nose after leaving primary school.

Recalling a particularly cruel comment, when she was 13, she said: ‘One day, a boy said in front of everyone, ‘When you do backstroke at the pool does everybody run out screaming shark, because of your nose?’

‘It was like that throughout my teens. The cruel comments never stopped.’

Suffering with low moods and social withdrawal because of the jibes, Madison’s self-confidence hit rock bottom. 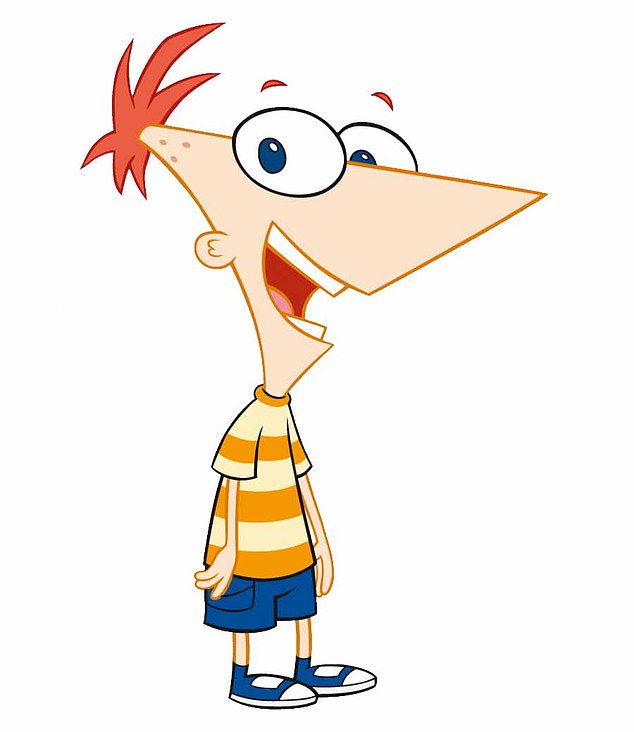 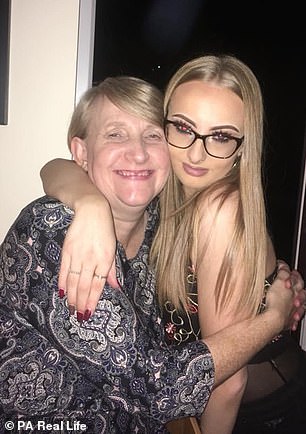 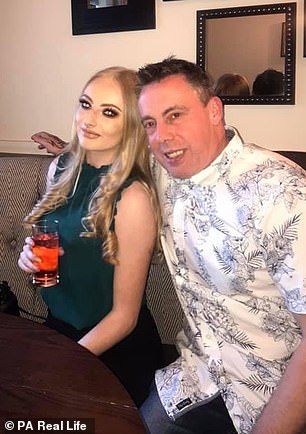 Madison, pictured left with her mother Julie, wanted to have surgery at 16, but was urged by her parents to wait until she was older. When she was 18, her mother and dad, David (pictured together right) agreed to fund the operation 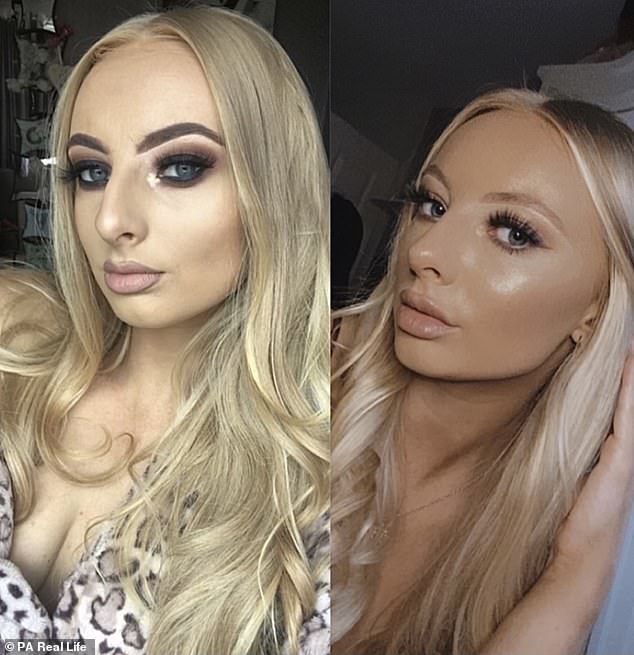 Madison, pictured before and after surgery, said being bullied at school over her looks had a ‘massive’ impact on her mental health 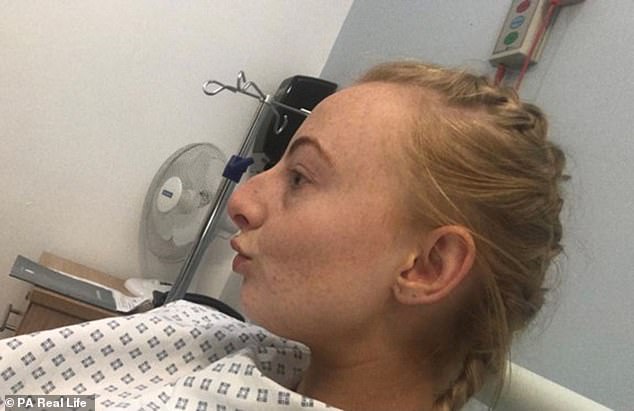 Madison in hospital for her surgery, which cost £5,500 and was funded by her parents who could see how unhappy she was

She said: ‘It had a massive impact on my mental health.

‘I was constantly worried about the size of my nose and the fact that it was bigger than everyone else’s.

‘I had a great bunch of friends from primary school, who were a proper support network for me.

‘But I was terrified of meeting new people, as I worried that they’d laugh at my nose.’

And when her friends started going out on dates, she was far too self-conscious to talk to boys.

‘It was awful,’ she explained. ‘Everyone always talks about how their school years are the best of their life, but for me they were some of the worst. 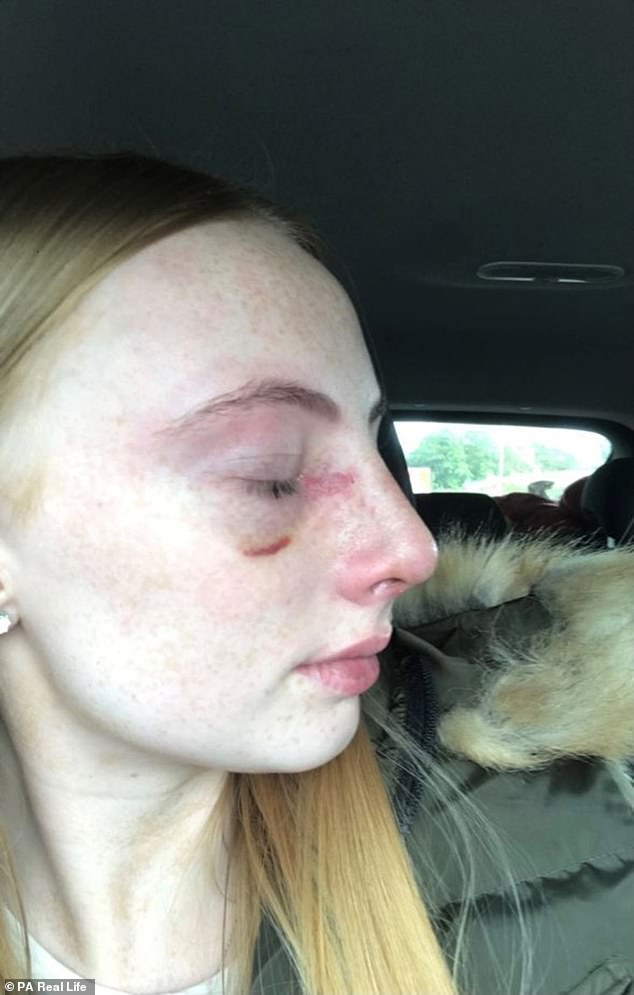 They day Madison had her new nose unveiled. She admits she broke down in tears when she saw the results

‘I didn’t go on a date with anyone because of my nose.

‘Everyone I hung around with knew me by the cruel nicknames I’d been given and the thought of dating was far too intimidating.’

Luckily, when she began studying for a diploma in travel and tourism at a local college in 2017, her peers were more grown up and the taunts stopped.

But the damage was done and, until she changed her nose, she felt sure she would never find true happiness.

And, despite asking her to wait when she asked if she could have surgery at 16, when Madison reached 18 in September 2018, her BT engineer dad and NHS budget manager mum agreed to pay for her nose job.

So, in April 2019, she had an assessment at cosmetic surgery clinic Transform Hospital Group Pines Hospital in Wythenshawe, Greater Manchester. 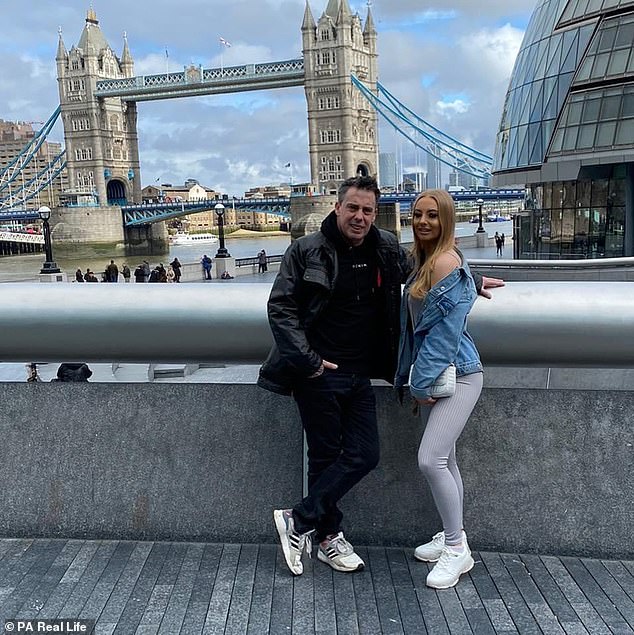 Madison, pictured on a day out in London with her dad David. He was the one to take her to hospital to have her bandages removed, and she admits that she instantly felt like a  ‘totally different person’

‘The main thing I remember from the appointment is my sense of relief at someone honestly understanding why I wanted to change my nose,’ she said.

‘For years people had brushed it off as something that wasn’t that bad, but finally someone was seeing it from my point of view.

‘I told them I wasn’t happy with the size of my bridge and they said they could fix it. That’s about all I can remember, as I was so excited.’

With the end of her studies in sight, Madison had two week-long holidays booked over the summer to celebrate with friends – in Kavos, Greece, and Magaluf, Mallorca – so booked in to have the procedure when she returned in September.

‘I could have done it before going away, but it was going to be a boozy summer and I didn’t want to damage my new nose!’ she laughed. 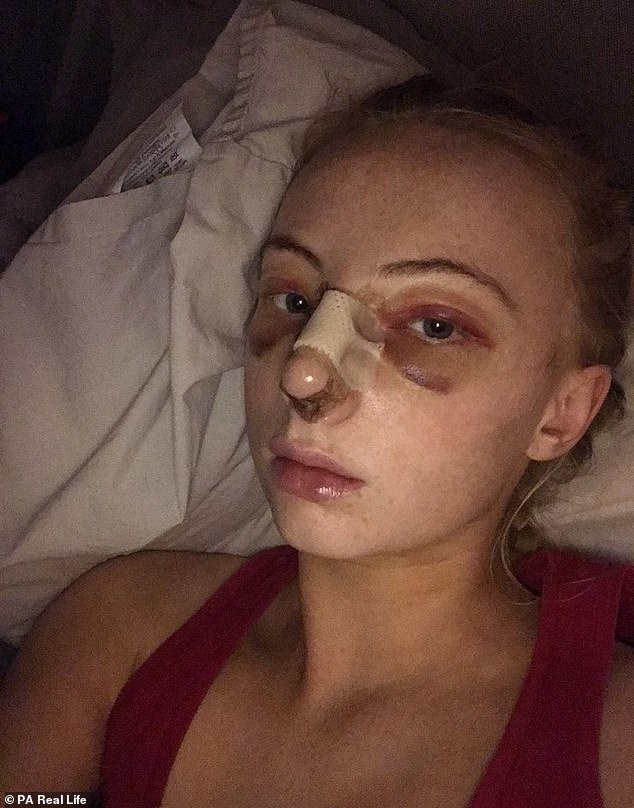 Madison couldn’t sleep the first night after her surgery because she wasn’t used to the splint, but  said she coudl already tell that her nose was a different shape

A bag of nerves the night before the procedure on September 30, she became convinced she would not like the result.

But, discharged on the evening of the hour-long procedure, she then waited 10 days before having her bandages removed and seeing the results.

‘I couldn’t sleep for the first two nights after surgery,’ she explained. ‘It wasn’t because of pain – I just wasn’t used to the splint, but I could already tell that it was a completely different shape.

‘My dad took me to have the bandages taken off . When the nurse removed them, I broke down in tears. 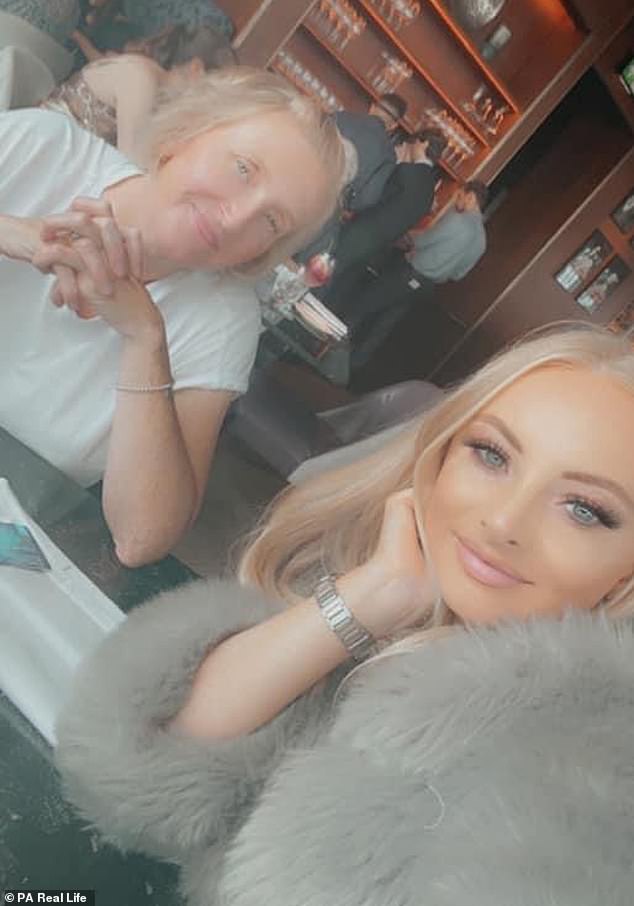 Madison after surgery with her mother Julie. She now feels much more confident socialising and no longer worries about peopel staring at her nose

‘My dad thought I was upset, but I was overcome with joy. I looked like a completely different person. It was perfect.’

Keen to show off her new nose, Madison uploaded a before and after picture to Instagram – describing herself as ‘blessed’ – and received over 600 comments of support.

To celebrate, that night she went to a John Newman gig at Manchester’s o2 Apollo.

‘I just felt different – even that very first night with the bruising and stitches still there,’ she said.

‘Before, when people looked at me, I was convinced it was because of my nose.

‘Now, I just didn’t care. It was the perfect way to celebrate.’

She said: ‘I think it was more as I’d stopped hiding in the corner when I went out with the girls than because I’d had a new nose.

‘I started being spoken to by boys and it felt great.

‘I really do feel like a new woman and have finally had the confidence to accept offers to go out on a date.’

While she is yet to fall in love, Madison is now making the most of dating.

‘I’m really enjoying making up for lost time and seeing what it is like out there,’ she said.

‘I’ve been on a few dates and was seeing one particular person for a few months, although it didn’t quite work out.

‘To anybody else out there who has been thinking about have cosmetic surgery after years of insecurity, I can only say do it!

To find out more about Transform Hospital Group, visit transforminglives.co.uk

thegirlsunhttps://thegirlsun.com
Previous articleShould you pay £100 for a first aid kit? We review a range of ready-made packs
Next articleVogue Williams looks radiant as ever in a bright pink jumper and matching skirt

A Gold Coast PE teacher has shared a snap of her typical work day lunch box, claiming it's the secret to her impossibly...
Read more
Feamil

'I do not want your boobs peeking out on my day!'...
Read more
Feamil

Icy dips in lidos, lakes and the sea can give you a daily high as good as any HRT

The first 30 seconds are the worst. The cold bites, actually bites, causing your heart to beat so fast you can almost hear...
Read more

Keeping Up With The Kardashians: Kim Kardashian copes with Kanye West AND Khloe sick with COVID-19

Kim Kardashian self-recorded the COVID-19 pandemic onset as Kanye West and her sister Khloe both tested positive for coronavirus on Thursday's episode of...
Read more

RICHARD LITTLEJOHN: So here it is Merry Christmas, nobody's having fun

Sadly, but almost inevitably, it looks like Christmas is about to be cancelled, as Boris Johnson caves in to pressure to plunge the...
Read more

Ghislaine Maxwell is under investigation by French authorities over allegations that she was involved in convicted-paedophile Jeffrey Epstein's offending in the country.Investigators are looking...
Read more
Sport

But when they awake in the spring, those connections undergo a renewal.According to the scientists, this renewal repairs vital connections in the brain,...
Read more