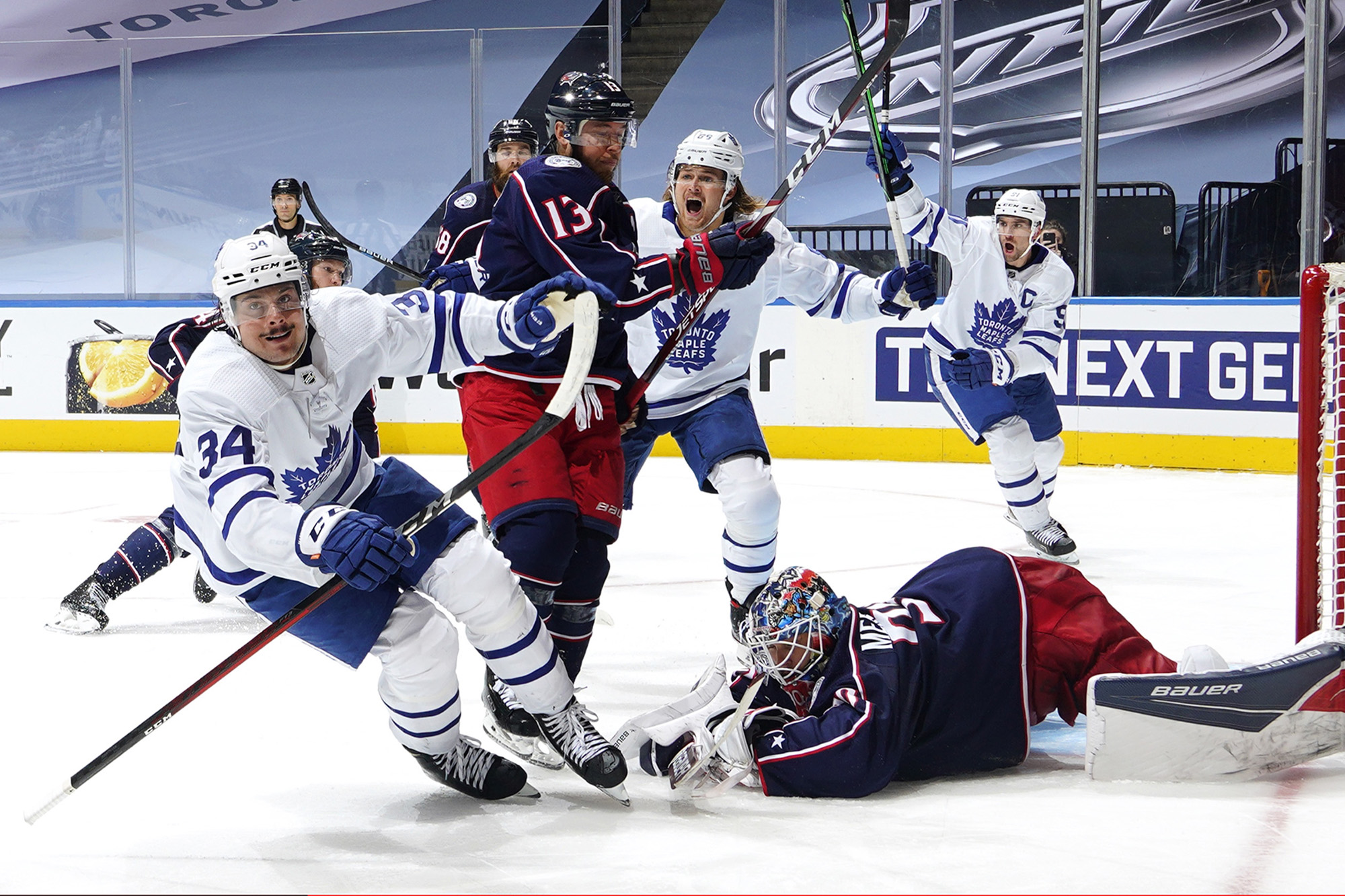 TORONTO — The Toronto Maple Leafs rallied from a three-goal deficit in the third period and Auston Matthews scored on a power play 13:10 into overtime to beat the Columbus Blue Jackets 4-3 on Friday night, tying the best-of-five qualifying series at two wins apiece.

The Leafs scored three times in 3:34 to knot the score late in a game that Columbus and goalie Elvis Merzlikins had largely controlled until then. On Thursday night, the Blue Jackets had rallied from three goals down to eventually win in overtime.

This time, with Nick Foligno in the penalty box on a questionable tripping call, Matthews beat Elvis Merzlikins from the right circle off a neat feed from John Tavares to push the series to a decisive Game 5 on Sunday.

William Nylander, Tavares and Zach Hyman scored in the third period to set up Matthews’ heroics. Frederik Andersen had 36 saves.

“Probably some of the craziest events I’ve ever seen,” Nylander said of the comeback.

Merzlikins and the Blue Jackets seemed to be cruising until the Toronto push in the last 4 minutes of regulation.

Then Nylander got his stick on a puck that trickled through Merzlikins’ legs with 3:57 left. Tavares connected from the slot 51 seconds later, and Hyman rifled one in the from the left circle to tie it with 23 seconds left after Toronto had pulled the goalie for an extra skater.

“We were getting CPR there for a little bit, and we found our way back,” Toronto coach Sheldon Keefe said. “Here we go.”

Atkinson got the Blue Jackets on the board first. Pierre-Luc Dubois picked up the puck in transition, raced into Toronto territory and delivered a pass across to Atkinson for the tap-in to give Columbus the lead 3:58 into the game. Later in the first, Merzlikins pounced on a loose puck inches from the line in heavy traffic to prevent Toronto from tying it.

Gavrikov got his first playoff goal when he fired a shot over Andersen to give Columbus a 2-0 lead 4:40 into the second period. Jenner scored another 5:42 into the third after a Toronto turnover in the Columbus zone, and the Blue Jackets seemingly had the game in hand.

“I’m not going to dissect this one,” Atkinson said. “They clearly wanted it more than us. We’ll be ready to go Sunday.”

Marner picked up three assists for the Leafs, and Matthews added a pair.

Matthews said the Leafs never lost their cool down 3-0 late.

“I think once we got one pretty quickly there, we just want to keep pushing and keep pressing, we got two and obviously there was time left, we’ve still got a game,” Matthews said. “So we just kind of rallied everybody, got everybody excited to give us a little bit of an extra boost.”

Listen to Episode 30 of ‘Amazin’ But True’: Another Playoff-less Season feat. Maggie Gray