The Girl Sun
Home U.S Illinois cop fired for shooting unarmed black teen after he and his...
U.S


A suburban Chicago police officer who shot a Black couple inside a vehicle – killing a 19-year-old man and wounding his girlfriend – has been fired, the police chief announced late Friday.

The officer who fatally shot Marcellis Stinnette and then wounded the mother of his child, Tafara Williams following what authorities have described as a traffic stop late Tuesday committed ‘multiple policy and procedure violations,’ Waukegan Police Chief Wayne Walles said in a brief statement.

No other details, including the officer’s name, were provided.

The announcement of the firing came shortly after Lake County’s chief prosecutor announced the FBI will join Illinois State Police in investigating the shooting.

‘We still haven’t seen any videos’ of what occurred, Satrese Stallworth, Stinnette’s cousin said to the Daily Herald, ‘but we are happy to see that something has been done about this.’

‘They don’t just terminate you for no reason. So evidently they have evidence showing that the officer was definitely in the wrong,’ she said. 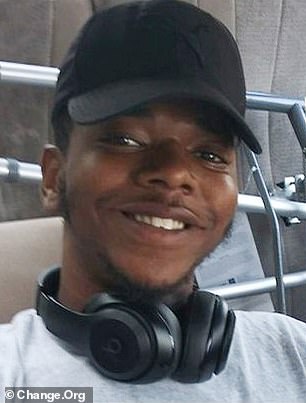 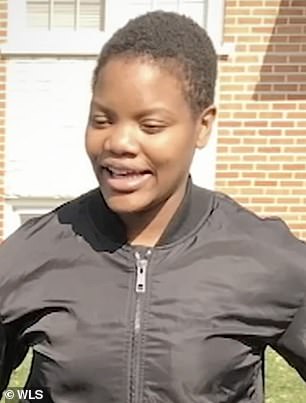 Marcellis Stinnette, 19, (left) was killed and his girlfriend and the mother of his child, Tafara Williams, (right) was seriously injured when a police officer in Waukegan opened fire on Tuesday night. On Friday night it was announced the white officer involved had been fired 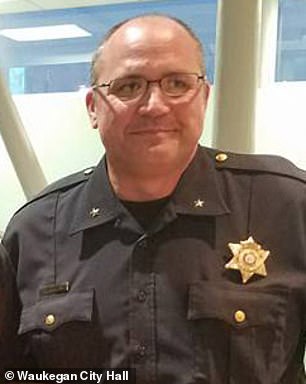 The officer who fatally shot Marcellis Stinnette and then wounded the mother of his child, Tafara Williams, following what authorities have described as a traffic stop late Tuesday committed ‘multiple policy and procedure violations,’ Waukegan Police Chief Wayne Walles, pictured, said in a brief statement

‘I am confident in the work being done by the Illinois State Police and welcome the assistance of the FBI,’ Nerheim said in a statement. ‘As I have said before, once the investigation is concluded, all the evidence will be reviewed and a final decision will be made with respect to any potential charges.’

Waukegan police have said Williams was driving and Stinnette was a passenger in a vehicle that fled a traffic stop late Tuesday and that the vehicle was later spotted by another officer.

Police said that as the second officer approached, the vehicle started moving in reverse and the officer opened fire. No weapon was found in the vehicle.

Police have said the car, which was being driven by Williams, fled as a white officer approached them following a traffic stop just before midnight.

The officer who shot the couple is Hispanic and had been with the Waukegan Police Department for five years.

As a second officer approached the car, police said Williams started reversing towards him and he fired his gun into the vehicle.

During a Thursday demonstration, Clyde McLemore, head of the Lake County chapter of Black Lives Matter, called for a federal investigation.

Activists and relatives of the couple also have demanded the release of police video of the shooting, which authorities say has been turned over to investigators.

Activist Chris Blanks said the video is particularly important because the police version of events and the version Clifftina Johnson said her wounded daughter, Williams, shared with her appear to contradict each other.

Johnson said her daughter told her that Williams and her boyfriend had done nothing to provoke the officer. 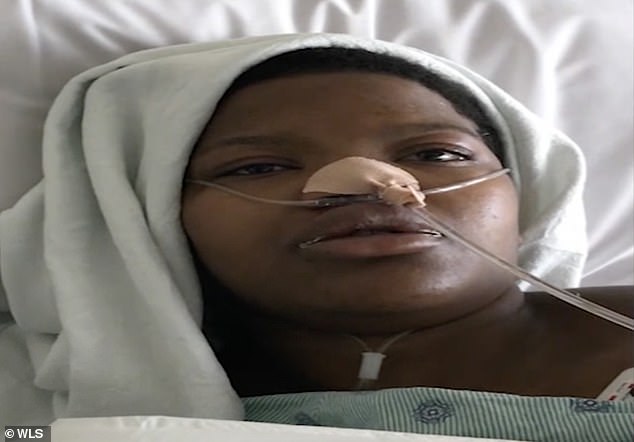 Speaking from her hospital bed on Thursday, Tafara Williams – who was shot in the stomach and hand – said she and her boyfriend had done nothing to provoke the shooting and questioned why officers fired

Speaking from her hospital bed on Thursday, Williams – who was shot in the stomach and hand – told ABC7 that they had done nothing to provoke the shooting and questioned why officers fired.

‘Why did you shoot? I didn’t do nothing wrong. I have a license. You didn’t tell me I was under arrest,’ she said.

Williams’ mother, Clifftina Johnson, said her daughter had also insisted they hadn’t done anything wrong when she first visited her in hospital.

‘When I got there, she said, ‘Mama, they just shot us for nothing’,’ her mother, Clifftina Johnson, said.

Williams’ mother said her daughter had asked about her boyfriend but that she initially didn’t have the heart to tell her that he was dead.

Police have so far not confirmed why the couple had been pulled over for the initial traffic stop. 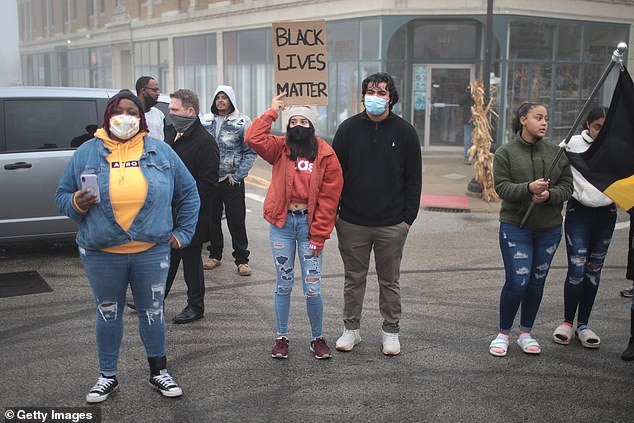 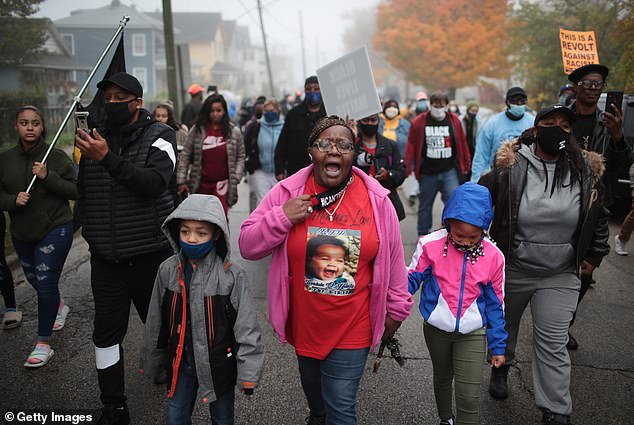 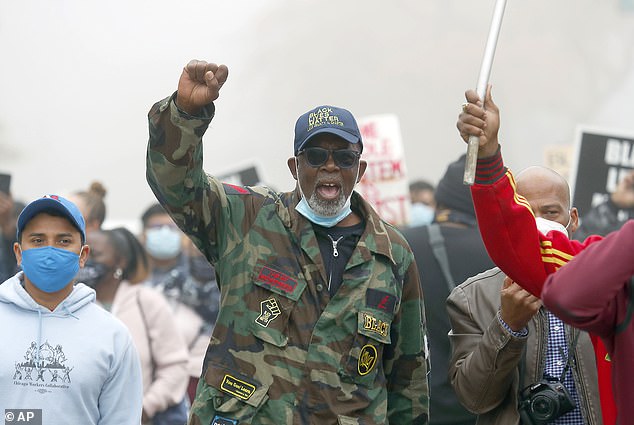 Local Black Lives Matter organizer Clyde McLemore (above) said he wants the police officers involved to be prosecuted. He called on the Department of Justice to step in and investigate the shooting rather than the state police

The families of the couple are demanding authorities release any video that might have shown what happened, as well as further information about the shooting.

The body camera and squad car video that the family wants released to the public have been turned over to Illinois State Police.

Lake County State’s Attorney Michael Nerheim noted that it may be several weeks before the investigation is complete.

Waukegan Mayor Sam Cunningham, who knows the families of the couple personally, said the shooting had affected him personally.

‘This is tough on this community. I know this family personally. Their great-grandmother used to babysit me. To speak to them about this, yeah it hurts,’ Cunningham said.

‘I’m a black man who grew up in that same neighborhood. It could have been me.’ 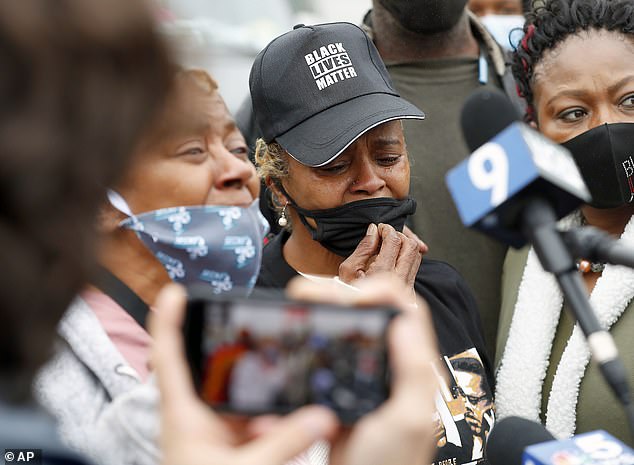 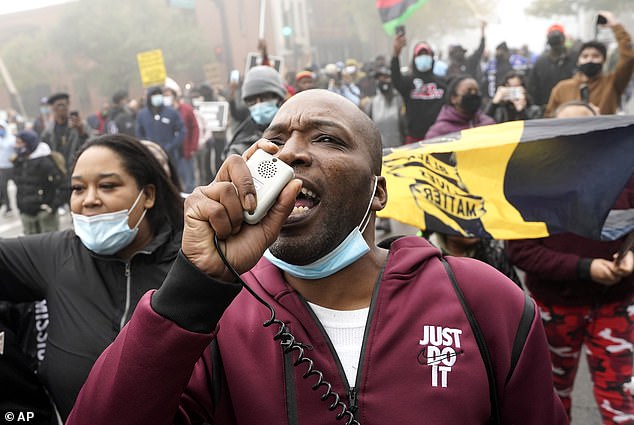 Cunningham asked residents to wait until all the facts are known before reacting to the shooting, saying there was a lot of ‘uncertainty’ and ‘rumors flying around’.

He added that he was nervous for Waukegan given the recent unrest that has occurred in other parts of the country.

‘I’m nervous for Waukegan. We’ve seen this play out through this country. It just rips through communities, and it takes years to rebuild,’ he said.

A protest held on Thursday in Waukegan started with a few dozen people at the site of the shooting before marching on to the police headquarters.

He called on the Department of Justice to step in and investigate the shooting rather than the state police.

‘We are tired of the police investigating the police,’ he said.

The rally held on Thursday was peaceful. 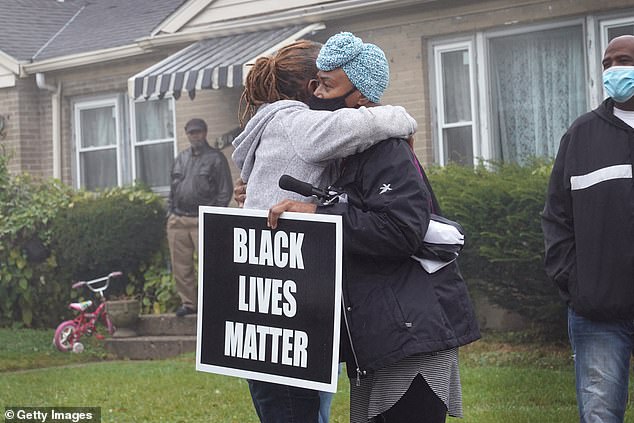 Demonstrators protested the October 20 police shooting that led to the death of 19-year-old Marcellis Stinnette and left his girlfriend, 20-year-old Tafara Williams, with serious injuries 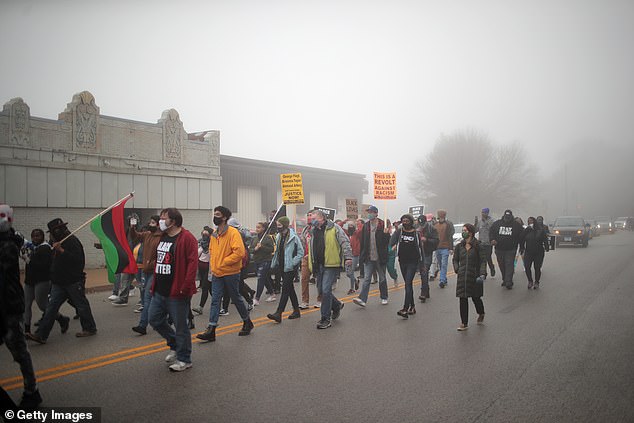 About 100 protestors, including many family members of the shooting victims, marched from the shooting scene to City Hall, making stops at the police station and courthouse on the way

‘We’re not here to rip up our own town,’ McLemore said.

Waukegan is about 15 miles south of Kenosha, Wisconsin, where violent protests erupted after black man Jacob Blake was left paralyzed after being shot seven times in the back by police in August.

Both of the officers involved in the Waukegan incident have been placed on administrative leave pending the results of the investigation. 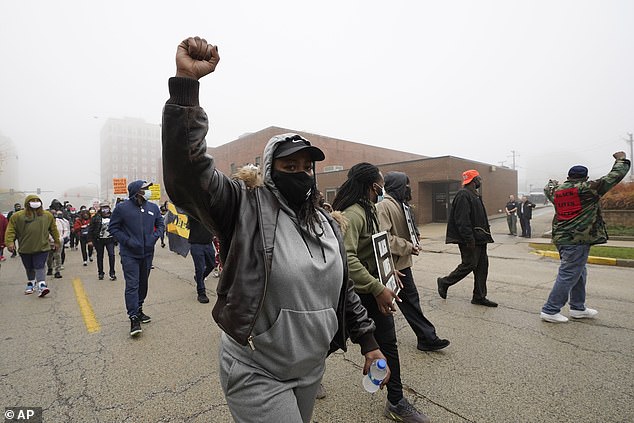 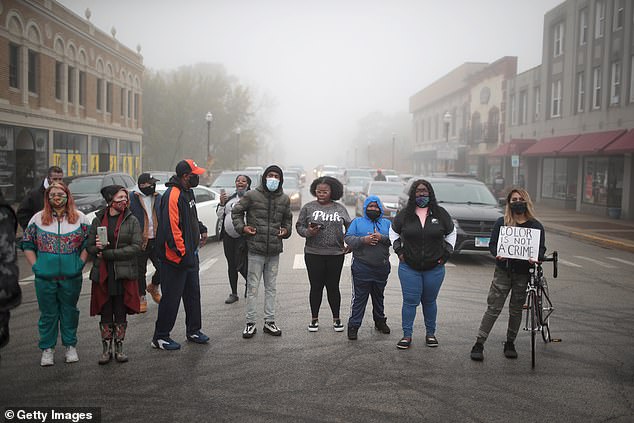 Demonstrators denounced violence but demanded accountability in statements along the way

thegirlsunhttps://thegirlsun.com
Previous articleZendaya strikes a pose in front of ballot box as she carries out civic duty with pal Darnell Appling
Next articleMurder probe on National Trust estate Watlington Hill after woman in sixties is found dead in woods

Former national security advisor Mike Flynn said that he faced 'political persecution of the highest order' prior to his pardon from President Trump.One...
Read more
U.S

Mother shows off her epic panty filled with hundreds of decorations, ornaments and board games

An Australian woman has showed off her mother's 'Christmas pantry' filled with hundreds of tiny Santas, baubles, streamers and plenty of board games...
Read more
News

Trump reunion: Donald will travel to Camp David today to meet with his whole family

President Donald Trump will travel to Camp David on Friday to meet with his family as he admitted he will leave the White...
Read more
Tv & Show

Molly Sims has been known to serve a drop dead gorgeous look or two in her two decades as a model.But the model/actress...
Read more