How to tell if you DO have a temperature

Fever is one of the major tell-tale signs of infection with coronavirus — when we come down with an infection, our temperature can rise as part of

Fever is one of the major tell-tale signs of infection with coronavirus — when we come down with an infection, our temperature can rise as part of our immune response to kill it off.

The rise is triggered by chemical messengers released by immune cells travelling to the hypothalamus, the part of the brain that controls temperature, telling it to increase the heat within your body — known as the core temperature.

‘Viruses are more likely to die off when temperature goes above 38c,’ says Dr William Bird, a GP in Reading, Berks.

Not only does a high temperature directly kill the virus, it also triggers a cascade of responses in the body that fire up immunity. For example, a temperature above 37c can speed up the activity of NF-kB proteins in our cells, which turn on genes involved in the immune response, a 2018 study from the University of Warwick found. 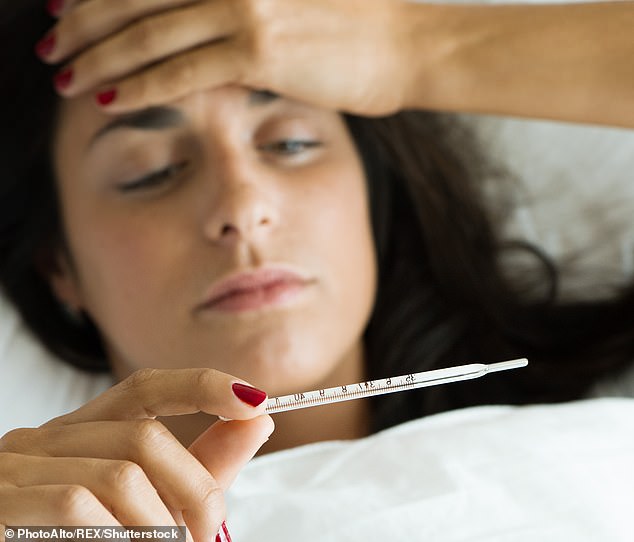 Fever is one of the major tell-tale signs of infection with coronavirus — when we come down with an infection, our temperature can rise as part of our immune response to kill it off

Other research has shown that specific virus-killing cells, T-cells, also rev up their activity when temperature rises.

‘There is a belief that lowering the temperature may delay getting better and prolong illness,’ says Dr Bird. Saying that, though, fevers can be serious, so seek the advice of a GP, particularly with babies and young children.

Here, experts reveal what everyone should know about this vital measurement — and the surprising factors that can affect it.

WORK OUT WHAT’S ‘NORMAL’ FOR YOU

Our body temperature fluctuates naturally over the day — and night.

One study based on readings from more than 300 people found it is lowest between 3am and 5am and highest between 4pm and 6pm, with a difference of about half a degree celsius between the two times, according to U.S. researchers writing in the Journal of General Internal Medicine in 2018. This suggests that if you want to take a baseline temperature, first thing in the morning is the best time to measure.

However, doctors have noticed that temperature may spike on and off throughout the day in those sick with coronavirus, says Dr Patricia Macnair, a specialist in ageing and palliative care in Surrey, although it is not yet known why this might be.

‘If you’re concerned, take more than one temperature reading a day — say, morning, afternoon and evening,’ she says.

‘If you think you may be infected, keep an eye on other symptoms [for example, a dry cough, loss of smell or taste and fatigue] and if they become more severe, call 111.’ 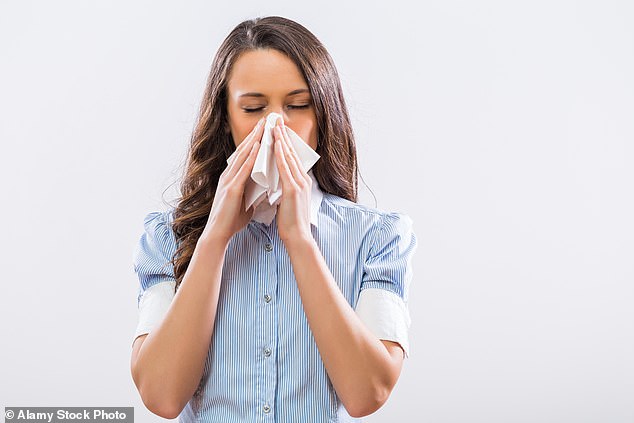 Contrary to popular belief, you don’t necessarily feel hot if you have a fever. ‘This is one of the big misconceptions about high temperatures,’ says Dr Bird

WE BECOME COLDER AS WE GET OLDER

Younger women with a normal body weight tend to have a higher body temperature than older men who are overweight, according to a 2011 study in the Journals of Gerontology, which analysed the body temperatures of more than 18,600 people.

The analysis also found men were generally colder than women, with scientists suggesting female hormones may play a role (as temperature tends to fall after menopause and is known to fluctuate during the menstrual cycle).

It’s thought that coronavirus can live on hard surfaces such as plastic for up to 72 hours, if not longer, so right now you should not be sharing thermometers — even at home between family members.

But if you only have one at home, you can wash the end of an oral thermometer with soap and water, says London GP Dr Ross Perry, or wipe it down with an alcohol or antimicrobial wipe if you have them.

With an ear thermometer, the best solution is to use disposable tips.

It also found women in their 20s had an average body temperature of 36.5c, while the women in their 80s had one of 36.1c. In men, a similar drop was found. ‘We don’t know why it happens, but the body generally slows down as we get older and this may be reflected in temperature,’ says Dr Macnair.

BEING FAT CAN MAKE YOU WARMER

Also, the more someone weighed, the higher their average temperature was. Why exactly this should be so is unclear, but one theory is that inflammatory chemicals released by fat could be the cause of the increased temperature.

ELDERLY CAN HAVE BUG BUT NO FEVER

Another fascinating theory is a lower body temperature may be associated with living longer. It’s been shown that lowering body temperature in mice increases lifespan by around 20 per cent.

As well as this lower baseline temperature in older people, their immune systems don’t trigger such intense responses to infections. As such, older people may not always develop a fever in response to infection.

‘This means you shouldn’t rely on the presence of a high temperature as the only sign of infection and people should pay extra attention to other symptoms such as pain, cough or breathlessness — and unusual levels of confusion,’ says Dr Macnair.

EAR THERMOMETERS ARE BEST FOR HOME

The most accurate body temperature reading, often used in intensive care units, comes from using a rectal thermometer as it measures inside the body rather than on the periphery.

But as you’re unlikely to want to use this approach at home, the next best option is in the ear, which takes the temperature of the tympanic membrane (the eardrum), says Dr Bird.

The eardrum shares the same blood supply as the hypothalamus, so it gives a good idea of what’s happening internally.

But don’t test the temperature in the ear if you have been lying on it, as this can lead to higher readings if the ear is warm, a study in Turkey found.

Use the other ear instead — then stick with that ear when measuring throughout the day to get the most accurate assessment of changes in body temperature.

Ear thermometers also shouldn’t be used if you have an ear infection, as the ear will already be hot due to inflammation.

If you do have to use an oral thermometer, avoid using it within 20 to 30 minutes of a hot or cold drink, food, exercise or smoking, suggests Dr Ross Perry, a GP in London. This is because all of these can temporarily raise temperature in the mouth and, in the case of exercise, throughout the body.

‘Leave the thermometer under the tongue for one or two minutes, and try to stay still for the most accurate reading,’ he says.

Despite the convenience, forehead strips or taking temperature in the armpit are believed to be the least accurate as they are truly external. ‘If you do have to take a temperature under the arm, add 1c to the figure to get a more accurate reading,’ says Dr Bird.

YOUR MIND CAN BRING ON A FEVER

Stress can cause a rise in body temperature — a condition that’s called psychogenic fever.

It’s most common in children and adolescents, with an analysis by researchers in Japan in 2007 finding that stress or psychological and emotional agitation accounted for 18 per cent of unexplained cases of fever in children.

IF YOU FEEL HOT, IT COULD BE A COLD

Contrary to popular belief, you don’t necessarily feel hot if you have a fever.

‘This is one of the big misconceptions about high temperatures,’ says Dr Bird.

‘If you feel hot, you almost certainly don’t have a fever, more likely a cold.

‘When we have a fever we usually feel cold and shivery and want to wrap ourselves up,’ he explains.

‘You do, however, feel hot to touch, so feeling the forehead with the back of a hand is actually a very good way to tell whether you have a fever if you don’t have a thermometer.

‘If your skin feels cold, you almost certainly don’t have one.’

Finding value plays in fantasy baseball matters more than ever 0