A doctor has asked a grieving family if they could confirm the death over video link amid the coronavirus pandemic.

Gillian Orman, from Southampton, rang the NHS after her mother Kathleen Bricknell, 86, died.

A doctor said everyone in the house – including her deceased mother – would have to wear a mask during an in-person visit to confirm the death.

The doctor originally asked if she could confirm the death over video link, but Mrs Orman said she refused the ‘undignified’ offer.

‘The receptionist said a doctor would come out to confirm my mother’s death,’ said Mrs Orman. 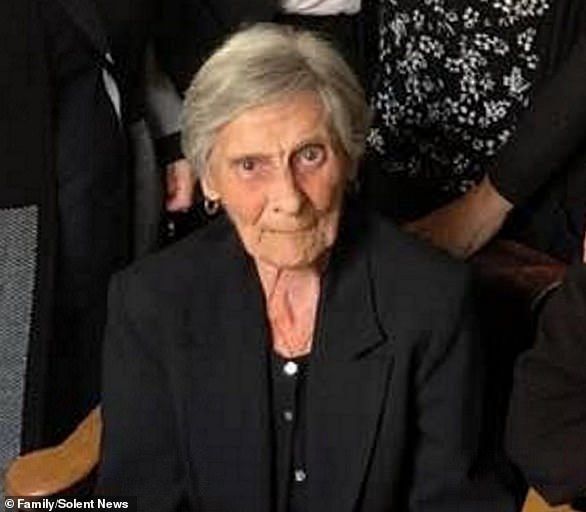 ‘The doctor rang and said she wanted to confirm her death via video link. I couldn’t believe it – what she was suggesting was so undignified.

‘I refused, saying I wanted the doctor to come out to the house. She said she would only come if everyone in the property was wearing a face mask, including my late mother.

‘I know we’re in the middle of a Covid epidemic but you expect support when something like this happens.’

Her mother was suffering from chronic obstructive pulmonary disease, a lung complaint characterised by long-term breathing problems, and her death came three months after the death of Mrs Orman’s daughter Katherine, 34.

Dr Dan Baylis, chief medical officer at Solent NHS Trust, said: ‘During the current pandemic, GP surgeries across the country are asked to consider offering remote consultations to patients and families, including to verify whether someone has passed away. This is to protect both staff and patients.

‘We understand that many families would prefer to be seen face-to-face and we will always accommodate this. Our family liaison officer will be contacting the family to discuss their concerns so they can receive the right support.

‘We will use their feedback so we can actively improve our services and the level of care we offer to all patients and their families.’

Rachel Power, chief executive of the Patients’ Association, said ‘We’d expect the NHS to carry out such sensitive processes as certifying a death in person, in a way that respects the dignity of the person who has died.’

Geologists claim to have found evidence of the long-lost Resurrection tectonic plate that has been a topic of debate among the scientific community...
Read more
News

STEPHEN GLOVER: So much for rule of law when police won't probe a burglary…

We British are brought up to believe that our country is the freest in the world. It is supposedly the home of liberty...
Read more
News

Dr Raghib Ali, one of the main researchers behind today's report, ruled out structural racism as...
Read more
News

Geologists claim to have found evidence of the long-lost Resurrection tectonic plate that has been a topic of debate among the scientific community...
Read more

'We are struggling at the moment': Ilkay Gundogan admits Manchester City are not their usual best

'We are struggling at the moment': Ilkay Gundogan admits Manchester City...
Read more

Sofia Richie is sporty chic in an all black workout ensemble...
Read more

'Why did I never think of this?' Mum's 'genius' toilet paper...
Read more

The lead plaintiff in a lawsuit against the disgraced former Hollywood producer Harvey Weinstein has written a musical about her experiences. Louisette Geiss, a former...
Read more
News

What they DON'T tell you before you escape to the country

Last summer there was an unprecedented exodus from Britain’s cities as urbanites, fed up with lockdown and freed from the office, sold up...
Read more
Tv & Show

Trisha Goddard appears in good spirits as she prepares to jet...
Read more