GDP plunged by 2.2 per cent in three months before lockdown

GDP plunged by 2.2 per cent in three months before lockdown – the biggest fall since 1979 and WORSE than previously thought – as the T

GDP plunged by 2.2 per cent in three months before lockdown – the biggest fall since 1979 and WORSE than previously thought – as the Treasury prepares to borrow another £50BILLION to prop up the economy

The UK economy shrank by more than though in the three months before lockdown, it was revealed today.

Revised figures showed GDP tumbled by 2.2 per cent between January and March – the joint largest fall since 1979.

The plunge was bigger than the 2 per cent previously estimated, and underlines the scale of the pain facing the country.

UK plc is thought to have fallen off a cliff in after the draconian lockdown was imposed on March 23, with forecasts for the current quarter suggesting the worst recession in 300 years. 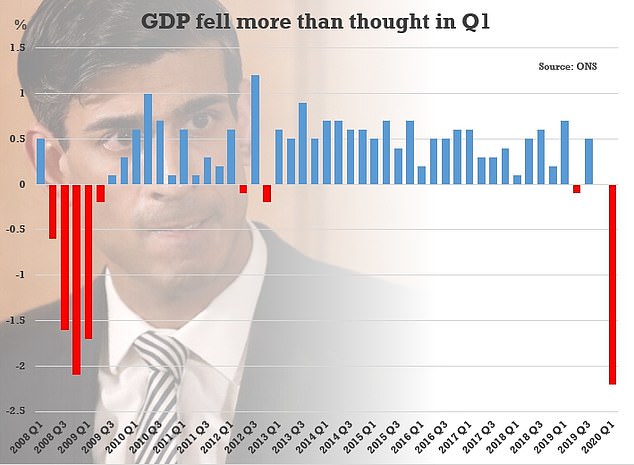 Revised figures showed GDP tumbled by 2.2 per cent between January and March – the joint largest fall since 1979

Recent ONS figures showed the economy plummeted by a record 20.4 per cent in April, having suffered a 6.9 per cent reduction the previous month.

Meanwhile, it has emerged that the Treasury is planning to borrow another £50billion in August to plug a growing gulf in the public finances.

That would mean £275billion being added to the debt pile in the first five months of the year.

Jonathan Athow, deputy national statistician at the ONS, said: ‘Our more detailed picture of the economy in the first quarter showed GDP shrank a little more than first estimated.

‘This is now the largest quarterly fall since 1979.

‘All main sectors of the economy shrank significantly in March as the effects of the pandemic hit.

‘The sharp fall in consumer spending at the end of March led to a notable increase in households’ savings.’

Boris Johnson will today pledge to ‘build, build, build’, bringing forward a massive programme of public works, in a bid to revive the economy.

He will say Britain can ‘not just bounce back, but bounce forward – stronger and better and more united than ever before’ in the wake of the coronavirus. 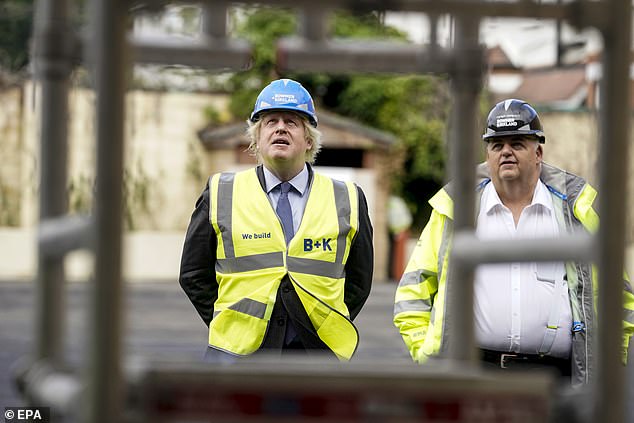