Home cooks are raving about an ‘Instagram famous’ baker’s simple recipe for Lotus Biscoff cookie bars, made from five supermarket ingredients and a jar of the iconic spiced cinnamon spread.

Eloise Head, the 26-year-old founder of FitWaffle Kitchen, an Instagram page dedicated to decadent desserts that take just a few minutes to prepare, has amassed almost 18,000 likes on the video tutorial since it was shared on Monday.

The ‘flapjacks’ – the term for baked oat bars in the UK and Ireland – are made with butter, brown sugar, golden syrup, rolled oats, white chocolate and a jar of the Belgian-made sweet.

The self-taught London chef describes Biscoff as her ‘favourite’ flavour and says the treats are remarkably easy to make for bakers of all skill levels, beginners included. 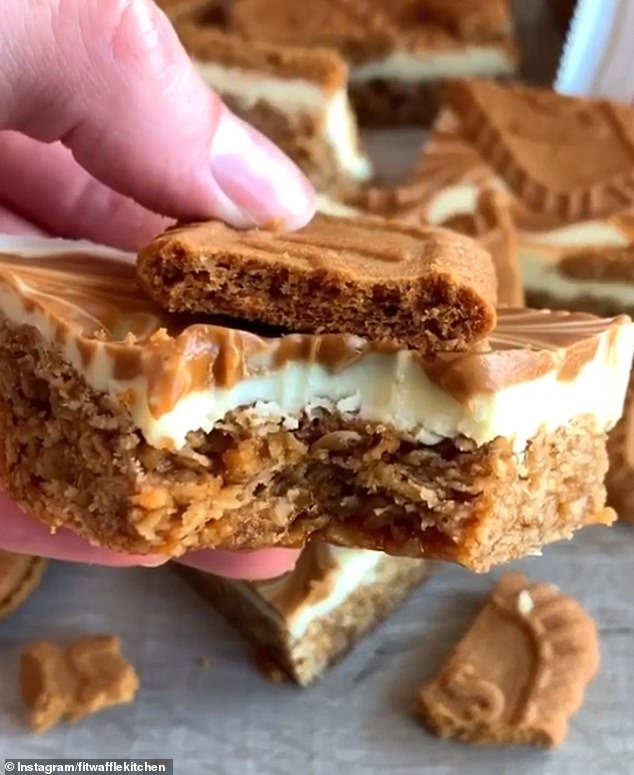 Self-taught baker Eloise Head’s Lotus Biscoff and white chocolate flapjacks, which she describes as her ‘favourite’ ever flavour

Once the liquid is smooth, she stirs in 300 grams of rolled oats, mixing well, then pours the mixture into a lined baking tray and bakes in the oven at 160 degrees Celsius for 20 to 25 minutes.

‘They will still look soft when they come out,’ she said.

Ms Head leaves the flapjacks to cool for half an hour, then pours 250 grams of melted white chocolate over the top, smoothing out to ensure it spreads evenly.

Finally she drizzles 60 grams of melted Biscoff spread over the top and runs a knife through the liquid, creating a decorative pattern. 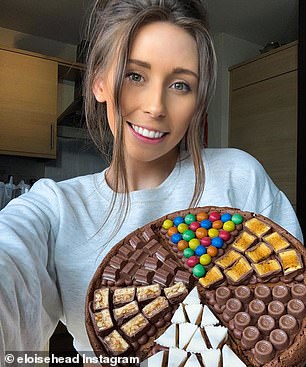 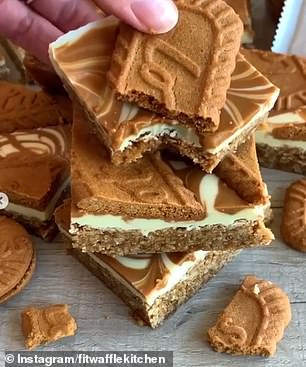 Lotus Biscoff biscuits can be pushed into the topping before it sets for a finishing touch, but this is optional.

The flapjacks should be refrigerated for at least an hour before being sliced into individual pieces.

In the caption of the video, Ms Head thanked her 764,000 followers for their continued support since launching the FitWaffle Instagram page seven months ago at the start of the coronavirus crisis.

Her simple dessert recipes drew a loyal audience thanks to the unprecedented baking craze that swept the world during the first months of the pandemic, when hundreds of millions were confined to their homes.

With restaurants shut and travel restrictions slapped across dozens of cities, families were left with little to do but experiment in the kitchen.

Isolation paid dividends for influencers like Ms Head, who told Daily Mail Australia in March that she felt ‘very proud to help people keep occupied’ in the new era of social distancing.

Her fans were quick to express their gratitude in return.

‘Your page definitely worked for me, never thought I’d learn how to bake,’ one man replied.

‘I was a lost cause but doing lockdown, I stumbled on your page and baking has helped me out.’

1. Melt butter with Biscoff spread, sugar and golden syrup over a low heat.

2. Once the liquid is smooth, stir in rolled oats, mixing well, then pour the mixture into a lined baking tray and bakes in the oven at 160 degrees Celsius for 20 to 25 minutes.

3. Leave the flapjacks to cool for half an hour, then pour melted white chocolate over the top, smoothing out to ensure it spreads evenly.

4. Drizzle melted Biscoff spread over the top and run a knife through the liquid, creating a decorative pattern.

thegirlsunhttps://thegirlsun.com
Previous articleCoronavirus: Remdesivir has 'little effect' on death risks, says WHO
Next articleIrina Shayk treats her daughter Lea, 2, to a fun day at the Central Park Zoo

Former First Daughter Sasha Obama has become a TikTok star after a video of her rapping to a City Girls song went viral...
Read more
Feamil

'They are so, so soft and hug you in the right...
Read more
Feamil

Mum, 22, has 'four little marble' cysts squeezed from her scalp in The Bad Skin Clinic

A young mum has 'four little marble' cysts squeezed from her scalp in The Bad Skin Clinic.Tonight's episode of the Quest Red show...
Read more

Three alleged thieves accused of involvement in the £50m raid on Tamara Ecclestone's Kensington mansion have appeared in court ahead of their trial...
Read more

The hit series Saved By The Bell aired from 1989 until 1993, centered around a group of friends as they dealt with social...
Read more

SAG Award nominee Isla Fisher stood out in a colorful ensemble while out and about in Los Angeles' Studio City neighborhood on Monday...
Read more

'Those players come because they have a coach of that level':...
Read more
Feamil

Allowing the young to go back to normal while shielding the elderly would have 'dire consequences' for the NHS, SAGE has warned. In leaked...
Read more