Ex-Neo Nazi reveals how he was groomed into extremism


A former neo-Nazi has revealed how he was groomed into extremism as a teenager for 20 years until witnessing a black man being threatened in front of his family – and now helps others leave far-right groups.

Nigel Bromage, 54, from Birmingham, quickly rose up the ranks and become a West Midlands organiser for the British Movement, which openly promotes Nazism.

He was first approached by an organisation called Birmingham Against The IRA – and was eager to join after seeing the violence caused by the Irish group – but soon discovered they were actually a front for the National Front, a far-right political party.

Appearing on the podcast Changes with Annie Macmanus, out today, Nigel candidly explained how the group ‘would try and cut you away from your old friends’ and play on a young person’s need for family.

But after 20 years, Nigel revealed his wakeup call came after a black victim was threatened by extremists in front of a woman and children, which shocked him into escaping the organisations and sees him now fight against radicalisation. 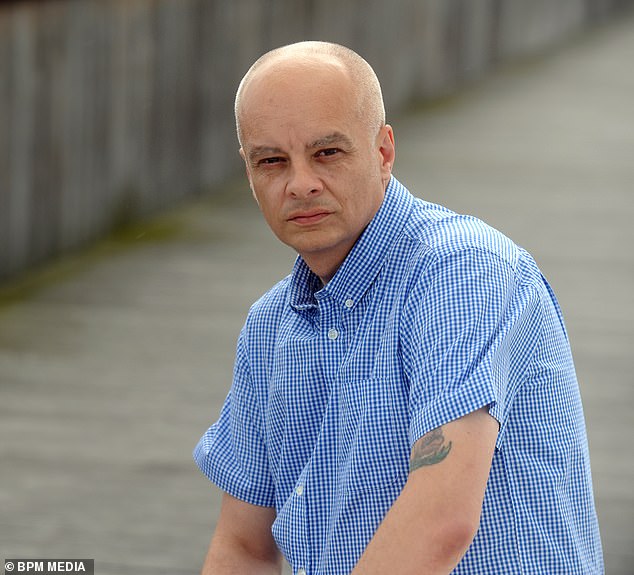 Nigel Bromage (pictured), 54, originally from Birmingham, quickly rose up the ranks and become a West Midlands organiser for the British Movement, which openly promotes Nazism 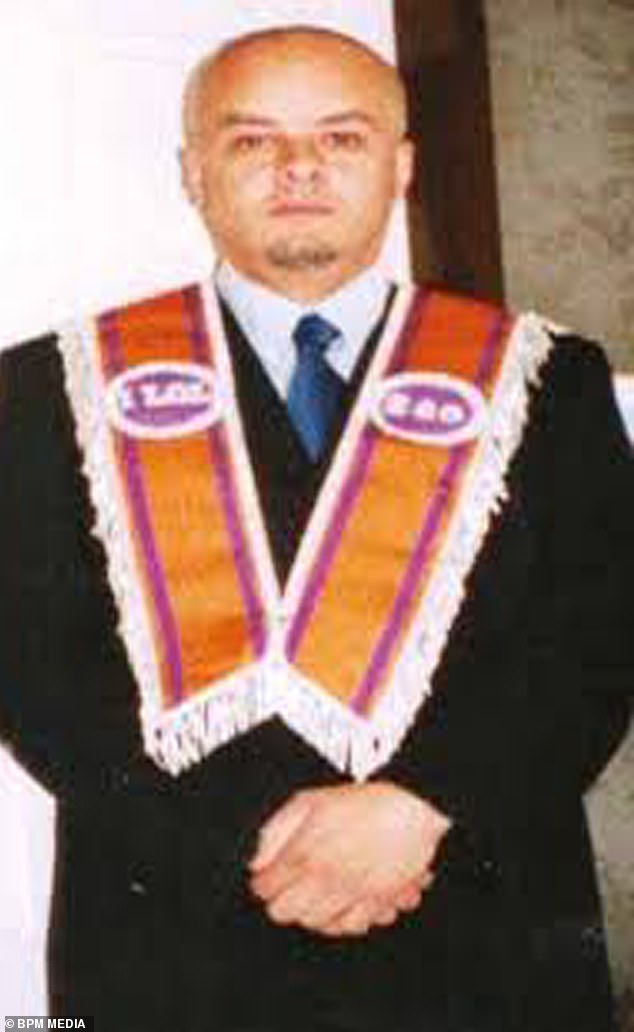 Nigel (pictured during his far right days) was first approached by an organisation called Birmingham against the IRA – but soon discovered they were actually a front for the National Front, a far-right political party

Speaking on the podcast, Nigel said: ‘I’m a working-class lad, I was built up in a high-rise block as a young person. Growing up I didn’t really get involved with anything which was political, it was just like every other person.

‘I tried to do good in school which wasn’t always easy. I grew up with my mum and dad, both working class, very left wing and they always told me if I believed in something then I should stand up for that.’

But soon Nigel was approached by a political group looking to fight against the IRA, a violent organisation which wanted to end British rule in Northern Ireland and facilitate Irish reunification in the 1970s to the 1990s.

WHAT IS THE IRA?

The Irish Republican Army (IRA) is a republican military organisation who seek the end of British rule in Northern Island, the reunification of Ireland and the establishment of a republic.

It was created in 1919 and associated with left wing Irish republican party Sinn Fein.

In the years that followed the IRA claimed responsibility for a series of bombings across Ireland, England and Europe.

In July 2005 the IRA announced the end of its armed campaign and promised to only pursue its goals using peaceful tactics.

‘I was actually recruited at school and it was as simple as somebody gave me an anti IRA leaflet,’ Nigel explained.

‘There was quite a sort of strong feeling towards the IRA from the city as a whole. The leaflet just talked about if you think terrorism is wrong do something about it.

‘What really hit me was there was a picture of a bomb victim and that picture sort of triggered me to think, “Do you know what? I need to do something about this”. So, I went back to the gentleman and said “You’re right, terrorism is wrong, what can I do?”

‘At that point he was really relaxed and that’s why I felt really strange. He was really friendly from the very start and just said take some time to think about it, if you want to get involved, I’ll come back in a few weeks and we can talk about it.

Nigel added that when he first started attending meetings, it was about being anti-terrorist and patriotic but there was ‘no mention of race, colour, religion or anything like that’.

But eventually Nigel discovered that the group was a front for the National Front, and that ‘the whole idea was to recruit people on a single issue and then via that get them involved in more extreme groups’.

After his findings, Nigel recalled: ‘They said “give us one chance, you haven’t heard anything racist, you’ve heard no racist jokes”. And I said “okay, I’ll give you six months” and that six months turned into nearly 20 years.’

Nigel revealed that the organisation used his mother’s death at the age of 18 to make him feel like he needed them as a replacement family, and would encourage him away from his friends.

‘The way it works with these individuals, they become your best friends. They try and cut you away from your old friends,’ he said. 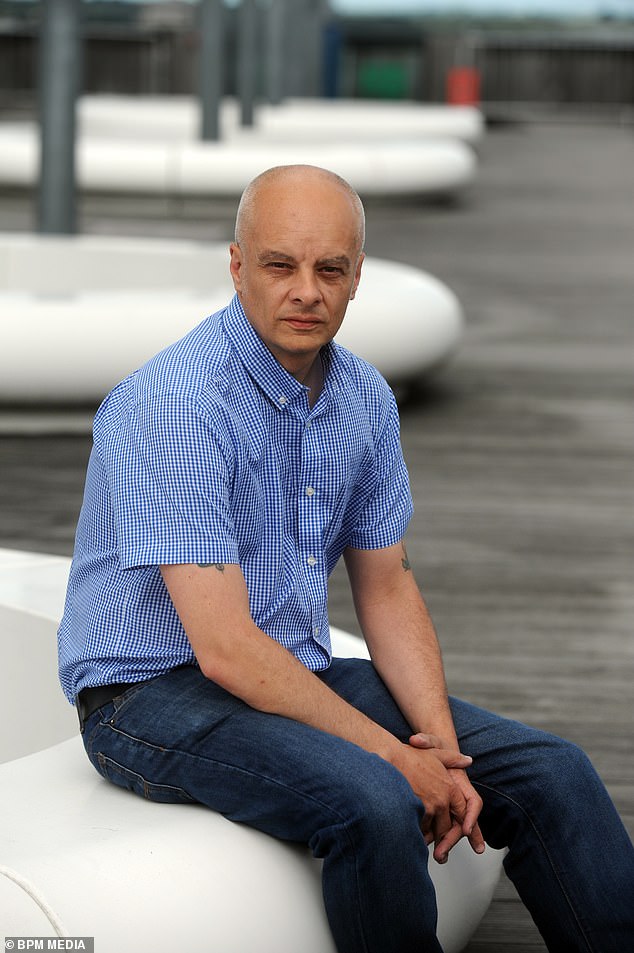 After 20 years, Nigel (pictured) revealed his wakeup call came after a black victim was threatened by extremists in front of a woman and her children, which shocked him into escaping the organisations and sees him now fight against radicalisation 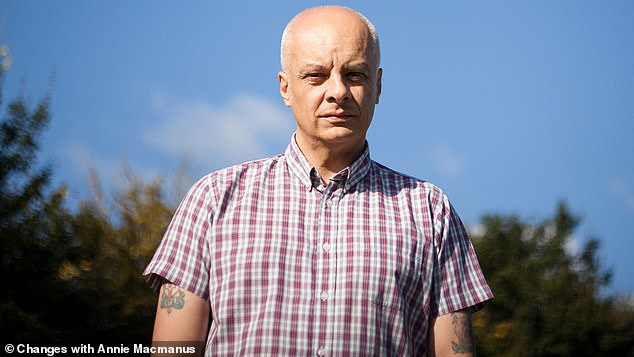 Nigel (pictured) has set up an organisation called Exit UK, which helps people to get out of far-right groups or to prevent them from joining in the first place 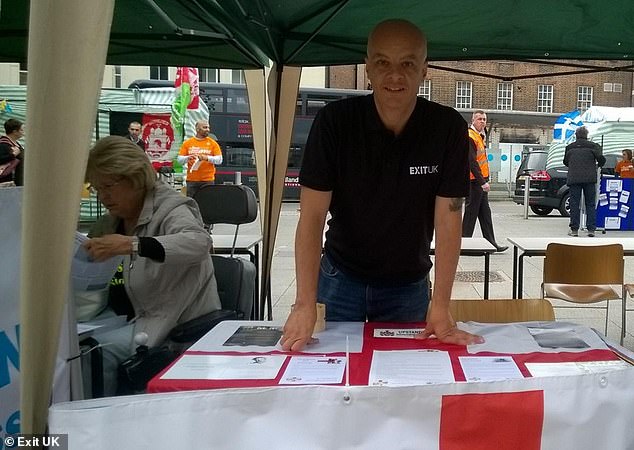 Nigel’s (pictured) turning point came following a racist attack in Birmingham, which the former neo-Nazi says: ‘Was the moment for me, where I just thought, “I’m out of there, I need to leave”.’

‘They would keep telling me “you need to have time for yourself… here’s some free tickets to the football and concerts”. But when I look back, actually that was all about getting you to embrace a new group of friends and reject your old friends and the old friends I had eventually walked away because they couldn’t change my opinions.’

Nigel added: ‘They offered me an alternative family really so they became like family number two. Dad didn’t cope well [after my mother’s death], if I’m honest, so he started to drink a little bit more than anybody should.

‘I didn’t handle the grief very well either as a young person, I got involved in alcohol, went on to other substances. But because I was so angry, I think the far-right gave me somewhere to release the anger as well.’

WHAT IS THE NATIONAL FRONT AND BRITISH MOVEMENT?

Founded in 1967, the National Front is a far-right, fascist political party in the United Kingdom. It is currently led by Tony Martin.

It has never been elected to the British or European Parliaments, but was formerly one of the most high-profile fascist street movements in Britain.

It was formed as a political party but later appeared more as a pressure and activist group, with a history of violence.

Eventually Nigel said he ‘got bored with the National Front’ so looked for something ‘more extreme’ and joined a group called British Movement, an open neo-Nazi organisation.

‘I quickly rose up the ranks and become a West Midlands organiser for them. It was really about promoting national socialism and Nazism’, he said.

‘And forgetting things about elections and trying to intimidate communities and try and raise the feeling of fear and try and create a split in the community.’

He added that he was even trained to ‘deal with’ everyday situations: ‘You get supported and trained to deal with situations like that. You learn to live a life in the normal world where you will lie through your teeth and you will basically cover up everything.

‘And you would just feel that the normal world was just somewhere to make a living and create money so you can give back to the cause.’

However, Nigel’s turning point came following a racist attack in Birmingham, which the former neo-Nazi says: ‘Was the moment for me, where I just thought, “I’m out of there, I need to leave”.’

Recalling the incident, Nigel said: ‘There was [far-right group] meeting in Birmingham City Centre and [afterwards] we all came out and all hell was breaking loose.

‘It was explained to me that a black gentleman called one of the young people a Nazi-something and he was going to teach him a lesson.

‘What really stuck out for me was like crying and when I looked round there was a woman at a bus stop with two kids and that really hit home, I just thought, “I can’t let this attack happen”. 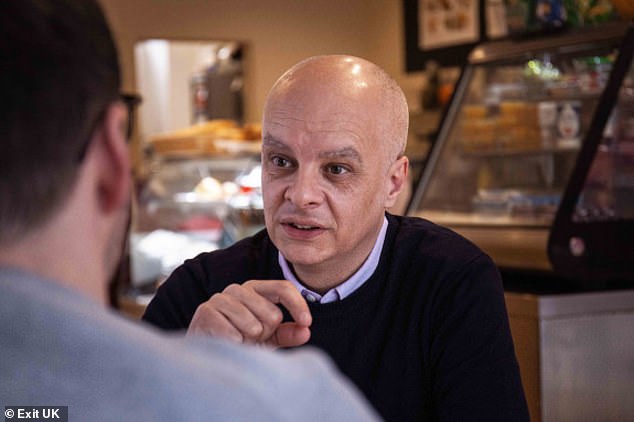 Recalling the incident, Nigel (pictured) said: ‘There was [far-right group] meeting in Birmingham City Centre and [afterwards] we all came out and all hell was breaking loose’ 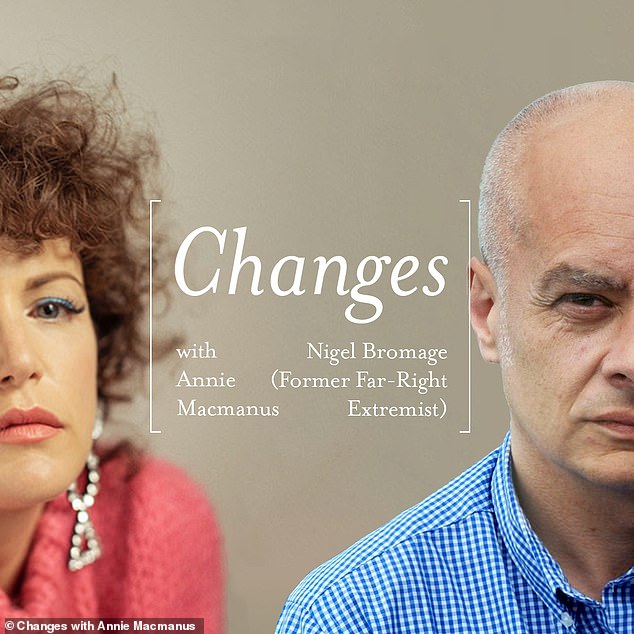 Appearing on the podcast Changes with Annie Macmanus, out today, Nigel (pictured right) candidly explained how the group ‘would try and cut you away from your old friends’ and play on a young person’s need for family

‘I stepped in the middle and said to get to him, “You’ve got to get through me”. It was completely stupid. These [far-right] lads wanted blood at that time.

‘I believe to this day the reason why they didn’t attack me was because I had a leading role within the movement and then two people jumped into me and said “Nigel’s right, he’s not the enemy because of his colour, the British government is the enemy and those are the ones we should be attacking”.

‘And then we just pulled down a black cab and swiftly moved the black family into there and gave the guy the money and said “Drive them wherever they need but get them out of here right now”. That for me was when I just thought, “I’m out of here I’ve got to go”.’

Nigel, who had also been involved with ultra-right wing group Combat 18, revealed he planned for years to escape the organisations, raising enough money to leave the city before cutting off all contacts.

‘I eventually came back to Birmingham and then set about then trying to make amends for my past,’ he said. ‘I applied for lots of council jobs. It was all around community work and through that I’ve met amazing people.’

Since then, Nigel has set up an organisation called Exit UK, which helps people to get out of far-right groups or to prevent them from joining in the first place.

The seventh episode of Changes with Annie Macmanus is out today and available on Spotify.

thegirlsunhttps://thegirlsun.com
Previous articleAdults CAN get the inflammation condition linked to COVID-19 seen in kids
Next articleJasmine Yarbrough shares sweet photos of daughter Harper and reveals her favourite baby products

Martin Lewis calls for an end to seasonal clock move

Martin Lewis has split opinion after calling for an end to the seasonal clock move in the hopes of 'cheering everyone up' with...
Read more
Feamil

Jill Duggar is speaking out more about the rift between her and her parents, revealing that it started when she and Derick decided...
Read more
Feamil

Man on £150,000-a-year who refused to financially support his child for...
Read more
Feamil

Sweden holidays: Astonishing hotel that sits on the rocky island of Hamneskar

For those who like their hotel locations on the windswept and remote side, this one, which sits on a craggy island off the...
Read more

The "long-lost" place of worship was discovered in Gloucester's city centre. Remains of the 13th century Carmelite friary were found nestled beneath a...
Read more

They recently sparked speculation they had taken their relationship to the next level after just five months of dating.And Katie Price did little...
Read more
Sport

Newcastle fans rage at Mike Ashley as they claim owner has...
Read more