Dwyane Wade is a sucker for love.

Earlier this week the NBA player was taking a scenic stroll in Santa Barbara, when he accidentally photobombed a couple who was mid-proposal.

Taken back by the beautiful event, Dwyane, 38, was pictured with his hand over his heart beaming with joy as the moment was captured on camera. 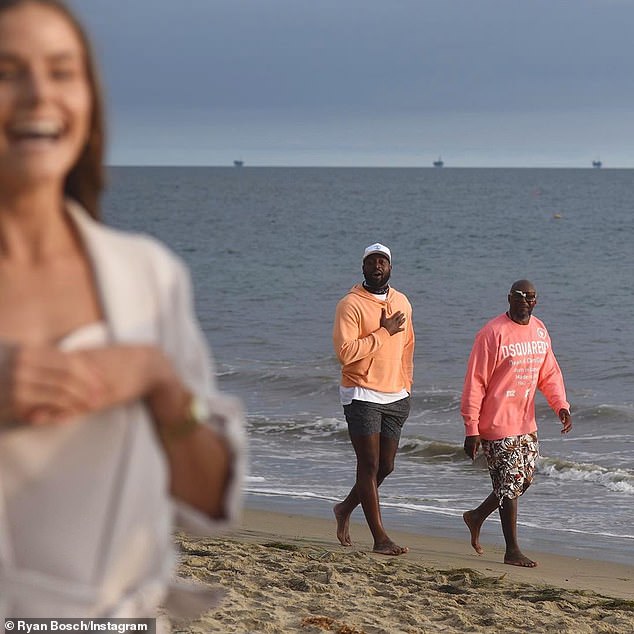 Epic photobomb: Dwyane Wade, 38, was in the right place at the right time as he accidentally photobombed a couple mid-proposal, while walking on the beach in Santa Barbara. The moment was captured by the couple’s photographer as Wade congratulated them

The couple’s photographer snapped the priceless moment that Wade walked by in the background.

Wearing an orange sweatshirt and a white baseball cap, the three-time NBA champion reacted in the sweetest way.

With his hand on his chest and his mouth open, Dwyane eclipsed the right side of the  photos, which were posted on Instagram by the groom-to-be. 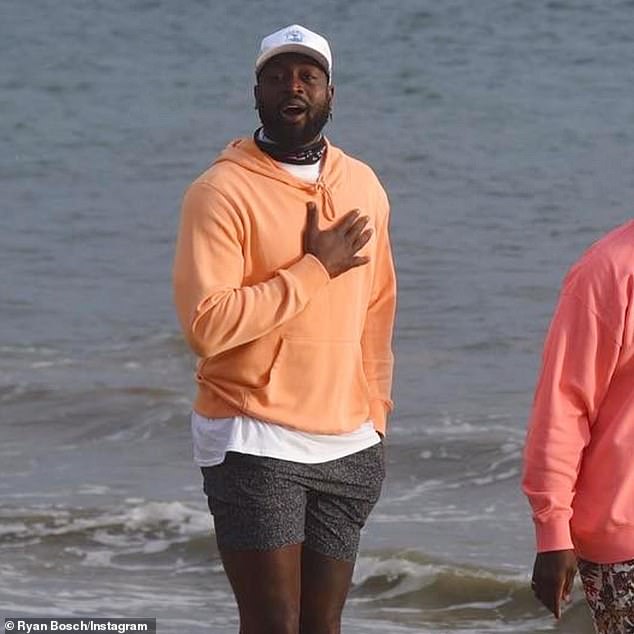 Priceless: His genuine reaction to the couple’s happiness rocked the internet as he eclipsed the background of their photos

A tough guy on the court, Wade’s soft spot for romance was apparent as he reacted in the most genuine of ways.

He walked up to the couple shortly thereafter congratulating them as he posed for an epic photo.

The Los Angeles based couple, were shocked by the moment as the incident elevated an already incredible day. 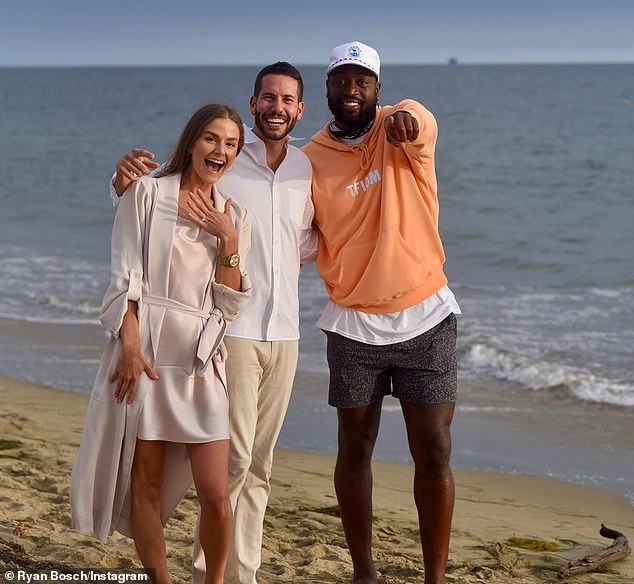 Happiness: Wade posed with the couple after he photobombed the pair with the most genuine reaction

Later, Wade posted about the incident on social media as he shared in the couple’s happiness.

‘It was so dope to witness you guys love!,’ he wrote.

He later slid into the DMs as he said, ‘I need y’all marriage to work. It’s now on my conscious haha.’

Wade notoriously played for the Miami Heat for the majority of his 16 year NBA career. 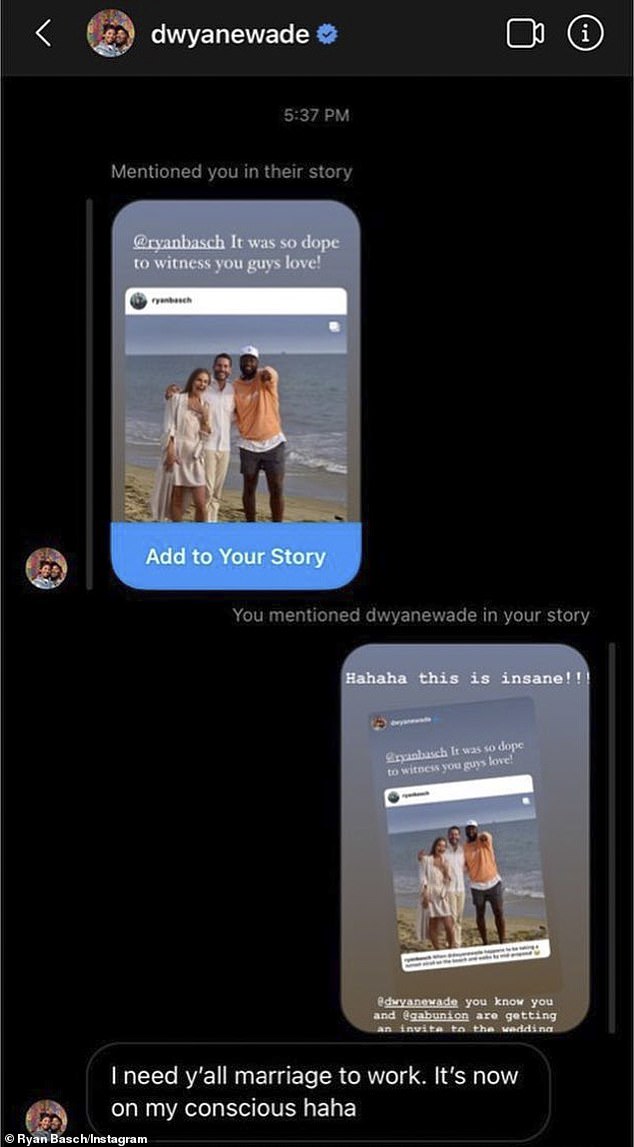 Sliding in: The NBA champion could not contain his happiness as he slid into the groom-to-be’s DMs as he wrote ‘I need y’all marriage to work’

The current team, which ultimately lost to the Los Angeles Lakers in the Championships last week, was praised by the former player over the summer.

‘What I love about the way the Miami Heat are getting three’s is ball movement which is very important when they don’t have Jimmy Butler,’ he said.

Wade was not allowed to take enough three-point shots under the guidance of his coach Erik Spoelstra, which he criticized him for.

‘I love him to death, but I feel like you held me back now coach. You’re allowing everybody to shoot all these threes that you did not allow me to shoot,’ he said. 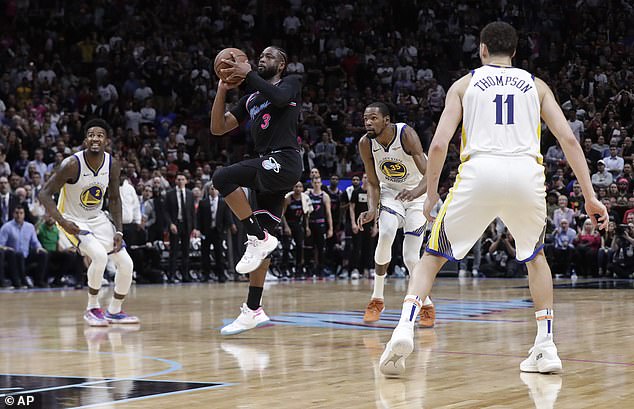 Bring the heat: Wade played for the Miami Heat for the majority of his 16 year NBA career. The former player, praised the current team over the summer in an on camera interview; seen in February

Great British Bake Off: Linda Rayfield is voted off after her...
Read more
Tv & Show

Amber Riley has claimed a Donald Trump supporter 'spat' on her car.The former Glee star was trying to park her car when an...
Read more
Tv & Show

Katie Price gushed beau Carl Woods has been so 'loving' and 'affectionate' during their trip to the Maldives on Tuesday.The former glamour model,...
Read more
Tv & Show

'It's the highlight of my week!' Bake Off fans go wild...
Read more

The expert suggested the pair had similar body language which showed they were in sync during the appearance."Harry and Meghan’s body poses looked...
Read more

Coronavirus Manchester: How life will change under Tier 3 lockdown

The CEO of a Florida medical technology start-up is accused of blowing more than $400,000 in company funds on escorts, strip clubs and...
Read more

Great British Bake Off: Linda Rayfield is voted off after her...
Read more

Shaun Bailey's campaign has today served up their own version of the Great British Bake Off slamming Sadiq Khan for having a 'half-baked'...
Read more

Back pain is a common condition that affects most people at some point in their lifetime, according to the NHS.It could be caused...
Read more
Life & Style

Private parking firms have called for the return of the draconian punishment just eight years after the act was outlawed. The AA has...
Read more
Life & Style

Putting on several layers such as a big coat and thick jumper could make it more difficult for road users to move which...
Read more