Douglas Luiz bursts out laughing when he recalls the moment he briefly stopped being a footballer and turned into a rock star.

The Brazilian midfielder had just equalised for Aston Villa in a tense relegation clash against Watford in January and celebrated by launching himself into the Holte End in the style of Damon Albarn at the height of Blur’s fame — nearly injuring himself in the process.

Perhaps wisely, Luiz decided not to mention his near-miss to his manager, Dean Smith, who has never known until now how close he came to losing a key player for a significant period. 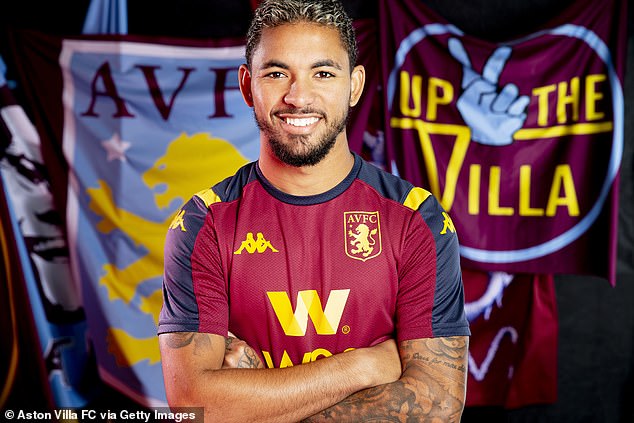 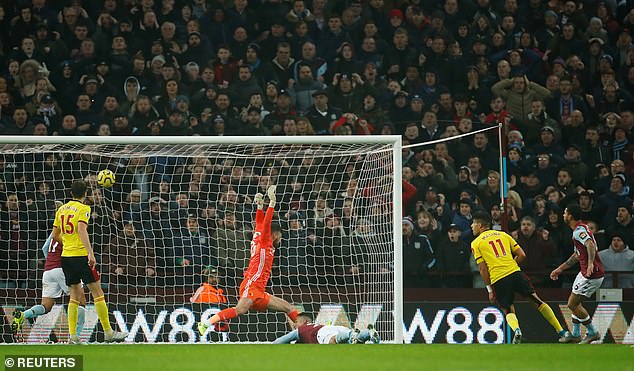 ‘When I dived into the crowd I managed to hit my back on one of the metal barriers,’ Luiz remembers. ‘At first, when emotions were running high, I didn’t feel any pain, but when we came off the pitch at full time I really started to notice it.

‘I didn’t tell the manager, though. I kept that one to myself. It was probably my most emotional moment at the club — a crazy incident but crazy in a really good and satisfying way.’

Luiz would have done himself considerably more damage had he repeated the trick during one of the most memorable matches in Villa’s recent history — the 7-2 win over Liverpool on October 4, played before rows of empty seats at Villa Park.

Luckily, the 22-year-old was happy to settle for dominating midfield as Smith’s side embarrassed the champions in a display that was unrecognisable from many of those Villa produced last season, when they avoided relegation by a single point. 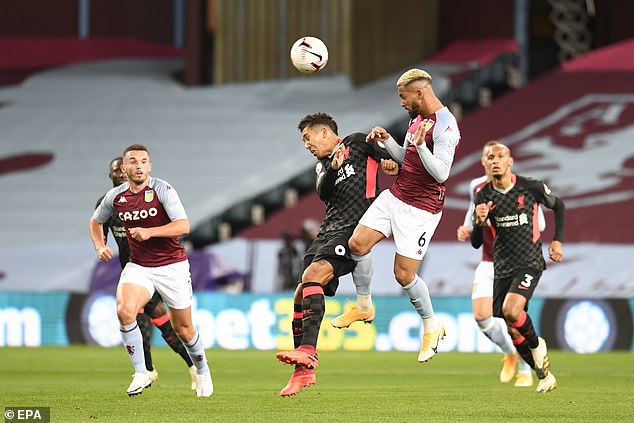 Luiz has been at the heart of that improvement. Regularly the best player in training despite a slow start to his career in the West Midlands, since lockdown he has transferred those performances from the practice pitches at Bodymoor Heath to those of the Premier League.

Though his English remains a work in progress — this interview is conducted with the help of a translator — Luiz is starting to become fluent in the language of English football.

‘Lockdown served as a period of reflection for us to look back at our mistakes,’ he said. ‘The period just before that was a difficult time for us. We were lost. So the mental aspect of being able to reflect on our errors was very important.

‘When I arrived at the club I had only a couple of days before I started playing, so I didn’t have time to train regularly with the group or adapt to the players and find out what they were about. 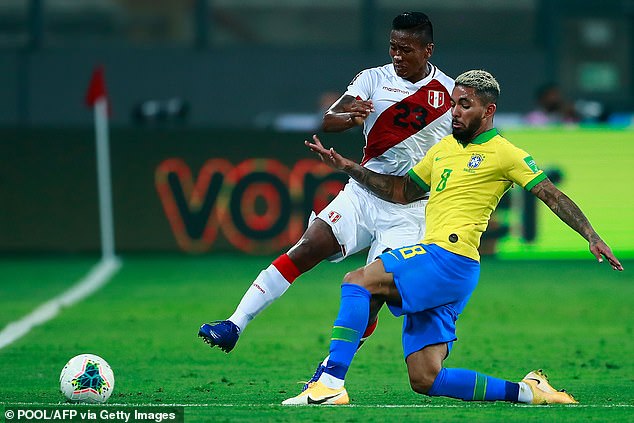 In addition to featuring for Brazil, Luiz’s progress is likely to see him earn a new Villa contract

‘In lockdown I was able to do a lot of fitness work and that’s what allowed me to get to the level I’m at now. I’m very happy that I helped Villa stay in the Premier League and now it’s time to prove we deserve to stay here. The Liverpool game was a wonderful night — a great team performance. I think everyone played really well.

‘Last season we were unlucky at times against some of the top teams, so it was a nice feeling to beat one of them. Liverpool are an outstanding team, so it was a magnificent achievement for us.’

A new contract is surely imminent for Luiz, who moved to Villa from Manchester City 14 months ago. City have a buy-back arrangement which is likely to be removed as part of any new deal.

Luiz’s rapid progress has been noted in his own country, too, where he hopes to follow a fine modern tradition of holding midfielders which includes World Cup-winning captain Dunga, Fabio Capello favourite Emerson Ferreira and Arsenal ‘Invincible’ Gilberto Silva. 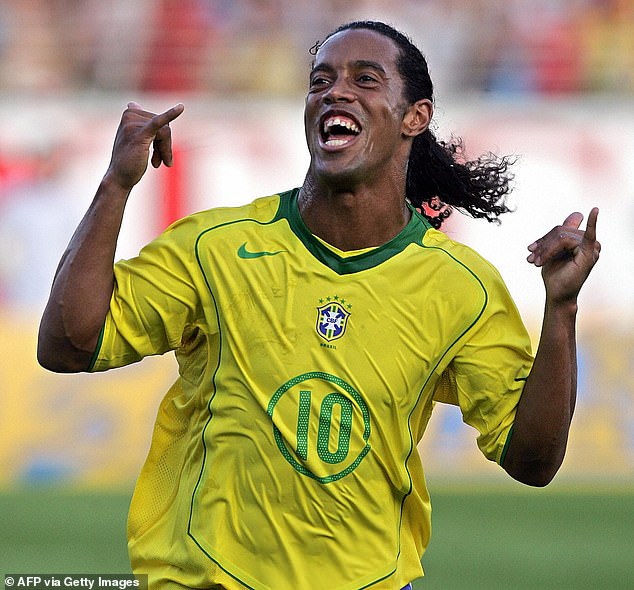 Even though he plays in a different position, Luiz loved to watch fellow Brazilian Ronaldinho

He was Brazil’s first choice in the role for their recent World Cup qualifiers against Bolivia and Peru and played the full 90 minutes in those victories.

Growing up, however, Luiz was drawn to a player who operates far closer to the opponent’s goal, and whose alegria (meaning joy or happiness in Portuguese) on the pitch reminds him of Villa skipper Jack Grealish.

‘I play a bit differently to the player I loved to watch — Ronaldinho,’ he says. ‘I watched him when he was at Barcelona and in the national team, and it was the way he played the game, his essence, the joy he brought to the stage. He was my idol. 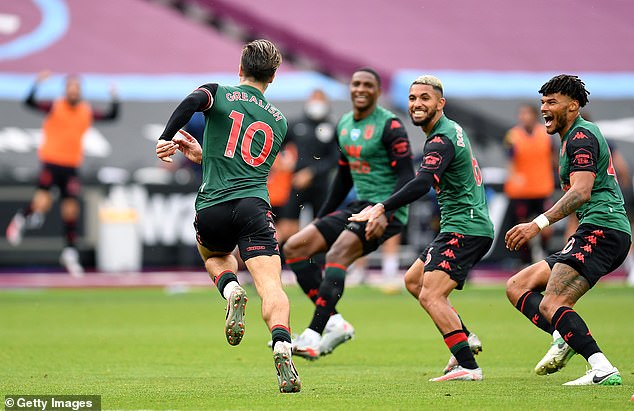 ‘Jack certainly has elements of Brazilian football to his game. He likes to show off his skills, he is joyful on the pitch, he is quick, he can dribble, so he is a very important player and he will continue to develop.

‘With Jack signing a new contract and players like Ross Barkley and Emiliano Martinez joining the club, we are clearly developing every season, getting better and bringing in international players.

‘Unfortunately I play in a different position to Ronaldinho and Jack, and in my role it’s hard to be joyful all the time.

‘You have to be more serious but I do try to let that ray of sunshine come on to the pitch.’

thegirlsunhttps://thegirlsun.com
Previous articlePregnant Bindi Irwin shares a sweet tribute to her mother Terri
Next articleHunter Biden emails claims he was asked to 'close down any pursuits against the head of the firm'

Princess Diana style: How to recreate the Princess’ iconic looks

Princess Diana tragically died in a car accident in 1997. Whilst she was alive, she was known for her stylish dresses and suits...
Read more

During a stellar career, she has picked up a Golden Globe and any number of bouquets,...
Read more

SAS Australia star Shannan Ponton has been spotted in public for the first time since actor Firass Dirani called him a 'redneck' and...
Read more

Millie Mackintosh was every inch the devoted mother as she breastfed daughter Sienna in a sweet throwback snap shared on Thursday.The former MIC...
Read more