Curses, ghosts, aliens – even Ozzy Osbourne gets spooked as he explores them in a new series


Known as the Prince of Darkness, Ozzy Osbourne has long been one of rock music’s scarier stars. Yet many things terrify him – clowns, doctors and his wife Sharon’s anger to name three… and most recently a doll called Robert.

It’s a child’s toy that’s been scaring people for more than a century and inspired the Chucky horror films. Ozzy is convinced that after meeting Robert in a museum with his son Jack, his life has been cursed.

‘That thing is bad luck,’ says Black Sabbath singer Ozzy, 71. ‘The guy who runs the museum told us people buy the replica dolls of Robert then send them back because things start to go bad.’ 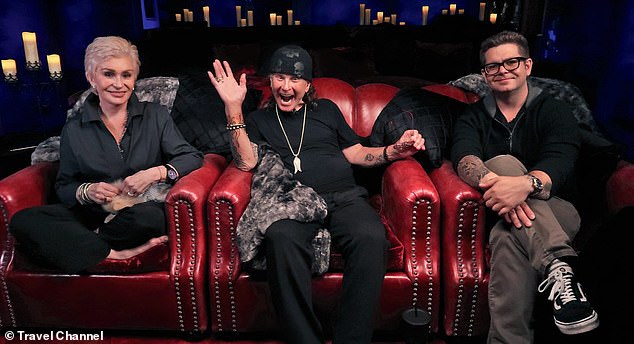 Ozzy and Jack, who’s carved out his own niche hosting programmes about the paranormal, met Robert at the Fort East Martello Museum in Florida three years ago on a road trip TV show.

The original doll is 100cm tall and stuffed with wood shavings. It was given to artist Robert Eugene Otto, known as Gene, as a child in 1906 by a maid who practised black magic and voodoo, according to one story.

Gene told his parents the doll had mutilated his other toys and would knock furniture over in the night. When Gene died and his home was bought by a new family, the doll was discovered and put in the bedroom of a 10-year-old girl.

She began to suffer night terrors and said her other dolls were destroyed, and even that Robert tried to strangle her. Neighbours said they saw the doll moving in the windows. 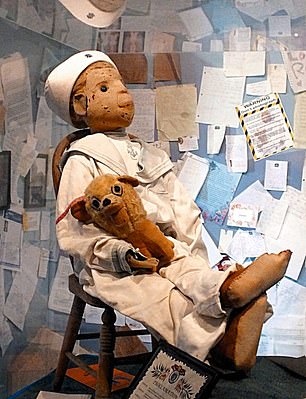 Ozzy who recently revealed he has been diagnosed with Parkinson’s disease, is convinced his life has been cursed since he met Robert (pictured) at the Fort East Martello Museum in Florida

The doll has been at the museum since 1994, where cameras and electronic devices have malfunctioned in its presence.

‘It started as a joke,’ says Jack, 34. ‘But then it took on a life of its own. You have to be polite with Robert – ask if you can take a picture with him, and if you disrespect him he’ll curse you. We got our own replica Robert, but Dad was not a fan and he blew it up.’

In a later episode of the same series, Ozzy rigged the doll up to explosives on a visit to a mine. ‘The whole thing freaked him out and he thinks there’s something in the curse. I’m not so sure, but I did get divorced soon afterwards.’

Although Ozzy had already had several brushes with death before meeting Robert – from drug addiction to a horror fall from a quad bike – after the encounter things turned very bad.

First he was hospitalised with pneumonia, then he had a major fall at his LA home which dislodged the metal rods in his spine that had been put in after the quad bike accident in 2003.

He needed three operations and still suffers crippling back pain. Then in January this year he revealed that he had been diagnosed with Parkinson’s disease.

The curse of Robert is one of the spooky stories in new eight-part series The Osbournes Want To Believe, which sees Jack and his parents explore supernatural occurrences.

It’s their first series together since their much-loved fly-on-the-wall show The Osbournes ended in 2005.

Filmed in the cinema room at the Osbournes’ LA mansion, it came about as TV executives frantically wondered how to fill their schedules during the pandemic and looks at everything from poltergeists to alien sightings. 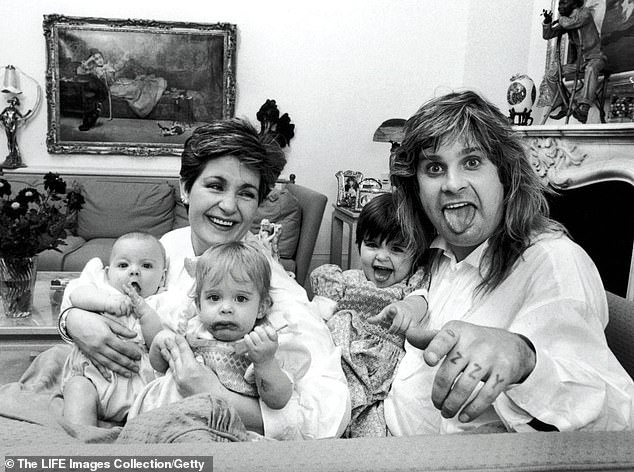 Sharon, 68, admits she’s haunted by the curse of Tutankhamun because so many things have happened to the people involved in his excavation. Pictured: Sharon and Ozzy with Jack (left), Kelly (centre) and Aimee (right) – who doesn’t appear in the family shows – in 1986

All of this is interesting enough, but the interaction between the three Osbournes proves ever fascinating.

Ozzy swears more than ever and both he and Jack say some mad stuff, but even Jack was left open-mouthed when his mother Sharon started talking about pirates’ nefarious activities with dolphins.

Jack is the convert of the three, convinced he’s had ghostly experiences, while Ozzy is open-minded. He remembers a schoolfriend who was haunted by a poltergeist, but he’s less convinced by people who say they’ve seen aliens.

‘They could have just been smoking dope,’ he muses.

Sharon, 68, is the most cynical, yet even she believes in curses. ‘I don’t know about Robert, but the Tutankhamun curse haunts me,’ she says.

‘So many things happened to the people that had anything to do with the excavation of the mummy. 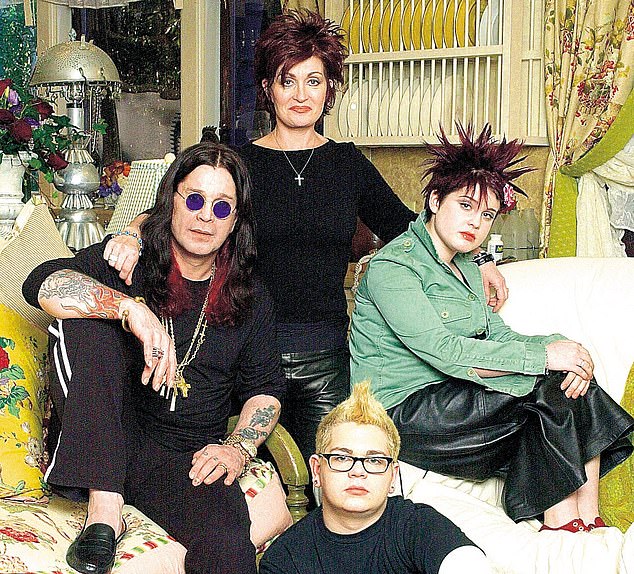 Jack revealed he believes in ghosts and is convinced that their family home in Buckinghamshire is haunted. Pictured: Ozzy, Sharon, Kelly and Jack on MTV’s The Osbournes

‘I believe in certain energies that stick to things – some houses have a good energy and others feel bad. I’m not sure how you scientifically quantify a curse, but I think the Kennedy family is cursed.

‘They’ve had so many terrible things happen to so many of them, in every generation. I don’t think you can put that down to bad luck. Something along the line must have happened, like when you sell your soul to the devil.’

Jack is less certain. ‘We all have times where you keep getting kicked, but I’ve never felt it was a curse. I don’t think the universe takes sides.’

But he does believe in ghosts, and thinks the family home in Buckinghamshire is haunted. ‘I hate being alone there,’ says Jack.

‘When I was a kid I was at home with just my sister and we heard someone walking, then running, on the floor above us. We heard someone dragging their hands on the cupboards that lined the walls.

‘It also felt really cold. We were terrified – we felt this thing was coming towards us – and wondered if we should jump out the window, then it stopped. 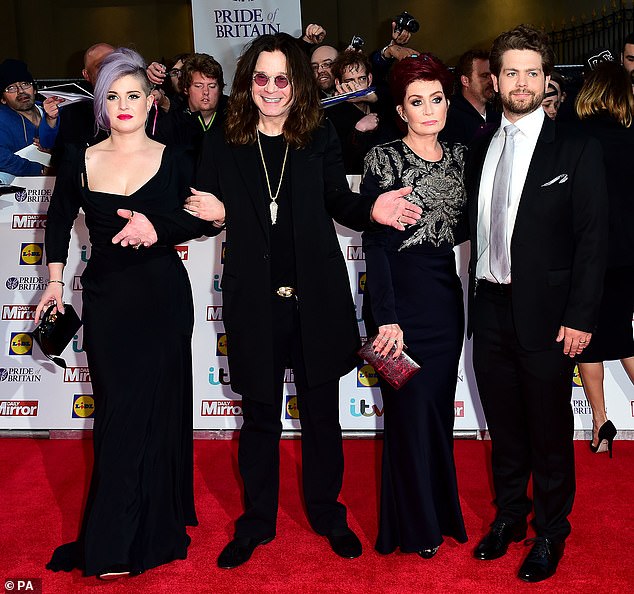 ‘My friend stays in the house when we’re not there, and one night his baby woke up so he went to calm it. He heard someone singing but there was no one there. He’s a cynical bloke but he was really flummoxed.’

Sharon doesn’t believe the house is haunted: ‘It’s an old house with dark corners, so I can see why it’s daunting.’

One of Jack’s scariest experiences was filming at a former prison, the Eastern State Penitentiary, for one of his TV shows.

‘We were in the death row wing and there was so much bad energy that everything in my body was screaming, “Get out!” Then suddenly this huge industrial light started swinging violently above me. It was absolutely terrifying.’

The new series, which airs in the run up to Halloween, has proved so much fun that it inevitably brings up questions about a revival of the original Osbournes show.

Sharon admits she would consider it.

‘When you finish a series you say you will never do that again. But you never know. You say no to things, then the world changes and 20 years later, who knows? Never say never.’

The Osbournes Want To Believe, Monday, 9pm, Really, on Freeview.

thegirlsunhttps://thegirlsun.com
Previous articleType 1 diabetes could develop when babies are still in the WOMB
Next articleDebra Messing dons face mask as she campaigns for Joe Biden and Kamala Harris in Pennsylvania

Martin Lewis calls for an end to seasonal clock move

Martin Lewis has split opinion after calling for an end to the seasonal clock move in the hopes of 'cheering everyone up' with...
Read more
Feamil

Jill Duggar is speaking out more about the rift between her and her parents, revealing that it started when she and Derick decided...
Read more
Feamil

Man on £150,000-a-year who refused to financially support his child for...
Read more

Purdue Pharma, the company that makes OxyContin, will plead guilty to three federal criminal charges as part of a settlement of more than...
Read more

Jack Wilshere steps in to defend Mesut Ozil after he was...
Read more

She has thrown her support behind her friend John Leslie this week, saying she 'could not be happier' as he was found not guilty...
Read more

Testosterone levels were measured and there was a significant decrease (almost 75 percent) after 20 weeks of a low-zinc diet.The study also examined...
Read more

Molly-Mae Hague and Tommy Fury enjoyed a day out with their close pal Maura Higgins in Cheshire on Sunday.The trio, who found fame...
Read more
News