By Raven Saunt For Mailonline

A Berlin court has suspended an order for bars and restaurants to close from 11pm to 6am after finding that ‘it was not apparent’ such a measure could help fight coronavirus.

Ruling on a case brought by 11 restaurant owners, the administrative court noted that new infections in Germany currently stem from private gatherings of family and friends, at community facilities, meat-processing plants, religious gatherings or in connection with travel.

Closing food and drink establishments was therefore a ‘disproportionate encroachment on the freedom’ of the industry, the court ruled.

It comes after Angela Merkel warned Germany was heading for ‘disaster’ after regional leaders refused to sign off on her tough new coronavirus measures amid surging cases in Europe.

The German Chancellor lost her temper with state leaders at late-night talks on Wednesday, telling them: ‘What we’ve agreed is not enough to ward off disaster.’ 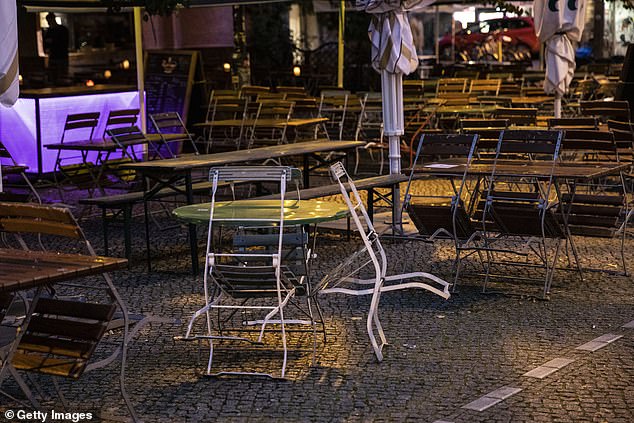 A Berlin court has suspended an order for bars and restaurants to close from 11pm to 6am after finding that ‘it was not apparent’ such a measure could help fight coronavirus. Pictured: Empty restaurant in Berlin last night

Germany recorded the highest ever increase in daily cases for a second day running as it saw 7,334 new infections on Friday.

It also reported 33 new deaths which is triple the figure recorded a week ago – despite still being less than its European neighbours.

thegirlsunhttps://thegirlsun.com
Previous articleAway co-founder Steph Korey finally steps down as CEO just 10 months after returning to the start up
Next articleGreat British boltholes: A review of The Bull Inn, Totnes, Devon

Great British Bake Off: Linda Rayfield is voted off after her...
Read more
News

NASA's OSIRIS-REx spacecraft is getting ready to reach out its robotic arm and collect a sample from the asteroid Bennu's surface on Tuesday...
Read more

Donald Trump was first elected as the US President four years ago and is now battling to win a second term against rival...
Read more

Organizers of the Black Lives Matter movement are suing Los Angeles District Attorney Jackie Lacey and her husband in connection to an incident...
Read more

Karl Stefanovic and his wife Jasmine Yarbrough are every inch the...
Read more

The opening line of Rebecca is among the most evocative in the whole of English fiction: 'Last night I dreamt I went to...
Read more
Sport

Man, 39, has a 'Kinder-egg sized' cyst on his forehead removed in The Bad Skin Clinic

A man who hasn't gone outside without a hat on for two years due to a 'Kinder-egg-sized' cyst on his forehead has it...
Read more