Coco Austin was clearly distraught while speaking about her father’s battle with COVID-19 in an interview with Page Six published Thursday.

The 41-year-old model said her ‘family was falling apart’ in the emotional interview, which she gave after her father, Steve Austin, was transferred to the intensive care ward.

‘I just want him to pull through,’ she said Wednesday night. 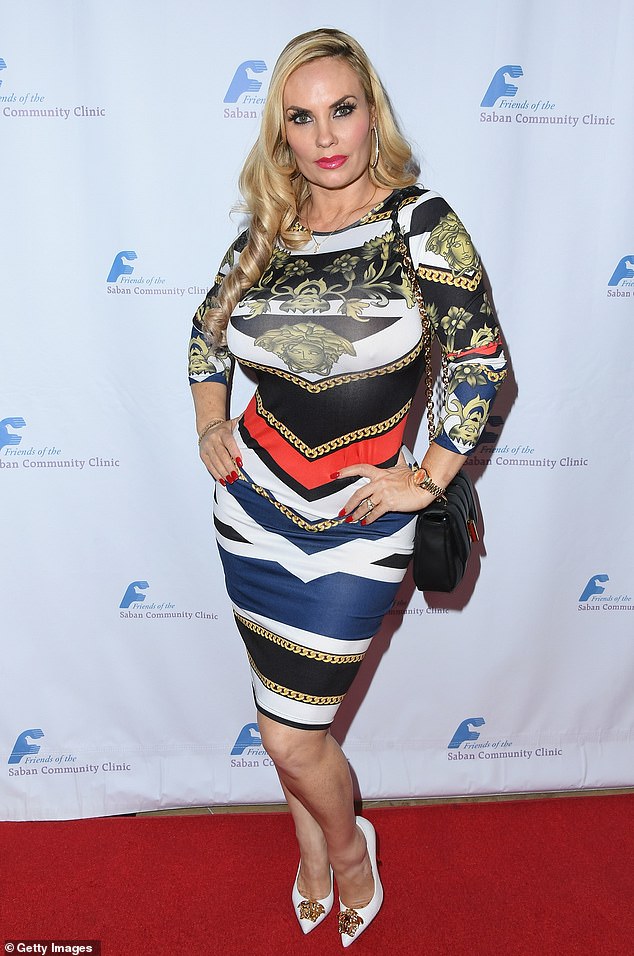 Difficult time: Coco Austin, 41, sounded distraught as she spoke about her father’s time in the ICU in Arizona while battling COVID-19 in an interview with Page Six from Wednesday night; shown in 2018

‘I’ve been sending as much love as I can but there’s only so much I can do from a distance,’ she continued.

‘I want to be in the room with him right now and hold his hands, and just let him know that his family loves him, to push through, and this is too early for him to go.’

Coco, who’s married to the actor and rapper Ice-T, previously revealed that her father was receiving oxygen at Arrowhead Hospital in Arizona.

The Southwestern state recorded a new daily high of 4,753 positive cases on Wednesday, according to The New York Times, exceeding the number of new coronavirus cases for the entirety of Europe. 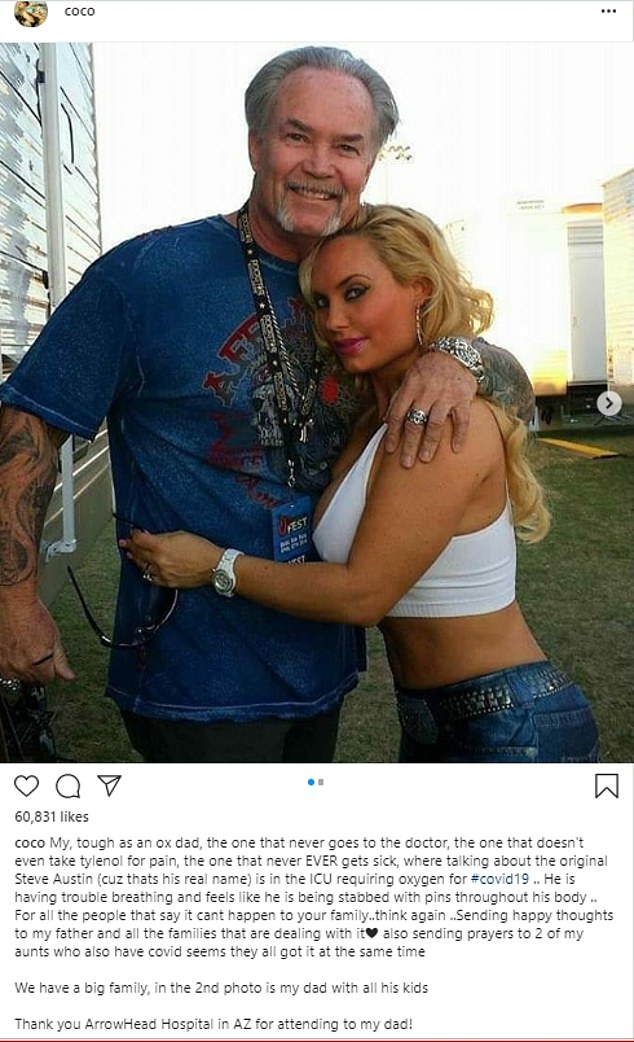 Missing him: ‘I want to be in the room with him right now and hold his hands, and just let him know that his family loves him, to push through, and this is too early for him to go,’ she said of her father, who’s currently on oxygen

Coco revealed that her father may need to be put on a ventilator after he developed pneumonia in both lungs.

‘He’s at the point where he can’t even talk,’ she explained. ‘He can’t even say a word. For him to say “no” or “yes” is so hard that I have to use texting now, and today he doesn’t even want to text anymore. He’s just getting so frustrated that he’s in this position that he doesn’t want to get on the phone.’

She added that her dad had been put on a course of steroids to help him ‘feel good,’ though she sounded pessimistic about his prospects.

‘It’s not looking good. I wish I had better results today,’ she said. 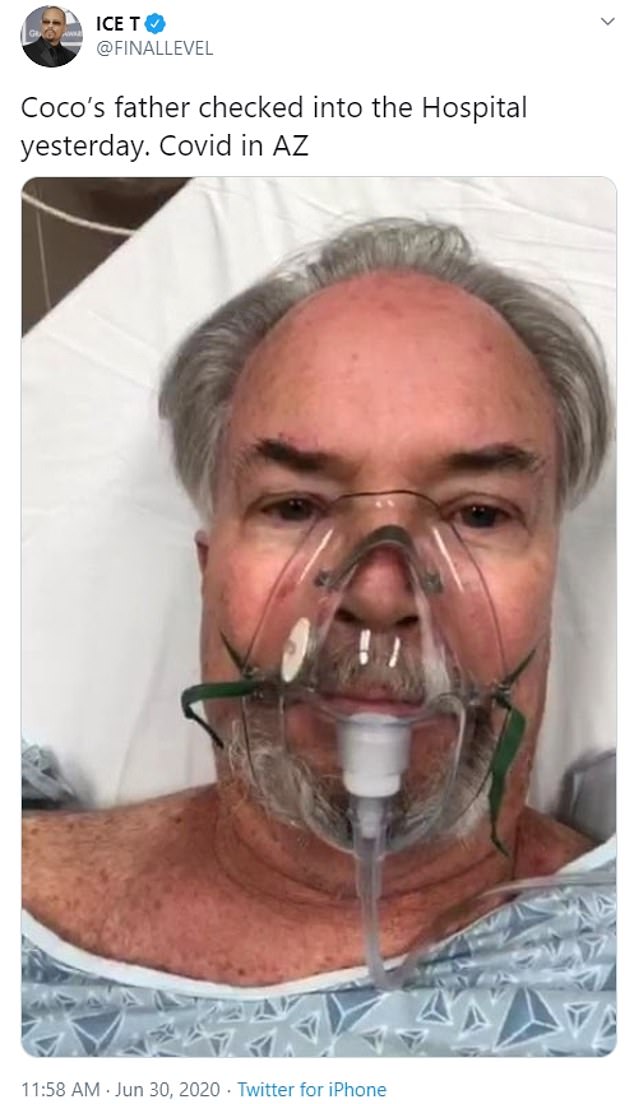 Cut off: The reality star said her father couldn’t speak and had to rely on texting, but he’s ‘just getting so frustrated that he’s in this position that he doesn’t want to get on the phone’

The Ice Loves Coco star revealed that she last saw Steve when she and other family members met up.

‘He was feeling lethargic,’ she remembered. ‘My dad is very much a chattybox. He’s very much a conversationalist and he wasn’t talking that day much, so there was something up that we knew.’

Soon, he began to suffer from shortness of breath and felt like he was ‘being stabbed throughout his body’ with pins, but it wasn’t until nine days later that he sought out medical care, which she called a mistake.

‘Knowing what he’s gone through, he let this disease or virus sit in him for nine days before doing anything,’ she said. ‘That’s basically what they say is too late.’ 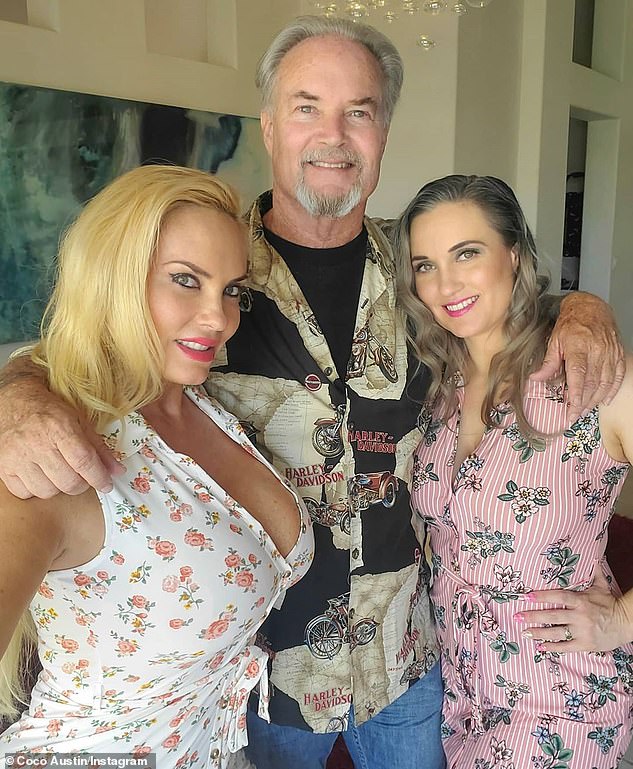 Dangerous gathering: Coco last saw Steve on Father’s Day (pictured) when he was feeling lethargic and starting to experience symptoms

The reality star worried her father may not have been vigilant about wearing masks when going out.

‘I know my family, in this house, we are very good,’ she said. ‘As a matter of fact, we’ve been having fun with the face masks. I’m coordinating it with our outfits and making it something to be happy about instead of being sad about.’

But she worried that her father wasn’t ‘a good face mask wearer.’

‘I think that’s why he’s in the position he is in right now,’ she said.

Two of her aunts also contracted COVID-19, and one had to go to the hospital so far, though it wasn’t clear how any of her family members were exposed.

‘It’s like, “Oh my God, like, my family is falling apart,”‘ she said. ‘We’re here thinking we came to Arizona to get away from the craziness in New York and New Jersey, and I feel like we now swallowed it up in the spike that just happened here.’

Coco said she and her family felt like ‘aliens from outer space’ because they were among the few people at a local store who wore masks, despite the swelling coronavirus numbers. 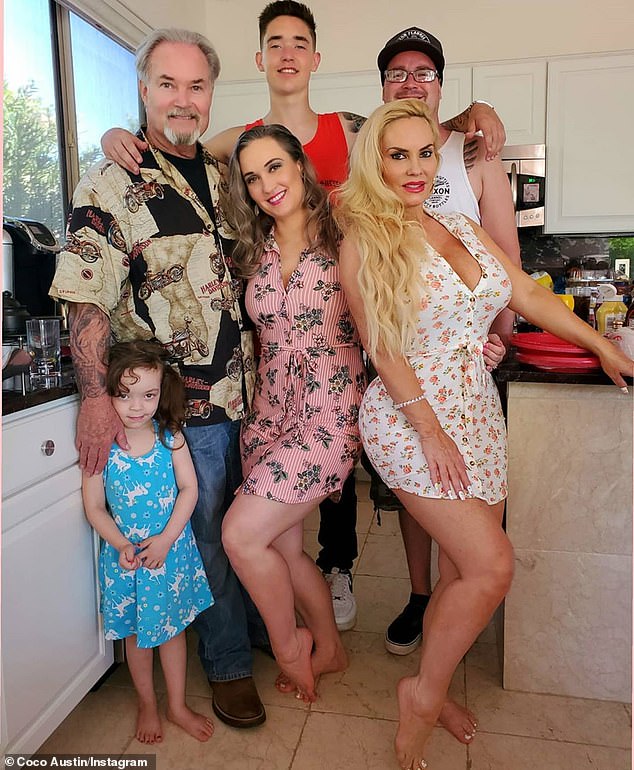 Risky: Coco worried that her father wasn’t ‘a good face mask wearer.’ She said he may need to go on a ventilator due to pneumonia in both his lungs

She, Ice-T and their four-year-old daughter Chanel have been monitoring themselves for any symptoms, though so far no new family members have fallen ill.

‘It’s hard to get a test out here when you don’t have symptoms, but I do want to get an antibodies [test],’ she said. ‘We’ve been talking about where to go to get that, but it’s so hard.’

Coco’s parting words were a warning to anyone not worried about contracting the coronavirus.

‘The most healthy person in this family is about to go on a ventilator, they’re talking about that, which is really hard because I’m pretty much the next of kin. I have a really big family and they put it in my hands to make these decisions, so it’s been really hard to have to even talk about.’

She urged everyone to be vigilant about safety measure when they have to go out. 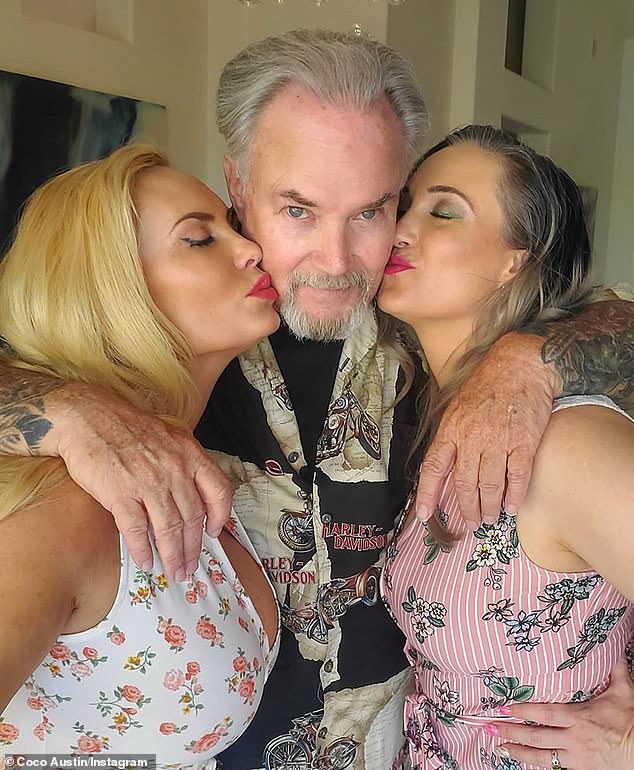 Tough time: ‘The most healthy person in this family is about to go on a ventilator, they’re talking about that, which is really hard because I’m pretty much the next of kin,’ she said