CHRISTOPHER STEVENS: Taskmaster dumps Dave for C4…. and – hooray – is as silly as ever!


CHRISTOPHER STEVENS reviews last night’s TV: Taskmaster dumps Dave for C4…. and – hooray – is as silly as ever!

By Christopher Stevens for the Daily Mail

Telly is a brutal business. A show that slips in the ratings can be cancelled on the spot — but a hit series doesn’t mean an end to all the insecurities.

For channel chiefs, it just brings sleepless nights for different reasons. What if your fan-favourite elopes to a rival broadcaster?

Every comedian launching a show on the low-budget Dave channel in recent years has had one aim — to be as big as Taskmaster. 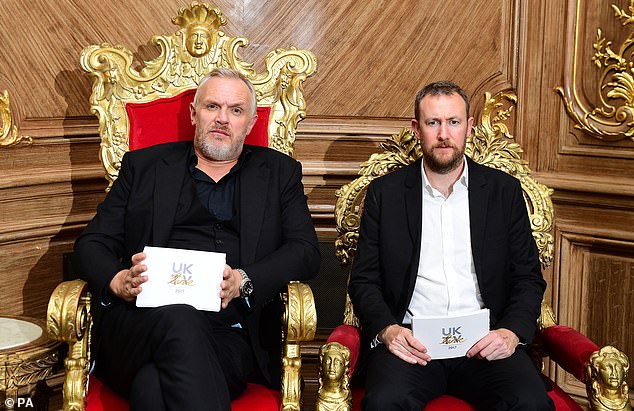 After nine increasingly successful series, it was the jewel in Dave’s plastic crown. It gave us Richard Osman throwing a shopping trolley in a stream, Noel Fielding disguising himself as a banana and Sally Phillips playing basketball with Wellies on her hands.

And then Dave’s flagship sailed away. Dave got dumped. Taskmaster (C4) has gone mainstream.

Playing the imperious titular ‘taskmaster’ and his fawning courtier, Greg and Alex make a strong double act. Though apparently they have little time for each other in real life, on screen they have a natural rhythm.

‘Little Alex Horne’ (who is actually 6ft 2in) makes an ingratiating remark. ‘Lord Greg Davies’ (an enormous 6ft 8in) pauses just long enough to convey his contempt, and carries on. It’s a one-note joke, but it’s unfailingly funny.

As contestant Richard Herring pointed out, the core of the format is not how well the players perform the tasks, nor whether they make complete fools of themselves. The fascination is in seeing celebrities desperate for approval, even when they know it’s a set-up.

Herring botched a game that involved guiding eggs, without throwing them, into a frying pan 30ft away. Even when his eggs were splattered over the floor, he kept scraping them up. ‘You looked 12 years old, a determined little boy trying to prove himself to daddy,’ mocked Davies.

Budget buster of the night:

‘Isn’t that what this show is?’ retorted Herring. Every series seems to attract one player whose thinking is not so much lateral as certifiable, and one who proves unexpectedly competent.

The lunatic this time appears to be YouTube personality Mawaan Rizwan, who wondered if an egg would fly if he filled it with helium (it didn’t).

And the dab hand was Daisy May Cooper, best known for her sitcom This Country with her brother Charlie.

She’s heavily pregnant, and a natural giggler. Whether she reaches the end of the series without laughing herself into labour, we’ll have to see.

For some reason, much of the background music this time echoed Ennio Morricone’s soundtrack for Spaghetti Westerns.

The same mood was evoked in The Trump Show (BBC2), a documentary about the past four years in the White House.

When the President met North Korean dictator Kim Jong-un, it was to the eerie strains of The Good, The Bad And The Ugly. But this three-part series is not just a sneer. It asks whether the media has misjudged The Donald, dismissing him as a showman and failing to grasp what a natural demagogue he is.

‘People underestimate him at their peril,’ said BBC correspondent Jon Sopel. ‘He understands politics as entertainment.’

The interviewees, mostly White House staff sacked by Trump, relayed plenty of that entertainment. The outrageousness of the anecdotes was gripping.

On the day of his inauguration, said one, Trump wanted to swear his oath, not on the Bible but on his autobiography, The Art Of The Deal.

And why not? It’s obviously sacred to him.

thegirlsunhttps://thegirlsun.com
Previous articleNew quiz reveals your sleep persona and provides expert tips on how to improve your slumber
Next articleReal Madrid 'in pole position' to sign Kylian Mbappe next summer

Vogue Williams keeps out the chill as she bundles up in...
Read more
Tv & Show

No stranger to madcap antics at her Hollywood home, Kate Beckinsale's latest involves her dressed as a giant fruit.The actress, 47, posted a...
Read more
Tv & Show

They have been sunning themselves in the breathtaking surroundings of Tulum in recent days during their mid-lockdown business trip. And Delilah Belle Hamlin and...
Read more

Prince Harry has urged people to be more 'like raindrops' in the fight against climate change, in an impassioned speech to mark the launch...
Read more

Suki Waterhouse looks relaxed in a quilted jacket and joggers as...
Read more

JONATHAN McEVOY: F1 is gripped by the mystery of how Hamilton contracted Covid

How did the germ-freak Lewis Hamilton contract Covid?That is the question gripping the Formula One contingent away in Bahrain – with Mercedes super-sensitive...
Read more

This £3.48 BANANA mask from Garnier is all you need if...
Read more

The dexterity to use both a round brush and a hairdryer at the same time is a skill saved only for hairdressers and...
Read more

The latest and greatest in R&B/soul, hip-hop, and gospel music are set to be honored during the 2020 Soul Train Awards presented by BET on Sunday...
Read more
Tv & Show

'Wonder if this will be in The Crown?' Home and Away's...
Read more
Feamil

The Queen and the Duke and Duchess of Cambridge led the royal birthday tributes to Prince Charles today as he turned 72.The Royal...
Read more