The Girl Sun
Home U.S Chris Christie says he was 'wrong' not to wear a mask at...
U.S


Chris Christie has criticized the Trump administration for ‘not treating Americans as adults’ during the pandemic as he reveals he spent seven days in ICU battling COVID-19.

Earlier this month, Christie revealed that he was one of more than a dozen people, including several members of Trump’s inner circle, who tested positive for the virus.

They had all attended the Rose Garden ceremony where the President officially announced Judge Amy Coney Barrett as his SCOTUS nominee.

Christie said he believed that he was in a ‘safe zone’ because White House officials were tested for COVID-19 every day.

‘I was put in the third row, and what they told us was that everybody in the first three rows had been tested that day and tested negative,’ he told the New York Times. ‘I shouldn’t have relied on that.’

After testing positive, Christie admitted himself to Morristown Medical Center in New Jersey on October 7 here he was placed in the intensive care unit for seven days and was treated with a cocktail of drugs.

He now says that COVID-19 is ‘someting to take very seriously. The ramifications are wildly random and potentially deadly.’ 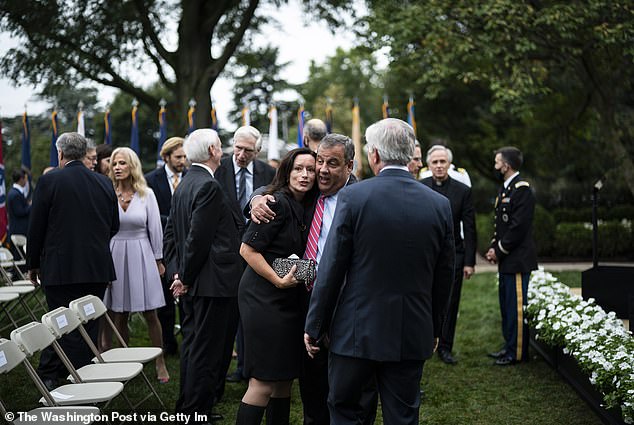 Chris Christie (center) hugs Maureen Ferguson (left), senior fellow at the Catholic Association, after President Donald J. Trump spoke with Judge Amy Coney Barrett during a ceremony to announce Barrett as his nominee to the Supreme Court in the Rose Garden at the White House 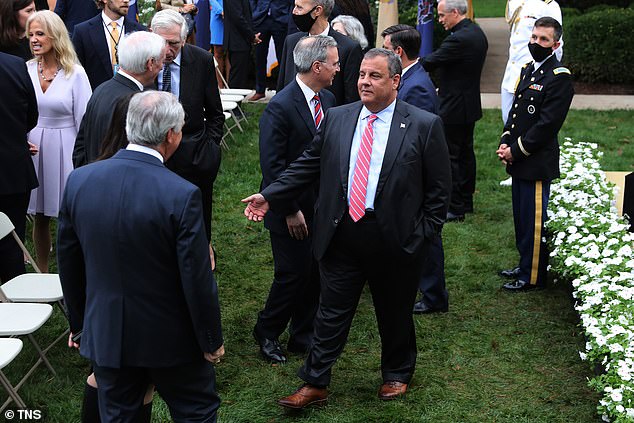 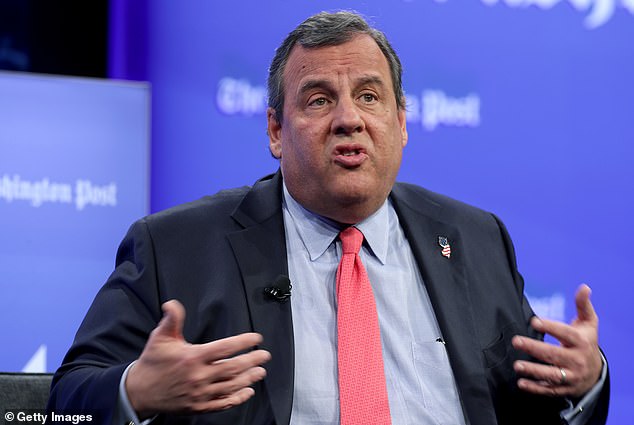 Christie (pictured): ‘I believe we have not treated Americans as adults, who understand truth, sacrifice and responsibility that I know them to be’

Christie has long championed the opinions of Trump, who repeatedly downplayed the severity of the pandemic, but broke ranks on Thursday in an interview with The New York Times.

In his statement, Christie criticized the Trump administration.

‘I believe we have not treated Americans as adults, who understand truth, sacrifice and responsibility that I know them to be,’ he said.

‘I have also concluded that like much else in 2020, that the virus is governed by our two dominant political and media extremes: those who believe there is nothing to this virus and those alarmists who would continue to close down our country and not trust the common sense of the American people. Both are wrong.’

White House officials have investigated the event as a COVID ‘super-spreader’ that may have contributed to several attendees positive diagnoses.

In his statement, Christie urged Americans to take the virus seriously as officials continue to record cases and deaths at concerning levels. Eight million Americans have been infected and 217,000 have died.

‘I hope that my experience shows my fellow citizens that you should follow CDC guidelines in public no matter where you are and wear a mask to protect yourself and others,’ he said.

Christie told the New York Times that he was treated with a combination of blood thinners, the drug remdesivir and an experimental cocktail created by Eli Lilly, which recently halted drug trials over safety concerns.

He added that he’s still fatigued, but his symptoms are not nearly as severe or debilitating as they were when he was first infected.

Christie did not directly blame Trump for catching COVID-19, but admitted he mistakenly believed he was safe because everyone around the president was required to undergo daily tests.

‘I don’t know who infected me and I don’t know how frequently he was tested,’ Christie told the Times, referring to Trump.

THE TOLL OF COVID FROM SCOTUS NOMINEE EVENT

* Bill Barr, 70: self-isolating out of caution.

AT EVENT AND STOOD AT BACK OF ROSE GARDEN

He later confessed on Good Morning America that the preparation team congregated around Trump without any of them wearing face masks.

‘No one was wearing masks in the room when we were prepping the president during that period of time,’ he said on October 2. ‘And the group was about five or six people, in total.

Trump revealed that day he contracted the virus, and Christie announced his infection the next day.

Throughout his stay, he and doctors presented an optimistic prognosis that was derailed when Mark Meadows, White House Chief of Staff,  who told reporters that his ‘vitals were concerning.’ 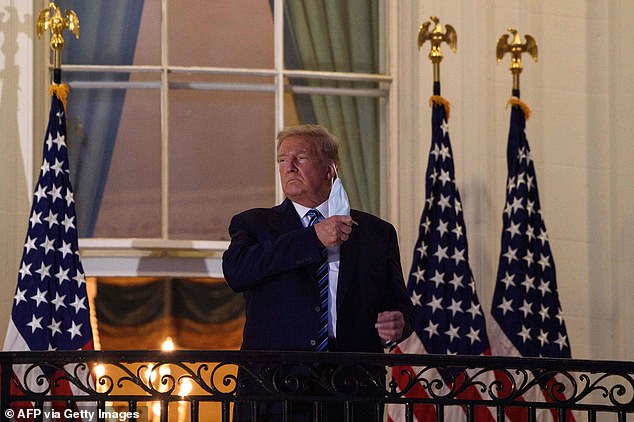 Donald Trump, whose infection with COVID-19 was confirmed at 1am on Friday, removed his face mask on Monday night

Trump has since returned to the White House, and has attempted to level his COVID-19 recovery as justification for previously flouting CDC guidelines and minimizing the pandemic. He called catching the virus a ‘blessing from God.’

One post was labeled ‘misleading’ for suggesting Trump was completely immune from the virus now, while the other spread misinformation by claiming the flu was deadlier than COVID-19. 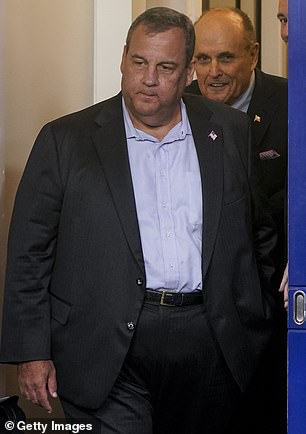 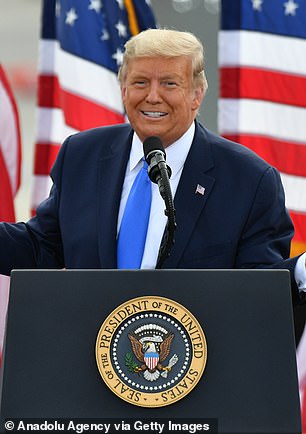 Christie (left) has urged Americans to take COVID-19 more seriously after his hospitalization, while Trump (right) has continued downplaying the virus

I am happy and fortunate to inform you that I have recovered from COVID-19. Before this good news, however, I spent 7 days in the Intensive Care Unit of Morristown. Medical Center to get treatment and insure this good result for me and my family.

I want to thank the doctors and nurses for their skillful and compassionate care. I want to thank the manufacturers of Remdesivir and the Eli Lilly monoclonal anti-body cocktail for giving me access to their extraordinary treatments. I am confident that all of those factors contributed to my good health today.

When you have seven days in isolation in an ICU though, you have time to do a lot of thinking. I did and have come to the following conclusions:

While we may seem very divided today, I do believe we can use this public health tragedy to bring us together. It is never too late to start. It will take leadership that both challenges and trusts the American people. After all, we are America, the world’s greatest hope.

thegirlsunhttps://thegirlsun.com
Previous articleEverton beat Liverpool a decade ago, but where did all the players end up?
Next articleBoris Johnson to reveal whether UK is walking away from EU trade talks

Italy has imposed new restrictions on bars and restaurants aimed at halting the spread of coronavirus after days of record infection numbers.Restaurants and...
Read more
U.S

Why white noise apps won't help you to sleep: Method may cause more harm than good, study suggests

Playing white noise at night to soothe a restless baby may...
Read more

Free agent Jack Wilshere takes to the park to keep up...
Read more

Channel Seven's SAS Australia SMASHES The Block in the ratings

Channel Seven's SAS Australia SMASHES The Block in the ratings as...
Read more

The disgusting photo that proves you should be washing your 'clean'...
Read more

GCHQ had a 30-year 'whites only' rule for hiring staff, says new book

Ronnie Wood's townhouse where the musician swapped his raucous rocker behaviour for a relaxed family life has gone on sale for £3.85 million. The Rolling...
Read more