Ousted Chicago Police Chief Eddie Johnson has been accused of ‘years of sexual assault and harassment’ by the female driver he was seen kissing in a bar during a drunken night out that ended his career.

Cynthia Donald worked as Johnson’s security guard and driver. She’d been drinking with him the night he was eventually found slumped at the wheel of his car. He was fired over the incident and his handling of it.

On Thursday, she filed a lawsuit against him in which she claimed he’d victimized her for years.

She claims he sent her nude photographs, forced her to engage in sex acts and sexually harassed her at work.

The lawsuit claims he intentionally moved her onto his security detail in 2016 because he was attracted to her then, three months later, pushed her onto a couch, took off her pants and performed oral sex on her without her permission.

He then ejaculated on her, the lawsuit claims, and said: ‘Now you belong to me.’ 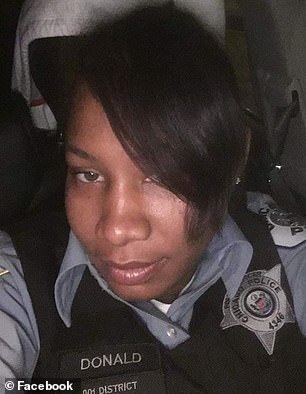 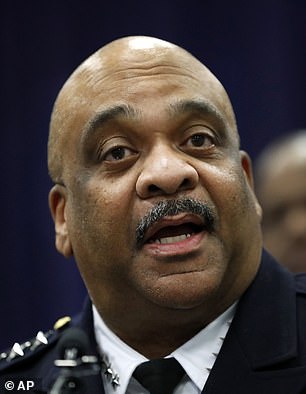 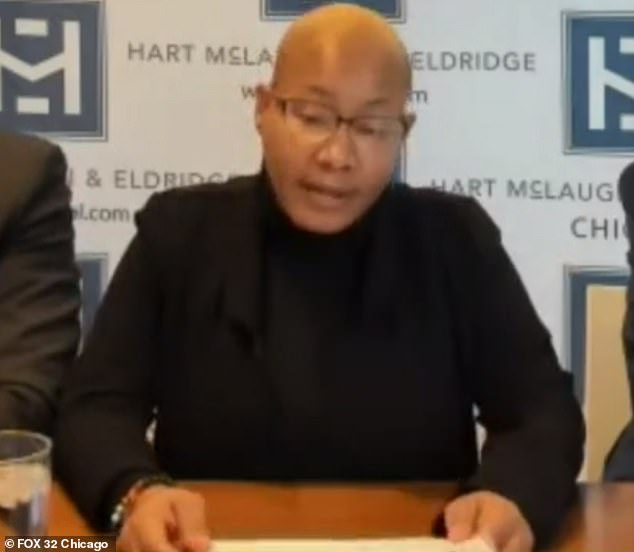 ‘Superintendent Johnson used his position of power and authority over Plaintiff to pressure her into engaging in these sexual acts by conditioning her employment and advancements within (the Chicago Police Department) upon her submission to unwanted and unwelcomed sexual activity, promising her promotions, and berating her whenever she summoned the courage to resist his advances,’ the lawsuit alleges.

In 2019, when Lightfoot found out about the night out that cost Johnson his career, Donald says she was treated unfairly because she was transferred to the records division of the police force.

Lightfoot fired Johnson in extraordinary fashion, publicly shaming him for allegedly misleading her and the public. He’d been due to retire anyway.

Johnson and Donald were seen kissing at a bar in Chicago on October 16th. Surveillance footage showed them kissing repeatedly inside Ceres Bar, which is known for its heavy pours.

Later that night, Johnson was found alone slumped at the wheel of his car. He had been drinking.

On Thursday afternoon, Donald and her attorneys held a virtual press conference where they said she’d been subjected to ‘sexual and emotional torture’.

They also said he ‘forced’ her to go with him to the bar that night.

‘My hope is that other women who are also survivors will have the courage to come forward and speak out. The stories of abuse of other cops gave me the courage to speak.

‘For more than three years, I was subjected to unwanted, uninvited sexual abuse, and intimidation in a hostile environment by my boss. 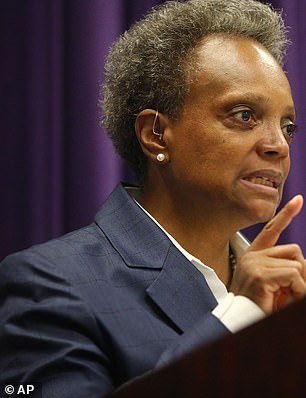 ‘He referred to me by derogatory names and in demeaning ways.

‘He referred to me as his girl. At times I was able to avoid his advances, he would tell me “you got away this time”.

‘He made it clear I had to follow his orders, which included engaging in unwanted sexual acts with him in order to keep my job.’

The night that led to his firing, Donald’s attorneys say he ‘ordered’ her to go with him to Ceres.

‘He ordered Cynthia to come with him to a bar, which she did. Later that evening, he drove them back to HQ. She drove herself home.

‘After that night, Lori Lightfoot was updated as to what happened and instead of speaking with Cynthia, she told Eddie to ‘dump’ Cynthia and put her in the records department at a desk job.’

Johnson has not responded to her allegations.

On Thursday, her attorneys said she never reported her allegations to the police because he ran the department.

‘At no time was it consensual it was always under duress. She was always in fear that if she didn’t comply she’d be terminated or demoted.

‘[The] reason Cynthia did not make a formal complaint is because of the culture at CPD. It’s well-documented. We identify at least another three other CPD officers. This was the highest ranking officer within CPD. This is a boss with a badge and a gun. Someone Cynthia certainly didn’t feel comfortable outing to anybody in CPD or in the Mayor’s office.

‘We were stonewalled when we asked for records… unfortunately that’s what’s happening at CPD. Officers don’t feel comfortable or safe reporting bad behavior,’ one of her attorneys said.

thegirlsunhttps://thegirlsun.com
Previous articleChelsea boss Frank Lampard confirms Edouard Mendy will not feature Southampton
Next articleWimbledon WILL go ahead next year even if it takes place behind closed doors

Ivanka Trump paid a surprise visit to a Miami charter school run by singer Pitbull during a visit to the vital swing state...
Read more
U.S

Donald Trump's Florida resort billed taxpayers $3 for a glass of water and $6,000 for flowers when world leaders visited, according to new...
Read more
U.S

Rudy Giuliani demanded an apology from Fox Business host Kennedy on Tuesday evening and threatened to walk out of their interview after she...
Read more

Just hours after Amy Coney Barrett was voted in by the Senate’s Republican majority on Monday, the US leader saw her sworn in...
Read more

Danny Dyer has once again become an unlikely political commentator two years after he famously waded into the Brexit row. More commonly known for...
Read more

'LaLiga would be a nice change and I'm NOT too young...
Read more

iPhone 12, 12 Pro and the iPad Air are available today

Apple's new iPhone 12 goes on sale worldwide today, with keen customers able to pick up a handset either online or in store.To...
Read more
World

The hole represents the 200,000 Hungarians who were forced to flee their country after the Soviet army brutally took control of Budapest back...
Read more