Days Of The Bagnold Summer(Various streaming platforms, from Monday, 12)

Every new Woody Allen film used to be a cinematic event. Any hand-wringing over it was always strictly artistic.

Had he lost his touch? Was it as good as his early ones? Into which Allen category did it fall: great, mediocre or rubbish?

The #MeToo movement has changed all that by inflaming an old sexual abuse accusation against him — though a judge ruled it unproven.

Either way, his films now inspire a new kind of hand-wringing, amid a fug of moral equivocation. 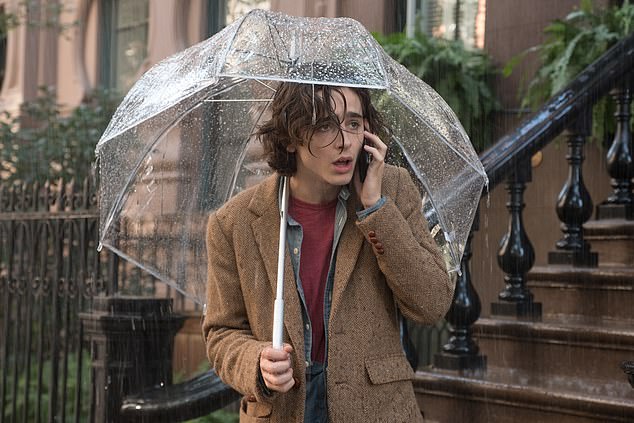 Let’s ignore that by posing only one question of A Rainy Day In New York: great, mediocre or rubbish?

Regrettably, and I write as a fan of many of his films, it falls somewhere between the latter two.

That means having to go to Manhattan, and Gatsby suggests they make a weekend of it.

He has just won $20,000 playing poker, so he blows some of it on a suite at the swanky Pierre hotel.

From there, the film chronicles their respective farcical adventures over a single eventful day.

The director, his screenwriter (a miscast Jude Law), and a movie star (Diego Luna) all fall for Ashleigh’s excitable charm, undeterred, if not positively encouraged, by the fact that she’s a great deal younger than they are — an Allen motif.

While we’re on the topic, though I do think Allen has been maligned, it’s still a trifle unsettling to think of him, aged 84, directing Fanning in a scene in which she runs around in skimpy underwear.

Meanwhile Gatsby, tired of waiting for Ashleigh to return from her assignment, runs into Chan (Selena Gomez), the snarky younger sister of a girl he used to date.

Then he pays a high-class hooker to impersonate Ashleigh at a family party.

All of which would be fine if we cared about these characters, but we don’t.

Maybe we would if Allen could write plausible dialogue for the generation we know as millennials, but he can’t, or at least doesn’t.

Unlikely phrases — ‘a farrago of Wasp plutocrats’ — exist not in their own right but as set-ups for jokes.

Chalamet, for all his engaging qualities, strives way too hard to sound like the kind of character Allen himself might have played 50 years ago, or more.

And Fanning overdoes the Annie Hall kookiness by at least 20 per cent, making A Rainy Day In New York little more than a tinny echo of the director’s past glories.

Really, the film’s only credible storyline involves Gatsby’s edgy relationship with his imperious mother (Cherry Jones), but there is an infinitely better mother-son drama out soon… 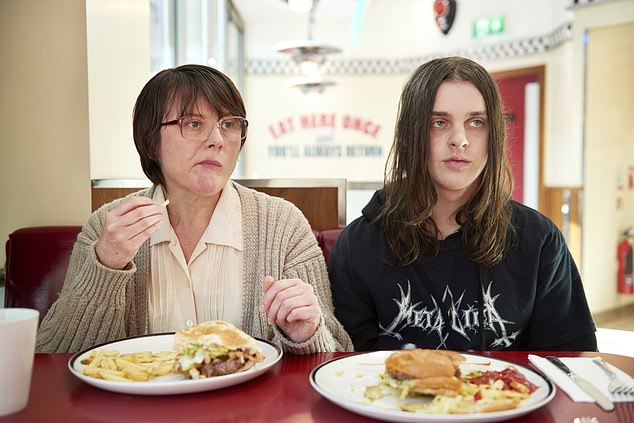 Days Of The Bagnold Summer is adapted from a graphic novel, and has a lovely soundtrack by the Scottish band Belle And Sebastian

Days Of The Bagnold Summer is directed by Simon Bird of The Inbetweeners fame, and written by his wife, Lisa Owens.

It is adapted from a graphic novel, and has a lovely soundtrack by the Scottish band Belle And Sebastian.

She is a school librarian trying, and mostly failing, to get along with her grumpy teenager Daniel (Earl Cave, son of the singer-songwriter Nick Cave), a long-haired heavy-metal devotee.

Daniel was meant to spend the summer in Florida with his father, but the trip is cancelled, leaving him with no plans — just a mother he regards, in his grungy teen way, as the most worthless, embarrassing creature on the planet.

Yet there’s an aching shyness and vulnerability to Daniel that makes him more than Harry Enfield’s Kevin the Teenager writ large.

Cave plays him splendidly, and Dolan is terrific, too, while Tamsin Greig and Rob Brydon add heft to a moving portrayal of a universal yet unique dynamic.

It made me laugh out loud, even as I winced in uncomfortable recognition of the teenager I used to be.

Echo In The Canyon (Various streaming platforms, from Monday, 12)

Like Days Of The Bagnold Summer (see above), Dating Amber is a drama about the teenage condition, full of laughs but slightly too painful to be described as a comedy.

Set in County Wicklow in the mid-1990s, it stars Fionn O’Shea, whom you might recognise as the objectionable Jamie in the hit BBC TV series Normal People.

He plays Eddie, whose classmates at secondary school rib him for being gay.

They don’t know if he is; he’s just not an alpha male. But he is indeed struggling with his sexuality, unwilling to admit it even to himself. 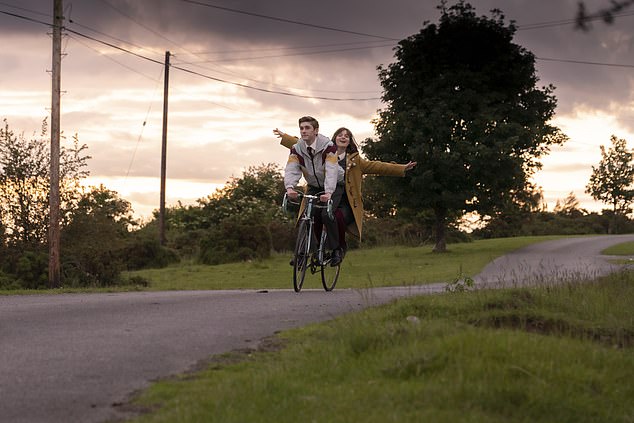 Like Days Of The Bagnold Summer (see above), Dating Amber is a drama about the teenage condition, full of laughs but slightly too painful to be described as a comedy

Meanwhile, his fellow pupil Amber (Lola Petticrew) is also gay, and also on the receiving end of homophobic abuse, which has only ever eased, briefly, in the wake of her father’s suicide.

So the pair of them cook up a plan. If they pretend to be a couple, it will stop the bullying.

That’s the premise of David Freyne’s highly enjoyable film, which is all the funnier for its deliberate lack of subtlety.

The crass homophobes at school, Eddie’s macho soldier father, even his more sympathetic mum (nicely played by Sharon Horgan) are all caricatures to one extent or another, but that doesn’t diminish the poignancy as Eddie and Amber become more at ease with their homosexuality.

Andrew Slater’s documentary Echo In The Canyon whisks us 30 years further back in time, remembering the California folkrock scene of the mid-1960s.

Jakob Dylan, Bob’s son, interviews many of the movers and shakers — those who have somehow survived all the drugs and booze.

There are some great insights into how the bands of the time influenced each other.

Brian Wilson of The Beach Boys recalls the impact The Beatles’ album Rubber Soul made on him, and how he then went away and made Pet Sounds.

This in turn, as Ringo Starr concedes, was a major influence on Sgt. Pepper.

If you love all that stuff, as I do, this will be 82 minutes well spent.