REVEALED: The BEST potato scallop in Australia for 2020 – and the secret ingredients that make it a winner

A humble potato scallop from a little-known fish and chips shop has been voted the best in Australia.

Blue Lips Fish & Chips in Exmouth, a small resort town in Western Australia, took out the coveted ‘best potato scallop’ category in the Wotif Uniquely Aussie Awards of 2020 – the annual guide to the country’s ‘most underrated gems’.

The battered and deep fried spud discs were judged on a list of criteria including ‘crisp and fluffy’, ‘should melt in your mouth, but shouldn’t be too greasy’.

And the potato scallop from Exmouth proved to be a winner after more than 1,200 foodies voted for their favourite snack via the Wotif survey.

The special homemade creamy mashed potato, leek and cream sets the golden creation apart from just about every other potato scallop sold around the country. 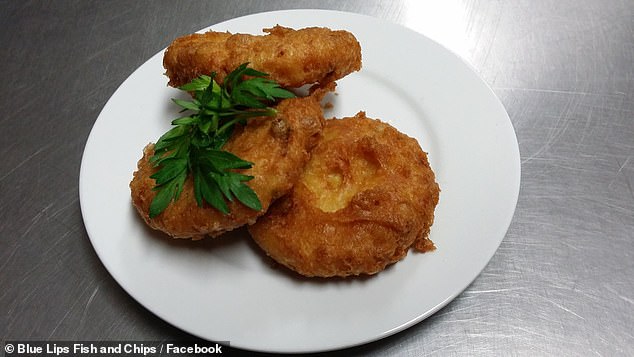 What do you call this snack?

‘The friendliness of owners Adam and Jodie Moir alone make Blue Lips Fish & Chips a worthy winner but it was their unique potato cake recipe that saw them voted the best in Australia,’ Wotif managing director Daniel Finch said.

‘Along with some of the tastiest fish in Western Australia, this Exmouth favourite serves up such a stellar homemade potato creation, the recipe is a trade secret (but we hear mashed potato, leek and cream are involved).

‘Wrapped in paper – the way it should be – we recommend ordering yourself a selection of battered or grilled delicacies (and a potato cake obviously) and head over to the beach for one of the best dinners in Exmouth.’

Owners of Blue Lips Fish & Chips said they have been since been inundated with ‘hoards of visitors’ after being recognised for having the nation’s best potato scallop. 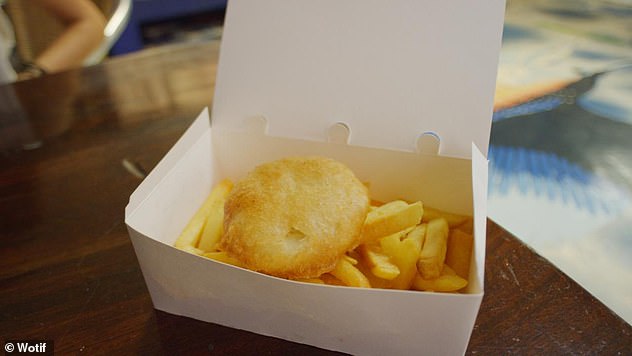 The potato scallop from Exmouth proved to be a winner after more than 1,200 foodies voted for their favourite snack via the Wotif survey

‘To be recognised with this award is really amazing,’ they said.

‘We have been frantically making batches to try our best not to run out during the holidays – it’s quite a process as they aren’t your “regular” potato scallop. We use hand mashed potato, butter and leek then they are battered and deep fried.

‘Biting into one of our Potato Cakes (as we like to call them) while watching the sun set from The Vlamingh Head lighthouse is a truly Aussie experience not to be missed for anyone visiting Exmouth.

‘Finishing a day of adventure off with one of our delicious potato cakes, well, it just doesn’t get any better than that.’

Potato scallops, which were popular in school canteens in the 90s, are typically sliced potatoes, dipped in batter and deep fried to order at fish and chips shops.

With ongoing travel restrictions due to COVID-19, Aussies have been opting for local destinations in recent months to get their immediate travel fix, a trend Wotif has coined a ‘state-cation’.

So, with intrastate trips more relevant than ever, this year’s awards, now in their third year, celebrates all there is to love about a classic local getaway, helping to inspire Aussies to plan their next state-cation when the time is right.

Mother-of-two admits there isn't 'one single thing' she likes about having...
Read more
Feamil

BREAKING NEWS: Wasps are given the all-clear to play in the...
Read more
Tv & Show