By Anna Mikhailova For The Mail On Sunday

In a blistering attack, insiders accused EU negotiators led by Michel Barnier of using the meetings to ‘shore up their domestic position’ – with particular criticism levelled at French President Emmanuel Macron.

‘There are signs that EU leaders, worried about the prospect of populist politicians such as Marine Le Pen, have decided that they would put domestic politics ahead of agreeing a free-trade agreement with the UK,’ said one source close to the talks. 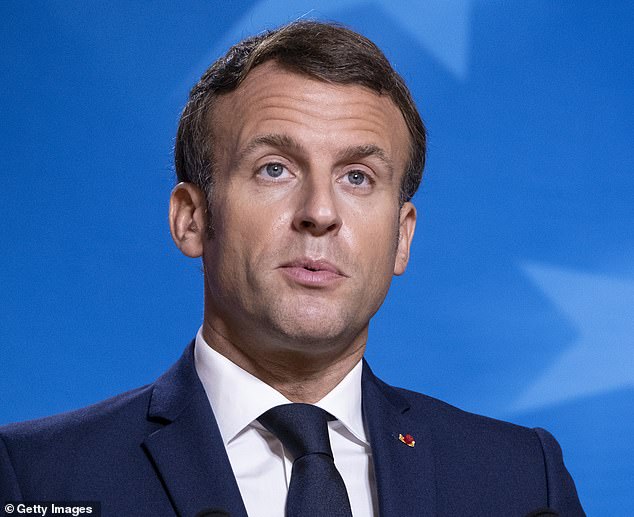 In a blistering attack, insiders accused EU negotiators of using the meetings to ‘shore up their domestic position’ with particular criticism levelled at French President Emmanuel Macron (pictured)

Brussels was last night warned that it could be frozen out for years if it refuses to alter its approach.

‘It may be several years before we can meaningfully return to the negotiating table,’ a Government source said.

In a withering assessment of Brussels’s approach to a post-Brexit trade agreement, sources cited figures that they claim showed the EU was not serious about securing a deal.

‘Over the course of talks this year, the UK proposed 224 sessions, whilst the EU only proposed 173 sessions,’ one said, adding that the approach was interpreted as part of a strategy of trying to ‘bounce’ the UK into accepting a last-minute legal text prepared by Brussels.

Amid the war of words, Michael Gove will today launch a public information campaign to encourage businesses to prepare for Britain’s departure on January 1.

A TV advert with the slogan ‘Time is running out’ will air tonight on ITV.

With the October 15 deadline for agreement missed, Boris Johnson last week warned businesses to ‘get ready’ for leaving without a deal after concluding that the EU’s demands meant there was no point continuing talks. Mr Barnier was even told not to bother travelling to London for talks this week.

A Minister said the belief was that Mr Macron’s apparently tough position on the highly charged issue of fisheries was a ‘sideshow’ designed to extract concessions from the UK in other areas. 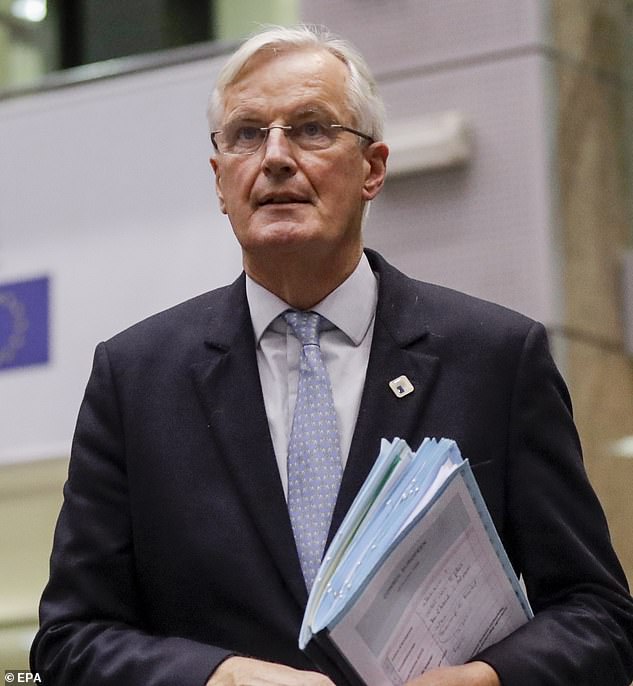 However, the source accused Brussels negotiators of failing to deliver on their previous promise to ‘intensify’ talks, adding: ‘Agendas have become thinner and shorter.

Instead of engaging in a meaningful negotiation, the EU seemed to think they could play for time to force the UK to make concessions that would fundamentally undermine our legal and economic autonomy.’

The insider said the European Council had published their conclusions about talks that took place on Thursday before the discussions had even been completed.

‘That shows they are not taking this process seriously,’ the source added. ‘We couldn’t continue with a negotiation that was more like performance art than real engagement.

‘That is why we told Michel Barnier that there is no point in him coming to London this week unless there is a fundamental change of approach from the EU.’

Last night, a Government source said: ‘The EU must fundamentally change course or the UK will leave on Australian-style terms, under which we will thrive.’

Peers are tomorrow expected to mount opposition to the Government’s Internal Market Bill as it begins its second reading in the House of Lords.

The Bill overrides parts of the EU divorce deal and the Government accepted that it ‘does break international law’ in a ‘very specific and limited way’.

thegirlsunhttps://thegirlsun.com
Previous articleJessica Hart shows off her 38-week baby bump in activewear
Next articleMeet the woman who has transformed 200,000 smiles with her Sparkling White Smile business

The year of the DIY mince pie! Britons are baking nearly twice as many Christmas treats this year

For the past two months I have been suffering more than a little daily anxiety: not sleeping, waking each morning far too early....
Read more
News

Thanks to Roald Dahl and numerous wildlife documentaries, it’s generally accepted that crocodiles aren’t the fussiest of eaters.But in the UK’s only crocodile...
Read more
News

This misunderstood spot is the UK's City of Culture 2021 -...
Read more

Shane Warne auctions off his Brighton home for a whopping $5.65M

Shane Warne auctioned off his Brighton home on Saturday, with bidding reaching a whopping $5.65 million. However, the property was passed on when it failed to...
Read more

China: Australia's relationship has been 'tested' says senatorTasmanian Senator Eric Abetz, who is a member of the Foreign Affairs, Defence and Trade Legislation...
Read more

SAMSUNG has just announced the launch of a new comedy channel which is available now on most of its popular smart TVs.
Read more

The year of the DIY mince pie! Britons are baking nearly twice as many Christmas treats this year

The year of the DIY mince pie! Britons are baking nearly...
Read more

Type 2 diabetes: A breakfast including eggs is one of the healthiest for blood sugar level

Given the link between type 2 diabetes, blood sugar, and insulin, it isn’t surprising that leading health experts and dietitians state breakfast being...
Read more
News