A black father from Oregon is suing a Portland gas station for racial discrimination, claiming he was denied gasoline for his lawnmower because the white attendant assumed that he would use the flammable liquid to start fires at protests raging in the city.

Dominique DeWeese, 37, filed a $350,000 complaint on Wednesday against Jay’s Garage on Southeast 7th Street in Portland. The lawsuit alleges that he was refused  service in July based on the color of his skin.

According to the court filing, DeWeese, a father-of-two who works as the director of volunteer recruitment for the Oregon Robotics Tournament and Outreach Program, on July 28 came by the garage near his house with an empty canister, seeking to buy gasoline for his lawnmower to do some yard work. 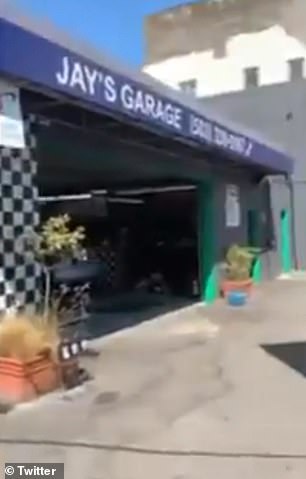 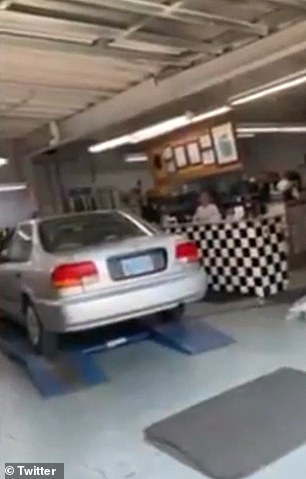 A black Portland, Oregon, man has filed a $350,000 lawsuit against Jay’s Garage, claiming racial discrimination. The plaintiff claims he was refused service by a white worker (right) 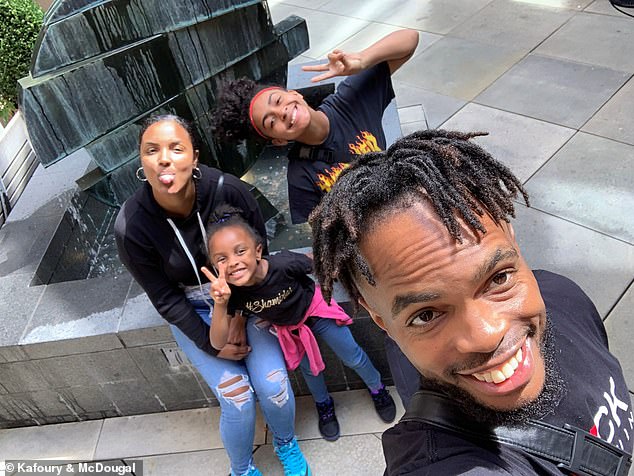 Dominique DeWeese, 37, a father-of-two and educator (pictured with his family), said the gas station attendant refused to sell him gasoline because he thought DeWeese was a Black Lives Matter protester and would start fires

But the worker at Jay’s Garage would not sell him the gasoline, saying that Black Lives Matter protesters have been setting fires all over the city, and he wanted to do his part to help put an end to that.

DeWeese recorded his exchange with the white gas station employee on video, which went viral.

The recording begins with the unnamed attendant directing DeWeese to another gas station two blocks away, and then threatening to call the police on him.

‘I’m trying to understand how come I can’t get gas,’ DeWeese demands. ‘You’re not explaining why you’re refusing to sell me gasoline.

‘You don’t watch the news?’ the worker asks.

‘No, I don’t watch the news,’ DeWeese shoots back.

‘Well, there are dumpster fires. They get a can of gasoline and they start the fire,’ the attendant explains. 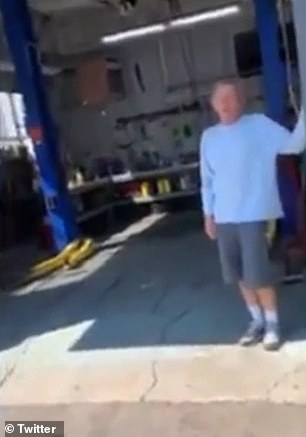 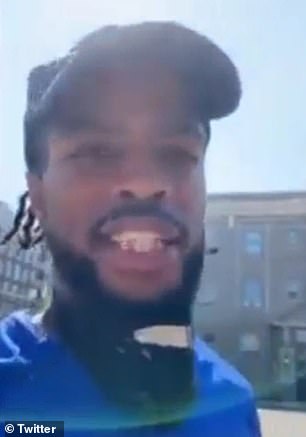 Jay’s Garage worker said in the video he wanted to do his part to put an end to fires. DeWeese said into the camera that the man was ‘being racist’ 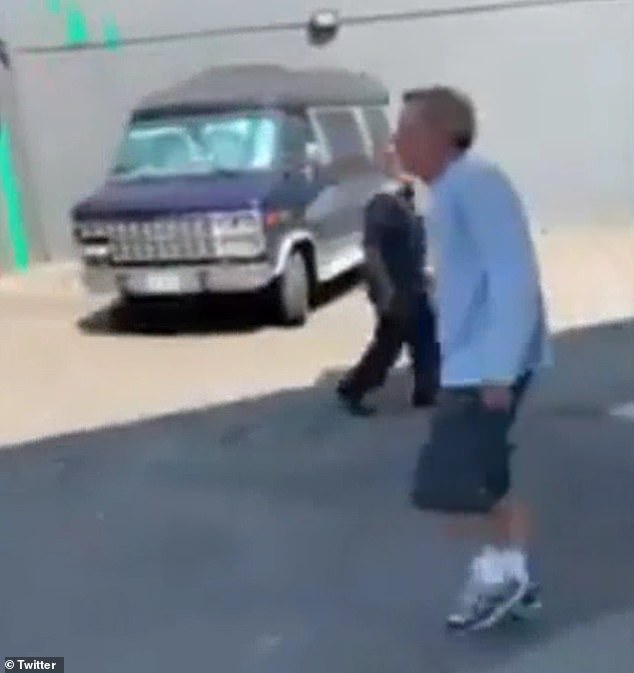 At the start of the video, the worker directed DeWeese to another gas station, and then threatened to call the police on him

‘So are you picking and choosing who to sell gasoline to?’ DeWeese asks.

Later in the video, the attendant says there are dumpster fires burning all over town.

‘What does it have to do with you and selling me gas?’ DeWeese continues to push.

The garage worker brings up protests and points out that DeWeese has an empty container in his hands that he wants filled.

‘I’m just doing my part to keep down the fires in town,’ the attendant says.

‘Dude, do you know what you’re doing to your place of business?’ DeWeese asks. 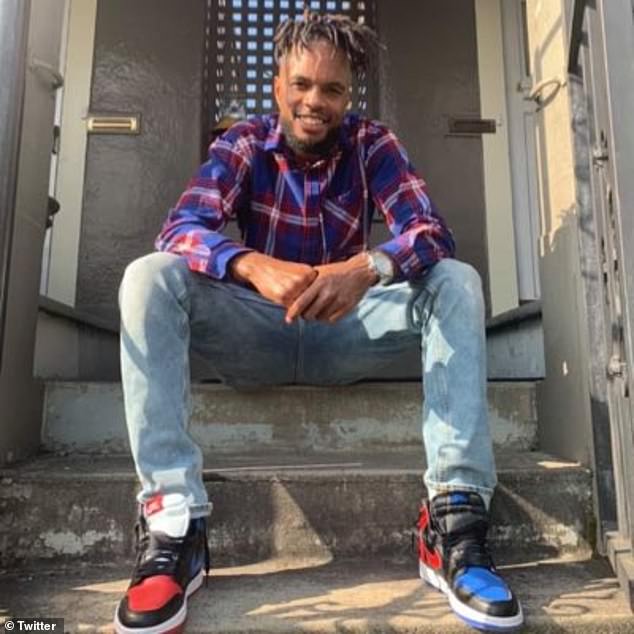 DeWeese said as a black man in Portland, he has been subjected to racial discrimination his entire life

‘Oh, like we can make some money on a gallon of gas,’ the attendant scoffs.

DeWeese then points the phone at himself at says into the camera: ‘they’re refusing to sell me gasoline because he’s judging me and stereotyping me and saying I’ll start riots and fires.’

He turns the camera toward the white attendant and adds: ‘he’s being racist.’

The owner of Jay’s Garage, Miles Dewhitt, told KGW he fired the attendant seen in the video that same day after seeing DeWeese’s video on social media.

‘What happened is against company policy,’ Dewhitt insisted. ‘We serve everyone. I feel bad it happened to the guy. It’s not the way we are.’

Speaking to multiple local outlets this week, DeWeese said that living in Portland as a black man, he has been subjected to racial discrimination his entire life.

‘It happens so frequently that we almost become used to it, like it’s normalized,” said DeWeese. ‘It’s not OK.’

DeWeese’s case is one of four so-called ‘Shopping While Black’ lawsuits that were brought on the same day by the firm Kafoury & McDougal against Oregon businesses.

In one of the complaints, a black woman was allegedly denied service at the Walmart in Wood Village because of the color of her skin.

Another lawsuit claims that a while clerk at Jackson Food Stores Gas Station in Tanasbourne refused to fill up a black customer’s car and told her, ‘I don’t serve Blacks,’ according to a press release from the law firm.

The final complaint alleges that a black woman was falsely accused of shoplifting at the northwest Portland Safeway and had to empty her purse onto the floor to prove her innocence.

‘The incident was the most humiliating event that has happened to her,’ the law firm representing her stated.

thegirlsunhttps://thegirlsun.com
Previous articleMICAH RICHARDS: Nobody is laughing at Arsenal now with Mikel Arteta proving to be a brilliant boss
Next articleCoronavirus UK: Jeremy Corbyn breaks rules AGAIN at memorial

The drowning of a 12-year-old Somali girl in a river was an accidental death, a coroner has concluded today.   Shukri Yahye-Abdi drowned after getting...
Read more

England's ODI series against South Africa will GO AHEAD starting on...
Read more

Keith Urban reveals how Pink will take part in his upcoming...
Read more

Kim Jong-un is ‘having difficulty’ reveals North Korea expertSince the outbreak of coronavirus, the hermit state has continued to claim the country has...
Read more

Chinese trade 'could end' under post-Brexit law to stop the UK...
Read more

She's planning to celebrate her first Christmas as a family-of-three with her husband AFL star Lance 'Buddy' Franklin and their nine-month-old daughter Tullulah.And on...
Read more