Bilie Faiers and her husband Greg Shepherd have been refused planning permission to build their dream home in Essex.

The pair had bought a run down £1.4 million 1920s property in Brentwood and dreamed of turning it into a five-bedroom luxury home over a planned year and a half long project.

But according to The Sun, Brentwood Borough Council have rejected their plans, calling them ‘too grand’. 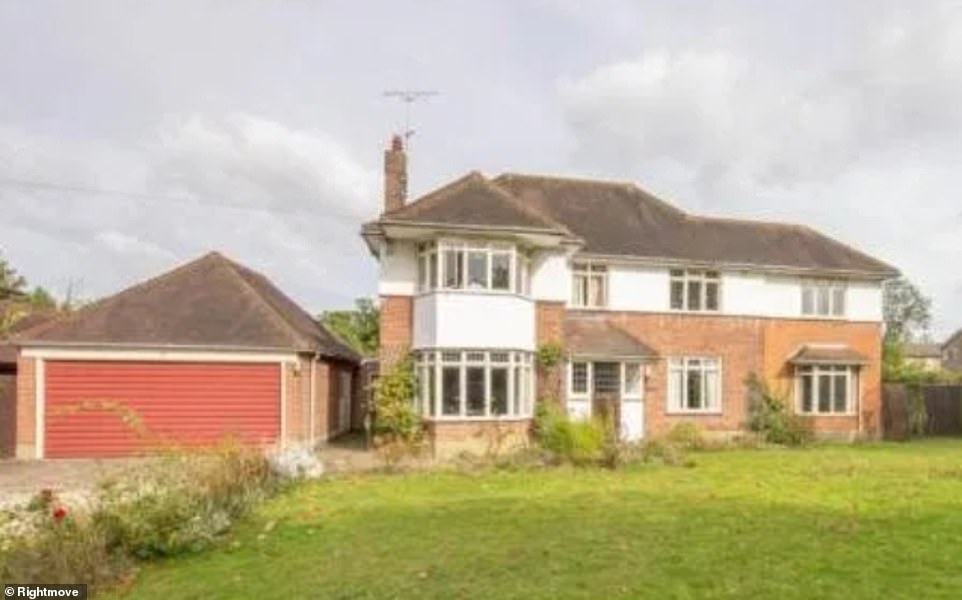 Back to the drawing board: Billie Faiers and husband Greg have been refused permission to build their dream home after splashing out on this rundown £1.4m 1920s mansion in Essex and planning a year long renovation project

The council officer’s report states: ‘it would be the biggest house on the street and the increase in size from the original home would not be acceptable.’

The reports also had concerns about whether the home would be sympathetic to the local area.

The decision notice writes: ‘The proposed extensions when combined would create a development which is excessive in terms of bulk, size, massing, roof design and siting, resulting in overly dominant additions to the existing dwelling and a substantial building out of character and appearance within its context. 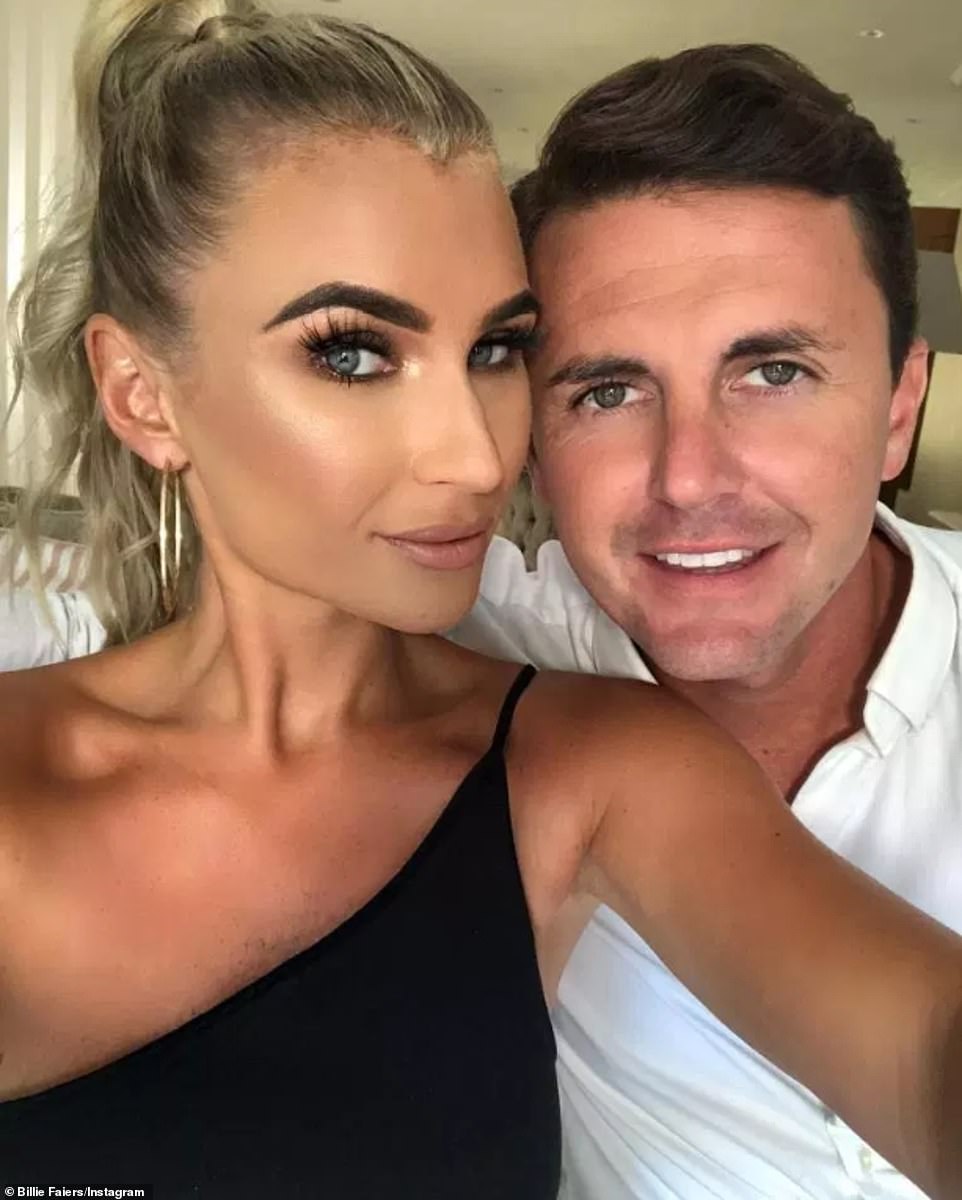 Concerns: The council’s report worried about the ‘grand’ size of the home and felt that it would ‘reduce the spatial quality between properties which is characteristic of the area, to the detriment of local visual amenity’

‘It would unacceptably reduce the spatial quality between properties which is characteristic of the area, to the detriment of local visual amenity.’

It’s been claimed the previous owners were granted permission to build two houses on the land, yet still, the plans for one large home have been turned down.

The neighbours had expressed concern that the property would be too close to theirs and affect their privacy. Yet the report did not find this to be a concern. 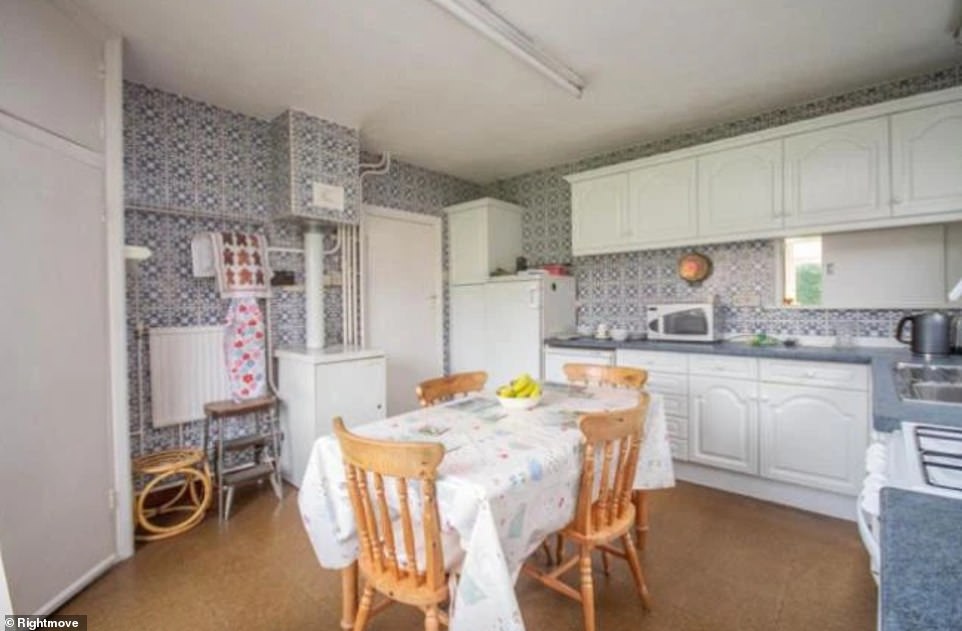 ‘Old and dated’: The Mummy Diaries star, 30, has previously admitted the interior of the sprawling house is ‘old and dated’ and says she wants to give it a glitzy revamp 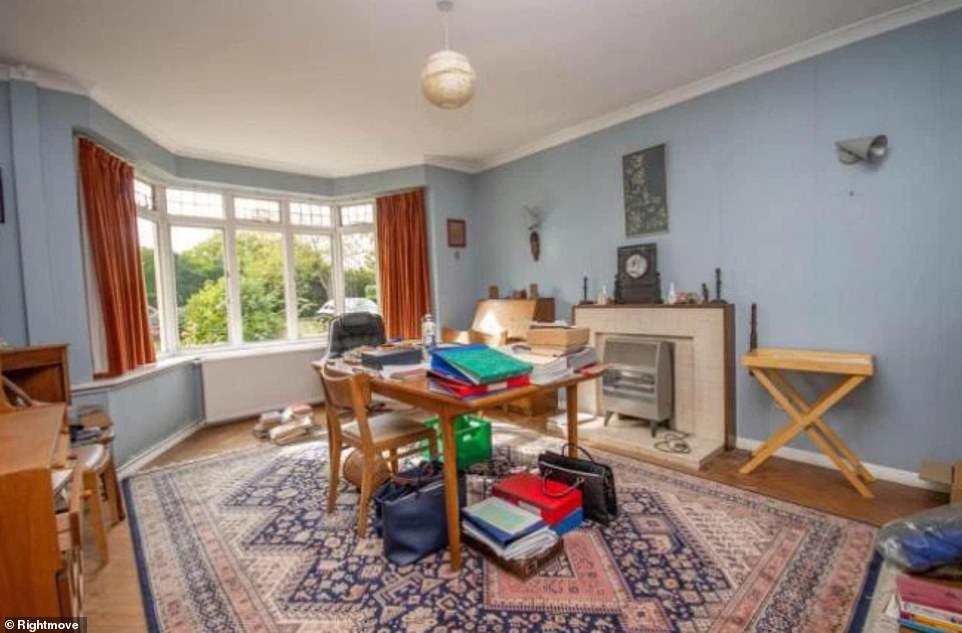 Work to be done: Plans submitted to Brentwood Borough council include five bedrooms, dressing room, a study, lounge and a kitchen diner

The Sun writes that the report concludes: ‘Taking all matters into the planning balance the proposal cumulatively results in significant harm to the appearance and character of the area, and cannot be mitigated by the imposition of planning conditions; the proposal therefore conflicts with policy CP1 and is recommended for refusal’.

MailOnline has contacted a spokesperson for Billie Faiers for more information.

The Mummy Diaries star Billie, previously admitted that the interior of the sprawling house is ‘old and dated’ and estimated that it will take the couple around a year to completely renovate it.

The couple revealed that they wanted to start off their journey by showing their followers a look at their current ‘old and dated’ kitchen on their home Instagram ‘homewiththesheps’.

The couple said they have planned to change the layout of some of the house, to make way for a kitchen extension which will become a kitchen/dining area/soft area, complete with adjoining play room and utility. 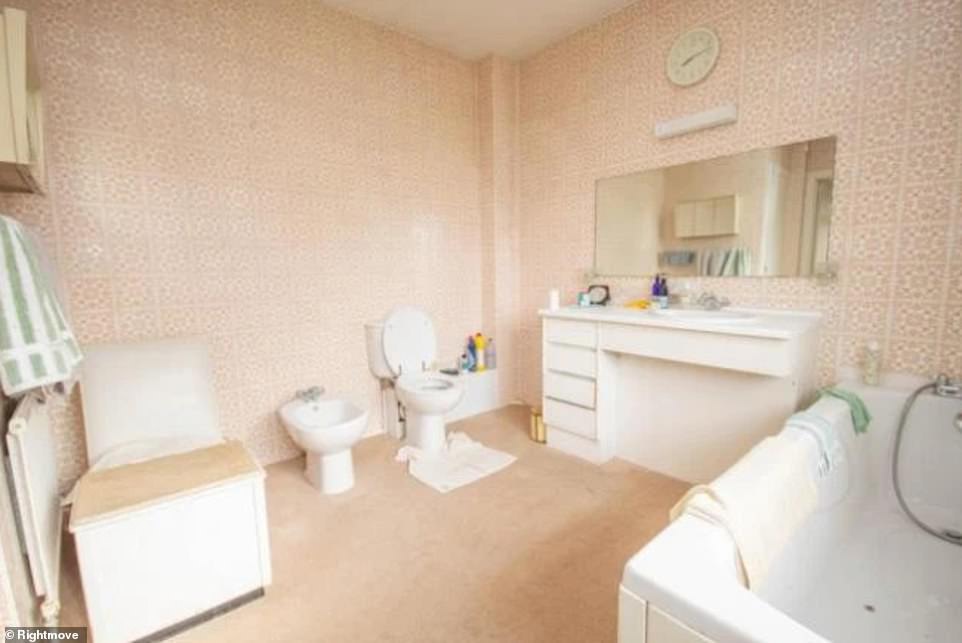 Peachy keen: The Shepherd’s new family home also includes at least two large bathrooms, one of which has peach patterned tiles and a white suite 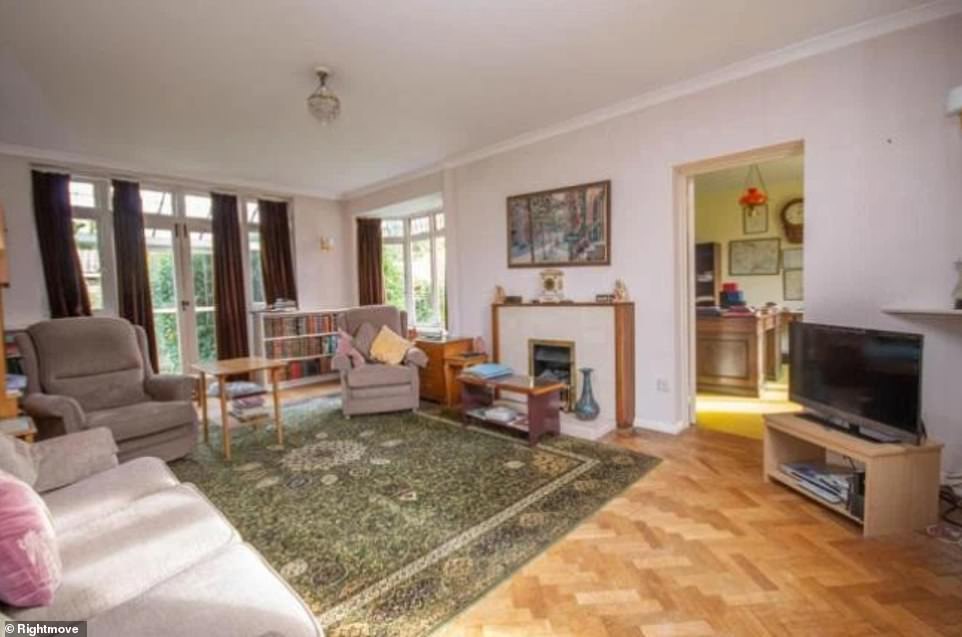 Potential: A large living space with French doors looking out into the garden also boasts a stunning Parquet flooring, however it remains to be seen which features will remain

Billie, 30, and Greg, 33, penned: ‘Hello To all of our new followers❤️ …. Thank you for following us as we begin our new home renovation journey.

‘I thought I would start off by showing you the kitchen… the Hub of the home to us as a family.

‘As you can see the kitchen in its current state is very old and dated … we are going to be completely changing this layout as we are extending across the back of the house to create a much bigger space.

‘Which will become a kitchen / dining area / sofa area (all open plan) with a play room separately at one end and utility room at the other end. 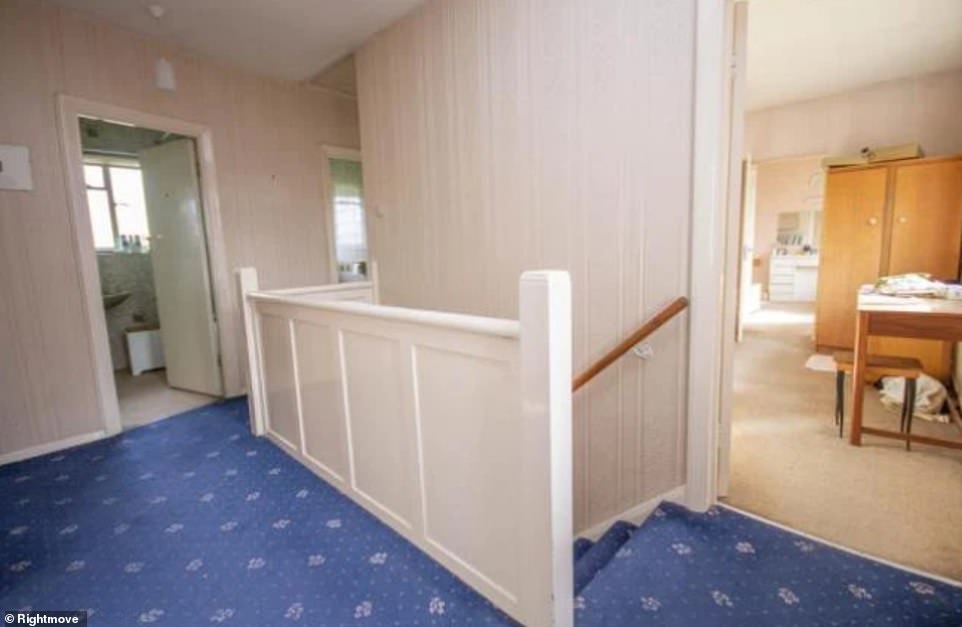 Bright blue: A blue carpeted staircase leads the way to the first floor where the house’s bedrooms are 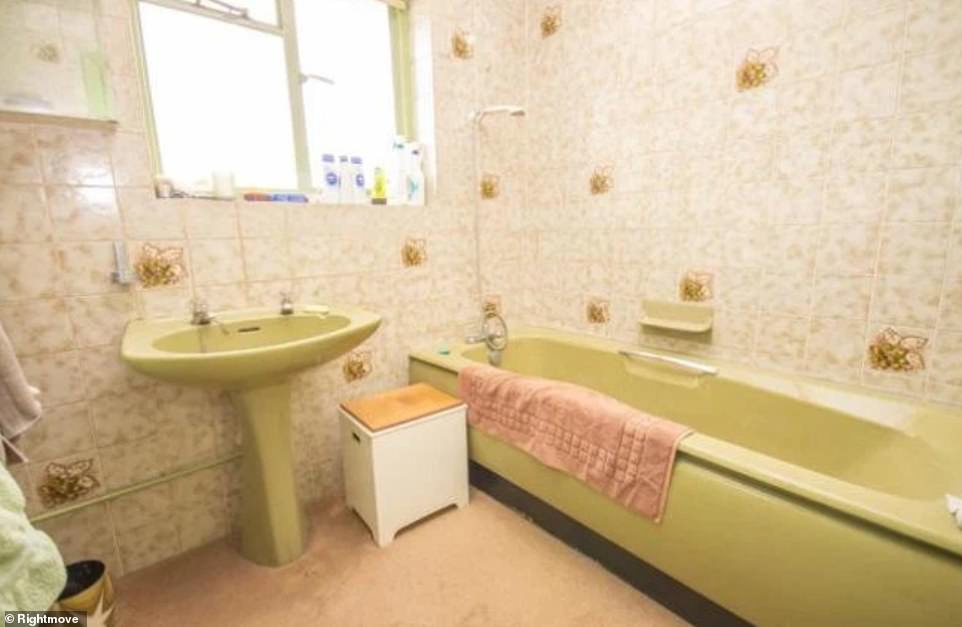 Wow! One of the bathrooms featured carpeted flooring, floral tiles and an avocado suite

‘I’ve attached some kitchen design Inspiration images from @jonathanwilliamskitchens to give you an idea of the kitchen style we love ❤️ #newhome #renovation #kitchendesign #kitchendecor #homedecor #inspiration.’ (sic).

Talking to HELLO!, she said: ‘We got the keys at the end of January but it’s a huge project, a big renovation. We are going in blind because we’ve never done it before and we are starting from scratch.

‘The architect has been in and for what we want to do, it’s going to be at least a year or a year and a half until it is safe for us to live in, so we are going to stay where we are for now.’ 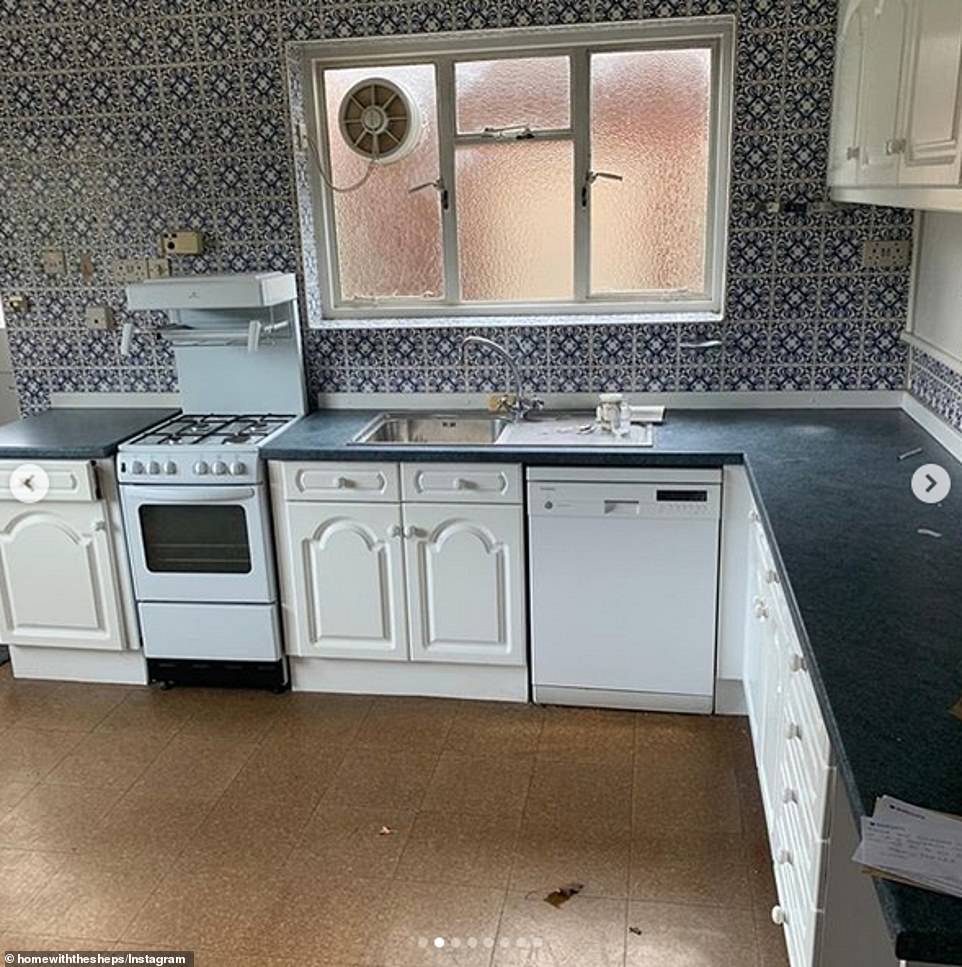 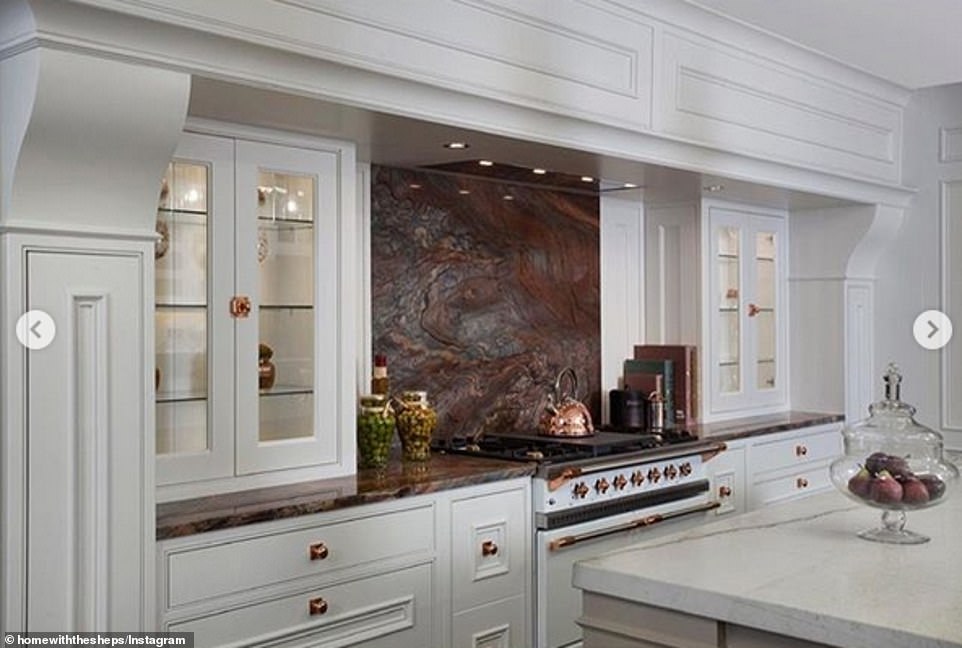 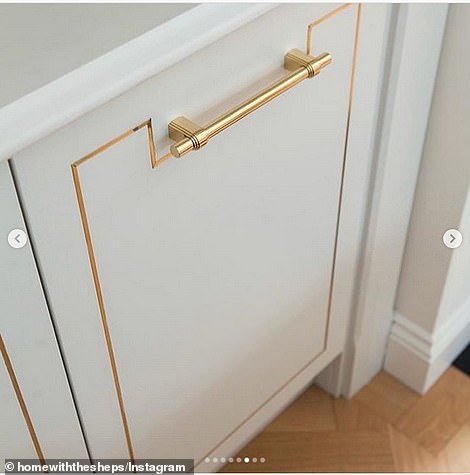 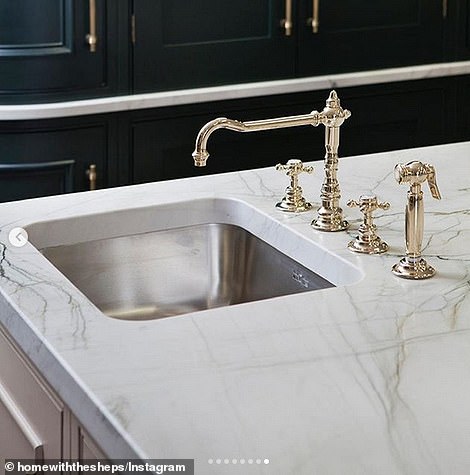