Tatt’s outrageous! The Bachelor’s Bella Varelis shows off her VERY intimate tattoo while stripping down to a bikini at Bondi Beach

Bella Varelis has shocked fans with her ‘mean girl’ antics on The Bachelor recently.

And the 25-year-old model showed off her wild side yet again on Saturday when she hit the beach in Sydney’s Bondi.

The brunette stripped down to a skimpy pink bikini – revealing a glimpse of a very intimate heart tattoo on her groin. 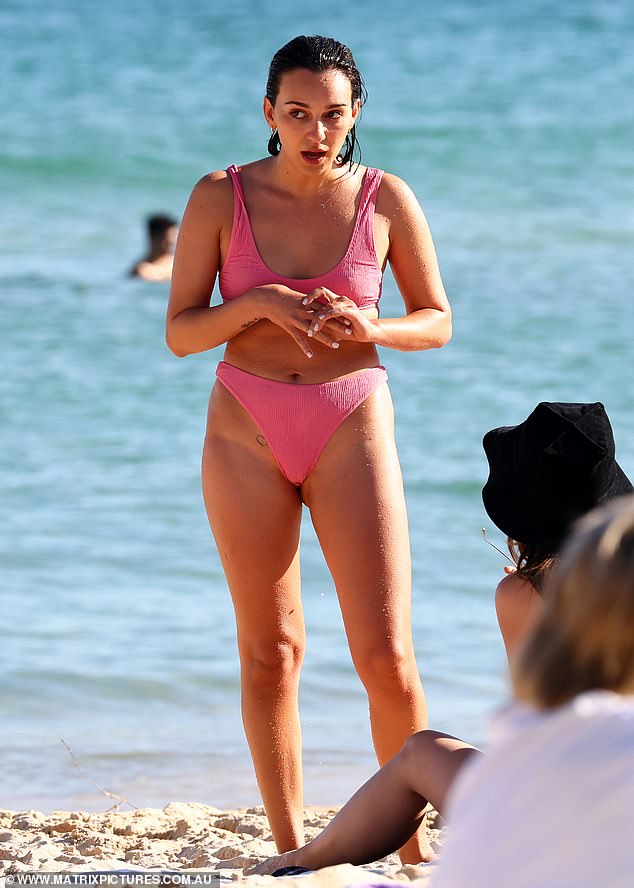 Tatt’s outrageous! The Bachelor’s Bella Varelis showed off her very intimate tattoo while stripping down to a bikini at Sydney’s Bondi Beach on Saturday

A beaming Bella was joined by her friend and co-star Bec Cvilikas, who joined the series as a post-lockdown intruder last week.

Her bikini line tattoo is an outline of a love heart. She also sports a less risqué tattoo consisting of cursive writing on her forearm.

The Instagram influencer flaunted her toned and tanned physique in her revealing two-piece, which featured a pair of G-string bottoms. 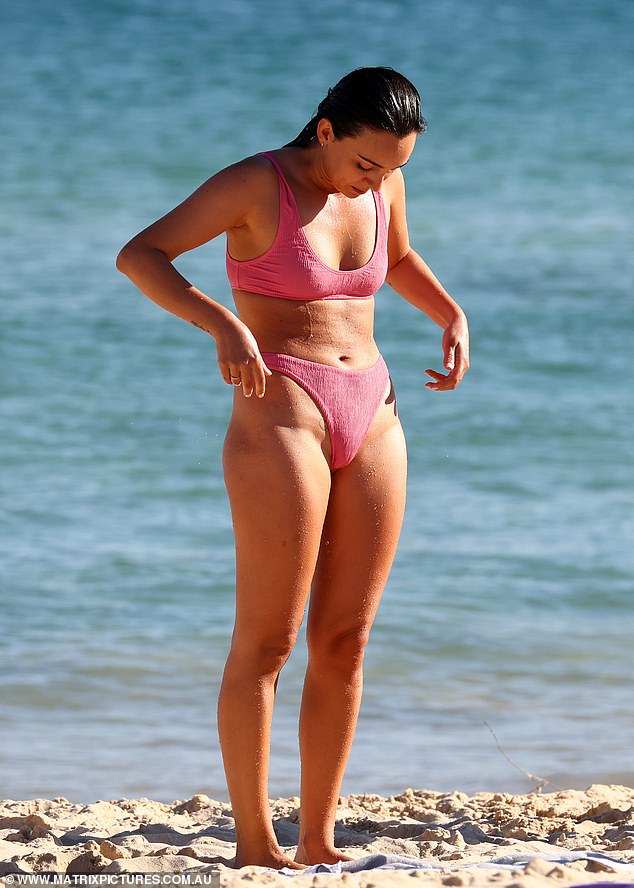 Tatted-up: Her bikini line tattoo is an outline of a love heart

Bella was seen chatting with Bec as the two women soaked up the sun. Later on, she chatted to her stepfather.

The sighting comes as Bella finds herself at the centre of drama on the show.

The marketing consultant accused her rival Irena Srbinovska of ‘manipulated her way through the show’ during Wednesday’s episode.

Fans flocked to Twitter to criticise her behaviour and labelled her a ‘hypocrite’. 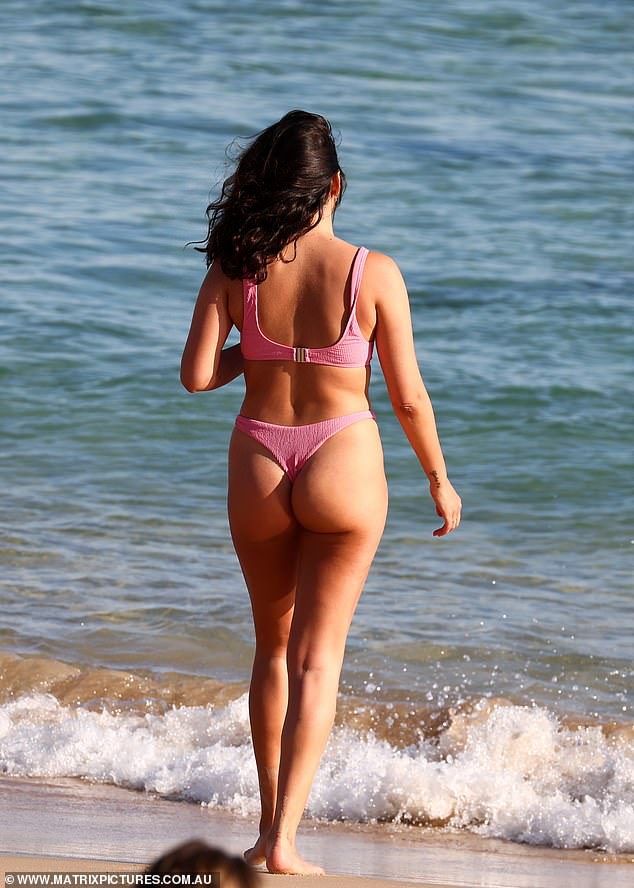 Going for a dip! Bella was only to happy to head into the water for a swim on the warm day

‘I think [Irena] has a rose because they do have a really good connection. I think she’s very good at manipulating and making herself come across as a victim,’ Bella told the other women.

‘It just sucks because both of my last relationships have been ruined because there was a girl that’s come in that’s manipulated it.’

‘And she’s doing exactly that!’ she added, breaking down in tears. 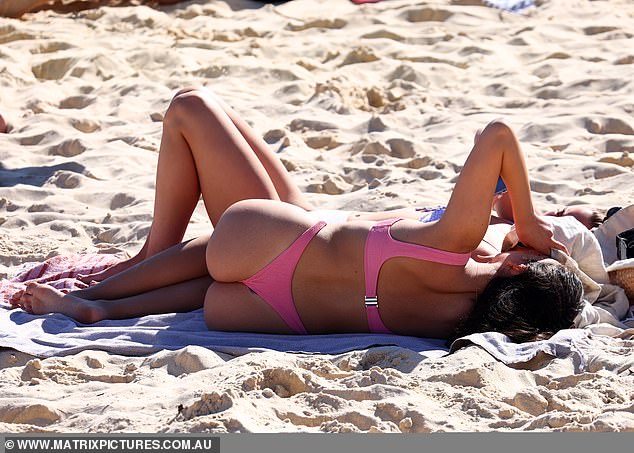 Tan lines: Bella was only too happy to soak up the sun while laying on the beach

Viewers later hit out at Bella, accusing her of being the manipulative one.

‘If anyone’s manipulating Locky now it’s you Bella,’ one person wrote on Twitter.

‘Bella has made one mistake that gets people sent home… b**chin about another person in the house!! Bye bye Bella, you used to be my favourite,’ another said.

A third tweeted: ‘Has Bella never seen The Bachelor because this always happens and never ends well?’

The Bachelor continues Thursday at 7.30pm on Channel 10 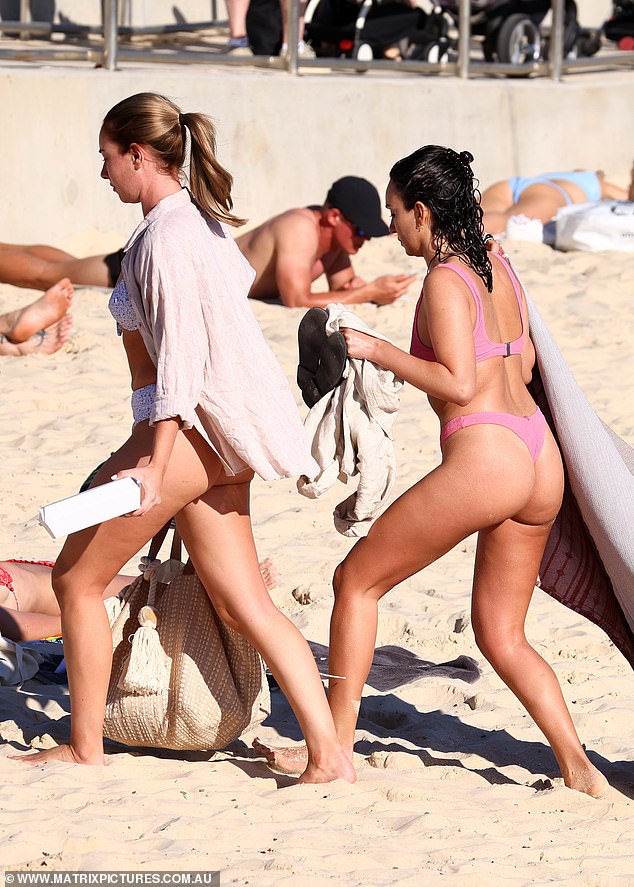 Not shy! Bella was happy to strip down to a revealing swimsuit alongside her co-star, Bec Cvilikas