Bronx Congresswoman Alexandria Ocasio-Cortez criticized long lines she found while visiting a polling site in the borough on Sunday morning to cast her own vote.

Voters had been waiting in line for several hours when the congresswoman showed up.

‘There is no place in the United States of America where two-, three-, four-hour waits to vote is acceptable,’ the Democrat said outside the site in Parkchester.

‘And just because it’s happening in a blue state, doesn’t mean that it’s not voter suppression. If we are waiting three hours, four hours, five hours, if this was happening in a swing state, there would be national coverage.’

‘Frankly, this also shows the success of early voting as well,’ Ocasio-Cortez said. ‘I will wait two hours just like my neighbors are.’

Currently there are 88 polling sites open around the Big Apple with many locations reporting lines stretching around the block as people queued early to cast their ballots since early voting began on Saturday. 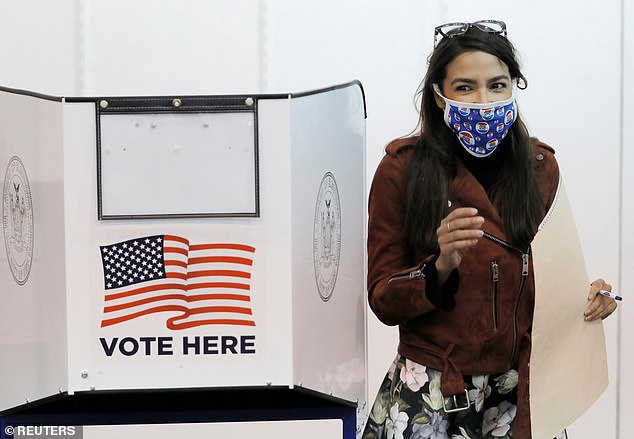 Congresswoman Alexandria Ocasio-Cortez pictured emerging from the privacy booth with her filled out ballot on Sunday at an early voting station in The Bronx, New York City 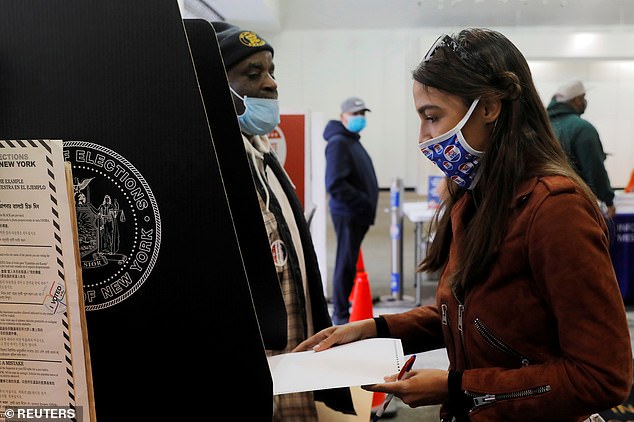 ‘And just because it is happening in a blue state doesn’t mean it isn’t voter suppression,’ Ocasio-Cortez said. ‘There is very clearly a problem. There is a lot of work to be done.

‘But that being said, I am thrilled to see how many people who are overcoming this injustice. We are going to overcome this hurdle, so that we can elect the folks that make sure this is not a problem in the future,’ the Representative said. 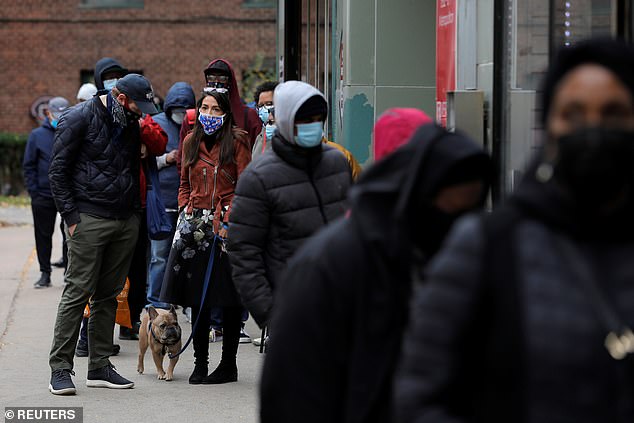 Congresswoman Alexandria Ocasio-Cortez stands in line with her partner and dog. She is said to have waited in line for two hours 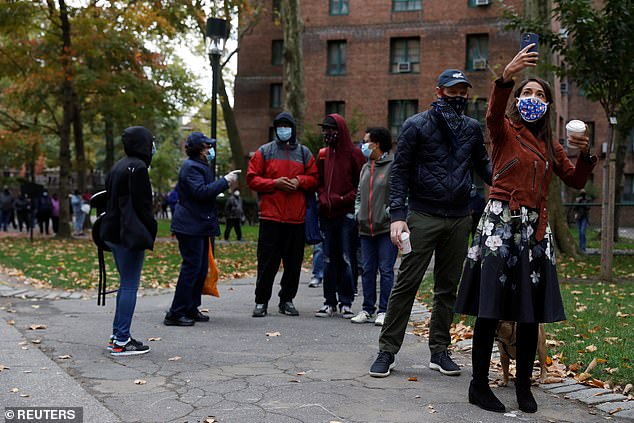 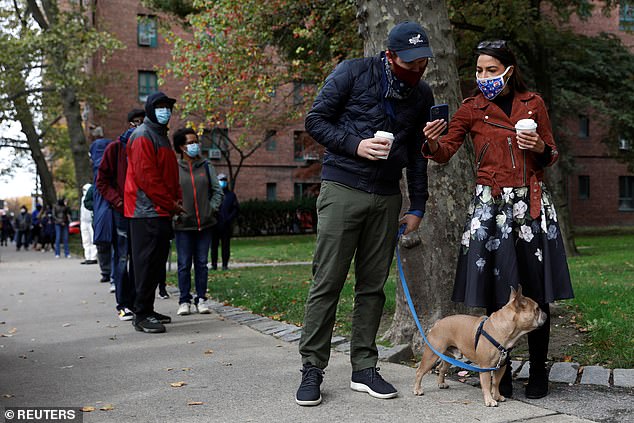 Congresswoman Alexandria Ocasio-Cortez, right, stands in line with her partner Riley Roberts and her French Bulldog named Deco as she waits to vote early in Parkchester 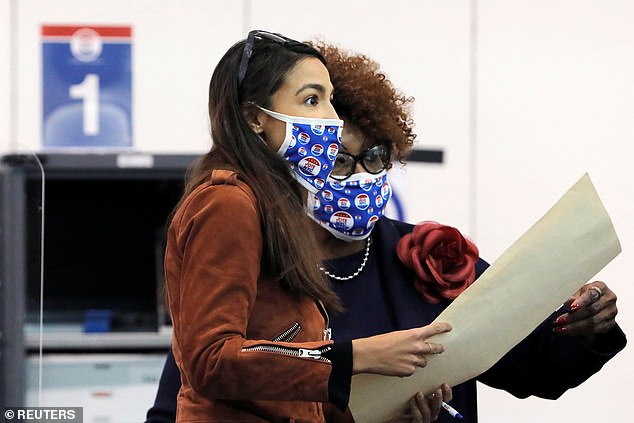 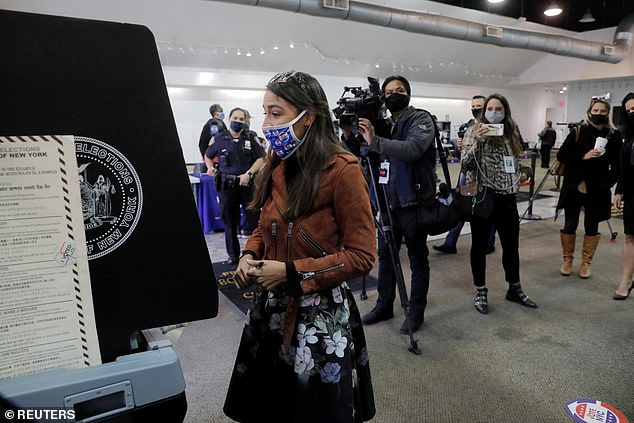 Members of the media watch on as Congresswoman Alexandria Ocasio-Cortez participates in early voting at a polling station in The Bronx, New York City, U.S., October 25, 2020. REUTERS/Andrew Kelly 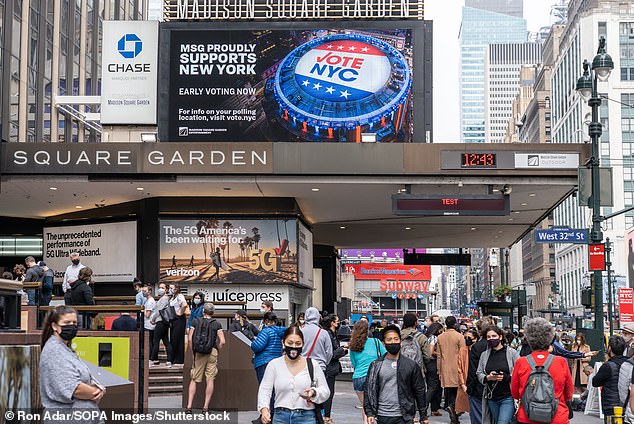 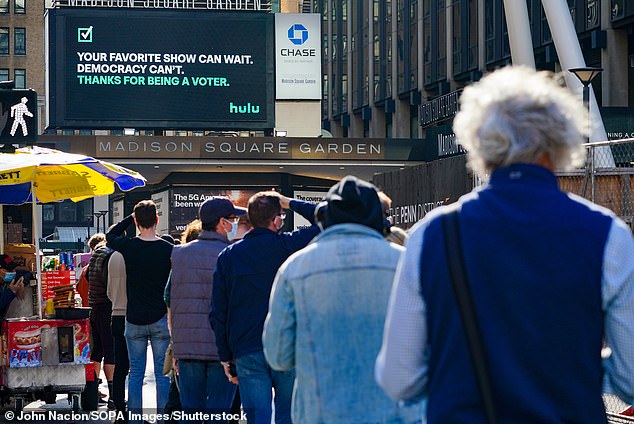 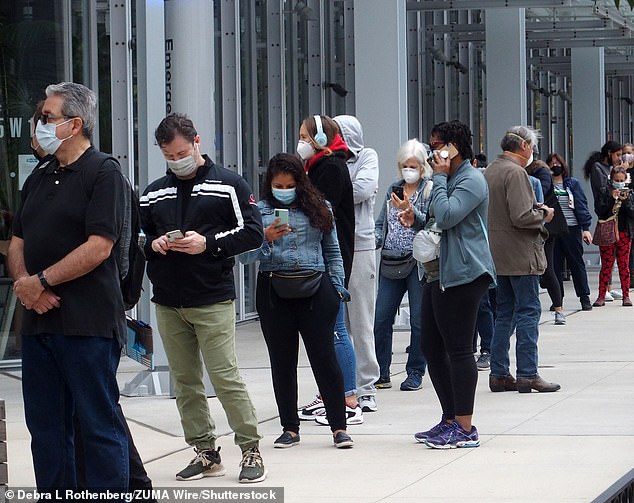 On Saturday, people were pictured waiting in line to vote early on the Upper West Side of NYC

At the 75th St polling site, the line for early voting goes twice around the block. This video took 6 minutes to film. This four hour wait absolutely should not be necessary in our democracy, but we applaud the intrepid UES voters braving the line nonetheless. pic.twitter.com/q2m9iRZJkV

The figure was almost double the total amount who took part in the nine days voting was allowed during the primaries in June.

Some waiting said lines were so long Saturday they decided to come out on day two as early as 6:30am to wait until the site opened at 10am according to ABC7.

Many New Yorkers said they were voting early because they feared fraud or didn’t trust the post office to handle absentee ballots.

The 2020 election could have the highest voter turnout in more than a century with an estimated 150million Americans predicted to cast their vote for the next president – the highest turnout since 1908.

Tens of thousands of people lined up to vote early at polling sites across New York.

Lines went around the block, sometimes several times including at the Barclays Center in Brooklyn and the Upper West Side.

Some voters at West Side High School in Manhattan on West 102nd Street were in line for four hours before they were able to cast their ballots according to Gothamist. 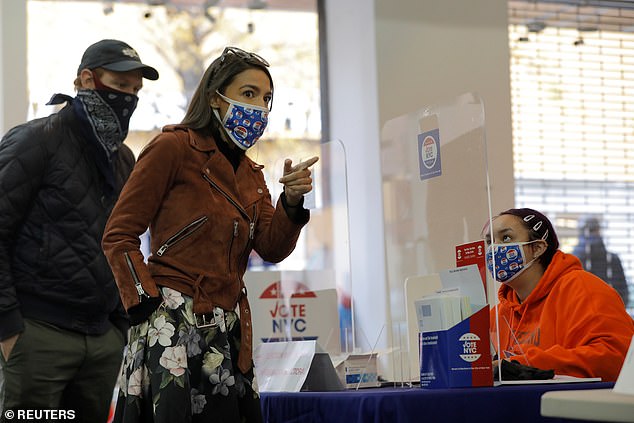 Ocasio-Cortez expressed how ’emotional’ it is to vote and a ‘privilege every single time.’ 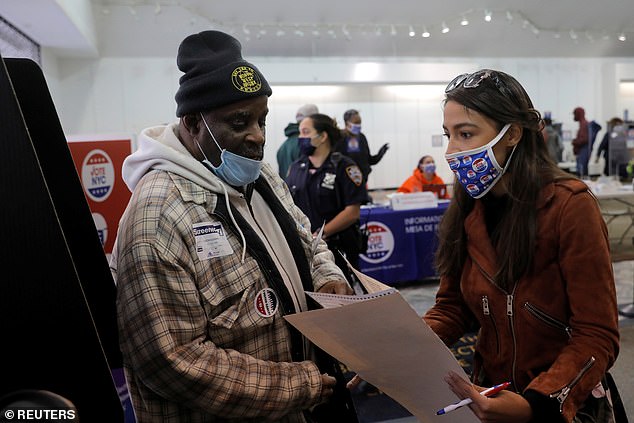 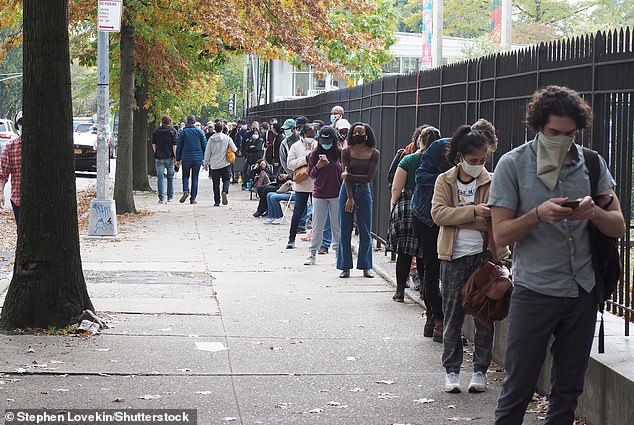 People stand in line for early voting at The Brooklyn Museum in Brooklyn, New York 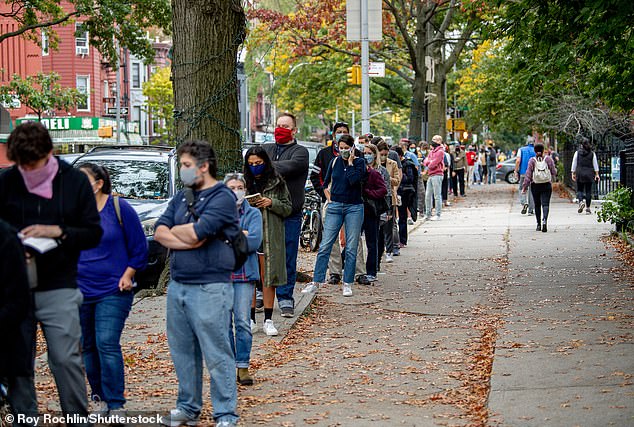 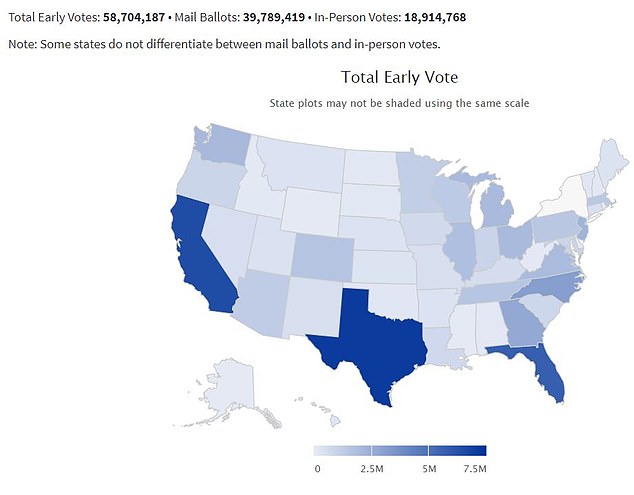 So far more than 58million Americans have already cast their ballots as of Sunday, with just nine days to go before November 3, according to the US Elections Project, with the most votes cast in Texas, California and Florida

So far more than 58million Americans have already cast their ballots as of Sunday, with just nine days to go before November 3.

University of Florida professor Michael McDonald, who administers the US Elections Project, predicts a record turnout of 150 million citizens voting in the election, representing about 65 percent of eligible voters.

This year’s high stakes race between Donald Trump and Democratic nominee Joe Biden is projected to eclipse the voter turnout of 2016, when approximately 137million people voted.

Despite challenges posed by the coronavirus crisis, swathes of Americans have headed to the polls and waited in long lines for early voting or mailed in their ballots. 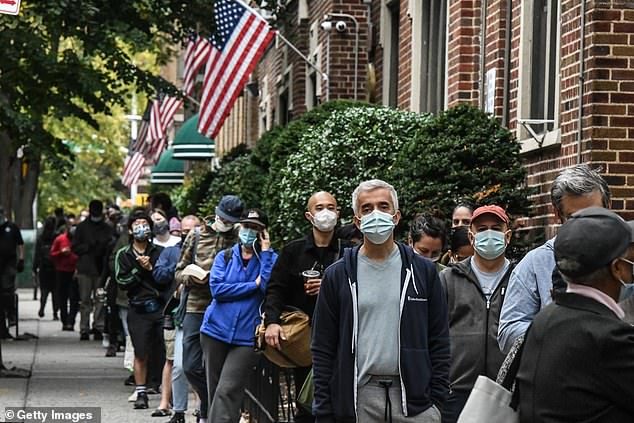 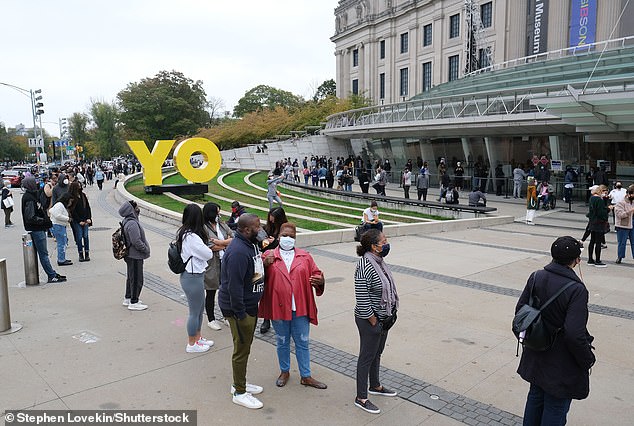 thegirlsunhttps://thegirlsun.com
Previous articleON THE ROAD: It's a day of tears as Skelmersdale book a spot in the FA Cup first round
Next articleOzzy Osbourne reveals Eddie Van Halen once called and asked him to join Van Halen

Cars were ignited by furious gangs of rioters in Paris today as thousands marched against a new law making it illegal to film...
Read more
U.S

Billionaire tech mogul Elon Musk has reportedly told friends that he plans to move to Texas, after growing weary of high taxes and...
Read more
U.S

A California personal trainer dad, 34, has been arrested for allegedly decapitating his daughter, 13, and son, 12, after cops made the grim...
Read more

Cars were ignited by furious gangs of rioters in Paris today as thousands marched against a new law making it illegal to film...
Read more

A stunned worker has captured a mysterious black object floating on the surface of the Tianchi Lake, also known as Heavenly Lake, in...
Read more
Tv & Show

They have been busy filming on socially-distanced sets during lockdown as the coronavirus pandemic continues.And Tina O'Brien was seen heading to set for...
Read more