What does travel mean to you?

Perhaps it means a margarita by a hotel pool in Marbella. Or eating an ice cream in the rain in Blackpool. Or buying a scratch card on a Ryanair flight.

To the photographers who entered the Agora #Travel2020 contest the meaning of travel is a little more… epic.

When Agora asked entrants to submit photographs that summed up what travel meant to them, 13,685 images were submitted, with subject matter ranging from the Canadian Rockies to the island of Madeira and from a fog-shrouded Bali temple to the drama of the Utah wilderness.

Competition judges whittled the entries down to a shortlist of 50 finalists before Agora users were asked to vote for their favourite and overall winner.

Octavi Royo, Agora’s co-founder and CEO, said: ‘Thanks to these photos, we can travel to some amazing corners of our planet and see them from the point of view of travel photographers.’ Scroll down to see MailOnline Travel’s pick of the shortlisted images – you’ll find the winning photo at the bottom… 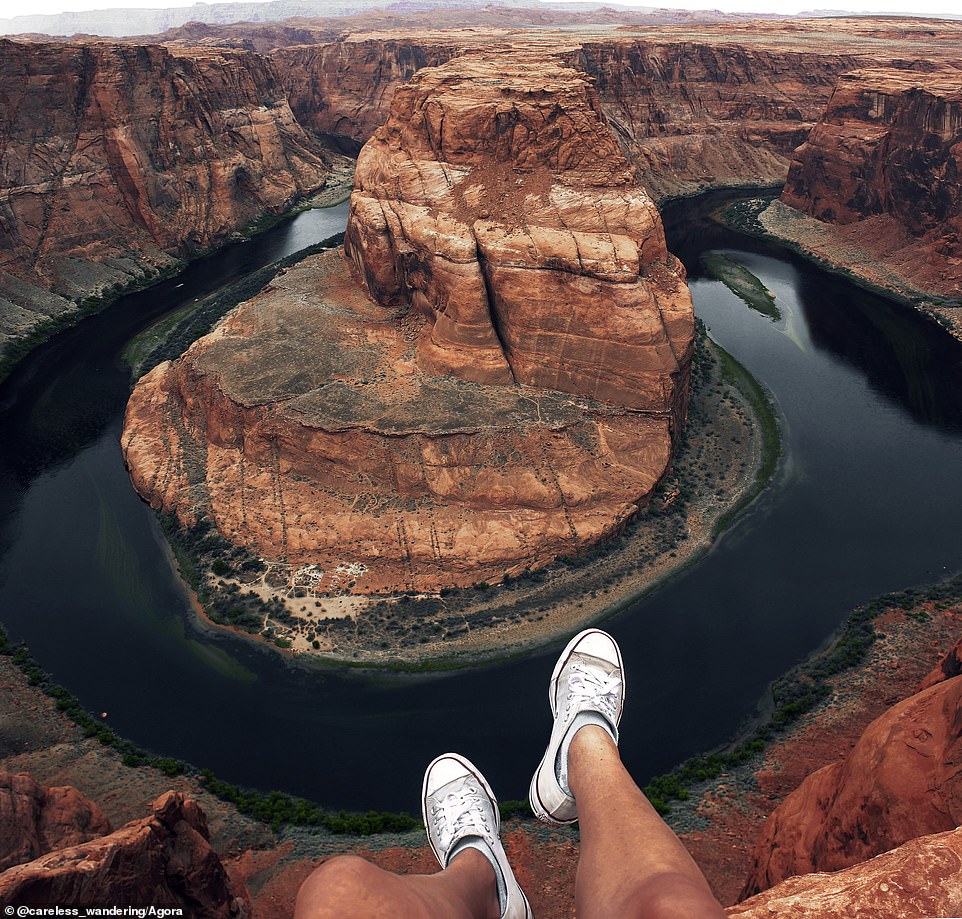 Canadian photographer Caroline Egan made the shortlist with this jaw-dropping shot of Horseshoe Bend on the Colorado River in Arizona. She said: ‘I can’t wait to visit the American southwest again. It is still probably my favourite trip to date’ 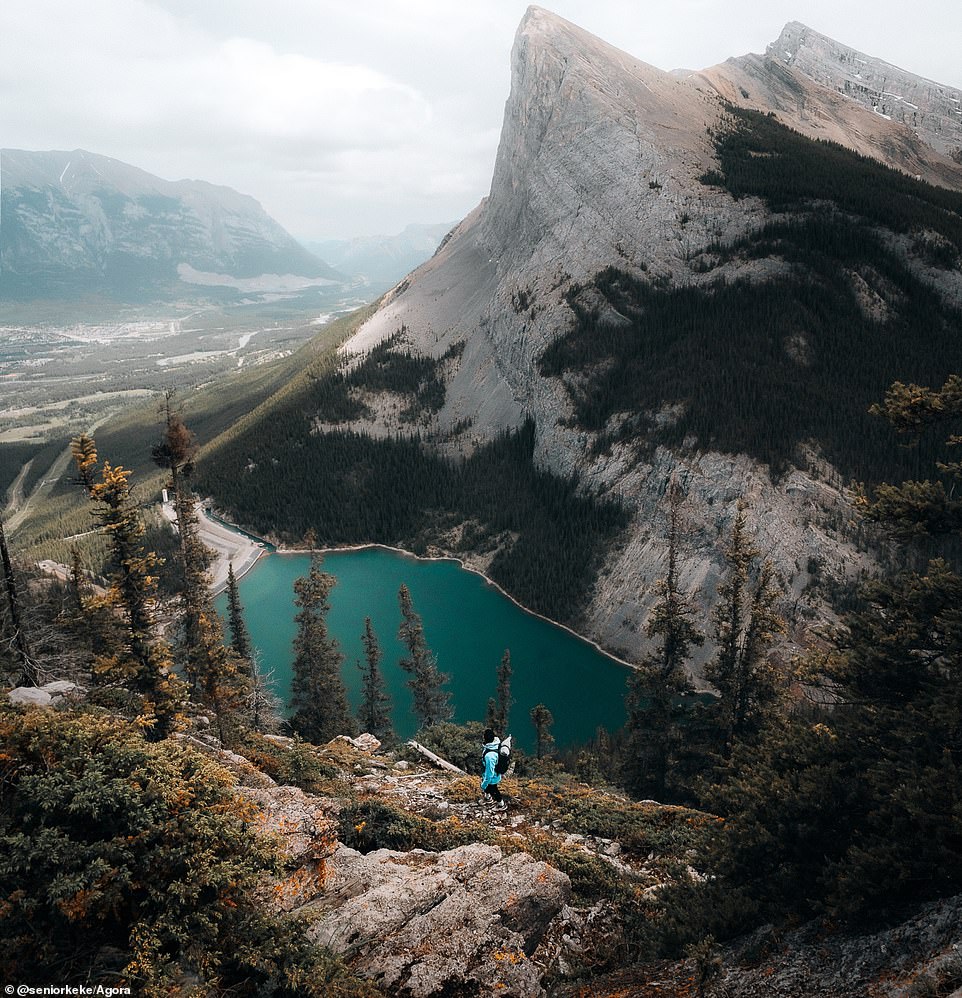 This beautiful photo shows the view halfway up Mount Rundle on the Rundle Summit Trail in the Canadian Rockies. It was shot by Canadian photographer Kelvin Lachica. He explained: ‘I wanted to show the beauty Alberta can offer. While the roads are scenic throughout the Rockies, the hiking trails are on another level of beauty. I encourage everyone to just do it. Hike the trails. Take one step at a time. It will be tough, but it will be worth it. Unfortunately, we weren’t able to reach the peak due to snow and heavy wind that day. It’s funny because it was the middle of summer’ 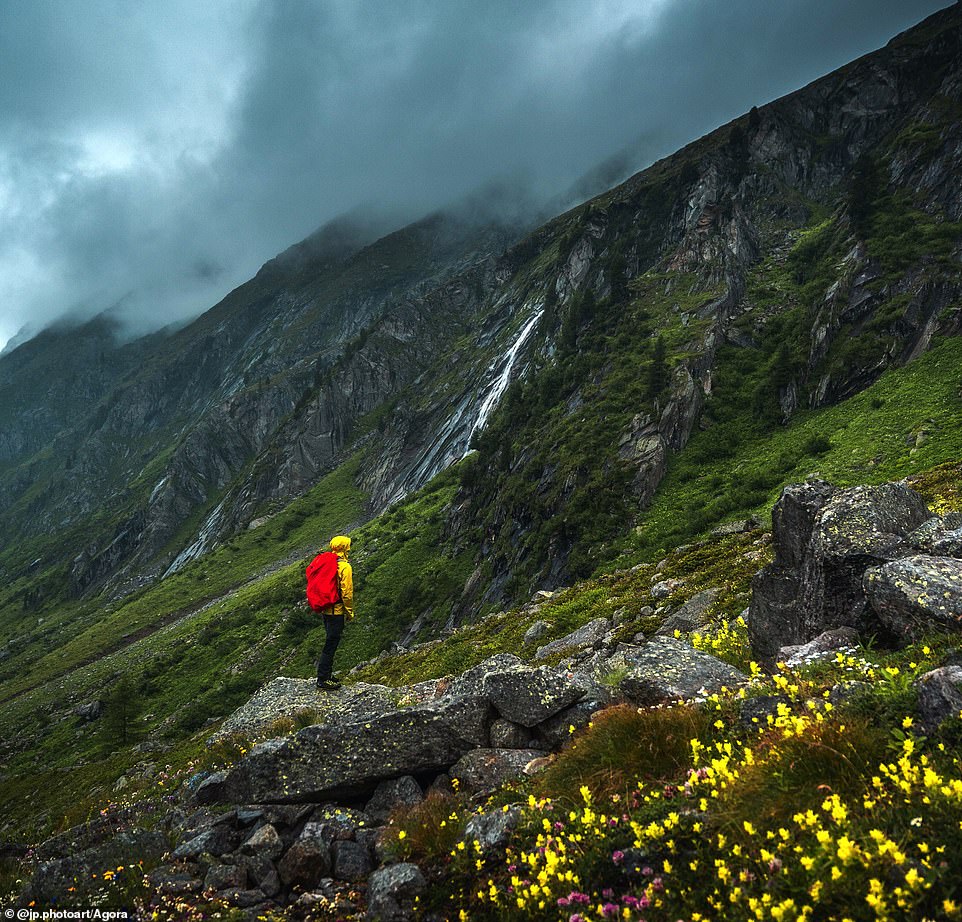 German photographer Jorg Petermann is behind this beautiful shot of the Austrian Alps. He took it while hiking. He said: ‘I already want to go back!’ 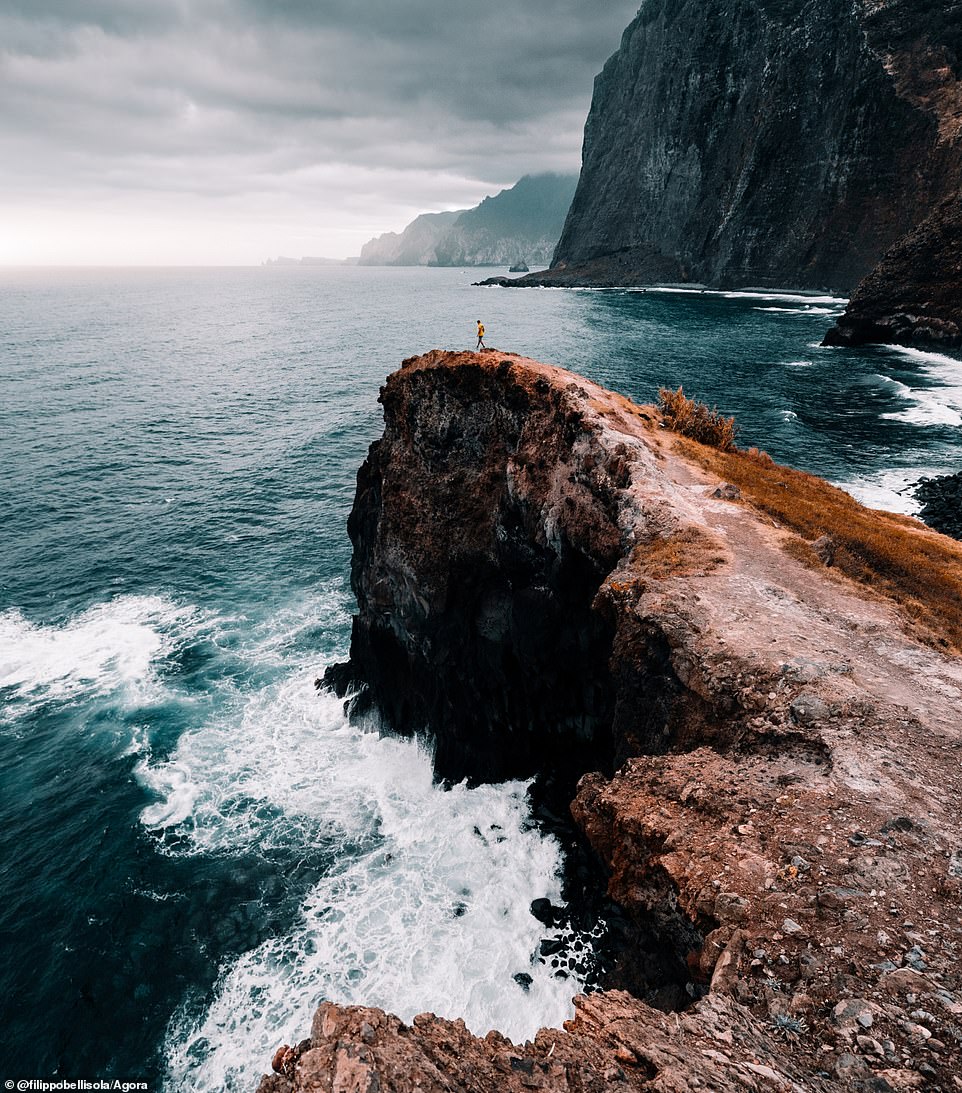 A dramatic shot taken from the edge of the village of Santana on Madeira’s northern coastline out towards the Atlantic Ocean. The photographer behind it, Italian Filippo Bellisola, said: ‘It was our last day in Madeira and I came here with two friends to catch the last sunset of the trip. The weather was not so good, but the moody sky created a very interesting atmosphere’ 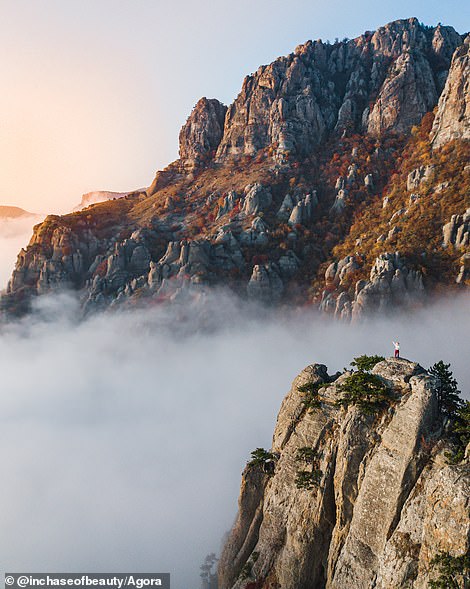 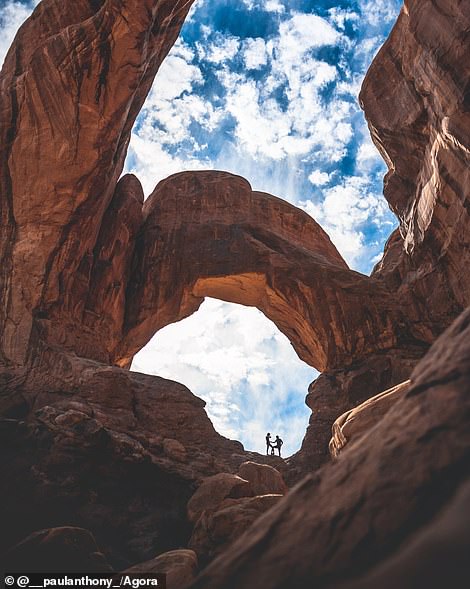 On the left is an incredible shot by Russian photographer Arthur Kanatov of the Crimean Mountains. He said: ‘The place where I had to stand to take the picture had such dangerous, sharp rocks that normal people don’t risk climbing there. But for me, these amazing views were worth it.’ On the right is an incredible shot of Double Arch in Utah’s Arches National Park. It was taken by American photographer Paul Anthony 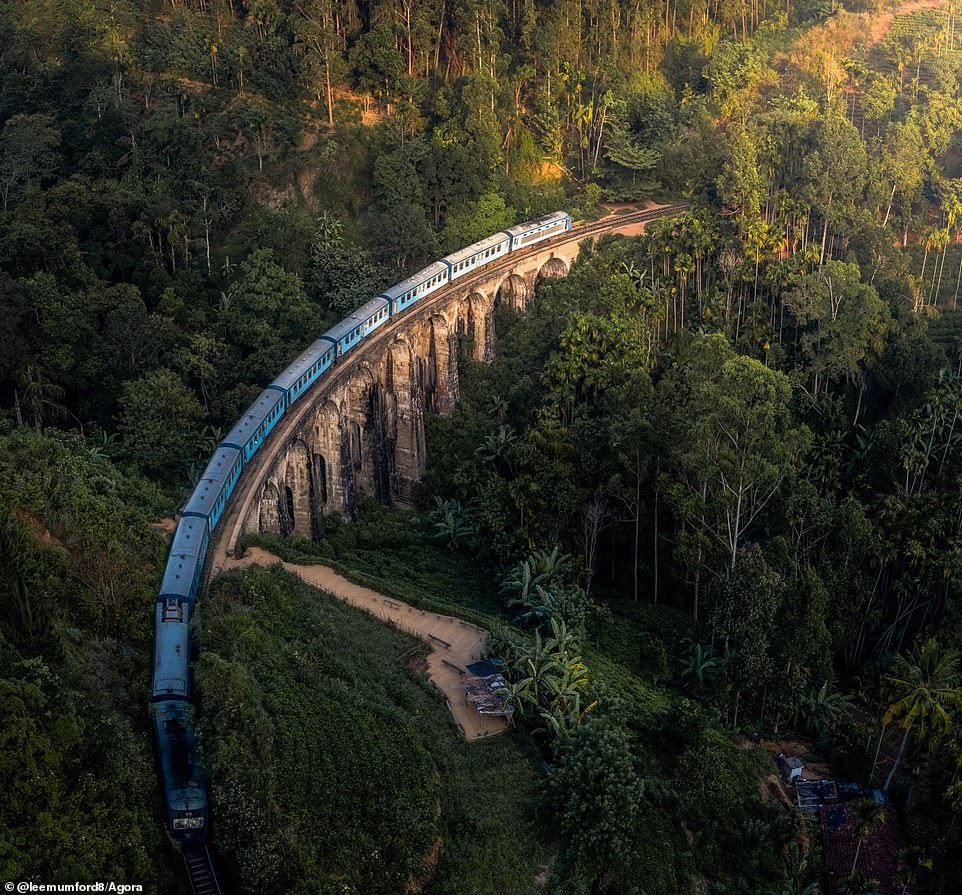 British photographer Lee Mumford used his drone to snap this stunning image of a train trundling through Sri Lanka’s epic landscape. He said: ‘I wanted to visit the beautiful country of Sri Lanka to see the iconic blue trains trundling through the lush countryside. I booked my accommodation, which had the perfect location to photograph them. It was then just a matter of juggling the time, the low light of sunrise and finding the optimal moment to launch the drone’ 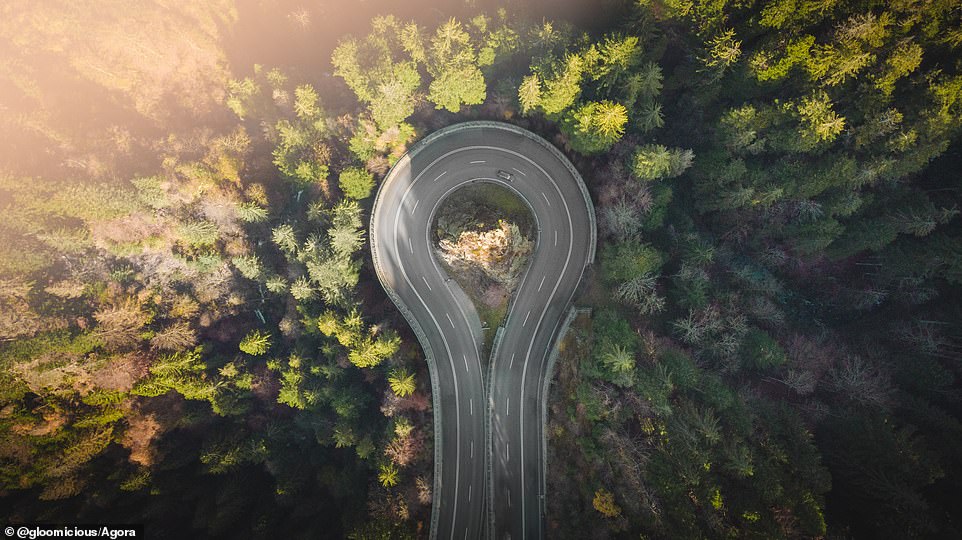 German photographer Jenny is behind this amazing shot of a hairpin bend in Germany’s Black Forest. She said: ‘The photo was taken on a chilly autumn morning. Despite its peaceful look, there was a lot of traffic on the road. It took me quite some time to get the shot with just one single car driving around the curve, but it was worth the wait’ 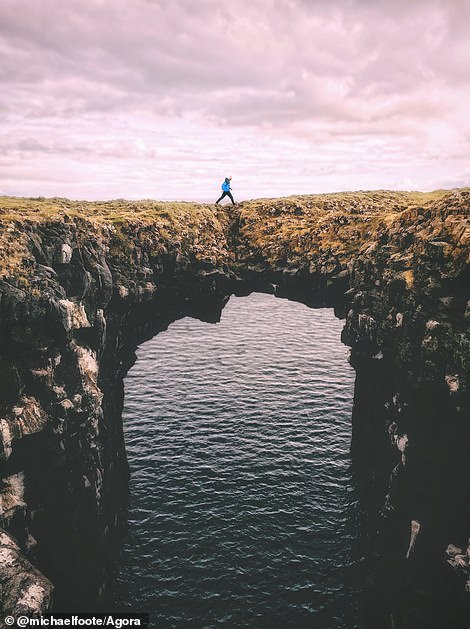 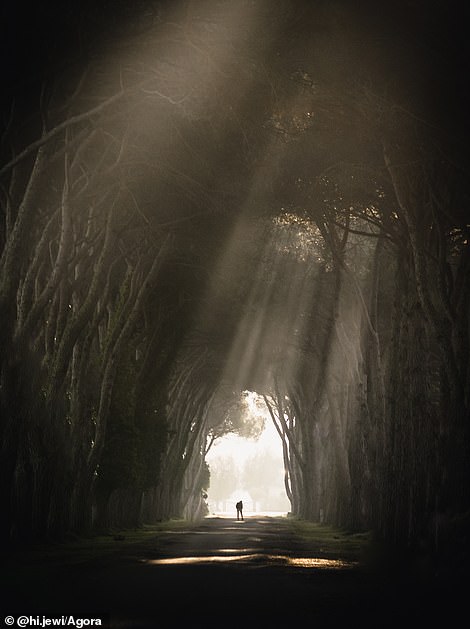 On the left is an amazing shot by British photographer Michael Foote showing the Arnarstapi stone bridge on Iceland’s Saefellsnes Peninsula. He said: ‘The bridge is a perfectly formed arch suspended above the ocean below. It’s so perfect in its formation it looks almost man-made. Venturing out across it, you feel a sense of the power flowing beneath you as the waves continue to shape the ever-changing landscape.’ On the right is the amazing cathedral of trees at the San Rossore Park in Tuscany. It was shot on a sunny morning by German photographer Jewi Rucker 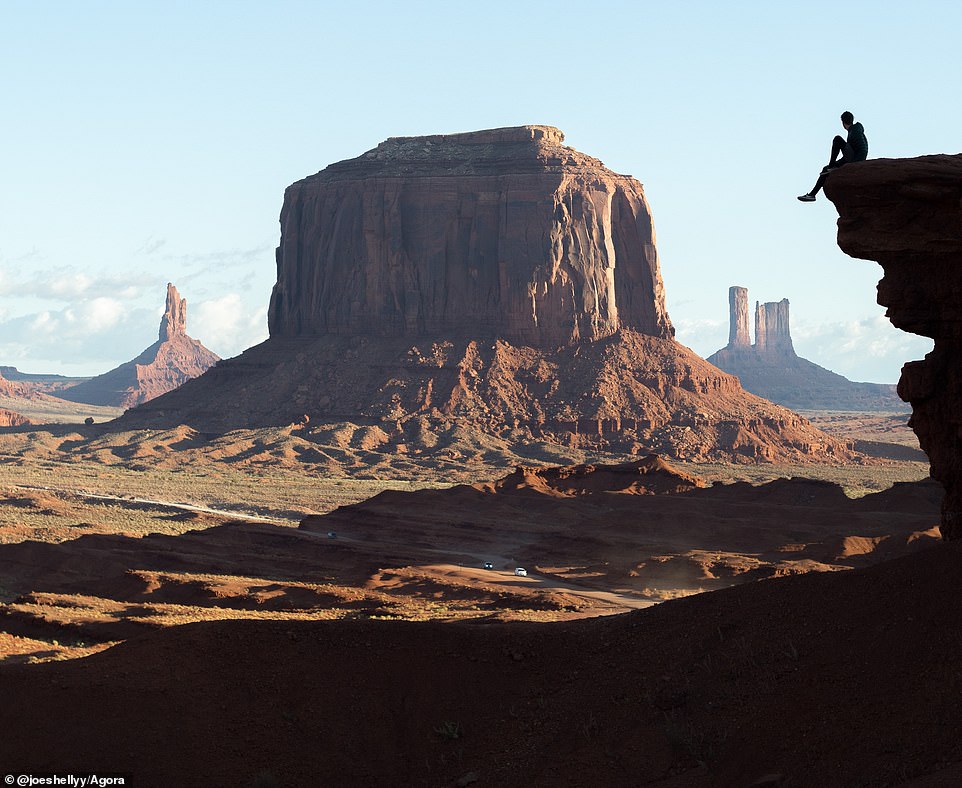 This spectacular image of Monument Valley in Arizona was taken at sunrise by British photographer Joe Shelly. He explained: ‘I wanted to find a composition that highlighted the scale of this amazing area. The morning light adds contrast to the scene.’ And the person on the ledge? That’s Joe. He added: ‘I took the image from a tripod with a timer. I was with a friend and wanted to capture a unique view of these amazing rock formations. I drew the short straw so went and sat on the ledge’ 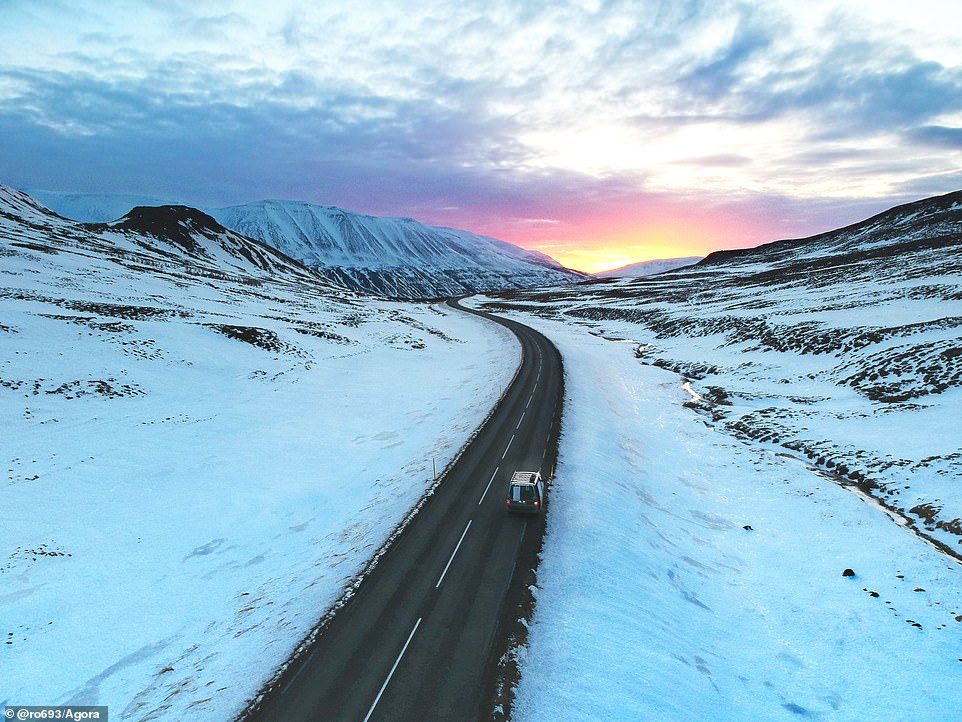 German photographer Max Dreher snapped this epic photo in Iceland. He called his shot ‘Driving Down A Lonely Road Before the Sun Rises’ 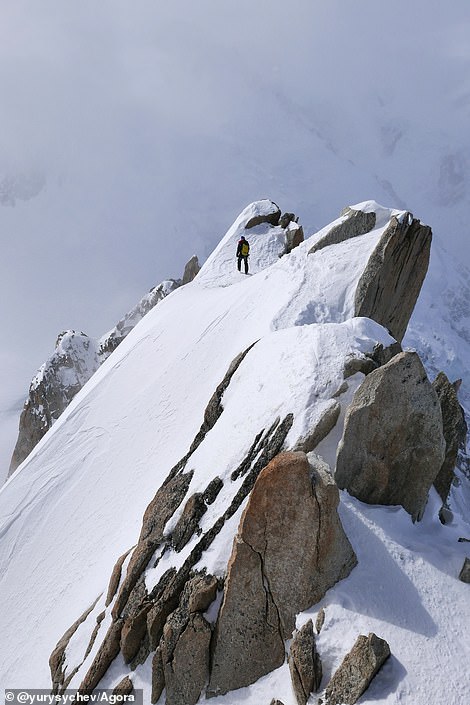 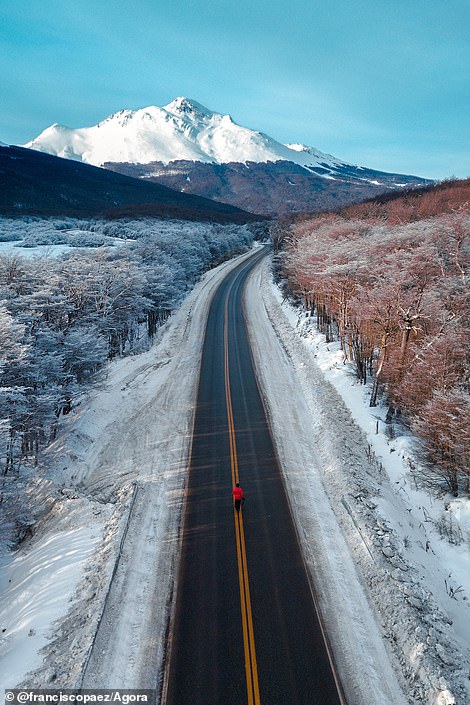 On the left is an amazing image snapped by photographer Yury Sychev in Russia. He called the image ‘To The Top’. On the right is a spellbinding drone shot taken in Ushuaia in Argentinian Patagonia by Argentinian photographer Francisco Paez. He said: ‘The lines from the road lead the eyes of the viewer into the mountain. I asked my friend to go into the road to enhance the sense of scale. This picture was taken with a drone and the battery was running out because of the low temperatures. I had to shoot as quickly as I could before safely landing the drone’ 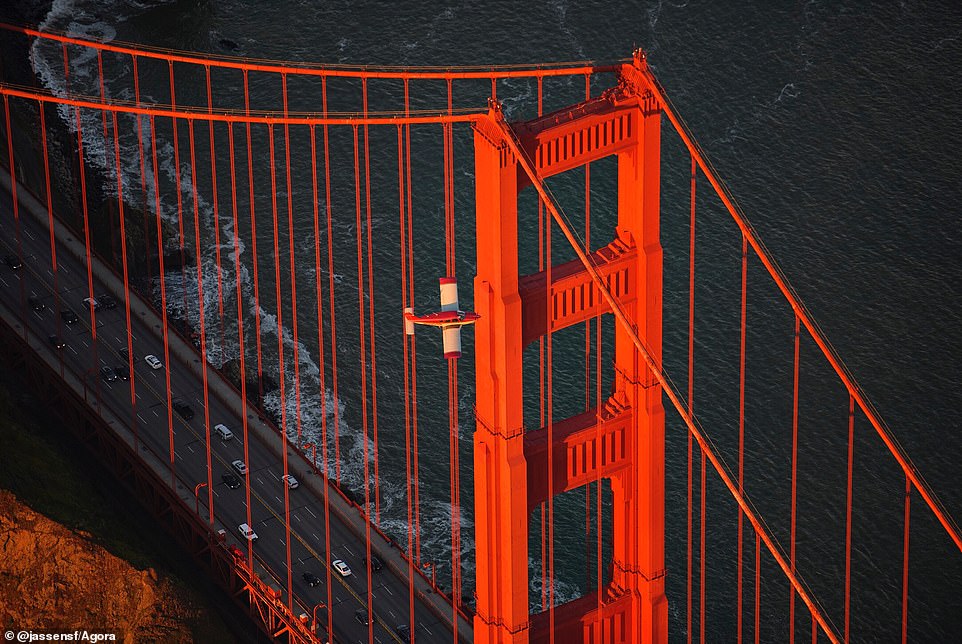 Pilot Jassen Todorov, from San Francisco, snapped this breathtaking aerial image of the Golden Gate Bridge while flying his plane at sunset. He caught a plane flying in the opposite direction, its wings aligned perfectly with one of the cables 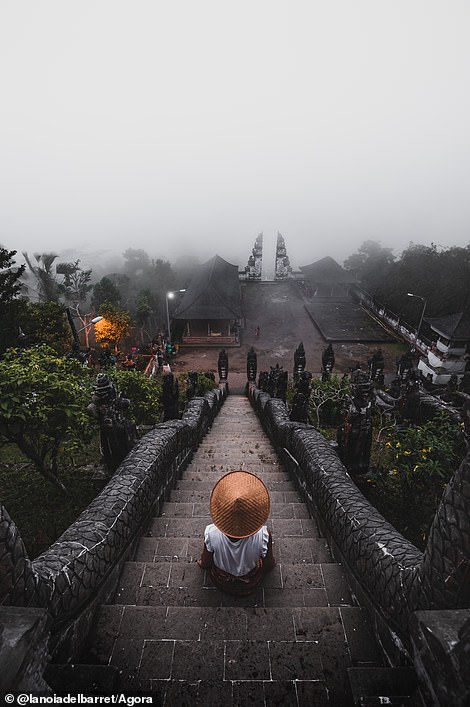 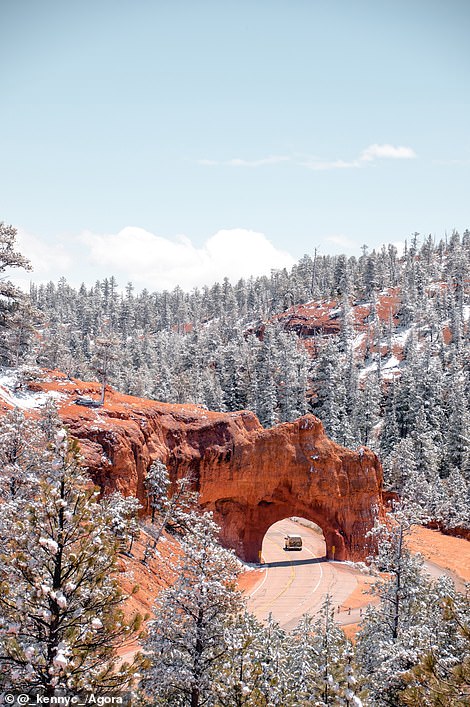 On the left is an incredible shot of a fog-shrouded Lempuyang Temple in Bali, which was submitted to the contest by Spanish bloggers Albert and Raquel, who are behind the @lanoiadelbarret Instagram account. On the right is an amazing scene captured by British photographer Kent Sampson in Utah’s Red Canyon. He said: ‘I found this gem of a spot whilst driving towards Bryce Canyon. As soon as I drove under it, I knew the shot I wanted to get. I parked up and went off the beaten path, hiking a nearby hill to try and find a good vantage point. Once I had that, I sat and waited for the perfect moment’ 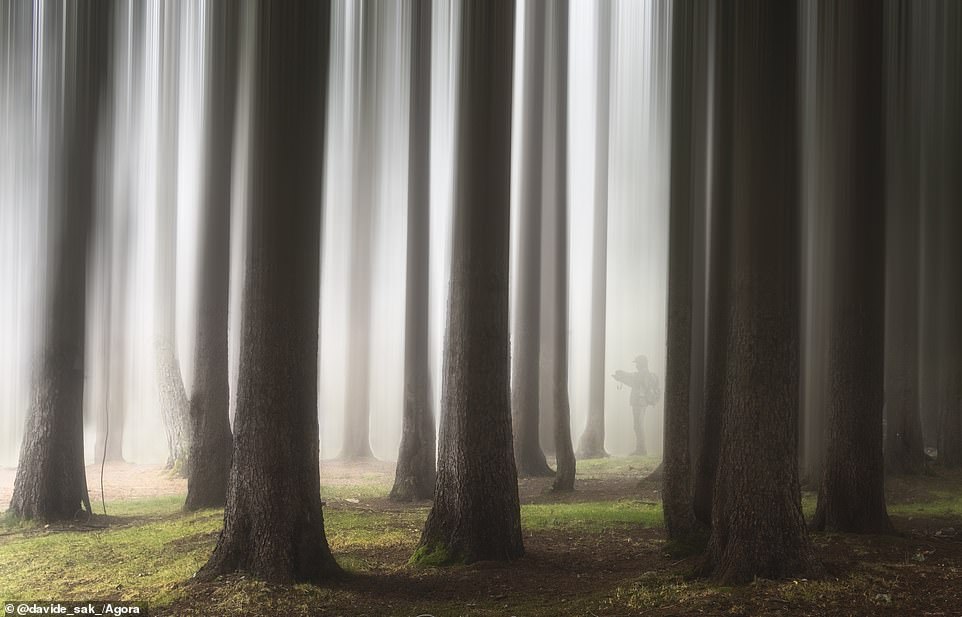 An enchanting forest near Italy’s Lake Nambino snapped by Davide Sacchet. The Italian photographer said: ‘We had just finished a tour of the lake and we were about to go back to our cars, thinking that there would be nothing left to photograph. I left the group I was with to collect some photographic equipment and the moment I looked up… boom! The whole forest had come to life’ 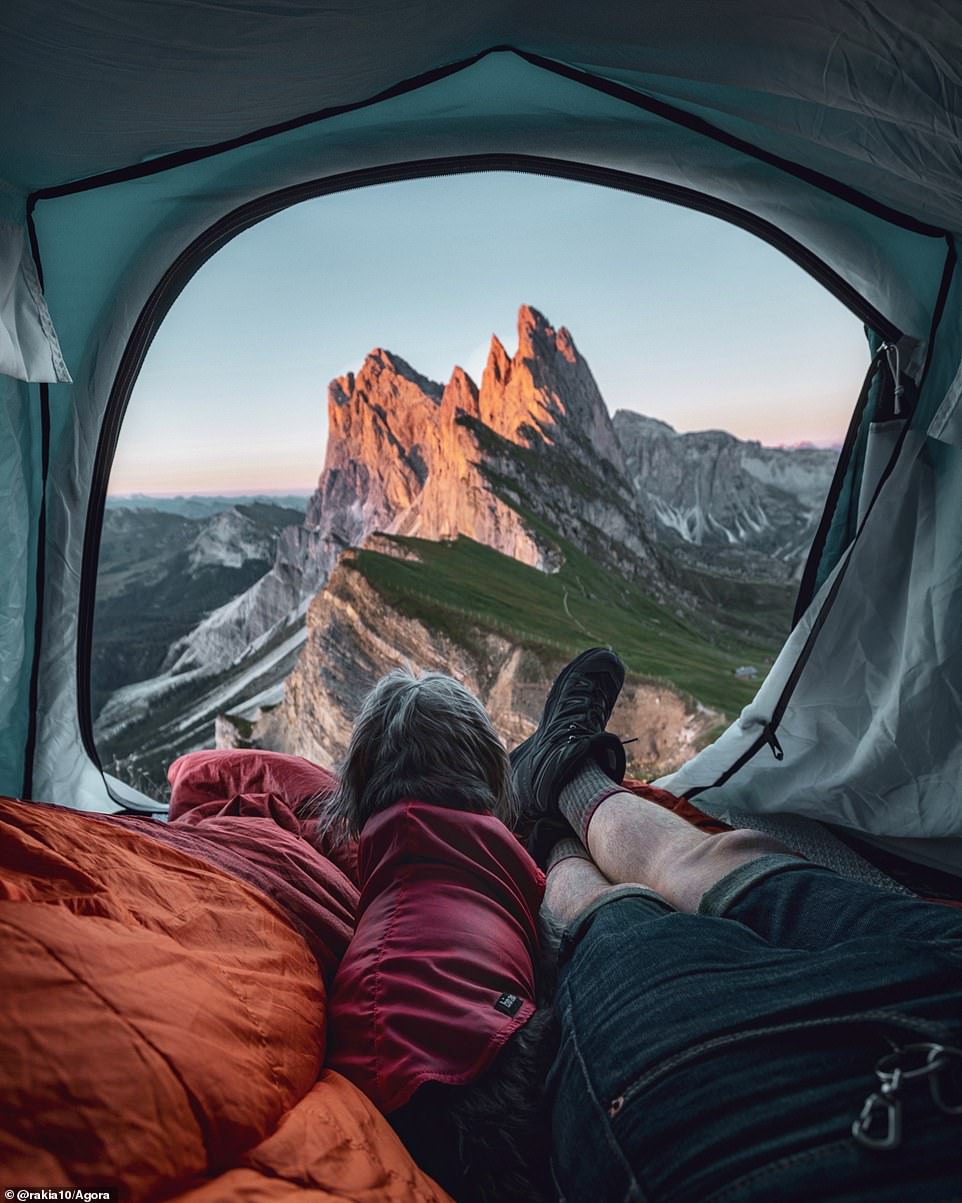 This is the overall winning image, which was snapped by Spanish photographer Brian TR. It shows the view from his tent of the 8,264ft (2,519m) Seceda mountain in the Italian Dolomites. He explained: ‘I had been wanting to experience sunset and spend the night in Seceda for a long time. I had been dreaming of this magical moment for years. I never miss an adventure with my dog, Berky.’ Brian wins the title of #Travel2020 hero as well as a cash prize of $1,000 (£773)

thegirlsunhttps://thegirlsun.com
Previous articleTruck rams cyclist off the road in Christchurch in NZ
Next articleCoronavirus UK: DR ELLIE CANNON says high risk people can decide for themselves to shield or not

The one lesson I've learned from life: Jeffrey Archer says women are superior to men

Trump 'plans to fire the heads of FBI, CIA and Pentagon if he wins re-election'

It was a deflated Erling Haaland who faced the Norwegian television cameras early on in the most recent international break. His team had...
Read more

The Bachelor's Locky Gilbert and Irena Srbinovska are accused of having...
Read more

My lightbulb moment: Skincare for tweens founder reveals inspiration behind her beauty company

My lightbulb moment: Skincare for tweens founder reveals inspiration behind her...
Read more

Spain declares new State of Emergency set to last until MAY

Cash-strapped families are wasting thousands of pounds on boiler cover